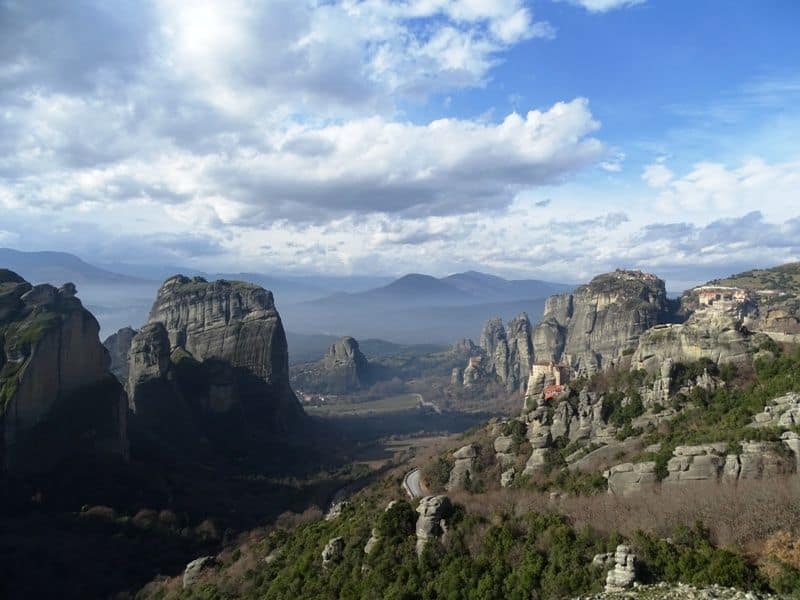 When you visit Greece there is one place you shouldn’t miss, the Meteora Monasteries. Situated in the prefecture of Thessaly, Meteora is a place of unique beauty. It is also one of the most important religious complexes in Greece. As you approach the town of Kalambaka, the nearest big town near Meteora, you will see a complex of giant sandstone rock pillars that climb up into the sky. On top of them, you will spot the famous Meteora monasteries.

Let me tell you a few historical facts about the monasteries of Meteora. At the 9th century AD, a group of monks moved into the area and lived in caves on top of the rock pillars. They were after complete solitude. During the 11th and 12th century AD, a monastic state has been created in the area. By the 14th century, there were over 20 monasteries in Meteora. Now only 6 monasteries have survived and are all open to the public.

A Guide to the Meteora Monasteries

How to Get to Meteora from Athens

There are many ways to get to from Athens to Meteora:

There are a number of one day to multiple day excursions available from Athens and other major cities in the country that include the monasteries of Meteora.

Suggested tours to Meteora from Athens

Another way to go is by hiring a taxi for as many days as you want to drive you around Greece and Meteora.

You can rent a car and drive yourself to Meteora from any town around Greece. You only need a GPS or google maps enabled on your smartphone.  From Athens, it’s 360 km and from Thessaloniki 240 km.

You can take the train from Athens and other big cities in Greece to the nearest town of Meteora called Kalampaka. For more information regarding the routes and timetable check here.

You can take the bus from many cities around Greece like Athens, Thessaloniki, Volos, Ioannina, Patras, Delphi to Trikala and then change the bus to Kalampaka. For more information regarding the routes and timetable check here.

Now once you arrive at the town of Kalampaka you can:

Some great tours include:

Note all tours pick you up from your hotel In Kalampaka or Kastraki.

For more information check out my complete guide on how to get from Athens to Meteora here.

How to get to Meteora from Thessaloniki

There are many ways to get from Thessaloniki to Meteora:

Again there are two options:

A day trip from Thessaloniki to Meteora by bus. I personally find this option the best and easiest. Firstly the tour has several pick up points in central Thessaloniki so you don’t need to get to the rail station or bus station. The tour will take you to the Monasteries of Meteora where you will get to enter 2 and make also some wonderful photo stops and then back to central Thessaloniki.

A day trip from Thessaloniki to Meteora by train The tour includes your train tickets to Kalampaka, pick up and drop off from the Kalampaka train station, a guided tour where you get to enter to 3 monasteries and great photo stops on the way.

The bus leaves from the central bus station (Ktel) in Thessaloniki. You need to catch the bus going to Trikala (the nearest big town to Kalampaka) and then take the bus to Kalampaka. From there you need to either book a guided tour to the Monasteries, take a taxi or hike there.

The train leaves from the New Railway Station in Thessaloniki and goes to Kalmpaka. Please note that sometimes you need to change trains at Paleofarsalos station. Once you arrive at the train station you need again to take a taxi, book a tour or hike to the Monasteries.

I would only suggest that you take the public transport to Meteora only if you are planning to stay overnight.

The Monasteries of Meteora

As I already mentioned there are only 6 remaining monasteries. You cannot visit all in one day as they close on different days within the week.

Founded in the 14th century AD by a monk from Mount Athos, the Great Meteoron Monastery is the oldest, largest and tallest (615m above sea level) of the six surviving monasteries. There are many important things one can see in the Monastery.

Inside the church of Transfiguration, there are fine icons and frescoes dating from the 14th to 16th centuries. There is also a nice museum open to the public. In the kitchen, the wine cellars and the sacristy of the monastery, there are bones of old residents stacked on the shelves.

The Holy Trinity Monastery is widely known from the James Bond film “For your eyes only”. Unfortunately, that was the only monastery that I didn’t get the chance to enter as it was closed the days I was there. It was built in the 14th century and the access to the monastery until 1925 was only by rope ladders and the supplies were transferred by baskets.

After 1925, 140 steep steps were carved on the rock making it more accessible. It was looted during World War II and all its treasures were taken by the Germans. There are some frescoes from the 17th and 18th centuries that are worth seeing and a Gospel Book with a silver cover printed in Venice in 1539 that survived from the loot.

Founded in the 16th century, Roussanou is inhabited by nuns. It is settled on a low rock and it’s easy accessible by a bridge. There are some nice frescoes to see inside the church.

Founded at the early 14th century the monastery is famous for the frescoes of Cretan painter Theophanes Strelitzias. Today, only one monk occupies the monastery.

It was founded in 1350 by a monk named Varlaam. He was the only one to live on the rock so after his death, the monastery was abandoned until 1517 where two rich monks from Ioannina ascended the rock and founded the monastery. They renovated and built some new parts.

It is impressive that it took them 20 years to gather all the materials on top by using ropes and baskets and only 20 days to finish the construction. Inside the monastery, there are some beautiful frescoes, a museum with ecclesiastical objects and also an impressive water barrel that used to hold 12 tons of rainwater.

Founded in 1400 AD, it is the only monastery visible from Kalampaka.  It is also inhabited by nuns and it is very easily accessible. There are some nice frescoes you can see and a small museum with religious objects.

If you are limited in time, you must absolutely visit the Grand Meteoron Monastery. It is the biggest and has many areas open to the public. In most monasteries, beware that you have to climb some steep steps in order to access them. Also, you should be properly dressed. Men shouldn’t wear shorts and women should only wear long skirts. That is why in all monasteries women are given a long skirt to wear before entering.

Apart from visiting the monasteries, there are many things to do around Meteora. First of all you should relax and enjoy the magnificent view.  There are also a lot of outdoor activities available in the monasteries like rock climbing, hiking one of the many paths, mountain biking and rafting.

Where to Stay in Meteora

Where to Stay in Meteora (Kalambaka)

Most of the hotels in Meteora are old, but there are a few ones I can recommend.

The traditional, family-run Hotel Kastraki is in this same area, under the rocks in the village of Kastraki. It is slightly older than the two previous hotels but recent guest reviews confirm that it remains a comfortable and inviting place to stay. – Check the latest prices and book Hotel Kastraki.–

In Kalambaka, the Divani Meteora is a comfortable and spacious hotel with an on-site restaurant and bar. They are located in the centre of town along a busy road, which may deter some people, but it’s a convenient location to walk into town. – Check the latest prices and book Divani Meteora Hotel.

Finally, the best hotel in the area is nearly 20km away from the rocks of the Meteora monasteries. The Ananti City Resort is a luxurious hotel and spa on the hills in the outskirts of Trikala. For travellers here to see the rocks specifically, this may not be ideal, but Trikala is the largest town in the region and a popular destination for a long weekend. Ananti City Resort is a great place to stay if you have a car.
Check the latest prices and book Ananti City Resort.

Where to Eat in Meteora

A traditional tavern located at the central square of Kalampaka. I ate there a few years ago on a previous visit to the Meteora monasteries. I had a dish of mousaka that I still remember.

Probably my favourite restaurant in Meteora. Situated at the central square of Kalampaka, this family-run restaurant serves traditional Greek dishes. The highlight is that you can enter the kitchen and choose your food. Delicious dishes and great prices.

Located in the centre of Kalmpaka it offers traditional dishes using ingredients from the area. Great portions and good prices.

Have you been to the Meteora monasteries?

2 thoughts on “Meteora Monasteries Full Guide: How to Get, Where to Stay & Where to Eat”