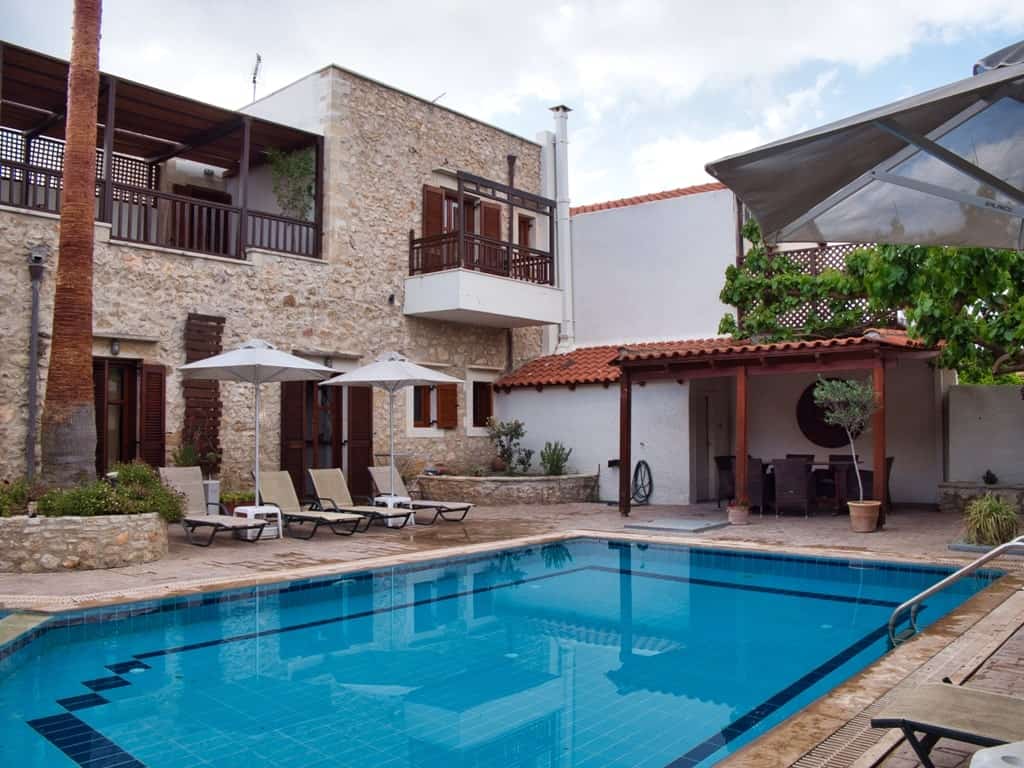 For a large group of people, a villa is often more accommodating than a hotel. You have the flexibility to cook for yourselves, explore on your own schedule, and relax in a completely exclusive and private setting. On a recent trip to Crete, my friends and I stayed at the Asteri Villa in the coastal village of the same name, which is one of four villas in the Amazing Villas in Crete collection.

My friends and I stayed at Asteri Villa, which is located at the entrance to charming village of Asteri, 3 kilometres from the Stavromenos beach and 14 kilometres from the town of Rethymno. With a spacious living and dining area, a gorgeous modern kitchen, and four bedrooms, all with their own bathrooms, we had enough space to spread out and relax.

The villa is an original stone manor house and carpentry workshop, surrounded by trees and natural Cretan landscape. Inside, rough-hewn stone walls belie the traditional character of the villa’s authentic past. Features such as the cozy corner fireplace, authentic carpenter tools and other tricks of the trade are displayed prominently around the villa, celebrating  its intriguing history. The hand-crafted wooden sofas offer another glimpse into the unique industry.

The exterior spaces are just as welcoming and traditional as the interiors. The shaded pergola, with a table that can seat 8, was perfect for relaxing late into the night with a glass of wine or dining al fresco at breakfast. The pool was a welcome amenity in the hot Mediterranean sun, and they even have a shallow kids pool for families with young children. One night, the owner Argyris cooked a special Cretan meal for us, using the outdoor kitchen and wood-fired barbecue. It was delicious!

Other amenities at Asteri Villa include satellite televisions, wifi, air-conditioning, a washer and dryer, and underfloor heating.

There are four villas in the Amazing Villas in Crete collection. Located within the picturesque village of Rethymno, in Asteri, and in Stavromenos, these villas are the ultimate in seclusion and exclusivity. Each villa offers its guests complete privacy in the midst of Crete’s most idyllic landscapes. This collection represents and respects the Cretan rural way of life, natural beauty, and rich history.

Two of the four villas can accommodate 6 people while the other two can accommodate up to 8 guests. All villas are kitted out with modern furnishings, modern kitchen and bath appliances, air-conditioning, and modern electric and wifi, as well as luxuries like underfloor heating.

You might want to check out: The best things to do in Rethymno, Crete

There is so much to see and do nearby Asteri Villa. In Asteri Village there is a lively bar and restaurant that offers live local music and dances, which was so much fun.

For daytime excursions, we found it really practical to have a car (and the villa has onsite parking for two cars). We visited the nearby Eleftherna archaeological site, the Arcadi Monastery, the Margarites village, Rethymno, and Preveli Monastery, as well as several beaches.

Eleftherna, also known as Apollonia, was an ancient city-state in Crete. Founded by the Dorians in the 9th century BCE, the city flourished under the Dorian and Roman rule, finally being abandoned after the Arab conquest of Crete. Being located on a narrow spur in the mountains allowed Eleftherna to be a natural crossroads and thus an important city of its time. Today, the vast archaeological site demonstrates its early power.

The Arkadi Monastery is a well-fortified monastery located on a fertile plateau near Rethymno. It was heavily influenced by the Renaissance, which is evident in its blend of Roman and Baroque architectures. As early as the 16th century, Arkadi Monastery was a centre of education and art, with a popular and rich school and library. The monastery attracted global attention in the late 1860s as the site of the Cretan revolt, when nearly 1,000 men, women, and children sought refuge in the monastery. Following a siege, the Ottomans finally broke into the monastery, at which point the abbot blew up the gunpowder stored in the vaults, killing most of the people on site including the women and children.

Margarites is a small village near Rethymno, known primarily for its pottery and potters workshops. It is well worth a visit, and with a car you can stay a bit later than the tour buses that arrive regularly in the summer.

Rethymno is one of the largest towns in Crete, the capital of its western district. The town dates back to the Minoan civilisation, although it really flourished under the Venetians. The old city centre, or the palia, of Rethymno was almost all built by the Venetians and remains one of the best preserved towns in Crete. Attractions include the 16th century narrow streets and traditional architecture, and the Fortezza.

Preveli Monastery, located on the southwestern coast of Crete, dates back to the late 16th century, during the Venetian rule of the island. It was likely founded by a feudal lord named Prevelis. The monks at the monastery have a long history of fighting for freedom and education, and it was during the Second World War that this is most evident.

A large number of English, Australian, and Kiwi soldiers remained on Crete, unable to leave when the Germans invaded. Against Nazi orders, the monastery and local people organized guides and safe havens for these soldiers, who hid out and were never captured by the Germans. This continued until the end of the war.

Overall my friends and I really enjoyed our stay at the Asteri Villa. I would happily suggest staying at one of the Amazing Villas on Crete for your next visit to this beautiful Greek island.

When to visit Crete

Highlights of Crete on a 10 -day itinerary

The best things to see in Crete

The best beaches in Crete

Where to stay in Crete

Things to do in Heraklion Crete

What to see in Chania, Crete

The best things to see in Lasithi.