In early December, I joined some of my fellow Greek travel bloggers for a day of exploring the Athenian food scene. Food tours, as you can tell from some of my other posts, are one of the best ways to see a new city. Not only do you get to try the local flavours, but food is a great way to learn about the history and cultural influences that shape a place. The tour we embarked on was offered by Athens Food on Foot.

We met our guide Averkios at Omonia Square, but he led us immediately into the narrow back streets of Athens’ historical centre. Our first stop was at a small sweet shop at which we tasted traditional Greek yogurt with honey and walnuts, and loukoumades. The shop is one of the oldest in Athens, having opened in 1931, and they still make the loukoumades the traditional way. Loukoumades are the Greek version of doughnuts. The sweet dough balls are deep fried and then soaked in honey or syrup. Some shops will coat them with nuts, sugar, or sesame seeds. They are utterly delicious!

Our second stop was at a corner bakery along Panepistimiou Street, which is one of the major boulevards in Athens’ city centre. It connects Omonia Square with Syntagma Square and is lined with beautiful neoclassical buildings. At this little bakery we tasted bougatsa, which is a traditional Greek breakfast pastry. It is light phyllo dough filled with cream or cheese.

From Panepistimiou, we walked through the famous arcade, the Stoa Nikoloudi to Stadiou Street. A stoa, in Greek history, is a covered promenade; the Stoa Nikoloudi houses exquisite shops, including one that sells handmade chocolates and ice cream.

Chocotopia prepares their ice cream to order, which means that everyone can have a dish completely unique to them. While the recipes are based on traditional Greek recipes, it is you who decides what fillings and toppings to put in. You can be as adventurous or as traditional as you like, with options of chocolates, fruits, or nuts. 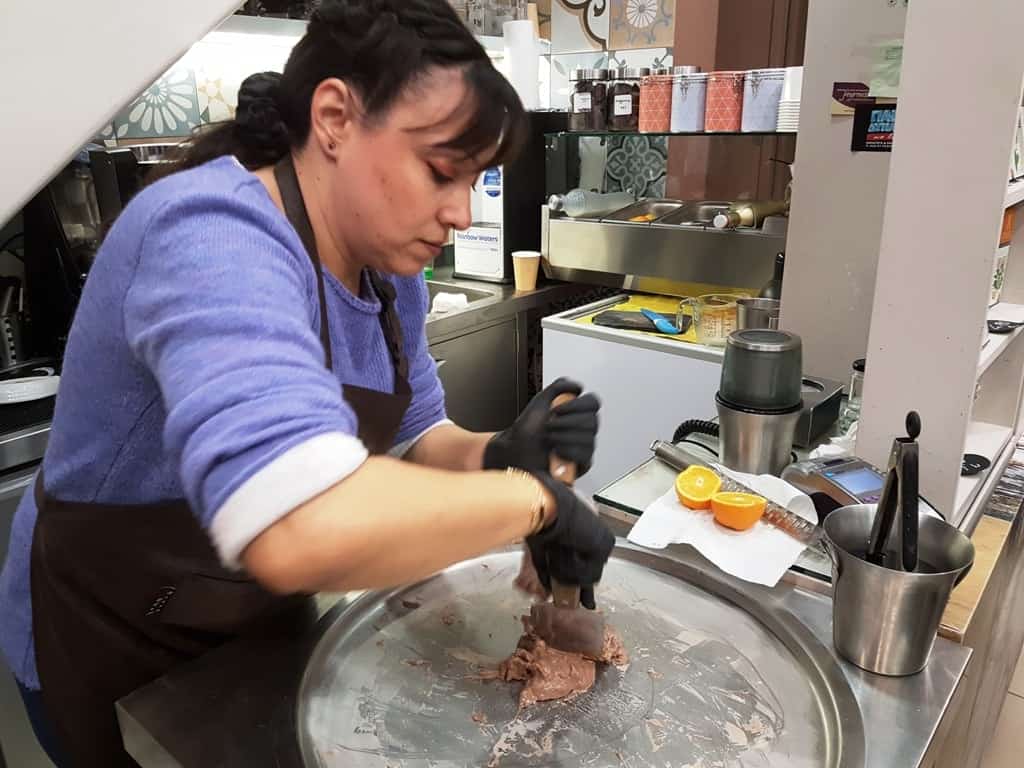 Our next stop was a small shop selling Cretan food products. Crete is famous for their cuisine, which is based on simple techniques and local produce. Every Cretan village has their own cheese, often served drizzled with a small bit of honey for a sweet taste. We sampled a variety of Cretan cheeses alongside freshly baked bread, barley rusks, and olives. Crete is also famous for their olive oil, into which we dipped the rustic bread and barley. 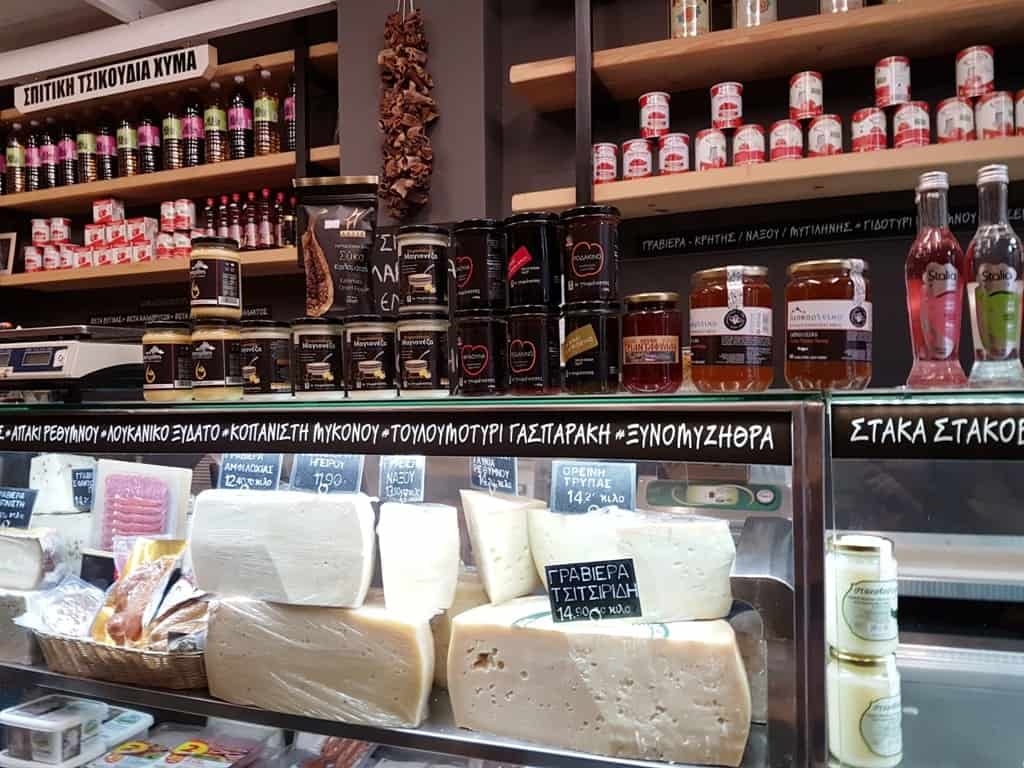 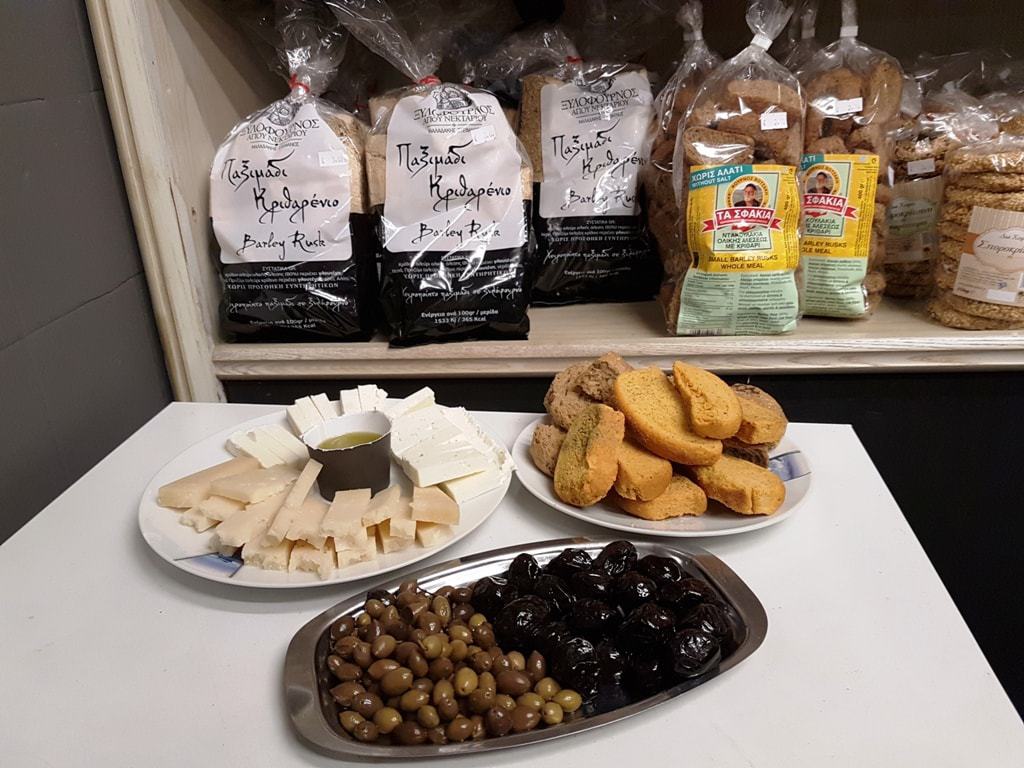 Raki, a clear brandy distilled from the grape pomace leftover from wine making, is very traditional to Crete. No Cretan meal is complete without a shot of raki, served neat with no water added, and so we capped our tasting off with a small glass. 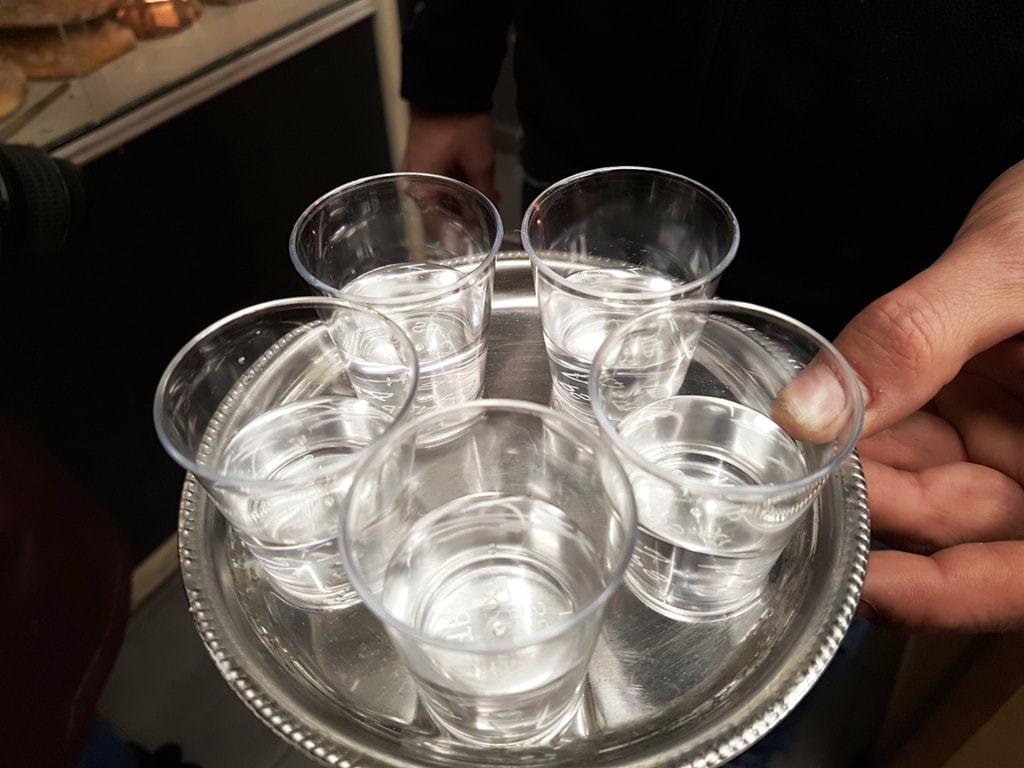 Another very important part of Greek culture is coffee. It is a ritual rather than something you gulp down in a hurry, so we headed for a traditional Greek coffeehouse. Greek coffee is prepared over either hot coals or a fire in a briki, a long-stemmed copper pot. The traditional method of preparation is to set the briki on top of sand. Underneath the sand are hot coals, and the coffee brews slowly. Only when the top is a rich, thick foam is the coffee ready. The coffee is then poured into a small demitasse cup, grounds and all. As you sip the coffee, the ground sink to the bottom. Greek coffee is meant to be enjoyed over time, in order to catch up with friends and let the grounds settle.

For lunch, we stopped at the bustling Varvakios Market, Athens’ central market where you can purchase fresh produce, fish, spices, and more. It also houses some local restaurants. One restaurant prepares a famous hearty patsa stew that many people devour after a night out. Instead of this popular dish, though, we tasted the butter beans, beef stiffado, and soutzoukakia. Soutzoukakia are plump meatballs served in a tasty tomato sauce.

After lunch, we stopped at a small shop to taste koulouri, a traditional bread ring topped with sesame seeds. Koulouri is a popular breakfast enjoyed on the go and is typically bought from a man selling them on the street.

Our second to last stop was Miran, an old restaurant famous for its pastourma, or pastrami flavoured with local spices. We sampled the pastourma, some dolma, and a few cheeses. Dolma are traditionally vegetables stuffed with a mixture of rice or grain, meat, and other vegetables; we had stuffed grape leaves. They are often served warm but can be enjoyed cold as well. 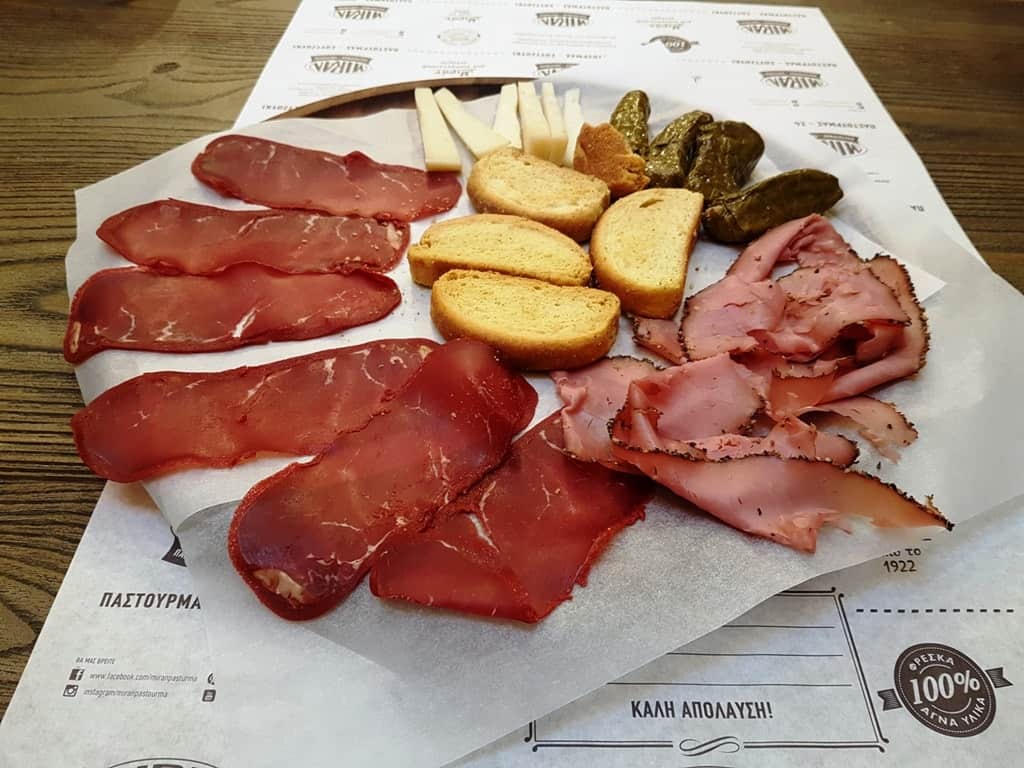 The final stop on our ultimate food tour was a little meze place, where we sampled a variety of Greek olives alongside tsipouro, which is very similar to raki. The antipasto platter had a mixture of hot meats, spicy cheese, and potatoes and was the perfect way to cap off our food tour. 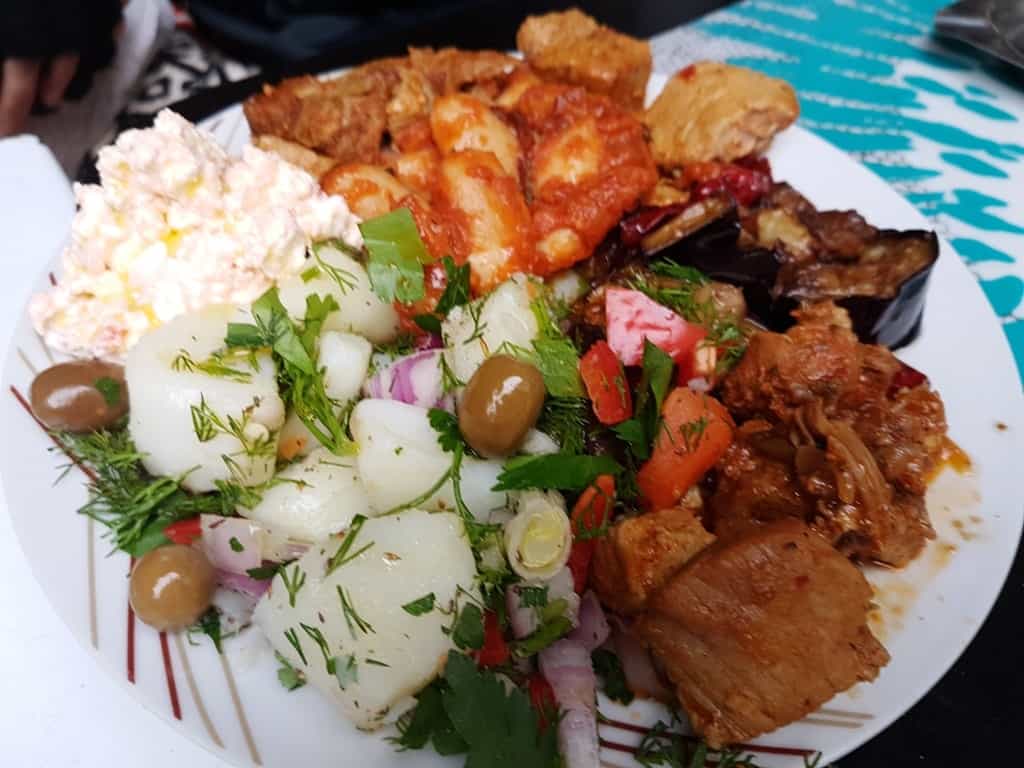 Athens Food on Foot offers several different tours, depending on your interests and your time. The Classical tour focuses on traditional foods, similar to what we tasted, while the Multicultural tour shares the international flavours of Athens thanks to the many immigrants who call this fascinating city home. The Ultimate food tour combines history with food, and the Alternative food tour includes cooking lessons in a lesser known part of the city. And while all the tours offer some vegetarian options, if you wish to partake in an entirely vegetarian tour, there is that as well. There are also tours that focus on the archaeology of the city, the Jewish culture in Greece, and a tour that combines Greek wine with the ancient acropolis. 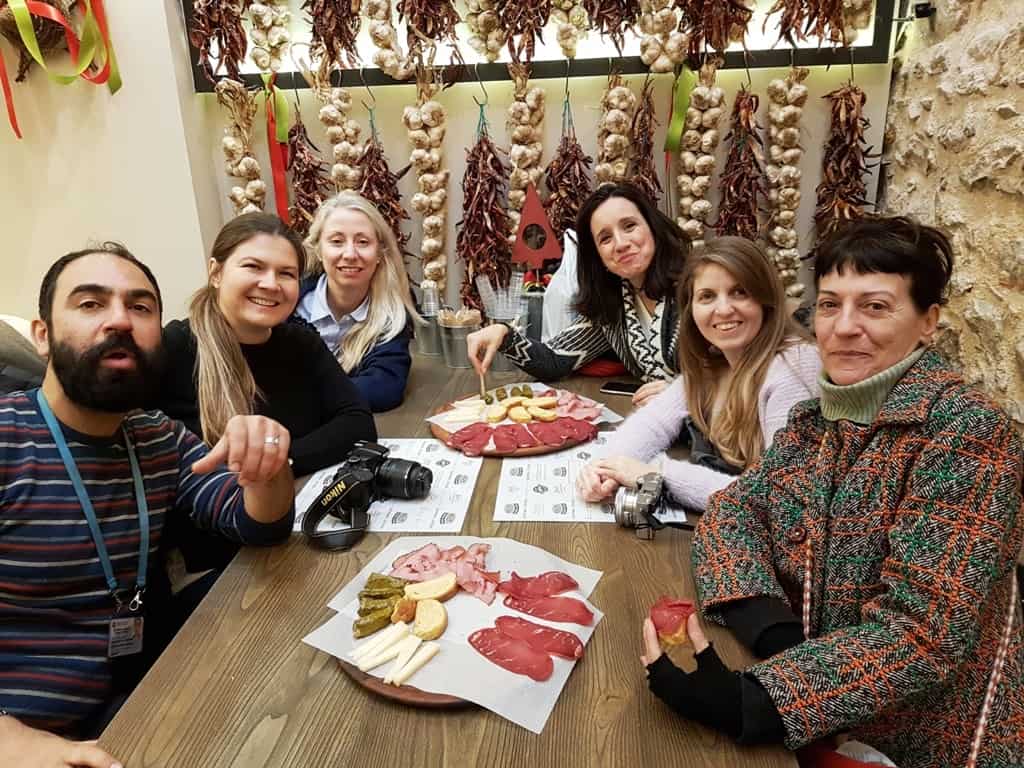 A food tour is the best way to see a new city, as you get to experience the local flavours while exploring the history and culture of a destination. Greek food, while heavily influenced by its Balkan, African, and Mediterranean neighbours, is heavily rooted in family and tradition. It is common to visit restaurants that have been passed from father to son over generations. I highly recommend the Athens Food on Foot tours for visitors interested in the history, food, and culture of Greece.

I was a guest of Foof on Foot but as always opinions are my own.

Best Places to Visit in Europe in April 2020