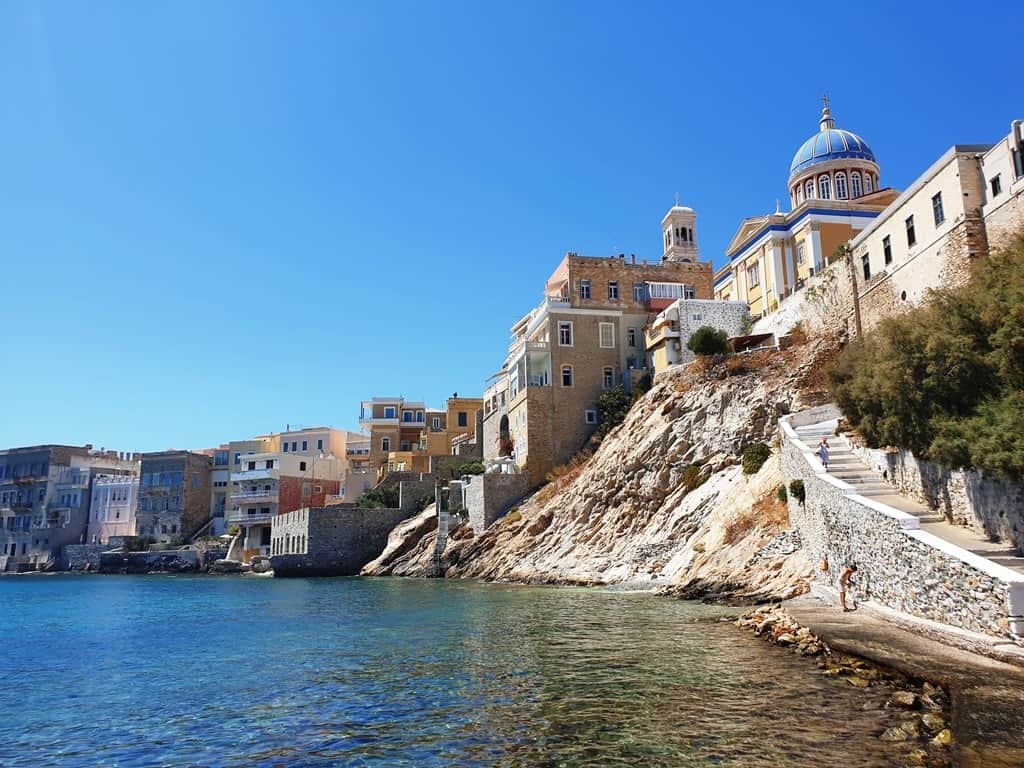 The main port of Syros Island is also its administrative capital and the main Cycladic town. Its neoclassical pastel-colored buildings and its picturesque Old Town give it an aristocratic and elegant look and a European vibe. It might seem similar to an Italian city because of its colors that differ so much from the traditional white and blue of the other Cycladic towns and villages. Ermopoulis isn’t one of the most famous Greek tourist destinations and it has kept its authentic lifestyle giving its visitors a glimpse of Greek everyday life.

A Guide to Ermoupolis in Syros

The name of the city means “city of the god Hermes”, which is rather fitting since Hermes was the god protecting all commercial affairs and Ermopoulis was a thriving commercial port in the past.

The story of the town began in 1822 during the Greek War of Independence when many rebels took refuge on Syros Island to escape the Turkish persecutions. Syros was already home to a catholic community which was protected by the European allies and it represented a safe place where to settle both during and after the war.

The town became more and more important in the maritime trades and it developed a strong industrial sector. It became the second most populated Greek city after Athens in 1856, but it began to lose its prestige towards the end of the XIX century because of the rising of the Piraeus as the main Greek port and the fame of Athens as the cultural centre of the Country.

Things to do and see in Ermoupolis

The main square is an architectural masterpiece with some beautiful buildings in neoclassical style. The most important ones are the Town Hall and the building housing the historical archive. Another highlight of the square is the statue of the Admiral Andreas Miaouli who was a hero of the War of Independence. Miaouli Square is also the favourite gathering point of locals and a nice place to spend a night out in one of its many restaurants and bars.

It’s the focal point of Miaouli Square with its huge staircase 15m wide. It dates back to 1876 and it represents the golden age of Ermopoulis. It shows 3 architectural styles: Tuscan style on the first floor, Ionic style on the second floor and Corinthian style in the towers.

It was founded in 1834 and it’s one of the oldest Greek museums. It is housed inside the Town Hall but it has a separate entrance. Opening hours: 9 a.m. – 4 p.m. (closed on Monday and Tuesday)

It was built by the Italian architect Pietro Sampo in 1864. He took inspiration from the famous La Scala theater in Milan and the first show was an opera performed by an Italian company. Address: Vardaka Square.

The most picturesque area of the city is wrapped around the port and it was the former commercial district of the island. You can still see many ancient mansions that were the residences of local rich merchants.

It is located close to Miaouli Square and it’s a nice byzantine church dating back to 1870. Inside, don’t miss a silver-plated icon of St Nicholas that was crafted in Moscow.

It overlooks the town and it’s quite scenic. It is not an old church (1908) but it shows a nice byzantine and neoclassical style.

Dormition of the Virgin Church

A neoclassical basilica dating back to the XIX century and famous for housing a painting by El Greco. Address: 71 Stamatiou Proiou Street.

It is housed inside four abandoned industrial buildings and it was intended to celebrate the industrial golden age of Ermopoulis. Address: 11 Papandreou Street. Opening hours: 9 a.m. – 5 p.m (Closed on Saturday and Wednesday).

Located inside a former warehouse, it is both a contemporary art gallery and a space for theatrical and musical performances. Address: Papadaki Street. Opening hours: 9 a.m – 2.45 p.m. (closed from Sunday to Tuesday)

The picturesque small alleys of Ermopoulis still remind of its flourishing past. For some even more picturesque views, walk until the small village of Ano Syros nearby.

The best local souvenirs are traditional handmade jewels, the famous local cheese and the loukoumia, that is Greek typical sweet treats flavored with rose syrup.

Ermopoulis has no “real” beaches, but you can still spend some hours sunbathing on:

Check out: The best beaches in Syros island.

Where to eat in Ermoupolis

Where to stay in Ermoupolis

How to get to Syros

Click here for the ferry timetable and to book your ferry tickets.