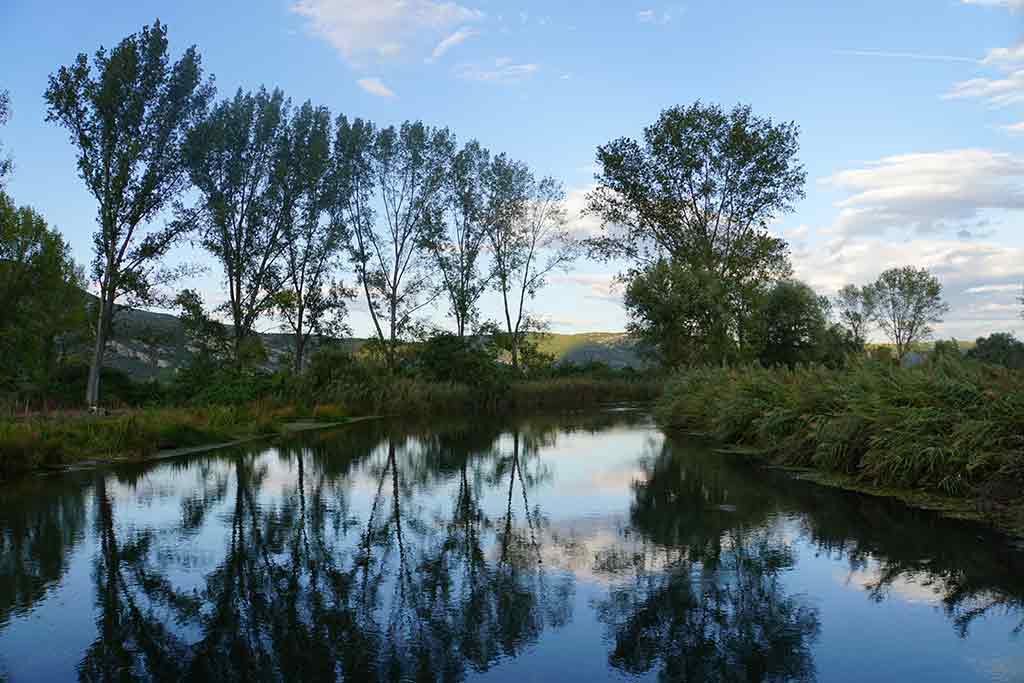 Pella is located in northern Greece, in Central Macedonia, in a mountainous and rocky area. It is famous for its apples and cherries, two fruits that grow very well in stony soil. The name Pella comes from the Ancient Greek word pélla, meaning stone, or apella, meaning stone fence.

Ancient Pella was the capital of the ancient capital of Macedon and the birthplace of both Alexander the Great and his father, Philip of Macedon. During Antiquity, Pella was a strategic port, connected to the gulf by a narrow inlet; today it is entirely landlocked. It was one of the largest and most prosperous cities in the 5th, 4th, and 3rd centuries BCE, flourishing under Cassander and Antigonus.

Pella was sacked by the Romans in the 2nd century BCE and while the city remained a capital, most of its treasures were removed to Rome. Augustus made Pella a Roman Colony, but it never fell under true Roman law and eventually declined.

19th-century explorers uncovered plenty of archaeological ruins, while modern archaeological excavations began in 1953 and haven’t stopped. The largest tomb ever found in Greece was found by a farmer in 2006; it is the grave of an ancient Macedonian family and dates to the 2nd or 3rd century BCE. Today, visitors can see the ancient city ruins, including the agora, baths, palace, and more.

Things to Do in Pella, Greece

The capital of the Pella region is Edessa, which is located in the northern part of the Central Macedonian region. It is one of the ancient capitals of the empire as well and benefits from a strategic position at the entrance of the Via Egnatia as it enters the Pindus Mountains. Edessa flourished under the Greeks, disappeared from view for a period of history, and reappeared during the 11th century. The city was fought over numerous times thanks to its location, and there are many archaeological ruins to explore.

In addition to its Hellenistic city walls and ancient military fortification ruins, Edessa is known for its waterfalls. Karanos Waterfall, the largest in Greece at 310’ high, is the centerpiece of Edessa’s Waterfall Park, located at the northeastern edge of town. The walk to the falls allows for some panoramic views of the Loggos Valley and of the waterfall. There are 11 other impressive falls within the park, all worth seeing.

The Varosi neighborhood is one of the oldest in Edessa, having formed within the citadel and ancient city. It is the original core of the city, and recent archaeological excavations have proved evidence of the old acropolis here. The traditional houses in Varosi are wonderful examples of the Macedonian architecture, while the city wall and Byzantine Castle remind visitors of the rich history in Varosi.

See the Byzantine church “The Assumption of the Virgin Mary”

The Assumption of the Virgin Mary, also known as the Byzantine Cathedral, is located within the Varosi quarter, between the archbishop’s house and the old school. Originally known as the Church of St. Sophia, the cathedral is a three-aisled basilica and was built in the 14th century, prior to the Turkish invasion, during the Palaiologi dynasty. During the Ottoman conquest, the church was renamed in order to avoid being turned into a mosque, like so many other Byzantine churches were.

The oldest frescoes date from 1380, while the newest ones are from the 17th century. The most important piece of art in the cathedral is the 18th-century woodcut icon screen by painter Apostoli Loggianou Vodenioti. And like many other Byzantine churches, the columns here reuse pieces of columns from various other churches and structures.

Ancient Edessa was the first capital of the Macedon empire, before Aegae and Pella. Excavations revealed the original city, which flourished in the first centuries BCE and early AD. For the first few centuries of the new era, Edessa had its own mint. Its location on the Via Egnatia allowed it to achieve prominence as a stronghold at the entrance to the mountains, even into Norman times and later the Nicaean empire. Like the rest of the region, it fell to the Turks during the Ottoman revolution.

Edessa’s open-air water museum consists of some of the old watermills that powered Edessa’s workshops in the early 20th century. The museum is designed to share the history of water power from the pre-industrial times to the early 1900s.

The MIll’s area and the Kannavourgio make up the museum, which includes two flour mills, grinding machinery, a water mill, and a sesame mill, complete with equipment and capable of operation. In one of the flour mills, there is an aquarium with fish from Lake Agra-Nissi in Vretta, which is the only aquarium in Greece with freshwater fish.

2. Soak at the Pozar Thermal Baths

Visit the Pozar Thermal Baths for a unique spa experience and healing waters. Located at the base of Mount Voras, the baths (also known as Loutraki Aridaias) comprise 48 individual baths, 6 indoor pools, an outdoor pool, hammams, jacuzzi, and spa therapy. There are also some outdoor activities, like hiking, mountaineering, caving, or bird-watching, in the surrounding natural wilderness.

Check out: The best hot springs in Greece.

3. Shred Some Powder at the Kaimaktsalan Ski Centre

Kaimaktsalan Ski Centre is located on Mount Voras, 40km from Edessa. From the top, 2,480m above sea level, you can see as far as Thermaikos Gulf, the peak of Mt. Olympos, and Lake Vegoritida. No matter if you’re a skier, snowboarder, or simply want to snow tube, you can do it all here. And once you’re done, you can go relax at the chalet at the base of the ski runs.

4. Rest up in Agios Athanasios Village

Agios Athanasios is a traditional stone village in the mountains at Kaimaktsalan, near the ski resort. It is a fine example of Macedonian architecture, as most of the town is comprised of stone-built houses with tiles. Agios Athanasios is considered to be one of the best and most beautiful mountain villages in all of Greece and is very busy in the winter with visitors heading to the ski slope.

Pella, founded as a port city at the end of the 5th century BCE, was one of the most important political and cultural centers in Greece. It was ideally situated near fertile land, while its strategic coastal location was perfect for both defense and merchant trading. Alexander the Great was born here in 356 BCE, while the city was beginning to flourish.

By the end of the Classical period (5th and 4th centuries BCE), Pella was a bustling city, with the new urban Hippodamian grid system (seen in Priene and Miletus, in Turkey). Certainly, the city was growing quickly under Philip I and Cassander but reached its peak in the Hellenistic period under Alexander himself.

Many of the excavations found evidence of a thriving and continuously developing city from this era, including foundations of the forum, ruins of sanctuaries, palatial complex ruins, private residences, mosaics, wall frescoes, and pottery.

The first travelers to find ancient Pella were in the 18th and 19th centuries, and not coastal as it was; alluvial deposits and river movement modified the coastline so much that Pella is 23km inland. They described the city as it related to the ancient texts. Modern excavations have unearthed much of the Classical and Hellenistic ruins. Conservation and excavation are ongoing and focus on the restoration of the site along with the importance of the region as a whole.

Visitors to the museum can see the impressive mosaic floors from the House of Dionysus, and the Abduction of Helen from the House of the Wall Plasters in the first room, which invites visitors to learn about the normal, daily life in the town. There are furniture pieces, clothing, and more. In the second room, the one that describes public life, visitors can see excavated items from the agora, like terracotta vases, coins, pottery, and more.

The third room highlights the religious, with items found in the excavated sanctuaries. Burial findings make up the fourth room, where visitors can learn about the funerary and cremation rites in ancient Greece. And, finally, the fifth room introduces visitors to Alexander the Great, one of the most important Greek rulers, and his palace.

The folklore museum is designed to promote the local traditions and history of the 19th and 20th century Macedonians who lived in the Giannitsa Lake district. It showcases artefacts like cauldrons and baking trays, adzes, and traditional clothing (both everyday wear and formalwear). The museum also highlights the late 19th/early 20th century wars in Macedonia, and the guerilla fighters who lived in this area.

Visit the protected conservation area of Vrita, which is only 6km away from the city in the Kaimaktsalan mountain region. The wetlands are one of the best places to view rare birds. You’ll see endangered species like the little bittern and ferruginous duck, and other birds like swans and moorhens. Nearby Vegoritida Lake is the second biggest lake in Greece. It’s also part of the NATURA 2000 network due to plethora of bird and fish species. You can also go kayaking, kite surfing, or sailing, or visit some of the lakeside villages.

Where to Eat in Pella

We enjoyed a tasty breakfast with homemade marmalades and pancakes with fresh fruit at the cafe – restaurant Evora in the village of Panagitsa. The cafe has stunning views over Veggoritida lake.  After breakfast, we went for a small hike nearby to see some beautiful waterfalls.

In the center of Aghios Athanasios village, we enjoyed a fantastic lunch at the family-owned restaurant Kalyves. Our menu included fresh salad, wild boar with wild porcini mushrooms and kritharoto with wild mushrooms.

After relaxing at the Pozar baths we headed to the nearby Kokkino Piperi restaurant where we enjoyed a traditional meal with local products.

If you are looking for a great place to eat near the Edessa waterfalls, the Katarraktes restaurant is a great option. The restaurant serves traditional recipes with a modern twist.

Glykanisos is located in the center of Giannitsa and serves fresh seafood, fish and other traditional dishes.

Where to stay in Pella

Hagiati Guesthouse is one of the most authentic Macedonian guesthouses in Greece. There are just seven rooms in this charming boutique hotel, all decorated with natural materials and traditional furnishings, and complemented with modern facilities.

The Leventis Art Suites are located at the foot of Mount Voras, near the ski escort and the Pozar thermal baths. All suites are intricately decorated with frescoes, hand-painted ceilings, rich brocades, and more. They are furnished with antiques, period lights, traditional carpets and fabrics, and plenty of art.

In addition to the hotel’s architecture and sculptures, they also have a private museum with over 2,000 exhibits, including a huge selection of cameras. If you cannot stay here, you should go for a coffee simply to admire the works of art.

How to get to the area of Pella, Greece

The closest big city with an international airport is Thessaloniki (around 40 km depending on where you are going).

The best way to explore the area is to rent a car. Alternatively, you can get to some of the above-mentioned destinations for example Edessa by public bus (ktel). For more information check their website here (unfortunately, only in Greek)

Pella is a unique region of Greece, one far removed from the bustling city of Athens or the hypnotic Greek Islands, but it is as ancient as the ground itself and a trip here will introduce you to the wonders of the traditional Macedonian lifestyle as well as the rich history and wide experiences in the northern Greek regions.