Greece is famous around the world for its wines and spirits like ouzo and raki. Over the past years, serious efforts have been made in the production of local beer and with great results. Local microbreweries opened around mainland Greece and the islands offering a wide variety of beers with different aromas and colours.

I am a big fan of beer, and whenever I am given the opportunity, I try to taste a new one. So when I  found out that Manas Kouzina Kouzina has the largest collection of micro- brewery beers in the city I decided to take my friends and go.

Manas Kouzina Kouzina is a restaurant in the heart of Athens and specifically in Agias Irini’s square near Monastiraki. It serves traditional Greek food from specific regions around the country. Apart from the largest collection of Greek beers they have a variety of Greek wines and spirits.  Everything that is served in Manas Kouzina Kouzina is produced by small and medium producers around Greece.

After ordering some food to go with the beer, John Spathas told us a few things about the beers in store and helped us decide which ones to taste.

Here is a list of the Greek beers you have to taste in Greece:

Light in alcohol content and bitterness, this amber coloured beer from Thessaloniki is very aromatic with citrus notes. It is unfiltered and unpasteurized.

This lager marries the sweetness of malt with the bitter of hops. Fruity, subtle tastes.  The aftertaste is sweet, leaving behind the bitter elements.

This golden coloured beer is topped with nice white foam.  Defined by its aromas of fruit, herbs, straw and some light and spicy notes. Average body with gentle carbonation.

Featuring a light and fresh flavour, this premium lager is special thanks to its selected hop aromas.

This sparkling beer with a cloudy appearance has a rich fruity aroma, reminiscent of clove and banana.

With its cloudy golden colour and medium white foam, Voreia Wit features a bit of bitterness and dryness with a bit of caramel aromas. The flavour is dry with a hint of sweet almond in the mouth.

The taste is a testament to the historic brewery: tawny with body, aroma and bitterness.  This foam is rich and long with a slightly fruity and bitter taste at the end.

This full bodied pilsner is full bodied with a light flowery aroma and hint of fruit.  Crisp on the palate with a long aftertaste.

This full-bodied beer features a velvety texture, medium bitterness with a caramel flavour and the aroma of roasted coffee. Black Mak is a genuine unpasteurized beer.

This fresh beverage is a perfect alcohol substitute with a fresh pear aroma and taste. A gluten- and alcohol-free drink.

Beers from the Greeks Islands

Produced in Chios from selected malt varieties and whole hops, this unique beer is bottled without pasteurisation. It retains its flavour and other organoleptic characteristics.  Hops and citrus aromas dominate its taste while the body is rich with fruits and a touch of bitterness.

Known for its lightweight yet distinctive flavour, this ale’s malt and hops are equally balanced with fruity flavours of orange, lemon and grape. Slightly caramel with a moderate aftertaste. 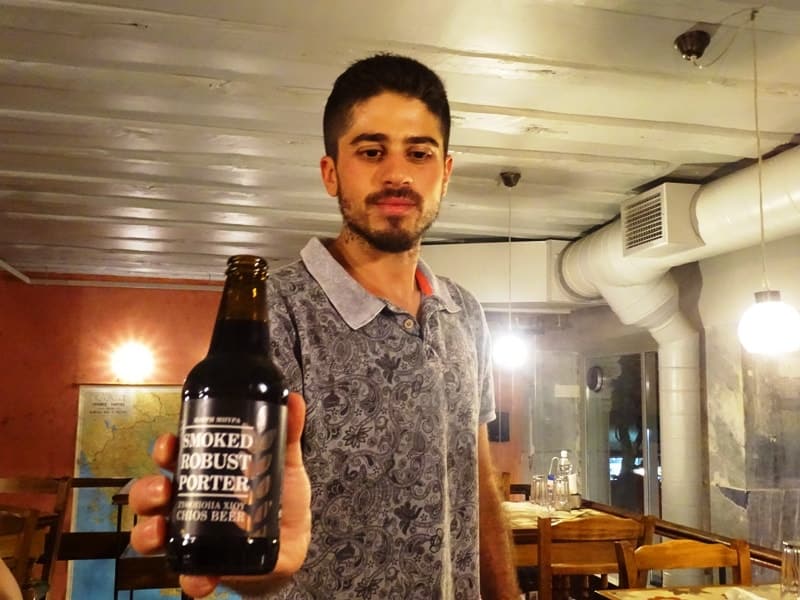 Marea beer is a double malt ale produced from five gain malts. It owns a distinct robust taste and the aroma of citrus and dried fruits.  Unfiltered and unpasteurized, Marea beer is a deep golden colour beer with orange highlights. Notice the slightly sweet taste of the malt while the bitterness of the hops leaves a distinct aftertaste.

Born on the Cycladic island of Tinos, Nisos is a rich flavoured beer with excellent aromas.

Three types of hops are incorporated in this classic India pale ale which boasts scents of citrus and peach.  It has an aromatic character with a long aftertaste.

With a bright, refreshing taste, this beer boasts aromas of bergamot as well as lime and lemon blossom. It finishes sweetly thanks to the inclusion of Santorini honey.  The foam is medium length.

There are more Greek beers from microbreweries available around Greece. So when traveling keep your eyes open.

Have you tried any Greek beer?

Which one is your favourite?

Special thanks to John Spathas and Manas Kouzina Kouzina for helping me with this post.