Kato Zakros is a charming fishing village on the South-East coast of Crete located 40km from Sitia and 107km from Agios Nikolaos. Nestled in a valley of olive groves with a scenery of dramatic mountains behind, it’s one of the most remote holiday destinations on the island providing visitors with a tranquil escape to enjoy the surrounding nature and history plus that special Cretan hospitality.

Things to See and Do in Kato Zakros

There are 3 beaches in Kato Zakros to enjoy, the first is the South beach, visible as you arrive into Kato Zakros. This is the largest beach found in the bay and has sand and pebbles with rocks in places. Despite being the largest beach with tavernas along the front, it has only a few umbrellas so you better to take yor own onw. The North beach, accessible by following a path from the South beach, is where you’ll find the fishing boats. It’s a small pebble beach mostly used by the locals when they want to cool off in the sea. The third beach is the smallest but quite possibly the most picturesque as it’s enclosed between rocks, follow the stairs down and don’t forget your camera!

The Minoan Palace of Zakros

Zakros archaeological site contains the most isolated and the smallest of the Minoan Palaces on Crete built around 1900BC. Covering 8,000 square metres (making it 5 times smaller than Knossos) with 150 rooms around a central court, it is thought that this palace was a gateway to the East during Minoan times. 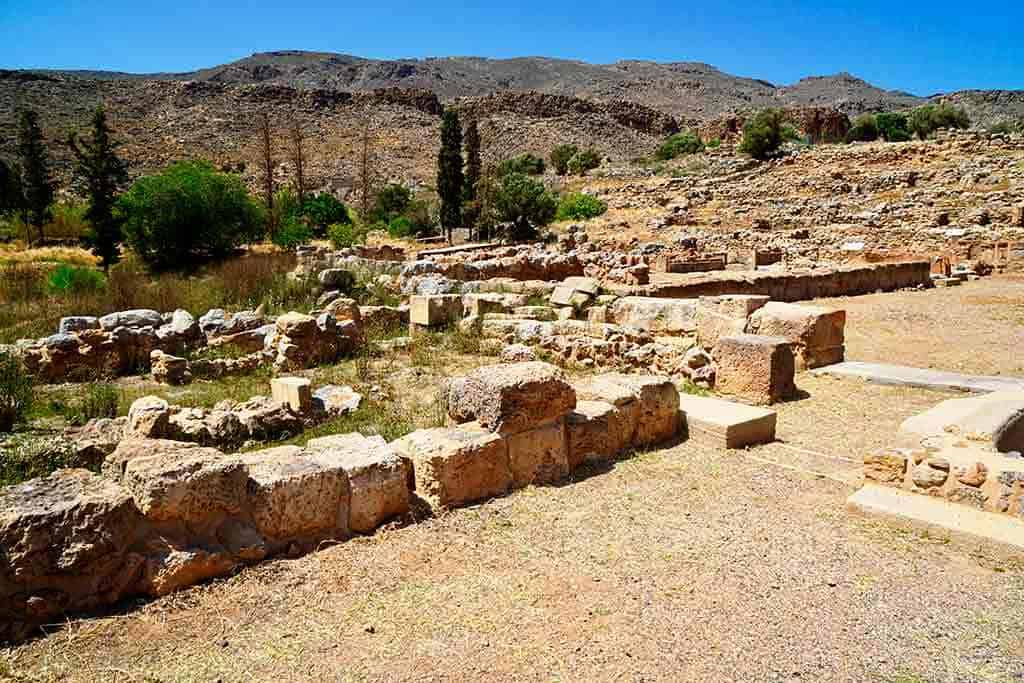 As well as being able to see the ruins of the palace (unlike Knossos there are no reconstructions of the buildings), visitors can see the partially excavated town that surrounded the palace with discoveries such as a stone bench, stone paving and steps helping to take you back in time to see and understand how life was lived amongst before the palace was destroyed around 1450BC.

Hike The Gorge of the Dead

Known as the Gorge of the Dead due to the Minoan cave burials, you can take a scenic 4km hike (about 2-3 hours walking time) along the well-marked trails and river bed as you make your way from Ano Zakros (upper Zakros) down to the seaside village of Kato Zakros.

From the car park and bus stop located 4km from Ano Zakros, the hiking trail starts with a steep 15 minute descent down the canyon with its towering rocks before reaching the river bed which leads you out into the bay of Kato Zakros having passed Castellas – A gigantic isolated rock on which sit the visible ruins of a castle and from where visitors can see the best view that takes in the whole canyon. Expect to hear the tinkling of goat bells along with the screech of cicadas as you enjoy your journey through nature. Remember to take enough water with you, wear the right footwear, and protect yourself from the sun.

With its impressive stalactites and stalagmites as well as a small lake, Pelekita Cave is one of the largest caves on Crete measuring 310 metres in length but due to its remote location has not been spoilt by tourism. Known also as ‘Cave of the Fig Tree’ due to the tree that stands at the entrance, it’s accessible by a tough 5km (1 hour) hike from Kato Zaros or by boat ride. The cave, which sits at an altitude of 100 metres, is thought to have been inhabited from the Neolithic period so is of as much interest historically as it is naturally.

Where to stay in Kato Zakros

We enjoyed a stay at the beautiful Terra Minoika stone villas where we met owners Stella and her husband who were amazing hosts. Surrounded by olive trees and vineyards with a stunning view out across the sea, this place is full of character with unique art and artefacts wherever you look.

I also recommend Stella’s traditional apartments, these self-catering studio’s are a true delight thanks to the care that has gone into the design of both the rooms and the grounds – Think stone archways, terracotta pots, and rustic interior décor with dark wood and views that take your breath away.

Where to eat in Kato Zakros

Relax on the terrace in a director’s chair as you alternate between people watching and admiring the sea view at this friendly and affordable cafe/snack bar. It’s the ideal place to go for breakfast, a light lunch, or snack with salads, sandwiches, crepes, and ice cream on the menu as well as refreshingly cold drinks that come with a complimentary meze of snacks such as crisps and olives. 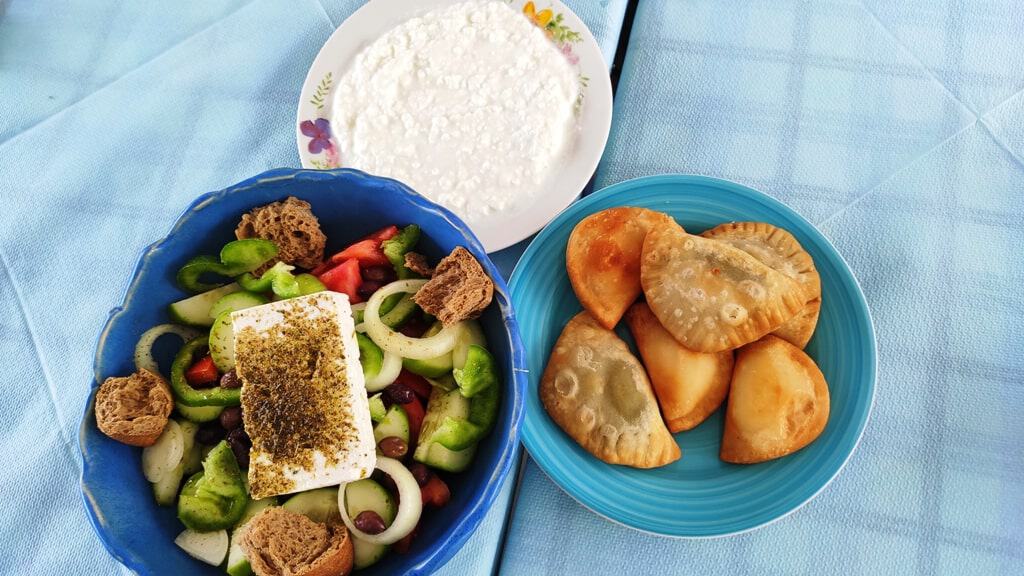 Located a few steps from the beach ensuring lunch or dinner with a view, the family-owned Taverna Nostos and the oldest in Kato Zakros, serves up traditional Cretan dishes using local ingredients – The olive oil comes from the owners olive trees, the meat from local farms, and the fish fresh from the sea that morning. In quintessential surroundings with blue tables and chairs beneath straw umbrellas you can enjoy Dakos (rusks of Cretan bread topped with tomatoes, olive oil, and a sprinkling of cheese and herbs), cheese pies, fried aubergine, rabbit stew, roast lamb, and game that has been caught from the mountains of Zakros.

When it’s time for dessert head to the local bakery (run as an all-female cooperative) to delight your sweet tooth with traditional homemade pastries, cookies, and other delights.

Kato Zakros has an amazing energy, it’s a place that leaves you relaxed thanks to its tranquil nature and is the perfect place to unwind for a week when you want to go back to basics and forget about life back home in the busy and bustling modern world.