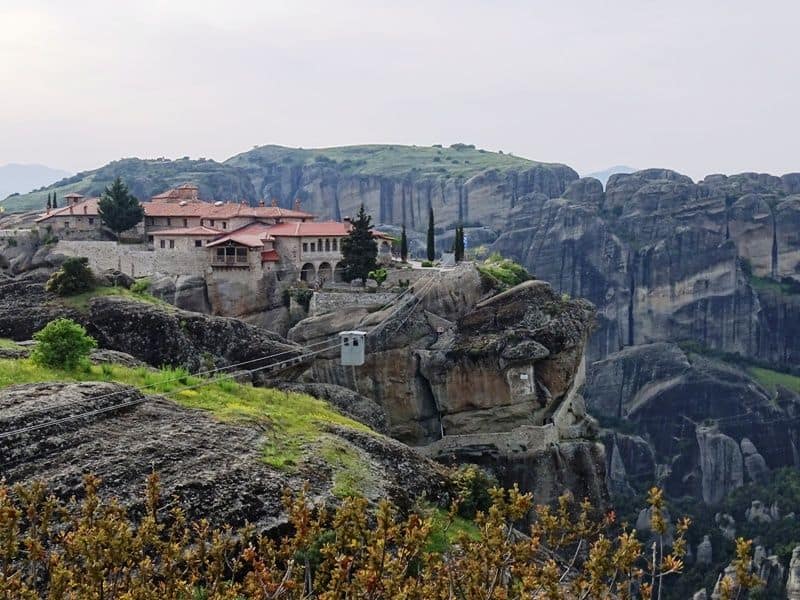 Watching the sunset is an experience I really enjoy and especially when I have the chance to admire it from a unique place like Meteora. My recent weekend trip to Meteora with Travel Bloggers Greece and Meteora Thrones also included a sunset tour.

Check out my post: How to get from Athens to Meteora.

Our guide Dimitris picked us up from the hotel with the company’s luxury van. As we headed towards the giant rocks he told us a lot of things about the area, Dimitris grew up in Kalampaka and knows the area well.

As we approached the Meteora rocks, we saw outside the village of Kastraki a colorful cave inside the rocks dedicated to St George. It is known as St George Mantilas (scarves) from the many scarves that hang at the cave’s entrance. This custom started during the Turkish occupation when a Muslim that lived in the area cut some wood from Saint George’s sacred forest. The saint caused paralysis to the man’s arm. He then was cured by offering his wife’s veil to the Saint. Every year local man and woman climb to the cave, take down the old scarves and hang new colorful ones.

Our first stop was at the Holy Monastery of St. Stephens, which is a nunnery. Compared to the other monasteries in Meteora, it offers easy access through a wooden bridge. There are two Katholikon inside the monastery an old 16th-century chapel that was damaged during WWII and a new one that was built in the 18th century and is dedicated to St. Charalampus.

There is also a small museum on site worth visiting. What I really loved about the monastery is the incredible view it has towards the valley of Thessaly, Kalampaka town, and Pindos mountains. It is also the only monastery visible from Kalampaka.

We left St Stephen’s Monastery, and we headed back to Kalambaka to visit the church of Virgin Mary. The Byzantine Church of the Assumption of Virgin Mary was built between the 10th and 11th century on the ruins of an older Christian church. There are also some ancient marbles embedded in its walls that are still visible. The church along with a house in Kalampaka are the only buildings that survived the fire that the Nazi put in town during WWII. It is a beautiful church with impressive frescoes. Unfortunately, photography was not allowed inside the church.

We then headed to an abandoned monastery, the hermitage of St Nicholas Badova.  There we also saw hermit caves that were used by monks when they sought isolation. They would cut the wooden ladders, and they would survive by donations made by locals with the use of ropes.

As the sun was setting, we made a stop to a beautiful spot with Kalampaka town in front of us and the impressive Meteora rocks at the back.

We then drove back into the rocks and found one of the best spots to watch the sunset. As we were standing on the top of a rock,  a vast green valley was in front of us with a forest of rocks surrounding it and some monasteries nestled on the top. What an incredible view! Unfortunately, there were a lot of clouds on that day but still the sunset was beautiful.

Check here for more information about the sunset Meteora Tour.

Where have you seen your best sunset?

I was a guest of Meteora Thrones for the weekend. As always opinions are my own.