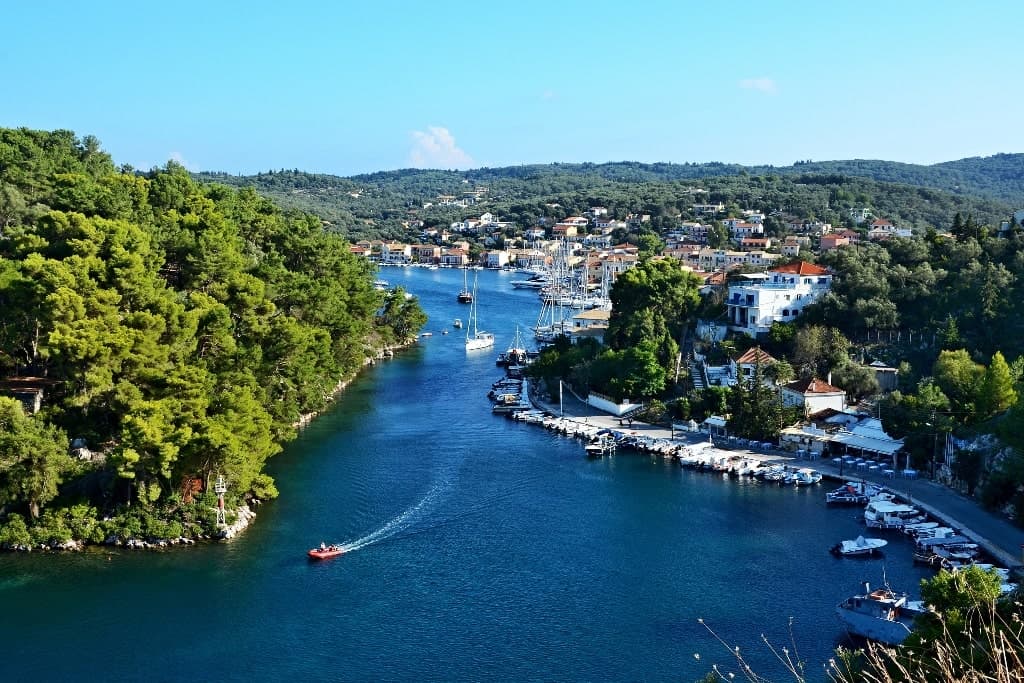 Paxos, a Greek island in the same group as Lefkada, Ithaca, Corfu, and Kefalonia, is a charming, non-touristy island on the western coast of Greece. It is known for its unpretentious, slow pace of life, crystal clear waters and steep chalky cliffs, and a plethora of olive groves. Paxos Island is a perfect place to spend some time in search of the traditional island way of life.

A Guide to Paxos Island Greece

Where is Paxos Island

Paxos lies about ten miles off the western coast of Greece, in between Corfu and Lefkada on the northern coastline. Its nearest island is Antipaxos, a tiny island less than a mile from Paxos.

How to Get to Paxos Island

The only way to get to Paxos is by ferry, either from Igoumenitsa on the mainland or from Corfu. There is no airport on the island. The closest airport is in Corfu which is 1 hour away with the fast ferry.

The Best Time to visit Paxos

The best time to visit Paxos is in the summer, when the weather averages almost 90 degrees Fahrenheit, or in the late spring and early fall, when the weather is around 75-80 Fahrenheit. Like on many other Greek islands, travellers visiting outside of the high season may run into closed hotels and dining establishments due to seasonal operations.

How to Get Around Paxos

The best way to get around Paxos is by car or moped. If you do not want to pay for the car ferry, then you can hire a car on arrival into Gaios town. Travellers who do not have a car will find it more difficult to explore the island at leisure. Because Paxos is a very non-commercial island, buses and taxis may or may not operate on a regular basis.

9 Best Things to Do in Paxos Island

Paxos Island is a small but bountiful place. With jaw-dropping scenery and small towns, it’s a restful place to spend time. After all, legend says that the island was created when Poseidon struck Corfu with his trident so he and his wife could get some rest. Here are some of my favourite things to do on Paxos.

1. Check out the port town of Gaios

Gaios is the main port town of Paxos, although compared to other port towns it’s relatively small. It lies on a natural harbour inlet resembling a fjord and is always full of sailboats or yachts. This is also where the ferry boats come in.

The town itself is charming and built in a Venetian style; it’s home to plenty of boutique shopping and galleries. The harbourfront is lined with bars and tavernas, perfect for sitting down and enjoying the bustling port.

Lakka is a tiny town on the northern tip of Paxos. It is full of shops and restaurants, and often sees many boats anchored offshore. There are two main beaches here at Lakka, both of which are nice for an afternoon of sunbathing or water sports.

Loggos is a postcard-perfect resort town, the smallest on the island. It is home to plenty of delightful shops and restaurants, local beaches with organised sports, or boat charters. The town is surrounded by olive groves – this is a great place to pick up some local olive oil.

4. Watch the sunset from Erimitis Beach

Erimitis Beach is one of two beaches on the west side of Paxos that can be accessed by car, although you do have to park and walk down a very narrow cliff path to the beach. Erimitis Beach appeared in 2007 when the chalky cliffs collapsed, creating a new beach. It is pebbly and unorganised. The water is sometimes rough too, but the setting is absolutely magical, and the perfect place to watch the sunset.

5. Take the boat to Antipaxos Island

A boat tour to Antipaxos Island is a perfect day trip from Paxos. Many rental boat companies don’t want inexperienced people diving their boats across the channel – it can be bumpy – so if you aren’t comfortable doing that, then definitely take advantage of a tour or a water taxi.

An organised tour, like one offered by this company, leaves from Loggos and takes guests out to the many coves and islets around Antipaxos. They include lunch and snorkeling gear, as well as time on the island itself.

6. Circumnavigate the island with a boat and check out the caves

The best way to visit many of the beaches and caves on Paxos is by boat. If you are staying near the shore of Paxos, then hiring your own boat is perfectly reasonable and easy. This way you can stop when you want, whether at a beach or offshore to jump in the crystal clear waters. You can visit the caves and coves, and you can pack your own food to enjoy whenever and wherever you like.

For travellers not comfortable driving their own boat, then you can take a tour like this one. They will show you some of the secret spots off the coast of Paxos, like the caves at Erimitis Beach, as well as take you across the channel to Antipaxos.

7. Explore the many beaches on Paxos Island

Like other Greek islands, Paxos has plenty of incredible beaches. Some of these are near towns and organised, with sunbeds and umbrellas, taverns and bathrooms. Others are secluded and unorganised, meaning you need to pack whatever you want for the day (and take it with you when you leave). Here are some of the best beaches on Paxos Island.

For something a little different, you can go hiking around Paxos! Many old footpaths crisscross the island, leading to tiny chapels, small settlements, secluded beaches and hilltops with views out across the sea. Because the island is so small, you can easily cover most of it in a day if you like. It’s best to hike in the spring or fall when the weather is not super hot.

9. Check out the Tripitos Arch

The Tripitos Arch is a natural rock arch offshore on the southern end of the island. It stands 20m tall in the sea. You need to park near the village of Ozias, and then walk; be sure to ask for directions as there are few signs along the way. If you take a boat to Antipaxos, you will see the arch from the water.

Where to Stay in Paxos

While there are several places to stay in Paxos, my favourite is Pepi’s House. Pepi’s House is on Airbnb, and it is a charming 150-year-old stone house in the hills with views across to Epirus and Corfu. The traditional style offers a wide terrace with views, a comfy living space, and two bedrooms that can sleep 4 people.

The untouristy Paxos is a far cry from some of the other Greek islands, even though it still has plenty of traditional restaurants, cafes, bars, and shops to explore and buy from. If you are seeking an authentic and relaxed atmosphere, then Paxos is the ideal place to visit.

Have you ever been to the Greek islands of Paxos and Antipaxos? What did you enjoy the most?

18 thoughts on “Paxos Island Greece: 9 Things to Do”