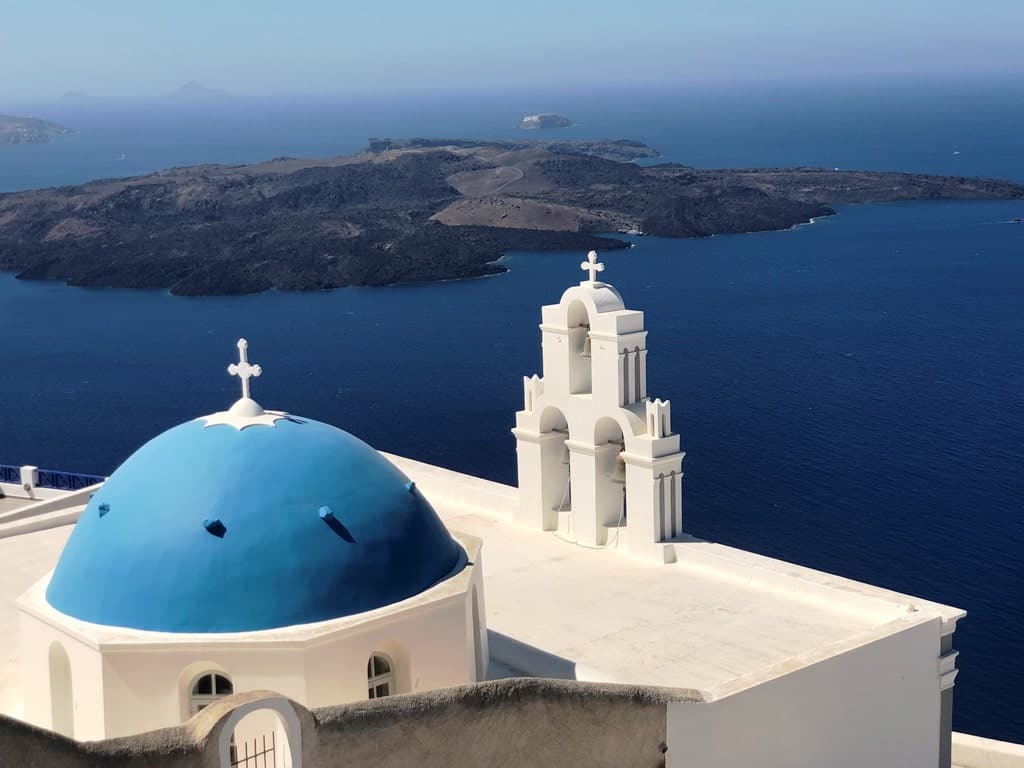 It’s on most people’s travel bucket list but when is the best time to visit Santorini? It all depends on your personal preference really, most people visit in the Summer when the island is bustling but over the last few years, Santorini has been growing as a Winter destination too with many museums open year round and those stunning views going nowhere no matter the time of year!

When Is the Best Time to Travel to Santorini?

The most popular time to visit Santorini with temperatures at their highest and the sea feeling like bathwater, you’ll find the island in full swing at this time of year with numerous flights and ferries arriving and departing daily, the nightlife in full swing, all the excursions running, and the tiny backstreets of Oia clogged with cruise ship passengers!

This roasting hot busy time isn’t to everyone’s taste but if you want to swim, sunbathe, and enjoy a lively fun-filled evening, high season is the best time to visit Santorini.

Check out: The best Airbnbs to stay in Santorini.

Many people believe that the best time to go to Santorini is during one of the shoulder seasons as you get all the enjoyment of Summer but without the intense crowds and intense heat. Now is ideal if you’re not really a beach or pool person (the water is cold in May and October!) and are more interested in hiking and simply soaking up the scenery.

Though not running quite as frequently as the height of Summer, direct flights and the majority of ferry routes are in operation May-October and all of the hotels, tavernas, shops, wineries, and tours are up and running at the start of May, until mid-late October.

With 15,000 people living on Santorini all year and more and more hotels opening year-round, there’s enough going on to keep your travels interesting even in the Winter. The main museums and archeological sites are open and with reduced ticket rates from November-March and the government museums have free entry the first Sunday of the month (Nov-March), you can save a lot of money.

However, getting to Santorini in the Winter can be more expensive as there are no direct flights from the UK, and ferries only run once per day from Pireas. In terms of weather, anything should be expected – from a week of rain with the odd thunderstorm or gale that disrupts ferries to a week of sunshine that feels like Spring back home.

My Favourite Time Of Year to Visit Santorini

Personally, I believe the best time to visit Santorini is off-season, in the Winter. Why? You’ll have this idyllic island pretty much to yourself – no cruise ship passengers, no island hoppers, just you the locals, and a handful of fellow tourists.

Santorini is deemed seasonal so the majority of souvenir shops, hotels, and touristy tavernas will be closed but if you base yourself in Fira (the main town) or Oia (the most famous village!) you can shop and eat where the locals do.

The downside of traveling to Santorini in Winter is that it will be too cold to swim but if you don’t mind walking the black sand beaches with a sweater on, and think exploring the quaint backstreets without the crowds is perfect, take my advise and ditch the Summer vacation in Santorini for a Winter one.

Average Temperature and Rainfall in Santorini

What Is The Best Month Of The Year To Visit Santorini?

After New Year celebrations have finished, the island goes really quiet with January usually the wettest month of the year as well as one of the coldest, temperatures averaging between 9c-14c. If you want to escape from the world, venturing out to enjoy meals in front of a fireplace with the locals at the weekend, this is the time to do that but make sure your hotel has heating installed!

With temperatures the same as January, February is traditionally the windiest month of the year. Hiking and sightseeing outside must be carefully planned around the weather forecast but with the municipal museums still providing half-priced off-season tickets, you can lose yourself in the archeological museum for a few hours easily enough on the rainy days.

In March you’ll notice more sun and the temperatures starting to rise with highs of 16c in the daytime but the nights still cold with temperatures dropping to 10c. Compared with the UK and other parts of Europe, March is definitely the start of Spring which makes it ideal for hiking but unpredictable weather should be expected day by day with a mix of overcast rainy days when you need a jacket and much warmer days where you might be able to get away with wearing a t-shirt.

The perfect time for hiking, visiting the wineries, and exploring the hidden corners of this island, Spring has truly arrived in April with the clear blue skies and days getting progressively warmer with highs of 19c. At Greek Easter, there’s an influx of ferries bringing locals over for family celebrations and ahead of Catholic Easter (which sometimes coincides with Orthodox Easter), there’s a flurry of activity with direct flights re-starting and all the hotels, shops, and restaurants getting ready for the sudden influx of tourists.

By the middle of the month, it’s safe to say that summer has arrived with highs of 23c though you might still need something long-sleeved for the evening when the temperature can drop to 17c. In May the island becomes fully active after the quiet of winter with all of the hotels, tavernas, shops, and tours open again and the first island hoppers starting to arrive on the ferries. It’s still too early to experience much nightlife but you can sunbathe and swim, if you’re brave enough, the water temperatures still being chilly at 19c when in September they reach 24 c!

Officially the start of the beach season with the water temperatures now rising every day and the daytime temperatures hitting 27c and only dropping to 21c at night there’s extremely little chance of rain in June. From the middle of June, the island really gets going with increased ferries, good nightlife, and an influx of tourists ready to make the most of their Summer in Greece.

One of the busiest months of the year, and one of the hottest, expect highs of 29c and lows of only 23c so make sure your accommodation has air conditioning! A short yet sharp rain shower might catch you unawares in July but beach towels etc dry out so fast you’ll wonder if you imagined it!

August has the same temperatures as July yet the Melitami Winds can mean some very windy days – ideal for windsurfing and kitesurfing but also a reprieve to the intensity of the heat. August is the most popular time for families visiting the island yet also couples and solo travelers island-hopping – Expect crowds of people lining the caldera to take in the views at sunset and cruise ship passengers to be clogging up the backstreets with their guide!

With the sea now at its warmest yet the intensity of the daytime temperatures now dropping to highs of 26c, September is a very comfortable month to explore Santorini though it’s still busy with visitors until the middle of the month. Gradually, as the schools go back, the intensity of the crowds as well as the heat lessens with a chance of rain towards the end of the month and a drop in temperature at night to 20c meaning you might want to pack a long-sleeved top.

Unlike London or Paris, October still sees 9 hours of sunshine with highs of 23c and lows of 18c although the feel of Autumn is in the air by the end of the month which is when places start to close for Winter and the ferries and flights decrease making access to the island a little more difficult. October is the last month when you can still swim comfortably in the sea and is still a good October half-term destination providing you choose your resort carefully – Some places will close early leaving the Summer resorts feeling like ghost towns in the last week of October.

Now out of season with fewer ferries and only flights that go via Athens, museums switch to their Winter prices with municipal museums providing free entry the first Sunday of every month between November-March. It feels more Autumnal with an average of 8 days of rain to be expected but highs of 20C still mean you can soak up some sun even if it is too cold to dip a toe in the sea! November is a very peaceful month with the locals relaxing after the busy Summer season and few tourists around.

The first month of winter can bring very comfortable weather (if you’re used to winter in the Northern hemisphere) yet each year is unpredictable – It might be warm enough to take a stroll on the beach on Christmas morning with just a sweater on, highs reaching 16c, but it could be a wet, windy, or cold day that requires boots and a coat, low temperatures averaging 11c with snow uncommon yet not unheard of.

December is traditionally one of the wettest months as well as one of the windiest with few visitors around outside of the festive period but time it right and you can still enjoy excellent hiking days and it’s not unknown for the locals to still be swimming in the sea!

There’s a reason that people flock to Santorini in the peak season – The months of June to September ensure the sea is warm enough for swimming, your chances of an overcast day are rare (especially June-August) and the island is throbbing with life, and that special Summer vibe.

Check out: The best beaches in Santorini

Hotel prices and indeed flight prices are low at the start and end of the season when there are fewer visitors and things are only just starting up or winding down. May and October still have great weather but there’s a possibility that you could save even more on accommodation by visiting in April or November. Museum ticket prices are reduced November-March however, check flight prices as going via Athens could mean you lose any sightseeing and accommodation savings.

With the ferry companies running at their most frequent between June and the start of September, island hopping is a doddle in the Summer! You can get to Santorini from Pireas, Crete, Naxos, Paros, or Mykonos with high-speed boats as well as slower car ferries, ticket prices determined by the speed of the boat.

No matter when you visit this stunning island you’ll be blown away by its architecture, sunsets, and landscape but hopefully this article has given you a better understanding of the best time to visit Santorini for you personally.