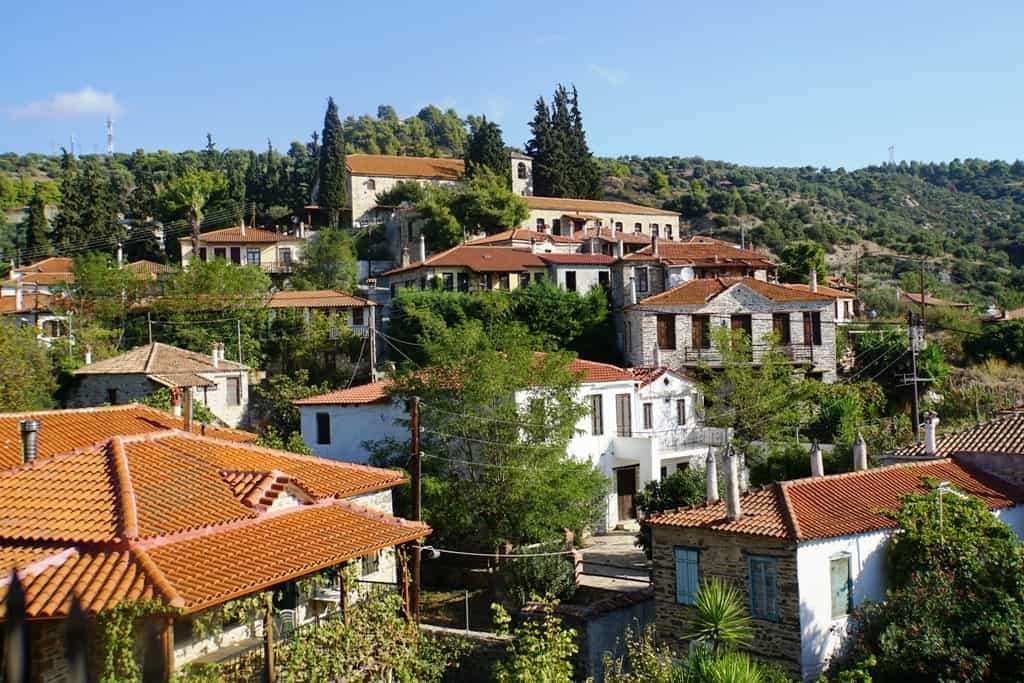 Halkidiki is comprised of three peninsulas in the northeastern Central Macedonian region of Greece. It is a popular summer tourist destination for Greeks and other Balkan residents and is known for honey production as well as wine and olive oil.

The capital of Halkidiki is Polygros, which is located in the centre of the region, equidistant to the peninsulas and just minutes from Thessaloniki, the largest northern Greek city. The peninsulas, also called legs, are known as Kassandra, Sithonia, and Agion Oros. Kassandra is the furthest south peninsula, where you will find the largest towns and most developed infrastructure. It is closest to the town of Thessaloniki and attracts large crowds of students and partiers. Sithonia, the middle peninsula, is less developed and perfect for outdoor lovers. Agion Oros, the northernmost peninsula, is home to Mount Athos, a monastic state which only men are allowed to enter. In addition, access is restricted to a certain number of people per day, and everyone who enters must have a special permit. Men who are Orthodox Christian take precedence of other men who want to visit. Interestingly enough, female animals are also not allowed, with exceptions for female cats, insects, and songbirds.

A Brief History of Halkidiki

Halkidiki has a long and extensive history. It is said that the gods and giants had a massive battle, during which Enceladus, the leader of the Giants, was buried alive on Kassandra; he is the source of earthquakes in the region. Athos, another giant, threw a stone at Zeus and missed, but formed Mt Athos in doing so. Sithonia is named for the son of the god Poseidon, Sithon.

Human history dates back 700,000 years in Halkidiki; in the Petralona Caves, human remains date back 20,000. The earliest traces of a true civilisation appear around 4,000 BCE, with the arrival of the Thracians and Pelasgians. By the 8th century, there were numerous city-states founded by Greeks; Aristotle was born in the Halkidiki town of Stageira. The region came under Roman rule in the 2nd century BCE and Ottoman rule in the 13th century CE.

The first monastery was built in the 9th century CE; by the 11th century, Mount Athos was known as the holy mountain.

11 Fun things to do in Halkidiki

There’s a lot to do in this region, from history and culture to relaxing beaches, spas, and great food and wine.

Unspoilt beaches with charming tavernas, glittering white sand, and pristine seas define many of Halkidiki’s coasts. Some, like Kavourotripes Beach, are made up of rocky coves, while others are more developed and have shops or bars along the beach.

Possidi Beach is located in the town of Possidi. It has plenty of restaurants and bars as well as disabled access. The beach is shallow and warm, highly recommended for children and families.

Kavourotripes Beach is also known as Orange Beach and Portokali. It’s a well-known beach that fills up quickly in the summer. The main beach is near a beach bar and has umbrellas and chairs for hire.

Paliouri Beach is surrounded by pine trees, but its also a fairly developed beach with restaurants, bars, and hotels.

Karydi Beach is one of Sithonia’s unorganised beaches, meaning no sunbeds or umbrellas. There are some nearby places to get take away food though. It is a very shallow beach and fills up quickly in the summer.

Trani Ammouda Beach is a long, wide beach with chairs and umbrellas for hire, plus shops and restaurants nearby. It is near Ormos Panagias and is a great family-friendly beach choice.

Alykes Beach, on Ammouliani Island off the coast of Ouranoupoli, is one of the most popular beaches in Halkidiki. It’s long and sandy, with beautiful turquoise waters.

2. Take a day Cruise to the Holy Mountain of Athos

While you can’t actually set foot on the Mount Athos, you can take a day cruise to see the monasteries and the remote land. The boats have permission from the monks to approach the land; sometimes a monk will come to the boat for pilgrims. Boats depart from Ouranoupoli or Ormos Panagias and half-day tours take 3-4 hours.

The thermal spa sits on a cliff overlooking the Aegean Sea, a modern health oasis among millennia of history. Guests can experience sauna, hammams, and swimming pools, hydromassage, medical support, and a wide range of treatments.

4. Explore the traditional village of Athitos or Afitos 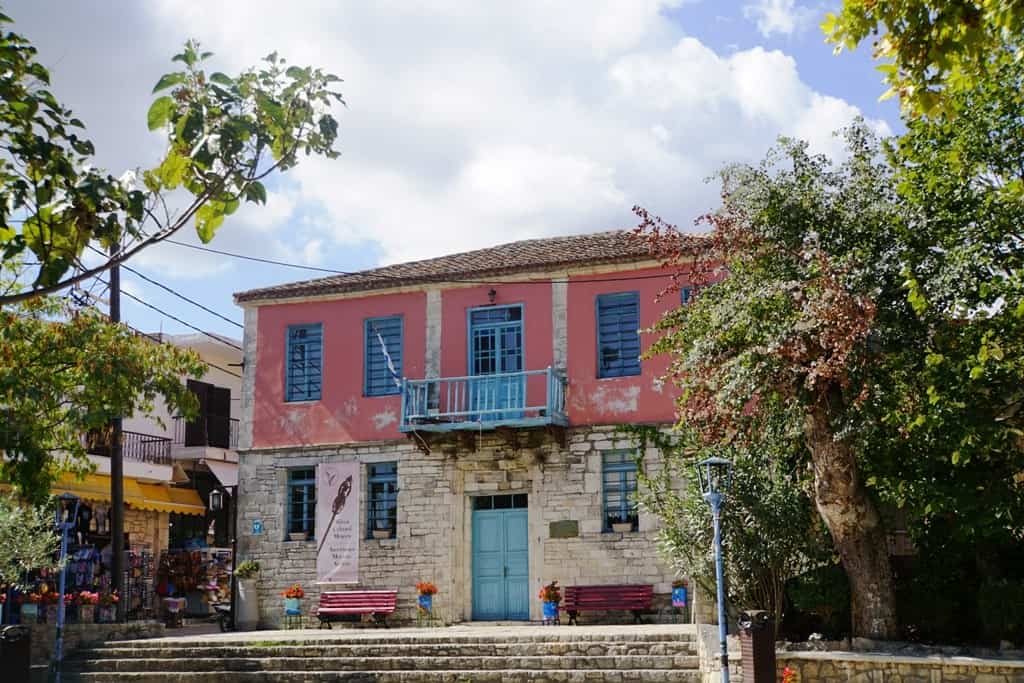 The traditional village of Afitos (also known as Athitos), which overlooks the Toroneos gulf is a beautiful place to spend a day. There is evidence of human settlement from 3,000 BCE, but the city flourished under the Athenian Alliance. The village is built of stone and the small squares, cobbled streets, and coastal walk highlight the historical and environmental significance of Afitos. Also in the town are sculptures of Vassilis Pavlis, a modern artist who has art all over the region. 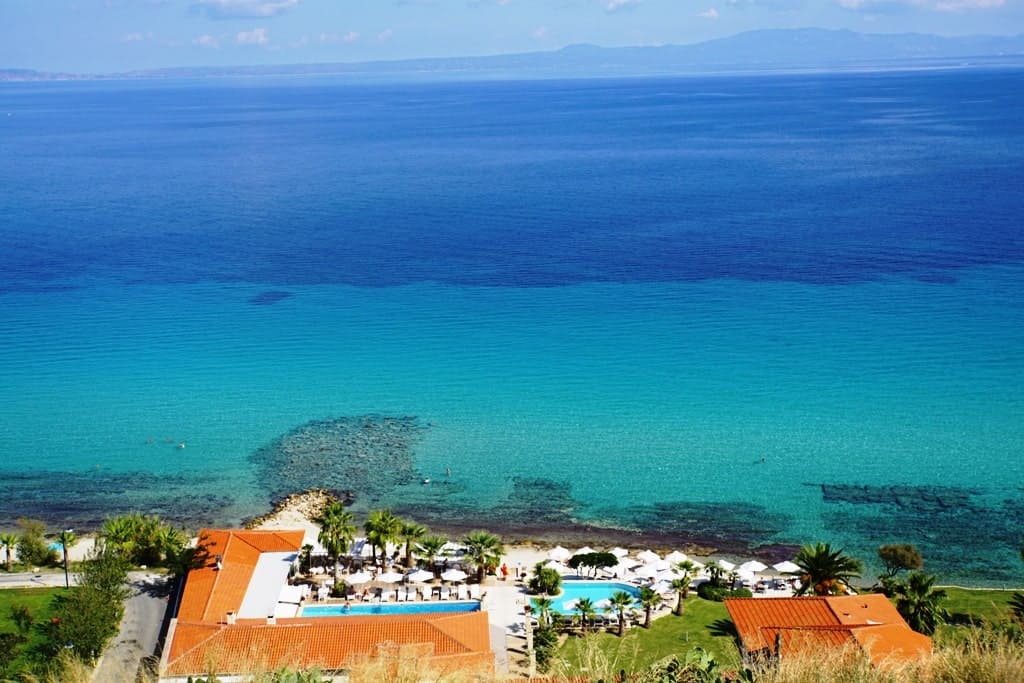 We had lunch at the Hotel Rigas restaurant in Afitos, a great place to stop while exploring the village. We enjoyed fresh seafood at Tuna Fish Concept with amazing views of the sea. Go for fresh ingredients married to traditional flavours.

5. Check out the old and new town of Nikiti

Nikiti, a town in Sithonia, has two parts – an old and new town. The old town is a beautiful traditional hill village with narrow streets, restored stone houses, and a medieval church. According to the stories, Nikiti was founded by refugees. It survived the fall of the Byzantine Empire and was one of the largest villages during the Ottoman rule.

The new town is just across the road from the old town along the coast. It has a bustling seafront promenade and is a popular, attractive summer destination for tourists. There are plenty of hotels, restaurants, and bars. Nikiti is also a starting point for boat tours to nearby beaches. 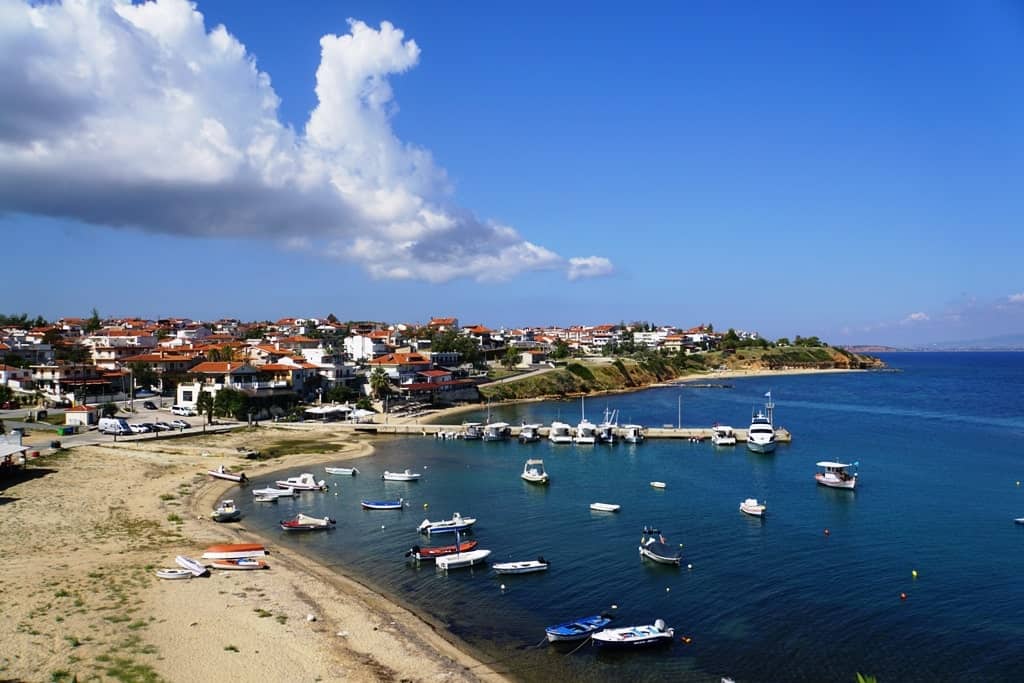 If you’re curious about visiting Mount Athos but are a woman or a non-Orthodox man, you can visit Nea Fokea. The town was originally part of the monastic community but was gifted to Greek refugees from Turkey in 1922, and today is a small tourist resort along the coast. 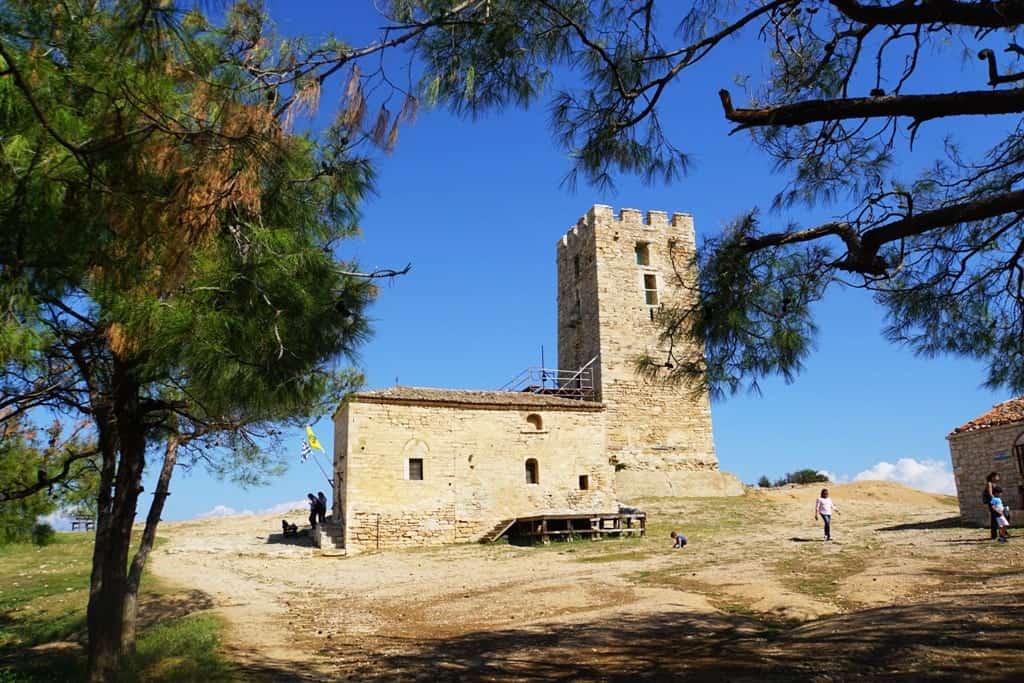 The most important features of the town are the Byzantine tower, built in 1407, and the spring of St Paul’s holy water, which is a chapel in a rock, where visitors can walk around in the area where St Paul lived. 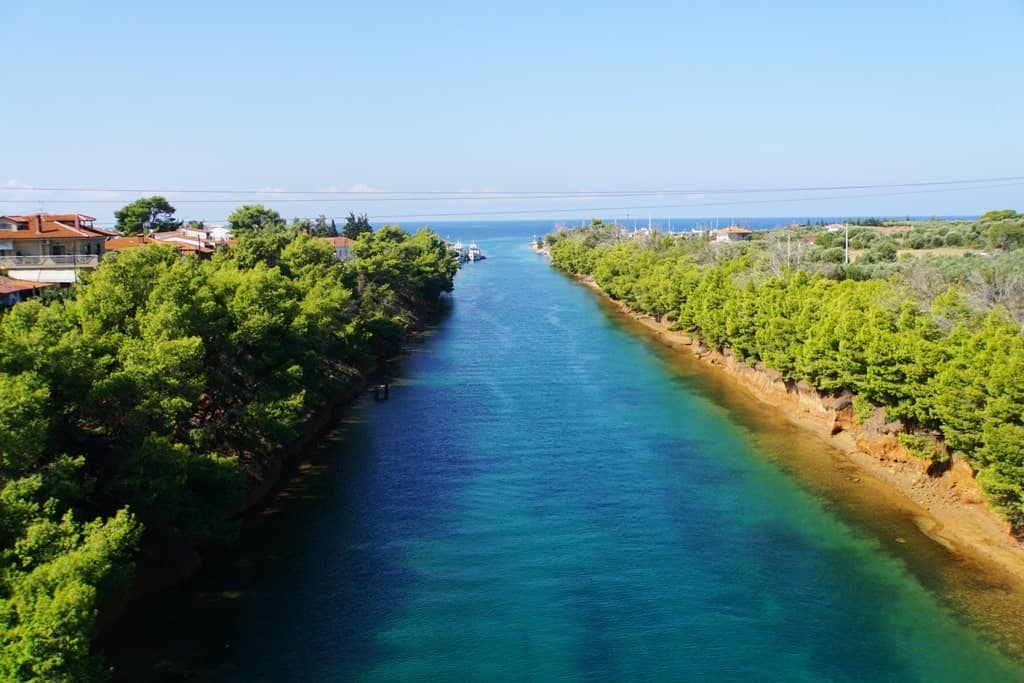 The Potidea Canal was built in the 1st century AD in order to facilitate movement between Thermaikos and Toroneos gulfs and to fortify the city of Kassandria. The canal is just over a kilometre long and is just 40m wide. Along the canal is a wall with towers built at intervals to secure the region. The modern canal was built in 1930, and bridges were built in 1970.

8. Enjoy the nightlife of Kallithea

Kallithea is the most popular village in Halkidiki during the summer because it attracts some of the best-known DJs to the many clubs and beach bars. If you’re a partier, this is where you’ll want to be, because parties start in the morning and go on all day and night long.

9. Explore the traditional village of Arnea 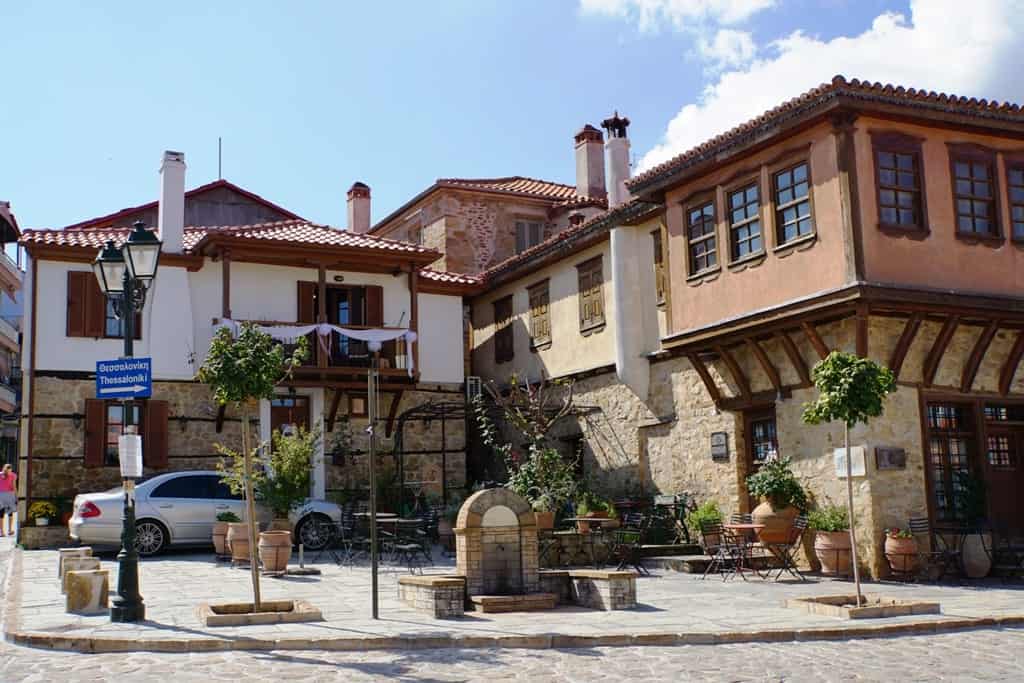 Arnea is one of the most important historical sites in Halkidiki and has been declared a historic site by the Ministry of Culture for its traditional Macedonian architecture and charming village centre. It is renowned for its guesthouses, traditional kafeneia, tavernas, and the church of St Stefanos.

St Stefanos is the largest church in Halkidiki but has been burned to the ground many times in its history. The glass floor within the church highlights the archaeological findings here. Visitors can also see the historic folklore museum, the old village school, and the chapel of Prophet Elias.

There are so many great outdoor sports in Halkidiki, from walking and cycling to horseback riding, paragliding, or mountain biking. The beaches feature crystal blue waters and beautifully warm golden sand, the woodland tracks and coastal paths beckon those who want to explore nature. Halkidiki also offers plenty of watersports, like windsurfing, waterskiing, scuba diving, snorkelling, and more. You can also hire a sailboat or join a cruise to Mount Athos. Regardless of what you want to do, the outdoor activities in Halkidiki are endless.

11. Explore the capital of Halkidiki (Polygyros) 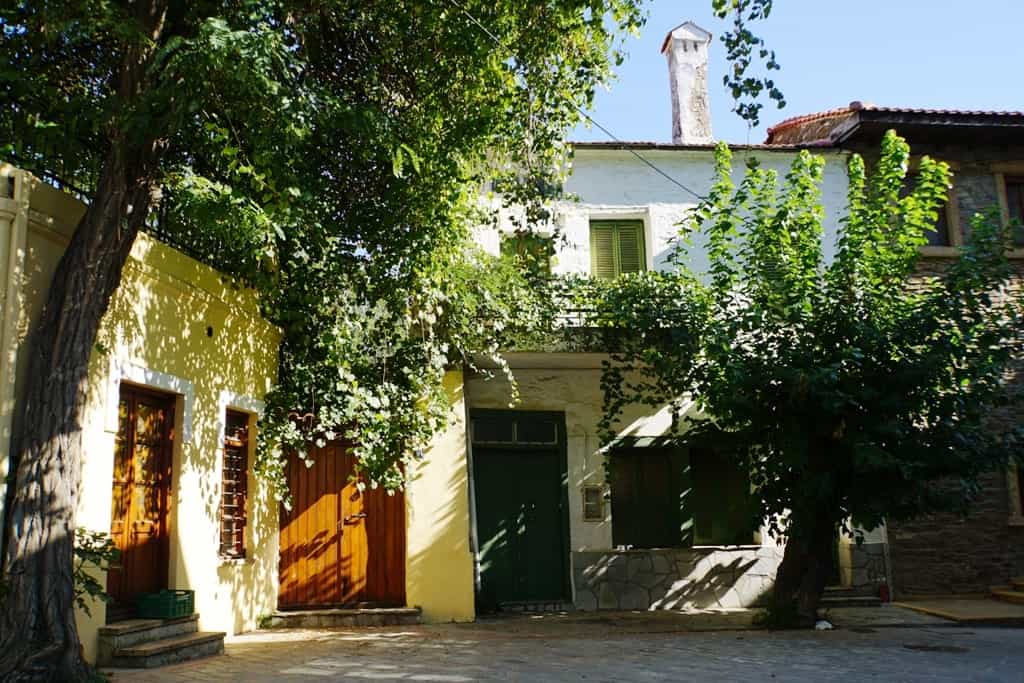 Polygyros, the capital of Halkidiki, is located in the centre of the region on the slopes of Mount Holomontas. It is not far from Thessaloniki and is one of the most popular places to stay. The town has a range of hotels and guesthouses, tavernas and restaurants, and shops. 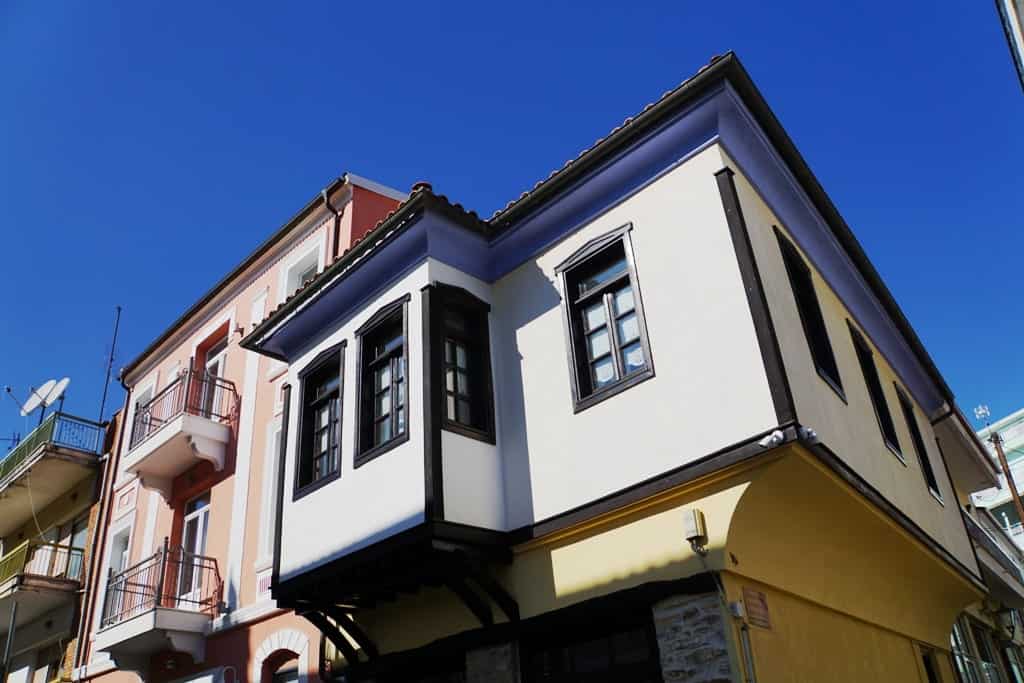 Some of the attractions within Polygyros are the Exi Vrises Park, the Archaeological Museum, the Folklife Museum, and the churches of Metamorfosi, St Demetrios, and St Modestos.

We had amazing food at Exi Vrises, or Six Fountains, restaurant.

Where to stay in Halkidiki

The Athena Pallas Resort, an Acrotel, is located at Elia Beach in Sithonia. It is a large resort complex set among the pine trees, complete with two freshwater swimming pools, a spa and fitness centre, four restaurants and six bars, a folk art museum, tennis courts, and more.

Our executive suite “Patriko” room was in the VIP area of the hotel in front of the swimming pool. The room was spacious and modern, with a large double bed in the main room, and two single beds on a mezzanine above the bathroom, perfect for children. The living room has a minibar, coffee and tea-making facilities, a desk, television, and laptop safe. The room is furnished with traditional Macedonian furnishings and style, yet has a very modern bathroom and facilities.

The hotel restaurant offers an excellent breakfast with local products. We also enjoyed dinner at the hotel. Both were delicious. The Athena Pallas Resort is a great place to stay to explore the Halkidiki region.

How to get to Halkidiki

The closest airport to Halkidiki is Thessaloniki Airport, the third-largest airport in Greece and the only major airport in the northern part of the country.

It is a one hour drive from the airport to Kassandreia, the main town in the southern peninsula.

How to get around Halkidiki

The only way to get around Halkidiki is by car, so renting one is the best way to go, as constantly hiring a taxi would be expensive. You’ll be happy you hired a car since the roads are great and there are plenty of tiny, hidden gems to explore.

While many visitors to Greece visit Athens and the islands, there are some really amazing parts of the country, like Halkidiki. This charming region in the north of Greece has an incredibly rich history and inspiring landscapes, and should absolutely be on your list of places to visit in Greece. Halkidiki ticks all the boxes – great food, epic scenery, warm Greek hospitality, gorgeous beaches, and ancient stories.

The trip was organized by PASS PARTOUT – Tourism Marketing for the tourism campaign Urban Centers of Central Macedonia, Greece in cooperation with Pella Prefectural Unit and Halkidiki Tourism Organization, under the auspices of Central Macedonia Region. Sponsored by: TRAINOSE 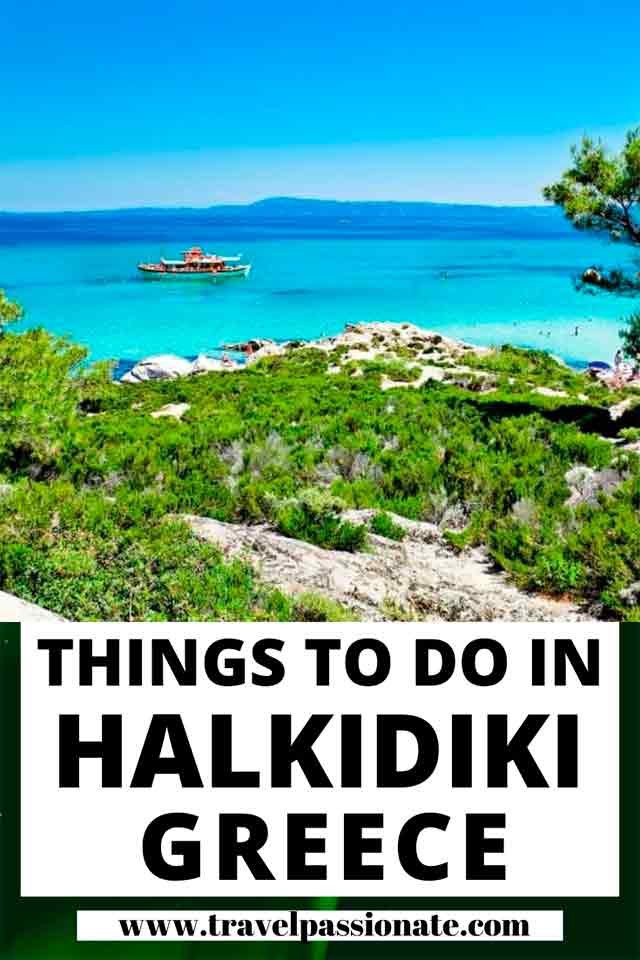