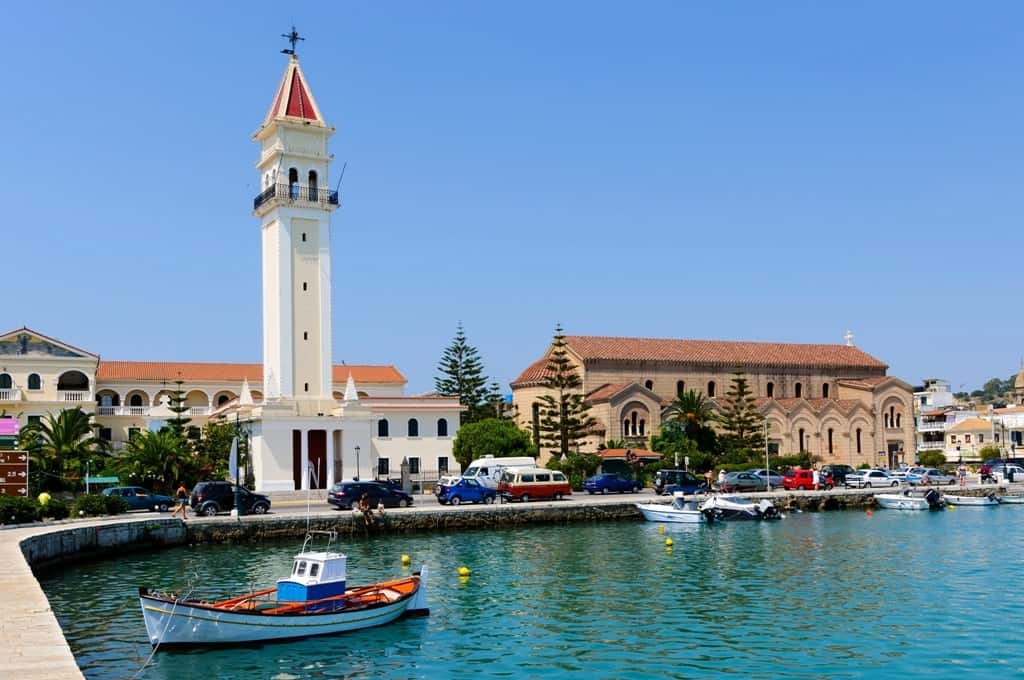 Whether you call this idyllic Greek island by its Greek name of Zakynthos or its Italian name of Zante, you’ll be spoilt for choice on things to see and do no matter whether you’re a culture vulture, nature fan, or a beach bum!

Things to do in Zakynthos – Day Trips and Excursions

Hop on a boat and go across Keri Bay to the uninhabited islet of Marathonisi where you’ll find a sandy white beach and the nesting ground of endangered loggerhead sea turtles. Hike up to the old monastery if you’re fit enough and admire the beauty of Greece.

Marvel at Mother Nature as you take a boat trip out to the Blue Caves, a series of sea caves along the dramatic Zakynthos coastline. Boats depart from Porto Vromi or Agios Nikolaos and usually stop at the famous shipwreck beach called Navagio making this one of the most popular trips on the island.

If you’re feeling greedy and want to say you visited 2 Greek islands in 1 trip, head across to the neighbouring island of Kefalonia with a tour guide for the day and discover the Monastery of Gerassimos, Drogorati Cave, Melissani Lake, the picturesque town of Aghia Efimia where you can enjoy lunch by the water, and finally the capital of Kefalonia; Argostoli.

Head over to the mainland for the day to see the archaeological site of Ancient Olympia, the place where the original Olympic Games were created and held. You’ll see the ruins of the stadium, the gymnasium ruins, the place where the original flame once burnt, and where one of the seven wonders of the ancient world once stood, the temple of Zeus. An official guide will take you around Ancient Olympia helping you bring history to life.

A fun one for the kids as well as the adults. Jump aboard a pirate ship and sail along the north-west coast of Zakynthos cruising past Tsilivi beach and Saint Nicolas Schinari beach with a stop at the Blue Caves and Navagio Shipwreck beach. The 8 hour excursion with BBQ lunch onboard also includes a visit to the Dolphin Caves, Keri and Oasi beach, Laganas Bay, and Marathonisi Island before cruising back to Zakynthos port past Porto Zoro, Banana Beach, Porto Roma, and Argassi. 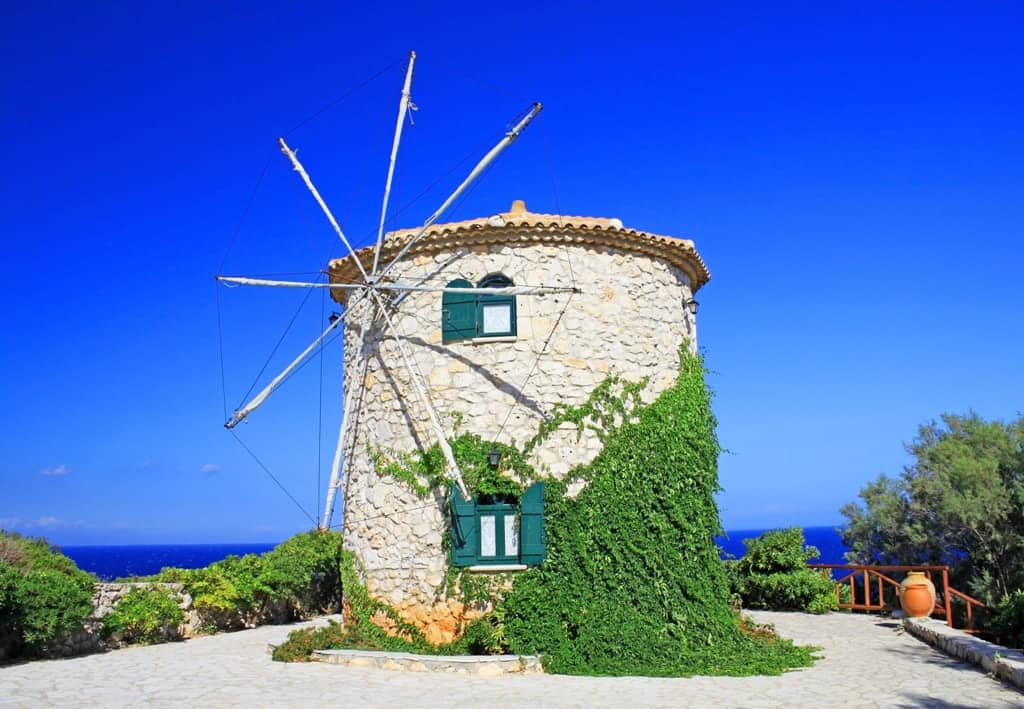 Boats not your thing? Don’t despair, you can discover Zakynthos on an organized coach trip with guide. You’ll stop to see the salt marshes at Alykes, visit a winery, visit the Blue Caves (boats are required for this part of the trip) before looking down on the famous shipwreck beach from the cliff above. You’ll also get to explore Anafonitria Monastery, the traditional crafts village of Volimes, and the church of Saint Mavra in Maherado.

Access the hidden and otherwise unreachable parts of Kefalonia on a thrilling jeep safari! Drive around the scenic Vrachionas mountain range and visit the high viewpoint that shows you the whole of Zakynthos spread out before you. You’ll also have time to stop and walk around traditional villages and go swimming at Makris Gialos beach.

Things to do in Zakynthos – Explore the beaches

This is the most iconic beach on the island due to the famous shipwreck (a stranded freight liner) that lies on the white pebble/sand beach. You’re sure to have seen photos of it in travel brochures and around the web! The beach can only be accessed by boat and due to its popularity, becomes overly crowded in the high Summer season as it’s only small. 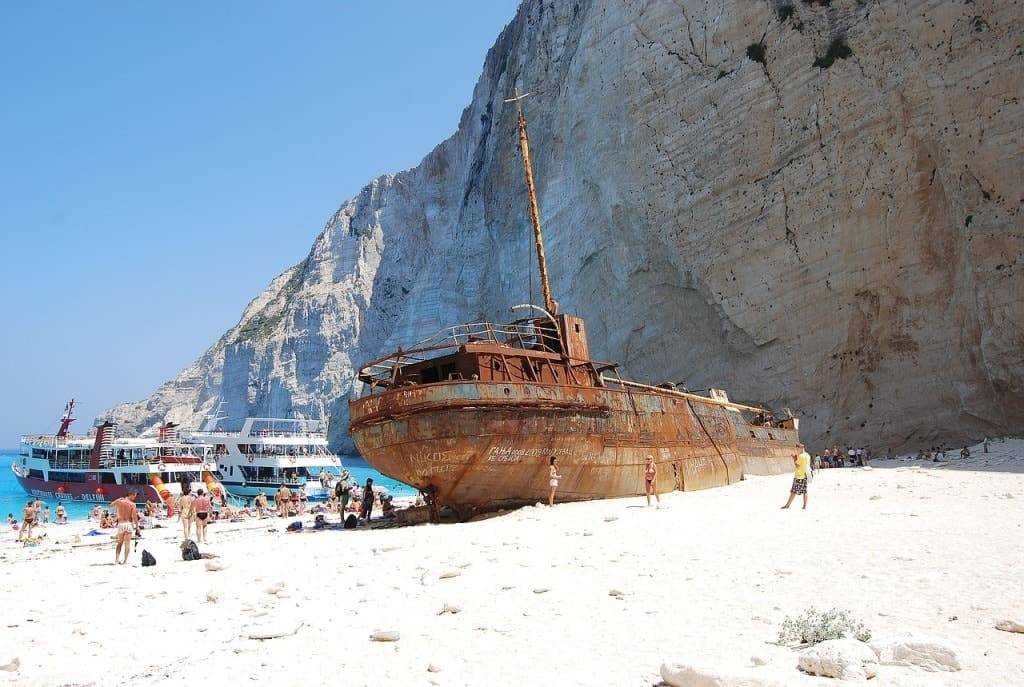 If you’re a photographer or someone who seeks solitude, get a local fisherman to take you to the beach for sunrise or visit out of season.

This long stretch of sandy beach is known for being the nesting site of loggerhead sea turtles and is part of the national marine park so is off limits 30 minutes before sunset until 30 minutes after sunrise. During the day time, it’s a popular organised beach with sunbeds though you’ll also find space to lay your towel down away from the crowds as you admire the cliffs and the turquoise water.

This picturesque white pebble beach requires a hike down many steps to get to but it’s well worth the effort as this beach has sulphur springs that turn the water a milky blue white colur. There’s no need to go to the spa to relax when nature can do it for you for free though you do need to be aware of the rotting egg smell – Don’t worry, you’ll soon get used to it! 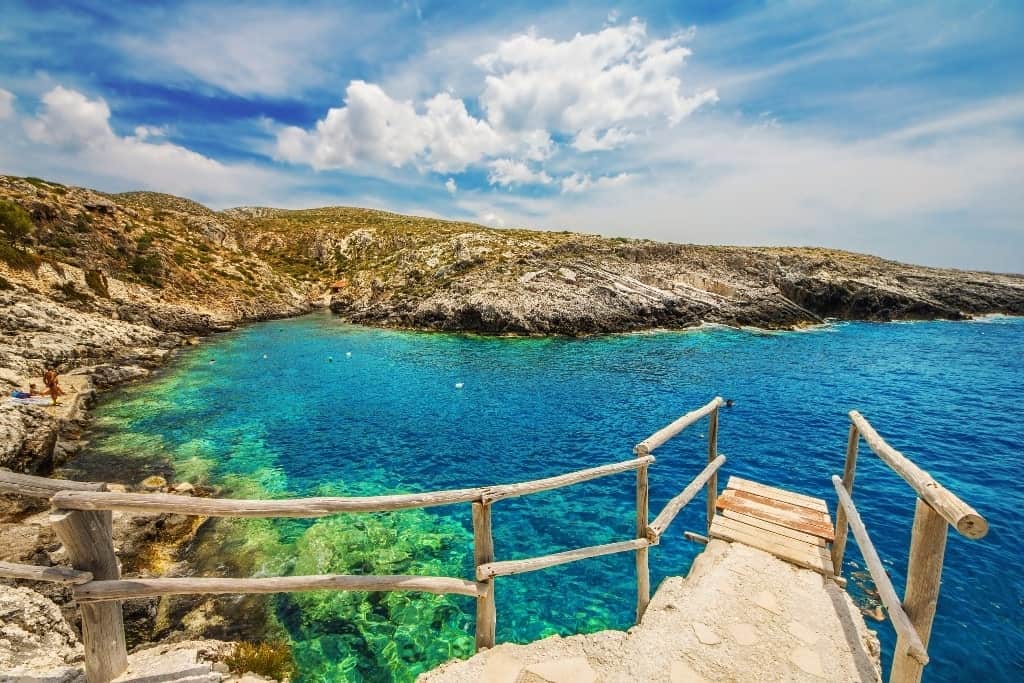 This is a rocky cove rather than a beach with sand though it is still possible to lay down on the rocks and sunbath, or on a slightly more comfortable sun lounger that you can rent. Enjoy diving from the cliffs if you’re a bit of a daredevil, or make the most of the snorkelling opportunity in the deep water, just know that this place isn’t the best for young children.

Another picturesque white pebble beach with a limestone cliffs backdrop, the sea making an inlet just perfect for flying a drone over! This beach might be small but the water is deep, ideal for cliff diving but also snorkelling with many day trip boats departing from here enabling you to combine a beach day with a sightseeing trip to even more picturesque beaches!

Check out the best beaches in Zakynthos.

Things to do in Zakynthos – Museums

Learn about the endangered loggerhead sea turtles (aka Caretta-Caretta) that nest on several of Zakynthos’ beaches as well as other species found on and around the island, both fauna and flora. An interesting place for nature lovers to learn more whilst also teaching children about our environment.

Discover Zakynthos’ naval history from the 17th century up to the present day. Located in Tsilivi, the naval museum shows the evolution of maritime history in a collection of watercolour paintings and with a collection of Byzantine ship models, photographs, uniforms, and other memorabilia.

This fairly new museum, located in Agia Marina village, helps visitors to understand how unique Zakynthos is with its wide variety of flora and fauna (1,500 specimens and species are represented) that is supported by a variety of ecosystems ranging from the sandy beaches to the green forests.

Step back in time and see how things used to be done in Zakynthos and rural Greece as a whole. Located in the village of Pigadakia this museum is the recreation of a traditional homestead. Move through the rooms of the house with traditional furniture, objects, and handicrafts before going outside to see the old machinery used for pressing grapes and olives along with tools dating back to the 16th century.

Things to do in Zakynthos – Historical Sites

Completed by the Venetians in 1646, this imposing fortification located on top of Bohali hill in Zakynthos Town protected locals from pirate attacks as well as later attacks from the Turks. Enjoy the views overlooking the city as you walk around the grounds tracing history back to Medieval Zante, remembering that the current fort was built on the site of a much older acropolis.

The 12th century Byzantine church of Sotira aka Pantokratoras as well as the 14th century church of Aghios Frangiskos are just 2 of the sights to be seen within the grounds.

Dating back to the 1660’s this aristocratic villa in Zakynthos Town (belonging to the Roma family) is one of the few buildings that survived the 1953 earthquake. It has been restored so visitors can admire the lavish interiors with traditional furniture, paintings, books, and other objects.

This is where writer and poet Dionysos Solomos wrote the lyrics for the Greek national anthem as well as the poem Eleftheri Poliorkimeni which translates as ‘free besieged’. Enjoy the view out to Tsilivi, pay your respects at the monument, and see if you’re inspired to put pen to paper.

Located moments away from the tourist hotels you’ll  find Argassi Bridge, the remains of a Venetian bridge that stands half submerged. Dating back to 1885 it was once the main coast road on the island before the coastline eroded back to its present position. There is also a hidden aqueduct on the outskirts of Argassi, the partial remains are Venetian and located in tranquil solitude, mostly forgotten about and visited by few.

Things to do in Zakynthos – Churches & Monasteries

Agios Nikolaos Chapel aka The Church on the Sea

This small yet beautiful white chapel with vivid red doors and windows only opens its doors for weddings but you can still admire it from outside – It’s very photogenic with its coastline location on the peninsula.

With its beautiful sea views, the Venetian style St George Krimnon Monastery is set around a picturesque courtyard with the monk’s residences on one side, the ruined circular watchtower in the centre (built to defend the monastery against attack), and the church on the other side. 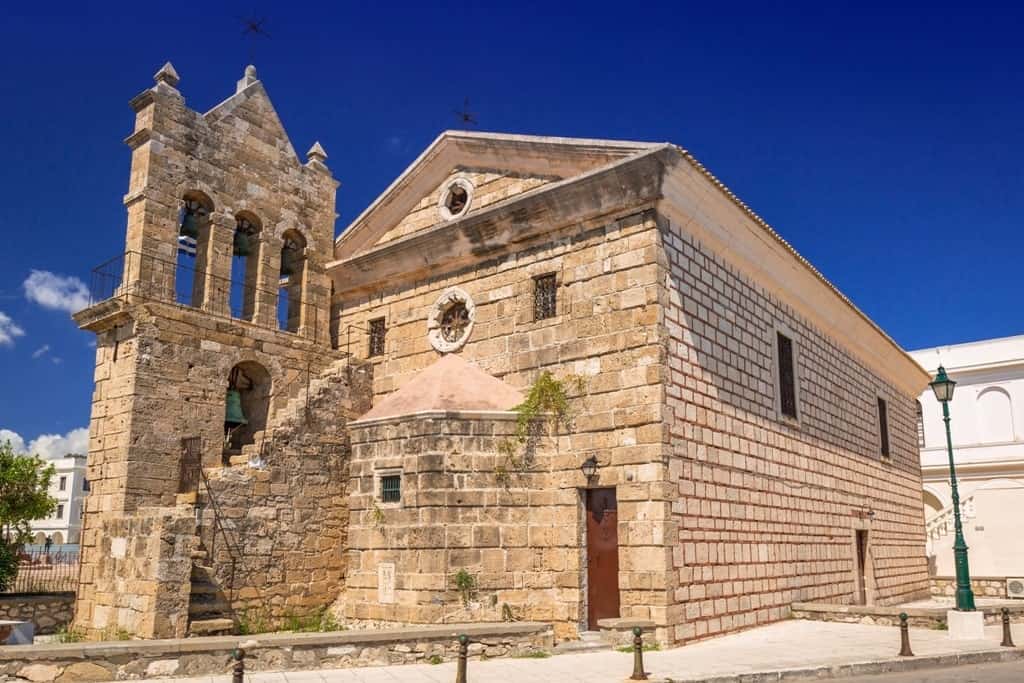 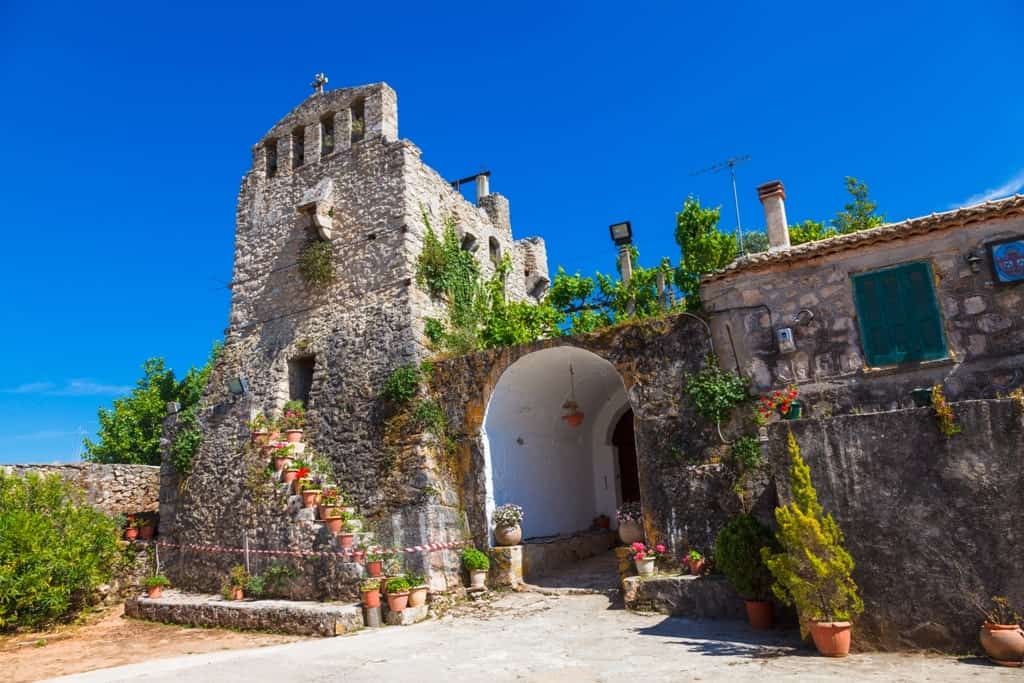 This monastery was the place where St. Dionysios took refuge. It contains a 15th century partly ruined tower, originally built as a watchtower but now used as a bell tower. Inside the church visitors can see many frescoes along with a valuable 15th century icon of the Virgin Mary.

Built in 1948 (and withstanding the 1953 earthquake), this is the largest church on the island of Zakynthos. You’ll see its bell tower standing tall over the city (a delight at night when it’s lit) but be sure to step inside during the day to see the Greek Orthodox frescos. 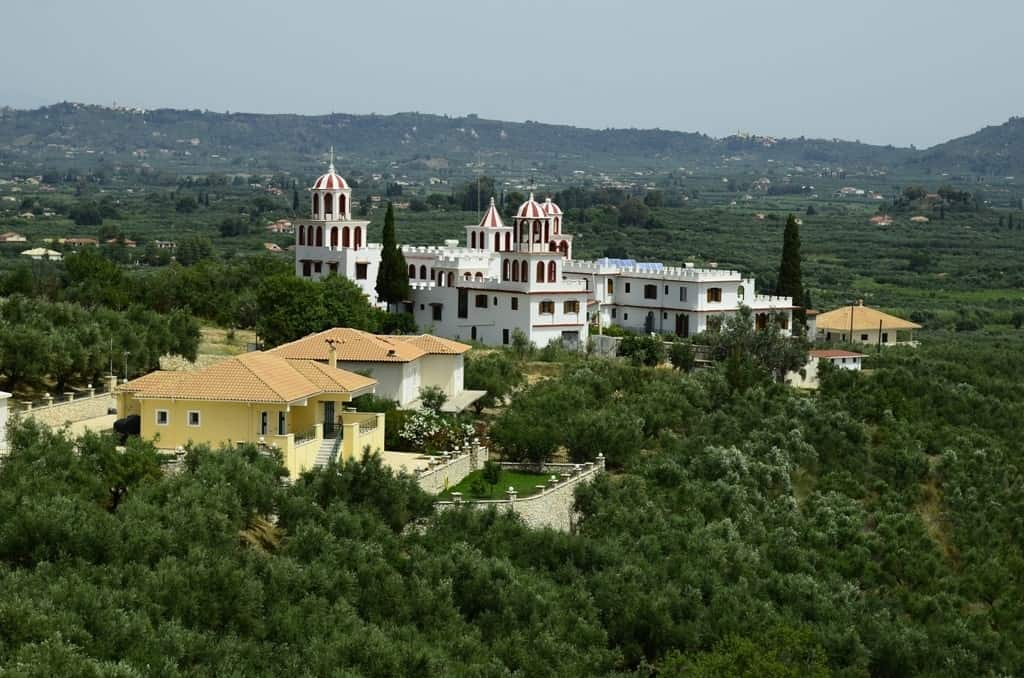 Located close to the village of Lagopodo, you can’t miss this striking red and white monastery that looks more like a castle! Today is it the residence of nuns, visit inside to admire the architecture, the views over the plateau, as well as the simpler way of life.

More Things To Do in Zakynthos

Scream in delight as you enjoy the only public water park on the island; Zante Water Village which is also one of the largest water parks in the whole of Greece. From the 9 attractions you can thrill your senses as you travel down the innovative Boomerbowl tube ride, free fall down the high-speed kamikaze Thrill Tower, float along the 300m long Lazy River, splash around with the Aqua Spray Games or simply hang out in the jacuzzi.

You can’t visit Greece without kicking your feet up in the air and shouting oopa! Enjoy an evening of Greek cuisine, local wine, music, and dancing in a family friendly environment at the traditional taverna with home cooking located in the picturesque village of Agios Dimitris.

1 thought on “Things to do in Zakynthos (Zante), Greece”