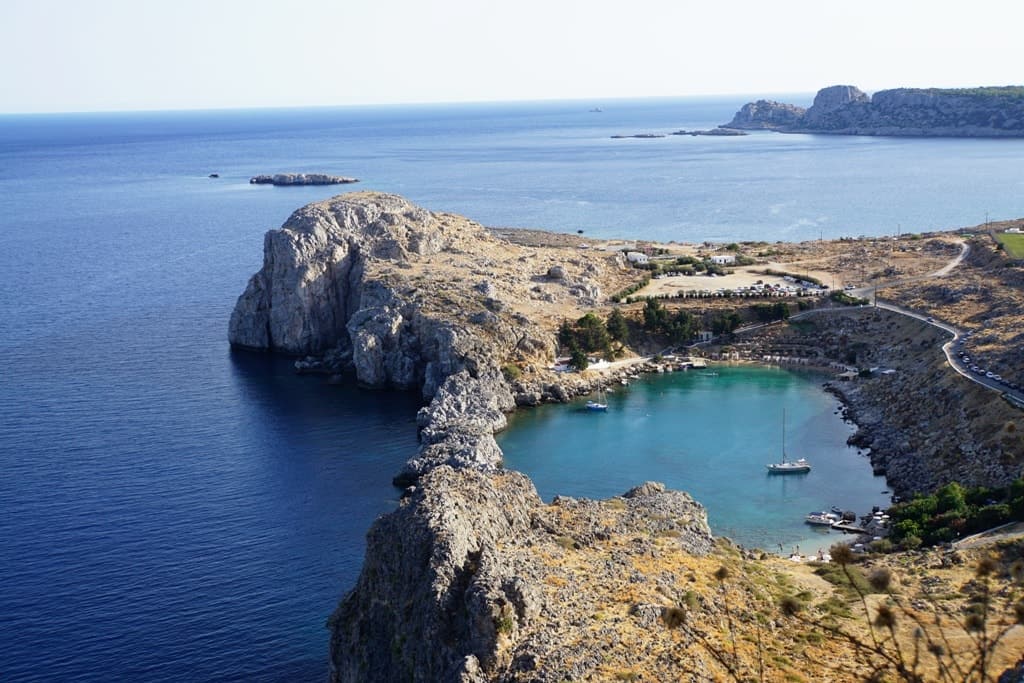 Lindos is a beautiful village on the Greek island of Rhodes. It is situated 55 km away from the town of Rhodes and 50 km away from Rhodes airport. Although Lindos is a small village there are many things to do and see when you get there. Lindos is very picturesque with white houses, two beautiful beaches within walking distance, and a very important archaeological site, the Acropolis of Lindos. In this post find the best things to do in Lindos village in Rhodes.

A Guide to the Best Things to Do in Lindos Rhodes

How to get to Lindos Rhodes

There are a few ways you can get to Lindos.

By car: The road going to Lindos is good with a lot of signs. Going by private car is the fastest way to get to Lindos apart from the taxi. Lindos is 50 km away and you will need around 50 minutes to get there.

By taxi: You can go to Lindos by taxi but it is quite expensive. From the airport which is 50 km away, it will cost you around 70 euros and from the city center of Rhodes 62 euros. For more info on taxi prices in Rhodes, check here.

By bus (Ktel): You can get the bus to Lindos, it is quite cheap but it takes a lot of time because it makes a lot of stops on the way. From Rhodes town to Lindos the bus takes 1h 30m and it costs 5,50 € one way.

By Boat Tour: If you’re staying in Rhodes Town but want to visit this gorgeous coastal destination, you might want to opt for a Full-Day Boat Trip to Lindos, stopping off at a collection of magnificent beaches en route to/from Lindos. This trip will take you down the east coast of the island anchoring in Lindos to explore the town and Ancient Acropolis before traveling back to the capital and enjoying some swims in beautiful bays along the way. – Click here for more information and to book this tour.

By a Bus Tour: If you’re not one for traveling by boat you may prefer the standard Day Trip to Lindos from Rhodes Town which allows you to take a direct bus transfer from your hotel. This tour gives you four hours of free time during which to explore Lindos and the Acropolis, meaning you’ll have time to see all the highlights as well as enjoying a spot of lunch overlooking the bay. Click here for more information and to book this day trip.

10 Must-Do Things to Do in Lindos, Rhodes

1. The Acropolis of Lindos Rhodes

The Golden Age of Lindos was between the 7th and 6th century B.C. Lindos played at the time a leading role in the Greek colonisation movement and it was a major trading centre. In the 6th century B.C. it was ruled by Cleobulus, one of the seven sages of Greece.

During his time the temple of Athena was built, on the site of an earlier structure. At the Hellenistic and Roman times, more buildings were added. In the 14th century, the Knights of St. John built the fortress in order to defend the island against the Ottomans.

As you enter the archaeological site of the Acropolis you will see a relief of a boat carved into the rock that dates from 180 B.C. Then you will climb a large stairway that leads to the administrative buildings of the Knights. As you pass through them you will arrive in an open space.

On the first level, there is the Byzantine church of St. John built around the 13th or 14th century on the remains of an older church, the remains of a temple probably from the Roman period, a large Hellenistic stoa, and the stairway to the Propylaia.  On the top of the stairs is the temple of Athena Lindia among other buildings.

The view from the Acropolis is incredible. From there you can see the white houses of the village of Lindos and the main beach along with the beautiful St Paul’s bay.

Try to go to the Acropolis as early as possible because it can get very hot. Put some sunscreen, a hat and take some water with you.

You might also want to check out: what to see in Rhodes from Lindos to Prasonisi.

2. The ancient theatre of Lindos

The ancient theatre of Lindos is a site that is often overlooked in favour of the Acropolis and main town, but this archaic amphitheatre is a fascinating attraction. Dating back to the 4th century BC, the ancient theatre of Lindos had a grand stage and orchestra as well as capacity for around 1800 spectators and was often used for musical shows and athletic competitions. The site is located just 10 minutes from the central square in Lindos and is free to visit.

3. Check out the Church of Panagia

The Church of Panagia in Lindos is a small but intricate chapel that features a typically Rhodian campanile tower and impressive pebble mosaic flooring. The interiors are arguably the most famous thing about this church with colourful frescoes, wooden iconostasis and beautiful hanging chandeliers.

4. Get lost in the alleyways of Lindos village

Lindos Village has long been regarded as one of the most beautiful destinations in Rhodes and as you begin to get lost in the meandering alleyways you’ll start to see why. The village is filled with quaint boutiques, white-washed houses and small bars and restaurants that boast beautiful terraces and views out to sea.

As you wander through the streets, you’ll see a number of souvenir shops and boutiques that sell everything from hand-made crafts and designer clothing to local produce such as olives, oil and herbs and spices. This can be a lovely way to while away the time with the shaded streets offering a brief moment of respite from the midday sun.

St Pauls Bay aka Paralia Agios Pavlos is a picturesque bay just down from the main village that can be seen from the Lindos Acropolis. This is the perfect place to take a cooling dip after exploring the archaeological site and there are sunbeds, parasols, and a cafe available.

The water is clear and shallow (with rocks around the edges) so it’s great for families, just be aware that boats do come and go throughout the day.

An alternative place for a swim is Lindos Beach, the main stretch of sand near the town. This beach is much larger than St Paul’s Bay and therefore offers more options in terms of sunbeds and tavernas. While the walk down to the beach is pretty steep and strenuous, there is a shuttle service available at the peak of summer.

Check out the best beaches in Rhodes!

8. Check out the views from the main road at the entrance of the village

While the beaches and streets within Lindos are stunning and worth exploring in themselves, it’s also important to pause and take in the views from the main entrance to the town as you arrive. This viewpoint will give you a panoramic vista of Lindos, including the village, coast and Acropolis so you know what’s in store for your visit!

9. Don’t ride the donkeys (they usually get you to the Acropolis of Rhodes)

While it may be tempting to take a donkey ride up to the Acropolis instead of walking up the hill, I urge you to reconsider. Temperatures in Greece in summer can soar and while some people may care for their donkeys, on the whole, they are overworked and underwatered.

Yes, donkeys have been used as work animals for centuries, but that doesn’t mean they’re equipped to carry large humans up steep hillsides. Instead, follow the signs to walk up to the Acropolis ensuring you have plenty of water to hand and some decent footwear. It may be strenuous but it will be more than worth it and you’ll feel proud you did it rather than relying on the strength of a poor, tired donkey.

10. Enjoy a drink in a rooftop bar

As the sun begins to go down in Lindos, you might want to take advantage of one of the many rooftop bars that overlook the town, coast, and Acropolis. One such bar that is well worth a visit is Cozze & Champagne, a chic cocktail bar and restaurant that serves up fresh seafood, premium spirits, and drinks with a twist. The bar often features some of the island’s top DJs playing a relaxing mix of deep house and afro music.

Where to stay in Lindos Rhodes

Here are my picks for the best accommodations in Lindos, Rhodes:

Aqua Grand Exclusive Deluxe Resort: An adults-only deluxe hotel located 1km away from Lindos town at the seafront. It offers elegant rooms with a private balcony, air conditioning, free wi-fi, and balconies with Aegean Views. Other hotel amenities include three swimming pools, many dining options, and a spa. – Check out the latest prices and more information.

St Paul’s Fedra: Only 1 minute away from St Paul’s beach these furnished studios offer an equipped kitchen with a fridge, kettle, and a stovetop, air-conditioned rooms, and free wi-fi. Check out the latest prices and more details.

Lambis Studios & Apartments: Just 12 minutes walk from the beach and the center of town, it offers studios with a kitchenette, private bathrooms with a shower, and a balcony. Other hotel amenities include a swimming pool, a children’s pool, a children’s playground, & free Wi-Fi. – Check out the latest prices and more details.

Lindos Athena Hotel: Offers basic air-conditioned accommodation within walking distance from Lindos town and the beach. Rooms are also equipped with a fridge and a safety box. A swimming pool, a poolside snack bar, and free Wi-Fi can also be found at the property. Check out the latest prices and more details.

Have you ever been to Lindos Rhodes?  What did you enjoy the most?