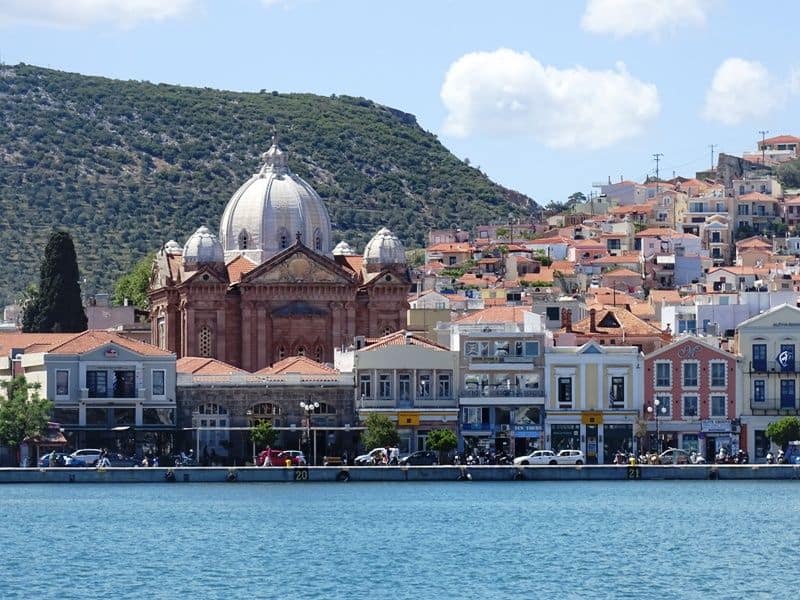 Mytilene is the capital of the Greek island of Lesbos. It is built on seven hills, and it’s dominated by the Gateluzzi castle and the church of St Therapon with its impressive dome. Mytilene town is the first thing you will see if you arrive in Lesvos by boat. The town is also very lively from the early morning till late at night with the many shops, cafes, bars, and restaurants. I spent a full day in Mytilene town, and I can say there are a lot of interesting things to do.

A Guide to Mytilene, Lesvos

Visit the castle of Mytilene

The castle of Mytilene, one of the biggest in the Mediterranean is located on the top of a hill in the northern part of the town. It was probably erected during the Byzantine period on top of an ancient Acropolis, and it was renovated by Francesco Gattilusio, when his family took control of the island. Today the visitor can walk around the castle and visit, the cistern, the Ottoman baths, the Crypts and the Queen’s Tower among others. The view of Mytilene town from the castle is magnificent. During summer, the castle hosts many cultural events.

Special thanks to archaeologist Georgia Tampakopoulou, for showing us the castle of Mytilene.

Check out the New Archaeological Museum of Mytilene

The archaeological museum of Mytilene is housed in two buildings very close to each other in the center of the town. On my recent trip, I had the chance to visit the new building that houses finds from the Hellenistic and Roman Lesvos. Some of the exhibits include mosaic floors and friezes from Roman villas and various sculptures. The museum is very impressive and it definitely worth’s a visit.

Special thanks to archaeologist Yiannis Kourtzellis for showing us the museum.

Ermou is the main shopping street of Mytilene town. It is a beautiful street with lovely buildings, shops selling souvenirs and traditional products of the island. As you walk along the street, you will also see the Yeni Tzami, a 19th century Turkish Mosque. One of the most impressive things on that road is the first sight of Agios Therapon Church as you walk towards it.

Visit the church of St Therapon and the Ecclesiastical Byzantine Museum

The impressive church of St Therapon dominates the sky of Mytilene town with its beautiful dome. The church has a very distinctive architecture as it is made with many architectural styles; Byzantine and Gothic with Baroque elements. Opposite the church, there is the Byzantine Museum with an extensive collection of icons dating from the 13th to the 19th century.

Learn how Ouzo is made at EVA distillery

Lesvos is considered the capital of ouzo. The aniseed which is used in the production of ouzo and gives it its distinct flavour is cultivated on the island in an area called Lisvory. The consumption of ouzo is a whole ritual not only in Lesvos but Greece in general.  Ouzo is always accompanied by appetizers that can be anything from cheese, olives to fresh seafood.

Coming to Lesvos and not visiting an ouzo distillery is a great omission. On my recent trip to the island, we had the chance to go to Eva distillery located on the outskirts of Mytilene town. It’s a family-run distillery which produces many different kinds of Ouzo, Dimino (which is my favourite), Mitilini and Sertiko.

Apart from the ouzo, the distiller makes a liqueur called Mastiha Tears made from mastic from the nearby island of Chios. At the distillery, we had the chance to learn how ouzo is made and bottled. We also tasted the different kinds of ouzo and the mastiha liqueur and visited the distillery’s museum.

For more information about the EVA distillery and ouzo you can read Amber Charmei’s post: The Ouzo of Lesvos I: Essentials.

Special thanks to Eleni, chemist of EVA distillery for showing us the process of making ouzo.

Walk around the town and see the beautiful mansions

You only need a short walk into Mytilene to realize how many beautiful neoclassical mansion it has. These houses were built during the 18th, 19th and the beginning of 20th century when Mytilene was a big financial and commercial center. 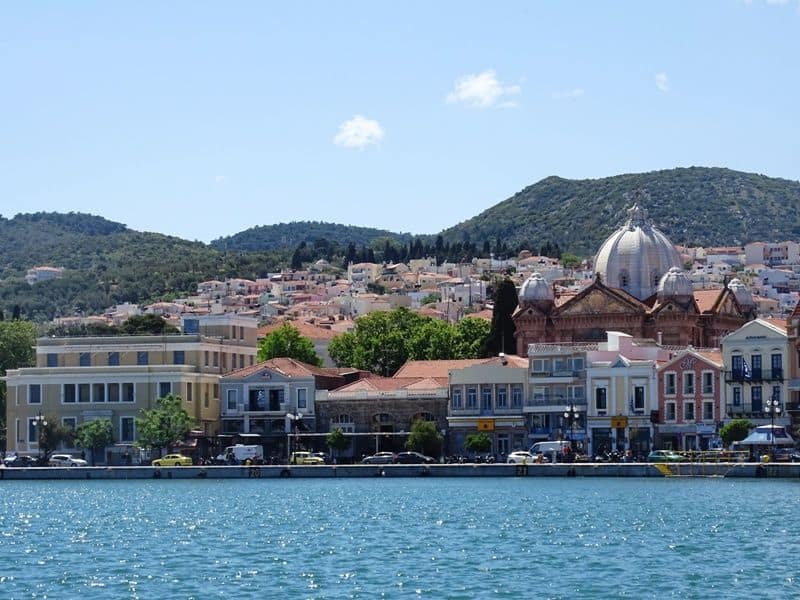 The island had many commercial relations with Europe and Minor Asia that influenced the way of life, the arts and architecture. As the residents of the town wanted to show their wealth, they built these grant mansions. They combined architectural elements from both the Greek and European architecture.

Where to eat in Mytilene town

During our visit to Mytilene town we had the chance to enjoy an excellent meal at the marina yacht club. The yacht club is situated on the waterfront, and it’s the ideal place for coffee, drinks or food. They offer a great menu that combines modern cuisine with traditional Greek ingredients. I will let the photos speak for themselves.

If you are going to Lesvos island, don’t forget to spend some time exploring Mytilene town as it has a lot to offer.

Have you been to Mytilene? Did you like it?

Wondering whether it’s safe to visit Lesvos? Then check my post Is it safe to travel to Lesvos? Definitely!

For more travel inspiration on Lesvos check my post about the picturesque village of Molyvos.