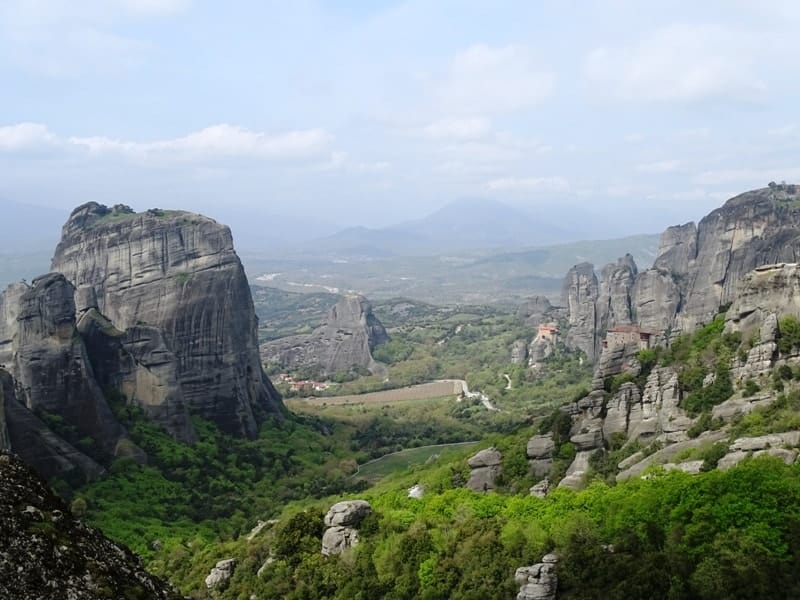 Situated in the prefecture of Thessaly, in Central Greece, Meteora is a unique natural wonder you shouldn’t miss. The sight of giant rock pillars that reach the sky and a couple of monasteries on top of them is a sight that will leave you speechless. You can read more about Meteora on my post: A full guide to the Monasteries of Meteora in Greece. On my recent visit to Meteora with Travel Bloggers Greece, we did the classical tour Ancient Meteora and Holy Monasteries with Meteora Thrones.

Interested in getting from Athens to Meteora? Read my guide here.

The company’s luxurious van picked us up from our hotel in the morning. During our short ride to the Meteora rocks, our local guide Dimitris told us about the history of the town of Kalampaka, how the rocks were created and how the monasteries were built. Our first stop was at the Monastery of St Nicholas Anapausas that dates back to the 14th century.

It is the first monastery one encounters when one comes from the village of Kastraki. Due to the limited space of the rock, the monastery was built on floors, one on top of the other. The monastery is famous for its wall paintings made by the famous Cretan painter Theophanis Strelitzas Bathas. We didn’t visit the monastery but took a lot of pictures and learned its history.

We then headed towards the Monastery of Great Meteoron, the largest and one of the oldest monasteries in Meteora. It was built in the 14th century by St Athanasios the Meteorite. We had the chance to visit the monastery the previous day; you can read all about it in my post: A hiking tour in Meteora Greece.

After taking photos, we followed the road towards the Monastery of All Saints (Varlaam). It was first inhabited during the first half of the 14th century, by the hermit Varlaam. Until the 20th century access to the monastery was through a net and a rope ladder. Now there are many steps carved on the rock.  There is a beautiful church on top with beautiful paintings. Don’t miss the wine cellar with the huge wooden barrel that carries up to 11 thousand litres of wine and the incredible views of the valley.

After spending some time in the monastery, we drove towards the Monastery of St Stephen just to take photos. The Monastery of St Stephen is a nunnery, and it’s easily accessible compared to the others by a small bridge. We have already visited the monastery the previous day. You can read all about it in my post: Meteora Sunset tour. Our next stop was Monastery of the Holy Trinity. I was very excited to visit the particular monastery as it was the only one I missed on my last visit to Meteora.

The Monastery of Holy Trinity is among the most impressive ones to look, and it’s also very well known from the James Bond film “For your eyes only.” It is challenging climbing on top of it but once there the view will reward you. The monastery was built in the 14th century and again until recently the only access was through a manual lift made by ropes which you can still see today. Nowadays there is also a lift.

After visiting the monastery, we headed towards our last visit for the day the Monastery of Rousanou. On our way there we made a few stops just to take the perfect picture and to admire the impressive views. The Rousanou Monastery is a small but elegant monastery run by nuns. It has great views from the top and a beautiful church worth visiting. The sisters also sell products made by them like honey, herbs, and soap.

That was the end of our fascinating tour around the impressive monasteries of Meteora.

Please note that there is an entry fee of 3 € p.p for non-Greek citizens to each monastery.

If you are coming to Meteora, a tour to the Monasteries is an experience you shouldn’t miss.

I was a guest of Meteora Thrones but as always opinions are my own.

2 thoughts on “A tour to the Holy Monasteries of Meteora”