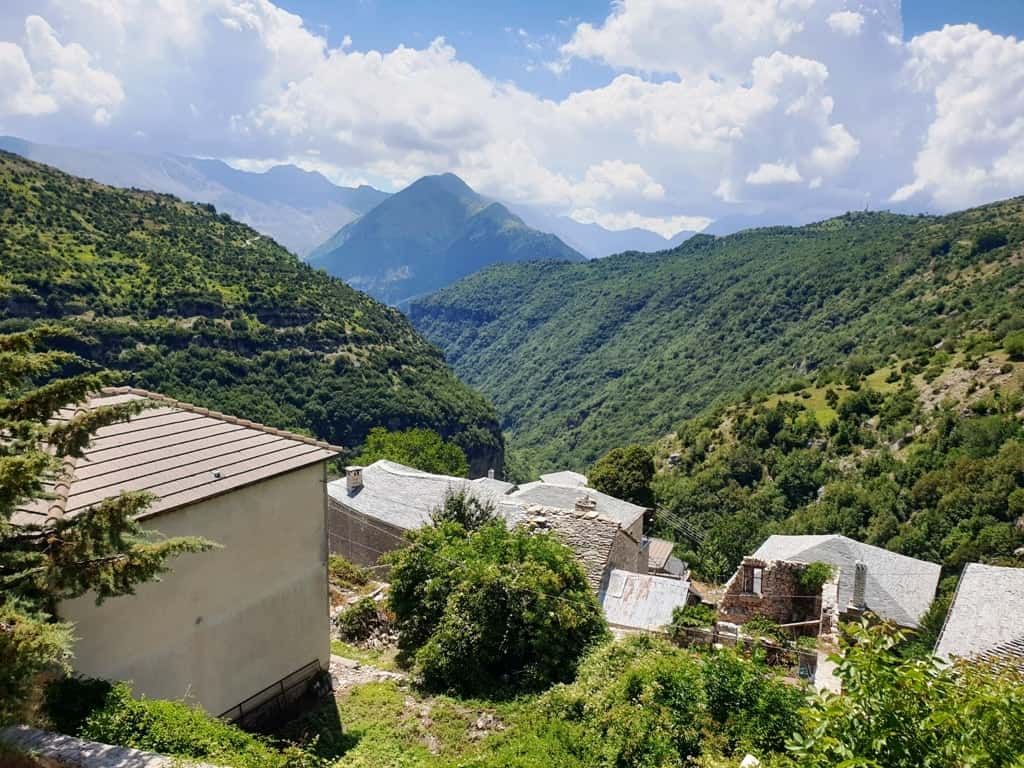 The Villages of Tzoumerka – the Tzoumerkohoria – are like a fairy tale land, a region of northern Greece so rugged and remote it’s like stepping back in time. The mountain hides 47 villages, some with only a few permanent residents, and monasteries that appear on the side of a mountain as if they had grown there. Some villages have been inhabited since the Bronze Age. Many villages are linked by stone bridges, similar to those of the Zogorohoria.

The Plaka Bridge, a stone arched bridge over the Arachthos River, is most well known for being the natural border between the Greek city-state and the Ottoman Empire; the bridge collapsed in 2015; as of summer 2020, it has been restored.

The region is known for its natural beauty, from jagged mountains to rushing rivers. It is chock full of canyons and gorges, lush valleys, and winding hiking trails. There are also seemingly thousands of religious monuments and churches, including the Red Church, Vyliza Monastery, or the incredible Kipina Monastery.

Syrrako Village is built on the slopes of Mount Lakmos, separated from its twin village Kalarites by the deep ravine of the river Chroussias.

It was well-known during the Ottoman Empire for its textile production and trade with many other Mediterranean countries. Syrrako is also the birthplace of Kostas Krystallis, author and poet of “Mountain and Stable”, “Stavraetos”, “Shades of Hades” and “Vlachoi of Pindos.” You can visit his former home, which is now a folklore and local museum.

Between Syrrako and Kallarites you will find the Kipina Monastery. It is located on a rock face – literally – and accessible by a thin path and rock bridge that leads you up the cliff to the monastery entrance. There are no monks living in the monastery these days, but you can take the key from a local coffee shop.

In Kallarites, stop for lunch at Napoleon Zaglis’s kafeneion, a taverna that has been in Napoleon’s family since the 1840s. Go for the hearty home-cooked dishes, stay for the views over the mountains and the stories shared by Napoleon and his wife.

These two villages were very prosperous during the 18th and 19th century, but declined following the Ottoman Empire. They both deserve explorations on foot, over the cobblestone paths and past the old stone mansions. The old Vlach language, Aromanian, is still spoken in some of the villages. This is a language similar to Romanian that is spoken south of the Danube in northern Greece, Albania, and others.

You might want to check out: Tzoumerka, best things to do and see.

Pramanta Village and the Anemotrypa Cave

Pramanta Village is located on the slopes of the Strongoula. Houses are built in amphitheatre style on the slopes of the hill, while the church of St. Paraskeui and the Arapis fountain are located at the centre of the village. Pramanta has stunning views of the mountains.

The Anemotrypa cave was discovered in 1960 by two residents. Because of the pure limestone found inside, it is known as the “white cave of Greece.” There is a small path you can follow through the cave levels. Tours are available and guides speak English.

Matsouki is the third village that speaks the Vlach language. It is located on the western slopes of Kakarditsa, the highest summit in Tzoumerka, and is surrounded by other high, lush, mountain peaks. The surrounding valleys are deep and canyonlike at times and feature some impressive waterfalls and rapids. In the past, Matsouki was well known, like Syrrako, for its textile production.

And like the other Vlach villages, it too rebelled against the Turks until it finally succumbed. Matsouki is a beautiful town with raw stone buildings, narrow streets winding up the mountain, and many tiny churches in the region. The most impressive one is St. Athanassios, which precariously hangs on the edge of the cliff.

Close to Matsouki village is the Vyliza monastery, also spelt Vylissa, which lies in a mountain valley between Matsouki and Kallarites, on the slope of Kritharia. The name Vyliza comes from the Latin Vigilo, meaning “guardian,” and the monastery is dedicated to the Annunciation.

According to legend, the monastery was founded in the 11th century, and until the late 1800s was one of the most important monasteries in the area, with an impressive library. In 1893, it was abandoned and fell into ruin, but was restored in the 1980s. The hike from the village takes about 30-40 minutes.

The icons from the monastery are kept in a small museum at Matsouki village.

On the way to the Kalentzi village, you must check out the Plaka Bridge. Originally built in 1866, after two other unsuccessful attempts to build a bridge across the Arachthos River, it is the third-largest single-arch bridge in Europe and often considered one of the most difficult to construct.

The bridge was damaged by the Germans in the Second World War, but did not collapse, and was repaired. In 2015, the entire bridge collapsed during a flash flood. Construction to rebuild it began, and in February 2020, it was finally complete. The new bridge is built entirely of stone in the manner of the original construction and has no metal or hidden supports, nor was modern technology used to rebuild it.

The Museum of Theodoros Papagiannis

Theodoros Papagiannis is a well-known contemporary artist/sculptor with work found in many museums around the world. His “Runners” statue is located at Chicago’s O’Hare Airport.

The Museum of Theodoros Papagiannis is located in his hometown of Elinnikon, Ioannina, in a former school building. Every summer, he invites students and sculptors to spend time at the museum creating works of art that line the road to the nearby monastery.

Where to Stay in Tzoumerka

The Anavasi Mountain Resort is a perfect base for exploring the Tzoumerka region. Rooms are spacious and feature balconies overlooking the mountains, while the pool and sauna are available to all guests who want to relax after a day of walking or hiking.