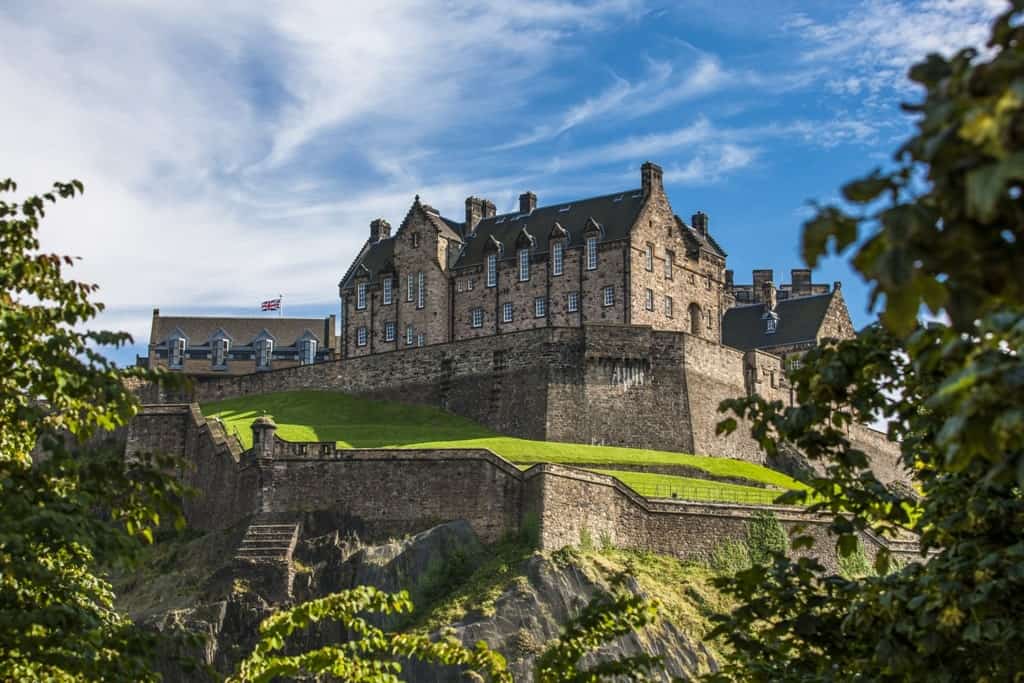 If you’re looking to do 2 days in Edinburgh, you have a lot to see in a short time, but it is possible. Edinburgh is one of the United Kingdom’s top tourist attractions – attracting around two million foreign visitors yearly. The city is home to 112 parks, plus more trees per head than any other city in the UK. Also, Edinburgh is a relatively small city, with a population of about 537,000.

Visitors love the city for the cosmopolitan nature, captivating history and tasty food. Here is a fantastic 2 day Edinburgh itinerary for you!

Two Days in Edinburgh: Where to stay

Hotel Indigo: The Hotel Indigo is a superb boutique hotel in New Town’s York Square, and the hotel offers charming rooms that reflect Edinburgh’s ancient history and culture. It is also the perfect location for business and leisure travelers. Click here for more information and to check the latest prices.

How to spend 2 days in Edinburgh: A perfect Itinerary

Edinburgh in 2 days: Day One

Edinburgh Castle is one of Europe’s oldest fortified places. It has a vast history, a fortress, a military garrison and a royal residence. There isn’t a better spot in the city to observe Edinburgh, offering majestic 360-degree views of the city.

The castle dates back to the second century AD. However, by the 17th century, it became a military barrack before becoming a major British tourist attraction today.

The Camera Obscura and Experience Illusions are fantastic if you’re with the children. You’ll get incredible views of Edinburgh, and the attraction is home to various interactive exhibits.

The interactive exhibits show puzzles, optical illusions, a vortex tunnel, and puzzles. To this day, it is the oldest purpose-built attraction in the United Kingdom.

Scotch is the national drink of Scotland, and visiting the Scotch Whiskey Experience is the ultimate experience if you love whiskey. There are various tours varying from between one hour and three hours.

One tour option is to dine within the collection, where you’ll sit amidst thousands of bottles and have a whiskey sommelier teach you about whiskey. Also, you’ll find a collection of 3,380 bottles collected by a Brazillian Whiskey Collector.

Click here to book your guided tour and whisky tasting.

Lunch at the Witchery by the castle

The Witchery is a luxury boutique gothic hotel that you’ll find hidden at the top of the Royal Mile. It has a superb restaurant hidden between a series of buildings on Castle hill. There are lunch menus, afternoon tea, and dinner menus offering the finest Scottish produce.

There are various guided tours, and all the tour guides dress in costumes. It is a unique historical attraction and a must-see on a 2 day Edinburgh itinerary.

Click here to book your tickets to the real Mary King’s close.

King David I founded St Giles Cathedral in 1124, and it is one of Edinburgh’s most beautiful buildings. Visitors love the guided rooftop tours from where you can see incredible views of Edinburgh.

The church is the principal spot of worship for the Church of Scotland, and it is sometimes regarded as the “Mother Church of Presbyterianism.” You can find the church on The Royal Mile, just below Edinburgh Castle.

The Royal Mile is Edinburgh’s central high street, and it is a bustling series of streets full of shops, restaurants, and cafes. Locals coined the name “Royal Mile” in the early 20th century. There are various streets in the royal mile – Lawnmarket, Castlehill, Canongate, High Street, and Abbey Strand.

The stretch is around one mile long, and you can find many hotels, pubs, and tourist shops within close proximity of each other.

You can see various monuments inside the gardens, such as statues commemorating Sir Walter Scott, David Livingstone and Lord Provost Adam Black. The gardens are an excellent place to relax during the summer with plenty of spots for the family.

If you love shopping, you have to visit Princes Street and George Street – both streets are Edinburgh’s premier shopping streets. There is an array of Flagship Scottish stores, including Marks & Spencer, Topshop, and Topman, House of Fraser, and Debenhams.

You can also find various high-end brands such as Lakeland, Jo Malone London, Jaeger, Jigsaw, and Anthropologie. The streets do get busy, but the streets are a must-see on an Edinburgh itinerary if you love shopping.

Admire the sunset from Calton Hill

Carlton Hill offers excellent Edinburgh views at any time of the day, but they are exceptionally superb at sunset. You’ll find the home of the Scottish Government at the Southern Hill slope, Holyrood Palace, the Parliament Building, and the Royal Mile at the hill’s base.

Also, there is the national monument at the top of Carlton Hill – an unfinished replica of the Athens Pantheon, it is dedicated to the people who lost their lives in the Napoleonic Wars.

Holyrood Palace is the official Scottish residence of the British monarch. It has been the home of many Kings and Queens of Scotland for centuries. Notable figures who have lived here include Mary Queen of Scots, Comte d’Artois, Bonnie Prince Charlie, and Louis XVI’s younger brother.

King David I of Scotland built the palace to serve as a monastery in 1128. Also, when the queen is not in residence, the palace is open for public tours.

Click here to book your tickets to Holyrood Palace.

Dynamic Earth is a fantastic family attraction that tells the story of the planet. Visitors love the multi-sensory and interactive experience that shows the growth of the solar system. You can feel a polar ice cap grow cool beneath your hands and feel a volcano shake the earth.

Guests also enjoy the 360-degree-dome cinema where you can learn about super-volcanoes with the help of excellent surround sound.

Hiking Arthur’s Seat is an incredible way to see Edinburgh from above. There are two volcanic crags in Edinburgh – Castle Rock and Arthur’s Seat. You can find these crags in the Queen’s Gardens, behind Holyrood Palace.

There are numerous hiking routes to the top, and they are popular trails for locals and visitors alike. Make sure you visit at sunset for the best views.

The Royal Yacht Britannia is Queen Elizabeth’s former yacht, and the vessel was in service from 1954 to 1997. The John Brown & Co Shipyard in Clydebank built the ship in the early 1950s and designed the boat to be a sanctuary if there was a nuclear war.

Also, the boat helped evacuate refugees from Yemen during the civil war of 1986. The tours include visits to the Queen’s bedroom, state apartments and deck tours.

The Water of Leith Walk

You’ll find Leith in the north of Edinburgh – during Edinburgh’s shipping era, it was a central port town. However, it has gone through a significant overhaul since the 1980s, and it is now home to a buzzing shopping and dining scene.

A popular option is to complete the Leith Walk or walk past the canal towards the waterside, where you’ll see an eclectic range of cafes, bars and restaurants.

Edinburgh is a medieval city, and it is famous for ghost tours. I recommend this ghost tour because it is the most comprehensive, but there are many other tours if you’re with children.

Visitors love the various tales of hanging, murder, and cannibalism, and it is a great way to finish your Two days in Edinburgh

When in the best time to visit Edinburgh?

The best time to visit Edinburgh is between April to June, because the weather is considerably warmer and crowds are fewer than during the summer holidays. Also, visiting in the winter is an excellent time, because you’ll see the famous Christmas markets.

How to get from the airport to the city center

Taxi: Taxis are a superb option, but they do not run at a flat-rate fee. The cost varies depending on the distance, but the price is usually around 25 GBP.

Bus: The bus that runs from Edinburgh airport is fast and cost-effective. You can catch the Airlink 100 directly from the airport, and it costs around 4 GBP for one-way.

Tram: The tram is another excellent option, and you can catch the tram from the airport to Haymarket Train Station for 6 GBP (and free for under five-year-olds).

How to get around the city

Tram: The tram has various stops throughout the city. These include Princes Street, Haymarket Train Station, and other locations before the airport. It is a cost-effective and fast way to get around.

Taxi: A taxi is an excellent option because it offers the quickest and most efficient way to get around the city on a 2 day Edinburgh itinerary. You can wave down black cabs all around the city.

Bus: The Edinburgh Bus network is extensive and a fantastic way to get around. You can purchase tickets when you board, but the buses do not offer change. Also, night buses are running 24/7.

Bikes: Edinburgh is a beautiful cycling city with 75km of off-street paths for cycling and walking. Some of the routes are on the National Cycle Network, and it is a great way to get from attraction to attraction.