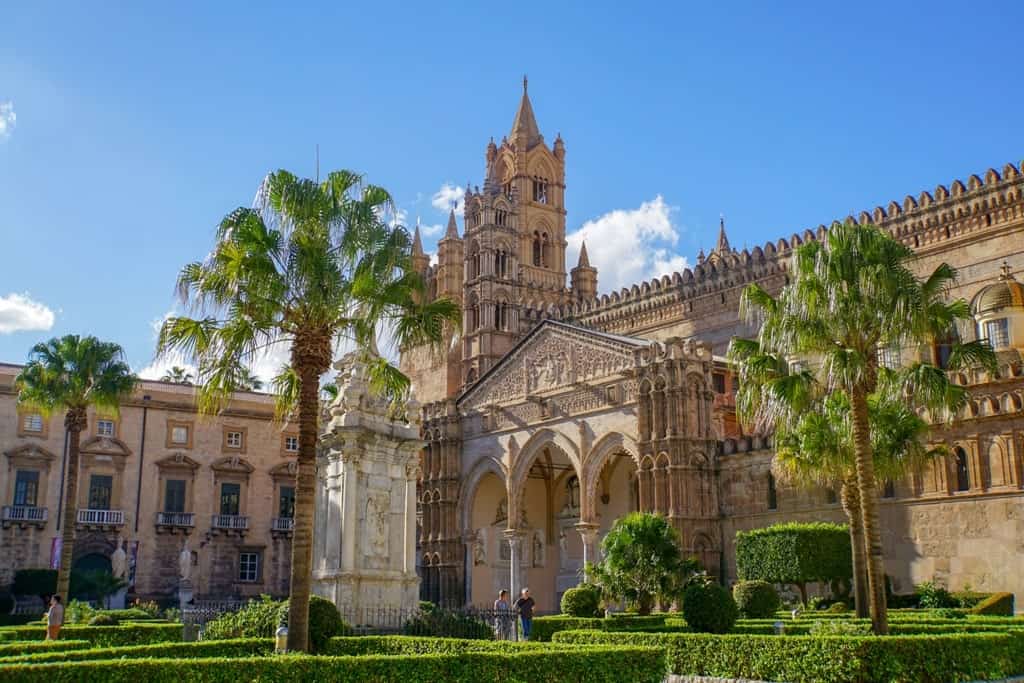 Palermo is everything you dream it’s going to be – splashy, delicious urban chaos, Mediterranean style. It’s a wonderful combination of old-world elegance and cobblestoned charm. In Palermo, you’ll enjoy mornings at the noisy fish market, romantic dinners at trattorie, afternoons of serenity taking in the many refined cultural destinations, and late nights sampling daring street food.

Palermo has a big, bold history. The crossroads of North Africa and Europe, the Arab World and Christianity, the east and the west, this beautiful city has an amazing texture. Civilizations mingled and flourished here, and the result is centuries’ worth of architectural wonders and fascinating cuisine.

This is a compact city. While it will give just a tantalizing taste of Palermo, we can nonetheless get a great overview in two days. We can see many of the principal landmarks, visit the markets, and even hit the beach, fueling up with espresso and gelato and between.

This is a guest post by Amber Charmei from Provocolate.

Two Days in Palermo: Where to Stay

There are so many choices for stylish accommodations in Palermo. Let’s start with a splurge. Palermo is a theatrical city, and very central.

Set at an elegant intersection in the historic center, the hotel Politeama features chic, minimalist contemporary decor. Click here for more information and to check the latest prices.

How to Spend Two Days in Palermo, a Perfect Itinerary

2 Days in Palermo: Day One

Espresso and Cannoli at Spinnato

Even if you have a lovely breakfast at your hotel, you’ll want to start your day Sicilian-Style with an espresso or a caffe latte at Antico Caffe Spinnato, in business since 1860. To order like an Italian, you go first to the cashier and say what you want, then give your slip to the gentlemen behind the counter. There’s also table service (for a premium price), but it’s more fun to stand at the counter. Besides, we have a big day ahead.

Take your pick – these three traditional outdoor markets of Palermo are all thick with atmosphere and charm. Check out the fish, the gorgeous eggplants, heaps of fragrant seasonal fruits, and the stunning array of cheeses, and just take in the sunny Mediterranean vibe.

Just one of the sensational architectural treasures we will be visiting today, the Palermo Cathedral is magnificent. Originally built in the 12th century, but with additions made throughout the 18th century, the Cathedral unites many architectural styles with grace.

Your gaze may be to the ceilings but look down, for there’s a special treat – the Meridiana. A line along the floor with intricate marble inlays represents the signs of the zodiac, with the summer solstice at one and the winter solstice at another. A hoe in the ceiling lets a beam of light trace the sun’s path along the line throughout the year.

This famous intersection of the Via Maqueda and the Corso Vittorio Emanuele features four Baroque facades. They’re fanciful and lovely, and their number – four – is cleverly taken advantage of. Through statues and fountains, they each represent one of the four seasons, one of the four Kings of Sicily, and one of the four protectresses – Saints Agata, Christina, Olivia, and Ninfa. Although commonly called the Quattro Canti (four corners), its official name is actually the Piazza Vigliena.

From the Quattro Canti we’re just a short distance from the Fontana Pretoria – or, as some called it in centuries past, the Piazza della Vergogna – “Piazza of Shame” – on account of the nudity. But what can we expect? After all, it represents the 12 Gods of Olympus, along with the fauna and rivers of the Palermo region. It was built in 1554, but not here – actually, the city of Palermo bought it from a nobleman in Florence and transported it to this spot in 1574.

Saint Mary of the Admiral is a classic example of the Arab-Norman architecture for which Palermo is so famous. Byzantine-style mosaics of gold unite here with wonderful Arab-style craftsmanship in this 12th-century church.

They are then joined by 18th-century frescoes, for a spectacular, and even overwhelming, architectural experience.

Directly across from the Martoranna, this is a completely different type of Arab Norman church. The small high domes of this Christian church have distinctive proportions deriving from Muslim architecture. The elaborate inlaid floors with their geometric motifs are the work of Arab craftsmen, and wonderful with the dramatic spaces above, shaped from a raw stone.

Evening – an Enoteca, and Maybe Even an Opera

Enoteca is Italian for wine bar, and an enoteca in Palermo is a great place to sample local wines and the cheeses and charcuterie plus small splash that go best with them. Convivial and charming, it is as much a cultural experience as a meal. Try perhaps the Enoteca Picone – one of the choices of the magazine Wine Enthusiast. Or as the locals for their favorite little spot.

This was the third-largest opera house in all Europe when it was built (1897) – only the opera houses of Paris and Vienna surpassed in size. This splendid theatre, designed in the Renaissance style, has seven horseshoe tiers rising above its stage. Cinephiles of course are more familiar with its grand staircase on the exterior, scene of the climax of the third Godfather film. If we’re lucky, something will be on during your stay.

Busy as we were yesterday, it pays to wake up early for our second day in Palermo. We’ll be starting at the beach, and it gets crowded.

The beach in a town with so much to see? Well, yes. And not just for the pleasures of the waters of the Tyrrhenian sea. Mondello offers a glimpse of an elegant beach day in the past. This chic beach resort just north of the city center has wonderful Stile Liberty architecture – holiday villas as well as the grand beach pavilion.

We can crowd into the free area of the beach, but for the old-style classic experience, we can glam up a little and splurge for a lido – an organized mini beach club with loungers. A swim at Mondello Beach, with the silken white sands and bright turquoise water, is a completely different way to experience Palermo, and a very authentic one – locals love their beach.

Ice Cream after the beach is the perfect fit. But in Sicily, they eat their Gelato in a wonderful way –  you can get it on a brioche bun. The sweet, soft bread soaks up the meeting gelato, while also making it look like a sandwich. It’s very satisfying on a warm day.

The chic Brioscia – known for creative constructions – is a perfect place to try one. It’s near the Teatro Massimo. But any neighborhood gelateria can fix you up. Don’t skip the whipped cream – we’ve come this far already. We can get a slice of pizza later to balance it out.

The Palatine Chapel and the Norman Palace

Another fantastic Arab-Norman site, the Norman Palace and its famous chapel deserve to not be rushed.

This magnificent palace is straight out of a fairy tale. It has the most spectacular union of architectural styles. This was the palace of the Norman kings of Sicily. Starting with Roger II of Sicily in 1130, the Normans ruled Sicily until 1816. Before the conquest, Sicily was in the hands of the Arab Muslims.

In the resulting Arab-Norman civilization, the Norman, Latin, Arab, and Byzantines enjoyed a rich cultural exchange, reflected in the Palace and the Palatine Chapel.

We’ll enjoy the royal apartments with their magnificent frescoes and furnishings, the multi-storied interior courtyard surrounded by loggia, then save the Palatine Chapel for last. The work of Byzantine and Arab craftsmen, the Palatine chapel is an amazingly successful union of styles and artistic traditions.

The finest in Byzantine gold mosaics, marble columns with Corinthian capitals, inlaid marble floors with geometric Arabic motifs all unite under an elaborate gold ceiling of complex Arab carpentry in the manner of a muqarnas. Outstanding. We’ll need time to take it all in fully.

Afterwards, we can enjoy a stroll in the gardens in front of the palace.

Evening – Street Food for Dinner, or a Trattoria

Palermo is famous for its street food. It would be a shame if we didn’t at least sample some of the unique specialties during our stay. There is Pani ca Meusa – a sandwich of hot slices of saucy spleen on a fluffy roll. Not adventurous enough? Then we can have stigghiola – grilled intestine.

But honestly, we might need something more approachable, so we’ll have these an hors d’oeuvre. Then we can hit one of the better restaurants for some fine local specialties. Carizzi d’Amuri, in Kalsa, is an atmospheric choice with its arched ceilings. The menu features excellent seafood specialties.

Practical Information for a 2-Day Itinerary in Palermo

The major Arab-Norman churches have a small admission fee. There are two ticket prices. One for a single visit to that church, and one is for a greatly reduced admission to all the churches that are listed on the back. This is a much better value.

It’s always wise to be on the lookout for pickpockets, but here perhaps even more so, especially in the markets and the main tourist areas.

You’ll notice the city is quite chic – if you’d like to look like a local, dress smartly but comfortably.

The city is very walkable, with many of the main attractions within an easy distance from one another.

When is the Best Time to Visit Palermo

The height of the summer season will bring both heat and many crowds. But it’s still fabulous. The winters in Palermo are mild, the fall warm, and the Mediterranean spring every fragrant and sweet. There is no bad time to visit Palermo. But of course, the off season will bring bargains with it.

Getting to the City Center from the Airport

There are several convenient choices for getting from PMO (Falcone Borsellino Airport). PMO is connected to the city by rail – a station is directly under the airport and the trip to Palermo centrale takes a little under an hour. The price is just under 6 eu. Alternatively, there are bis services for an equivalent price. These leave every half an hour throughout the day from the early morning through just after midnight.

If you want to take a taxi, make sure it’s an official licensed taxi, and ensure the driver uses the meter. Welcome Transfers is a very convenient choice.

Bio: Amber Charmei, originally from Manhattan, moved to Greece a couple of decades ago to experience the same chaotic urban intimacy, but with a longer backstory and better swimming. She writes on travel, art, culture, and cuisine – in print magazines and on the web – and at Provocolate and Thessaloniki Local, where she shares everything she loves about living a contemporary life in an ancient place.