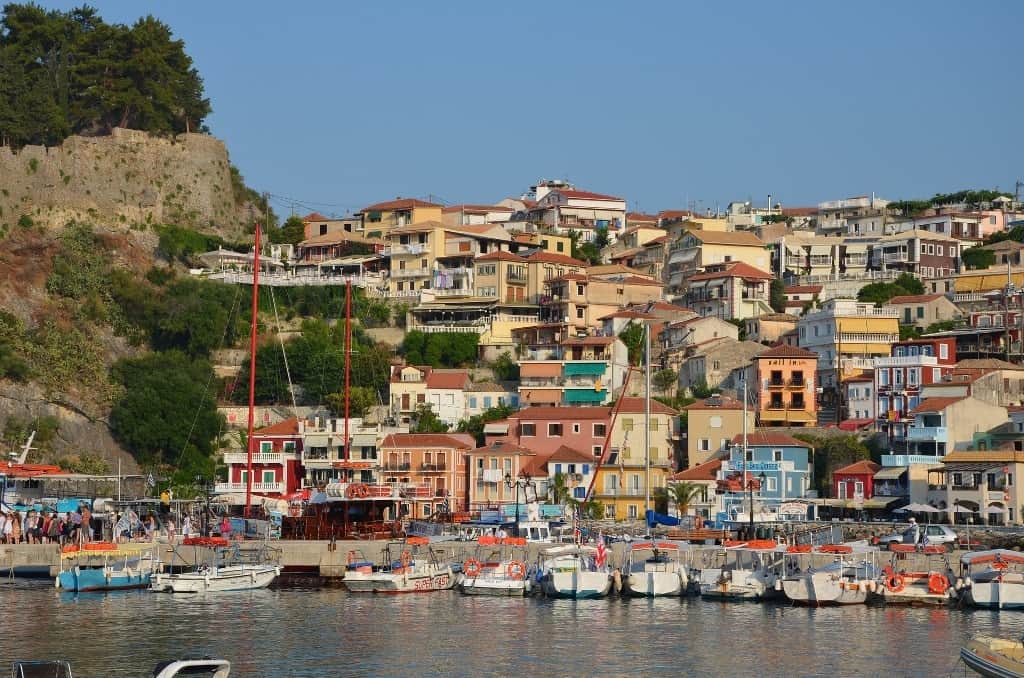 There’s no denying it: Greece is one incredible place.

Sun-kissed and exotic, beach-lined and steeped in culture; historical, proud, diverse and full of passion and fine food…it has a magnetism that’s hard to resist.

The cradle of Western Civilisation, Greece is home to some of the greatest attractions in Europe, and people flock to see them every year.

But while the majority of travelers head straight to its picture-perfect islands and white sand beaches (perhaps after the obligatory few days in Athens), the Northern part of the country is often overlooked.

Northern Greece is as diverse and spectacular as the rest of the country and simply should not to be missed! So, to convince anyone without this magical place already on their agenda to go, here are seven of the top things to do there!

Things to Do in Northern Greece

1.Walk around the beautiful coastal town of Parga

Situated on the North Western Coast of Greece is the charming, picturesque town of Parga.

Honestly, this place was made for postcards- it is absolutely beautiful and is truly picture perfect. Colorful houses rise up the hillside, overlooking the stunning white sand beaches and harbor front.

Walk down the cobbled streets of the old town; meander idly around the cafes, shops, and bars that cater for the mass of tourists that visit here each year.

Make sure you walk around the ruins of the ancient Parga Castle on the hillside too and look out from on high at the marvelous township below.

The incredible Vikos Gorge is in the Pindus Mountains of Northern Greece, set deep within the Vikos–Aoös National Park. It is 20km long and in places 490 meters deep and 400 meters wide.

The gorge is staggering to behold, breathtaking to experience and utterly mind-blowing to explore. If you’re heading to Greece, visit the Gorge!

The tiny village of Vikos is a great starting point for exploring this magical place. There are heaps of hiking opportunities all around, viewing points aplenty and lots of gorgeous little mountain top villages for accommodation.

3. Get out on Lake Pamvotida in historical Ioannina

Next up is the buzzing city of Ioannina (Yannena), situated on the banks of the beautiful Lake Pamvotida. The atmosphere is vibrant and lively, and there’s a lot to do here, so consider spending a good few days sampling all that Ioannina has to offer.

Explore the castle town (the oldest Byzantine fortress in Greece), which is inhabited to this day, to learn all about the remarkable history of the city.

And make the most of the Lake too! It is possible to simply walk around it, but I recommend taking a boat out to the island at its center as well. This cool little island is home to multiple ancient temples, which you can go inside to see remarkable religious paintings that adorn the walls.

Check out: A guide to Ioannina, Greece.

4. Explore the magical monasteries of Meteora

Meteora is a unique, special place where ancient monasteries sit precipitously atop vast rock pillars. High above the town of Kalambaka, you can explore centuries-old buildings of immense spiritual significance, hundreds of meters up in the air.

If you fancy a hike, it is possible to go by foot up the mountainside to each monastery. Otherwise, there are numerous tour companies that can take you where you wish to go, or you can hop on a public bus from Kalambaka too.

Each monastery requires a €3 per person donation upon entry, and all six monasteries are majestic. The atmosphere is awe-inspiring, peaceful and sublime; the perfect place to pause, reflect and be present.

A visit to this remarkable part of the World should be a must for anyone visiting Greece.

Check out my guide to Meteora Monasteries.

At 2,918 meters, the highest mountain in Greece has long been a mythical place, where the Gods of Ancient Greece were said to reside.

These days though, people visit for a legendary experience of their own: partaking in mountaineering and other outdoor pursuits in a location renowned for its fantastic and diverse fauna and flora, surrounded by breathtaking natural beauty.

Litochoro, known as the City of the Gods, is about 100km away from Thessaloniki and the gateway that most people use to explore the mountain.

6. Soak up the City Life of Thessaloniki

This hugely popular ancient city is the second largest in Greece and is thousands of years old. Its history is incredibly rich, with heavy influences found throughout from its Roman, Byzantine and then Ottoman past.

Due to its geographical location, Thessaloniki has been a site of immense importance in Greece for millennia. Hailed as a cosmopolitan hub of art, culture, architecture and gastronomic experiences, it remains an important city in the country and draws tourists in droves to each year.

There’s a wealth of things to do in Thessaloniki, so take some time to really experience the city.

Walk along the seafront, visit the Byzantine castles, explore the museums and seek out the dozens of amazing architectural hotspots around, such as the White Tower.

Check out, the best things to do in Thessaloniki.

7. Visit the Paradise that is the Halkidiki Peninsula

Last but by no means least, is the paradise that is Halkidiki Peninsula. This stunning place is recognizable by its ‘three fingers,’ which extend from the mainland out into the Aegean Sea.

The peninsular is characterized by lush forest that opens up onto pristine sandy beaches and clear blue waters. It is a haven for travelers and tourists. Halkidiki is a popular destination for locals too.

Though all are renowned for their wonderful beaches, each ‘finger’ has its own vibe, with Kassandra known as the most built up of the three; head there for resorts and thriving night life. Sithonia, by contrast, is said to be far quieter and less crowded. Finally, Athos has been untouched by modern development and is more popular among locals.

Athos is also famous for its monastic community on Mount Athos, known for its strict rules (based upon their religious beliefs) around living and visiting there.

Whichever finger you find yourself on, you’ll be sure to enjoy your time on the Halkidiki Peninsula.

Check out: The best things to do in Halkidiki.

8. Explore Pella the birthplace of Alexander the Great

in the 4th century BC, Ancient Pella was a major city, built on fertile land, that was the capital of the kingdom of Macedonia. The town lay at the mouth of the Axios River with direct access to the sea, but today lies 25 kilometres inland because the river became silted. Its past grandeur can be traced in the town’s archaeological museum which is known for its beautiful pebble mosaics.

It was in the city’s sizeable palace that Alexander the Great was born and it is where Euripides lived and worked, writing his plays Archelaus and Bacchae. Excavation work continues today to uncover more of the city’s mighty Royal Palace which covered 56,000km² and is where the young Alexander grew up.

Check out my guide to Pella Greece.

Zagahoria in north-west Greece is perfect for hiking and immersing yourself in nature – and also for village-hopping! There are 46 stone villages scattered across the slopes of the Pindus Mountains and in most of them, time seems to have stopped in the 19th century. Amongst the fascinating villages to visit are Megalo (large) Papigo and Mikro (small) Papigo that are twin villages with beautiful architecture, lakes and excellent walking routes. Kipi is another village well worth exploring as it is one of the oldest in the area and sits astride two rivers, making it perfect for rafting, canyoning and mountaineering in magnificent countryside.

Check out: The best things to do in Zagorohoria.

The Prespes Lakes are two fascinating lakes to visit. Megali Prespa (large)  sits mainly in Albania and Mikri Prepa (small) lies partially in Macedonia and partially in Albania. The area is rich in flora and fauna. On Mikri Prespa there is the island of Agios Achillos with its a one street village, goats and dwarf cattle that roam freely. On Megali Prespa, there is the pretty fishing village of Psarades, where you can take a boat trip to explore the rock frescoes and several abandoned hermitages.

11. Check out the Picturesque City of Kavala

Built like an amphitheatre on the slopes of Mt Symvolo overlooking the bay, Kavala has the nickname ‘the Monaco of Greece’ and is one of the most attractive cities in Greece. Kavala has beautiful architecture, numerous places of interest and the UNESCO archaeological treasure of Philippi close by. In the summer months, it is the perfect holiday destination with great beaches and numerous water sports to enjoy.

Check out my guide to Kavala, Greece.

12. Explore the lakeside town of Kastoria

Situated on a promontory on the western shore of Lake Orestiada and surrounded by mountains, Kastoria is regarded as one of the prettiest cities in Greece. The city is a collection of old neighbourhoods, stately mansion and more than 70 Byzantine churches. Kastoria became wealthy because of the fur trade in beavers.

Although the beavers had long since disappeared, the city’s fur and textile trade has continued along with its fame for beautiful embroidery. The lake is at its best in the Spring and Autumn and overlooked by many tavernas. For those who are feeling energetic, it is fun to follow the nine-kilometre walk around the promontory.

And that brings to an end my list of the top things to do in Northern Greece. The North of the country is a truly incredible place to visit, and this is by no means an exhaustive list of all there is to do there.

Head to Greece, venture up North, and you’re bound to have an amazing time!