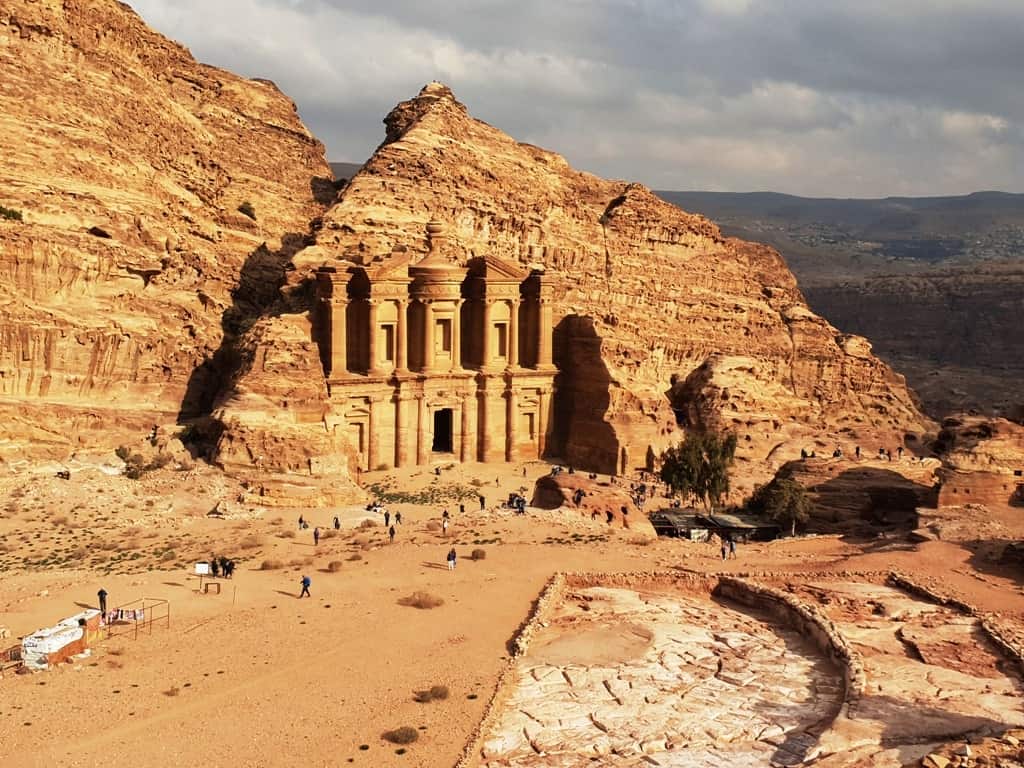 Situated next to the eastern side of the Jordan River lies the culturally rich Kingdom of Jordan. The country has long been considered an important Holy site for both Christians and Muslims due to the many historical structures situated inside it. Besides its historic and archeological sites, Jordan is also filled with stunning natural wonders that can be found nowhere else in the world. Below are some of the best historical places one should visit while in Jordan.

Marveled by generations throughout time, Petra, also known as the “Red Rose City” is a stunning area known for its numerous archeological sites, many of which are carved into stone. Believed to have been built around the 5th-century A.D., Petra was constructed when it was becoming one of the most important centers of Christianity during the Byzantine era.

As you wander through Petra, you will come across many unique structures, like the Treasury. The Treasury is carved into the side of a mountain and is considered to be one of the most incredible archeological wonders in the world. The red sandstone structure is carved into a heavy rock but displays stunning architectural details.  Besides this site, Petra also is home to colonnaded streets, temples, and baths you can explore. While here you can also head over to the Beidha Neolithic site which is home to Neolithic living spaces constructed by scientists to help them better understand how people during this time once lived.

Siq is another great place to visit while in Petra. It is the main entrance to the city and is situated in a narrow section between two gorges.

Check out how to spend 7 days in Jordan. 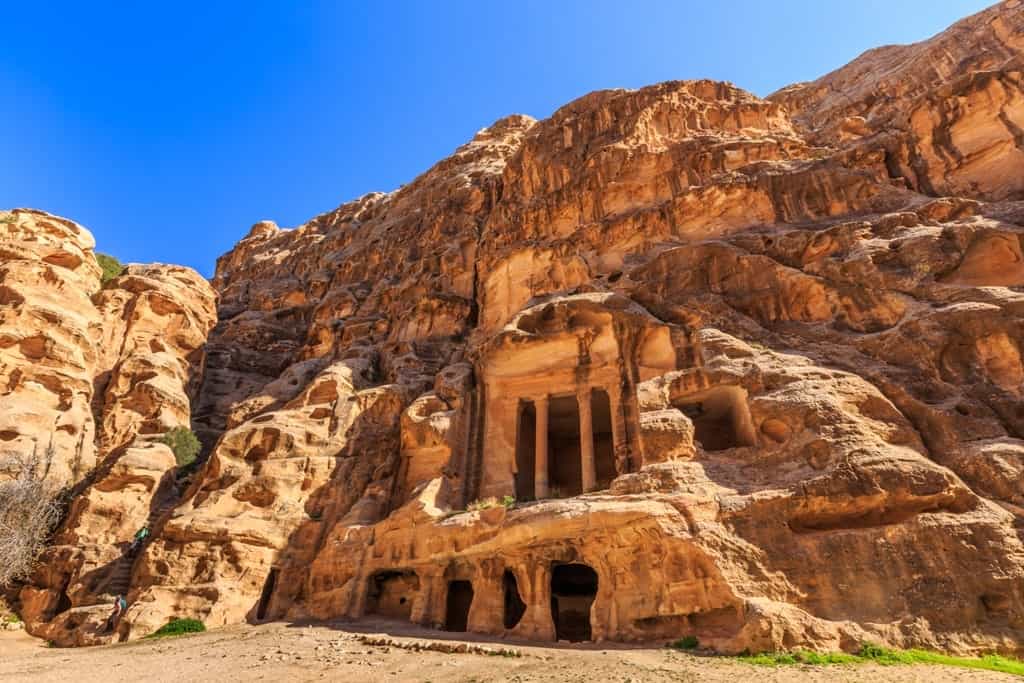 Little Petra (known locally as Siq al-Barid) lies just a few miles north of Petra. This area is believed to have once been an important agricultural site in the country and small tokens of this history can be found throughout it, like camel posts. The site is similar in many ways to Petra which is how it got its name. Here, you’ll find a few archeological structures carved into sandstone canyons.

When here, you’ll definitely want to check out the Painted House. Discovered in the 1980s, the archeological site was only recently opened to the public. The house is believed to be dedicated to Dionysus, the Greek god of wine. You can view the intricate artwork uncovered which includes colorful patterns and unique depictions of birds.

Little Petra is packed with ancient frescos as well. You can visit many of its historic sites and come across one. In addition to this, you can visit the local cave which has unique frescos of grapes painted in it which help to show how Little Petra was once an important wine growing region as well.

While it doesn’t have as many sites like Petra, Little Petra is just as impressive and is much less crowded compared to Petra.

Travel to Amman and See the Roman Theatre and the Citadel

Amman, the capital of Jordan, is packed with plenty of things to do and see. The city is filled with numerous archeological sites you can wander through. One of the most popular places to visit in Amman is the Roman Theatre. This structure was built during the 2nd-century and is known for its impressive wall guarding its interior. The theatre is a massive site and can sit over 6,000 people. It also features three different levels which indicated where people of certain statuses sat. You might also see where a shrine to Athena was once placed before being moved to the local Jordan Museum. Tours are available of the theatre, although keep in mind you need to buy tickets in advance due to its popularity.

The Citadel is also a great spot to stop by while here. Situated on a hill overlooking the city, the Citadel once served as an agora and includes many ancient remains of its once magnificent structure. While here, you can explore the Temple of Hercules and the iconic Umayyad Palace. The Temple of Hercules is believed to be one of the oldest structures in the Citadel and is known for its gigantic stone hand which is thought to be a remnant of a former statue of Hercules.

The Umayyad Palace is situated nearby. Built in the 8th-century, the palace once housed politicians and other prominent people before falling into ruin. Today, you can walk through this structure and view the once vibrant artwork, massive columns, and unique plants scattered around its exterior.

Only a 48km outside of Amman, Jerash is one of the best daytrips you can take from Amman. The minute you arrive there, you will feel like you’ve arrived at just another provincial town with bustling streets and normal day-to-day activities.

But once you cross the streets into in the winding market gardens and walk towards the ancient city – you will realize the illustrious past that this city boats.

Jerash is mostly famous for its Roman influences, its imposing Hadrian’s Arch, and the general gist of grandeur that emanates throughout the entire city.

A place that is famous for its Roman ruins, archeological sites and relatively preserved attractions – Jerash is one of Jordan’s top attractions.

A city of wealth, of importance, and most importantly – a place that mixes Mediterranean Roman influences with the Arabian orientalism of Jordan.

So it’s no surprise that your trip to Jordan would not be complete without visiting Jerash.

By visiting Jerash, get ready to visit a place where the charming influences of human touches mix beautifully with the ancient walls of Jerash. The backdrop of farmland and rolling hills, the preserved ruins, the pristine columns, plazas and temples – you’ll find yourself wondering whether you’re still in Jordan or in Rome.

Take a Tour of Ajloun Castle

This Islamic castle was built in the 12th-century and has seen many historical events happen within its walls. One was when it was taken over by the Mongols during 1260 before being later retaken. You can tour this structure and see former defense stations, gates, and vaulted ceilings. You can also explore its tower which is partially rebuilt to help restore the grandeur of this once important castle.

Walk to the Seven Sleepers Cave

An important site for Christians, the Seven Sleepers Cave is believed to be the spot of a famous legend which tells of a group of young people (also referred to as the Seven Youths of Ephesus) who ran from religious persecution after being stripped of their military honors. After running away, they hid inside the cave which the Emperor soon covered with stones so they couldn’t escape. However, 300 years later, they miraculously reemerged from the cave after the stones were removed.

See the Mosaics in Madaba

An essential part of the Holy Land, Madaba is considered to hold some of the most precious archeological treasures in the world. Madaba is well-known for being home to one of the oldest Holy Land maps which is constructed as a mosaic on the floor of a local church. This mosaic is located in the Orthodox St. George Cathedral and was discovered in the late 1800s.

This mosaic isn’t the only one in the area though. In fact, Madaba stores numerous mosaics within its borders earning it the name of “the City of Mosaics.” Another popular collection of mosaics resides in the Church of the Apostles. One of the most famed mosaics in this structure is one that shows the twelve apostles and features birds, plants, and flowers bordering its edges.

Climb to the Top of Mount Nebo

Mount Nebo, which overlooks the country at 2,329 feet, is believed to be the spot where Moses climbed up to get a view of the Promised Land. You can trek up the mountain to view many historical and iconic Holy Land sites, like the Dead Sea, Jerusalem, Jericho, Bethlehem, and the Jordan River.

Nearby the mountain is the Mount Nebo Church which contains various Byzantine mosaics that depict wine-making and animals. You can also view the six ancient tombs discovered during an excavation of the site.

Explore Bethany Beyond the Jordan

This UNESCO site is situated just a few miles above the Dead Sea and is believed to be the spot where Jesus was baptized by John the Baptist. Besides seeing the water where this baptism occurred, the site also contains ancient church remains, a monastery, and even caves where hermits once lived.

Tell Mar Elias is thought to be where the Biblical prophet Elijah was born. You can tour the area by foot and see the remains of a ruined church known for the massive tree that grows in the middle of it. The church still has many colorful mosaics left inside which you can view yourself.

If you’re up for an adventure, you can get to Tell Mar Elias via the Prophets Trail. This trail is designed to recreate the extensive route that many religious figures once took to get through the country. The trail is connected to the Ajloun Forest Reserve which is a stunning area in Jordan known for its pistachio, oak, and strawberry trees. You might even see the rare Roe deer trot by which was once on the brink of extinction.

Take a Trip to the Desert Castles

Situated in the middle of the desert are these remarkable desert castles. Each castle is located within a few minutes of the other making it the perfect day trip. You can tour each of the castles which all have their own unique personality. One popular castle is the Qasr al-Kharrana. This castle remains a mystery as to its purpose, but it’s believed to have once been an inn. The upstairs of this castle is quite impressive thanks to the columns and frescos adorning it. Once you’re done exploring the castle, you can stop by a nearby Bedouin tent where you can buy a cup of tea or other souvenirs.

Another castle to definitely visit on your journey here is the Qasr Hammam as-Sarkh, also known as Sarah’s Hammam. This is one of the largest of the desert castles and served as a bathhouse.

Keep in mind that the desert castles rest within the King’s Highway. This highway is one of the busiest in the kingdom as it connects many of the surrounding countries together. Because of this, you’ll want to be careful when traveling and exploring near it.

This town is situated in the northern section of Jordan and is known mainly for being home to the ruins of ancient Gadara. It also contains an Ottoman village which you can tour to learn more about its history. It’s also believed to be the setting of the famous Biblical parable of where Jesus cast out the demons in two men into pigs.

Umm Qais also offers stunning views of the surrounding countries. Because of its high elevation, you can easily get views of Syria, Israel, and Palestine from it as well as the Sea of Galilee and Mount Hermon.

The Jordan Pass should be one of the first things you purchase before traveling to Jordan. The discount program makes it easier and cheaper for you to discover everything that the country has to offer.

It allows entry into 36 different tourist sites across all of Jordan and comes in three different prices levels:

Jordan is an incredible country rich in culture and history. No matter where you visit, you’ll find plenty of unique historical structures you can tour and learn more about. If you’re looking for some stunning historical sites to visit in the world, the Kingdom of Jordan is a destination you’ll certainly want to consider.