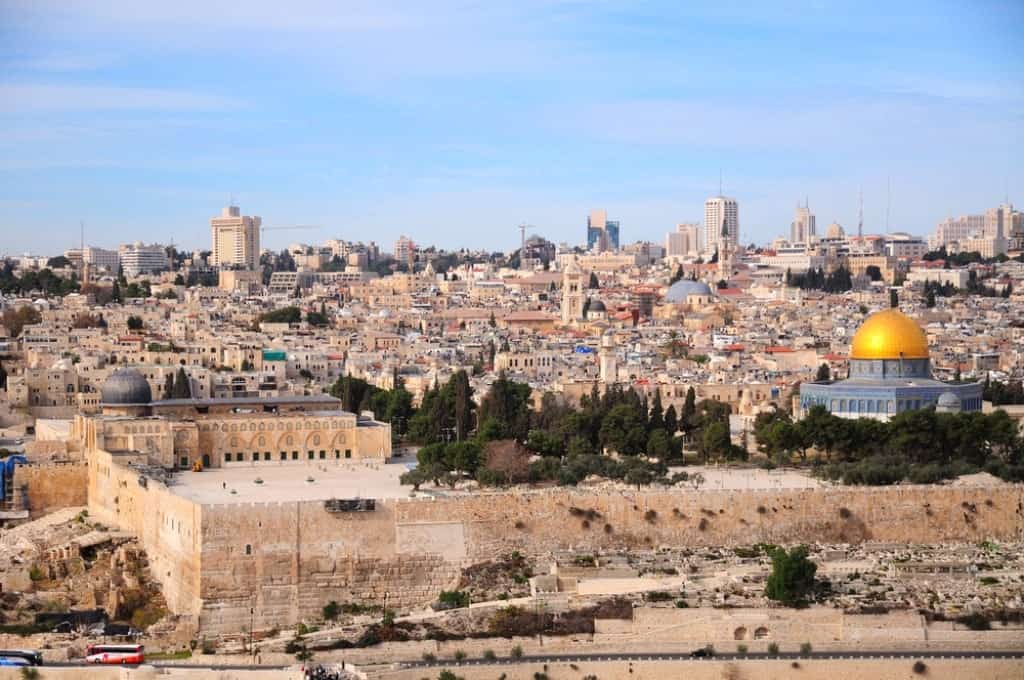 Jerusalem is an extraordinary city. The variety of attractions can keep a tourist with any type of interest busy for a week. Historical sites from 3000 years ago, religious sites, museums, markets, street food, and nightlife blend in a unique way. To give a feeling of the cities many faces, we dedicated the first day of the itinerary is to the old city and its surroundings and the second day to the new city.

This is a guest post by Erez Speiser of www.hike-israel.com

Two Days in Jerusalem: Where To Stay?

Most tourists will stay in the city center, which is a triangle created by three main streets. Jafa, Ben Yehuda and King Gorge. Many of the city’s attractions, including the old city, are within walking distance of the area, and other attractions are served well with public transportation. Hundreds of accommodations are scattered in this small area ranging from fancy high-level hotels to chip hostels with everything in-between. The below recommendations are all ideally located stand out in their price range.

Low-end: Abraham Hostel – This top-rated hostel is world-famous for its unique “young” and international atmosphere, with a very inviting bar and public areas. Most of the rooms are shared dormitories, but they also offer private economy rooms. Click here for more information and to check the latest prices.

Mid-range: Ibis Jerusalem – Opened recently, this modern facility is a good option for staying in well reputable hotel chain without getting bankrupt. Click here for more information and to check the latest prices.

High-end: If budget is not an issue, you cannot go wrong with the Waldorf Astoria. The flagship brand of the Hilton chain will make sure that every tiny detail of your stay is taken care of. Click here for more information and to check the latest prices.

How To Spend 2 Days In Jerusalem, A Perfect Itinerary

2 Days in Jerusalem – Day One: The old city and around it.

The old city of Jerusalem is roughly a square of one Kilometer by one Kilometer surrounded by the city walls. It is hard to imagine it today, but Until around 1850, this tiny area was the entire city of Jerusalem. Only in the 2nd half of the 19th-century residents started to move gradually outside the city walls. The old city is divided into four quarters: the Armenian Quarter, the Muslim Quarter, the Christian Quarter, and the Jewish Quarter.

Walking tour in the old city

The best way to appreciate the old city is on foot. There are dozens of historical buildings, churches, markets, yards, and shops that reveal the many facets of Jerusalem. Some are very famous, like the church of the holy sepulture and the wailing wall. Others are less famous but not less exciting. Rambling in the picturesque narrow alleys and exploring unexpected gems is an endless delight.

Rising East of the old city and the temple mount, the Mount of Olives provides the best view of the old city. The panorama from the lookout balcony on the summit is not to be missed. However, the slope of the mountain contains many unique “must-visit” sites such as the Gethsemane Garden & Church, Jewish Cemetery, Tomb of Absalom, and the Church of Mary Magdalene.

Tip: If you feel energetic, take a taxi to the summit of the Mount of Olives and return on foot to the old city.

The entrance to the “City of David” is near the Dung Gate, just outside the city walls. It is an archeological site that reveals to the visitor ancient Jerusalem dating to 1000 BC. Besides the stone structures, a major attraction is a long underground walk in the ancient water system of Jerusalem, known as the “Shiloach Tunnel”.

Another exciting way the apricate the site of the old city, is to encircle it on the top of the city walls. The Ramparts Walk, one of the most rewarding activities in terms of history, beauty, and a greater sense of the Old City as a whole. The walk starts at the Jaffa Gate on the western wall and goes in two directions. Southbound to Lion’s Gate or eastbound to the Dung Gate.

The new city of Jerusalem is a large metropolitan area with a population of around one million, covering 125 square kilometers. (Out of this, the old city covers only one square Kilometer!). The first houses outside the old city were built in the 2nd half of the 19th century and gradually grew to what the city is today. There are many different neighborhoods and sites worth visiting. Here are the top ones if you have just one day.

Shrine of the Book

In 1946, a Bedouin teenager accidentally found seven ancient scrolls housed in jars in a cave in the Judean Desert. He had no idea that this was the beginning of such a significant discovery. This discovery was the beginning of a long archaeological journey that eventually revealed a total of 20 complete scrolls and 16,000 fragments of scrolls.

Out of these fragments, Researchers have assembled a total of 981 manuscripts. Most of them are books of the Torah (Old Testament) written in Hebrew by our ancestors. The scrolls are on display in a unique underground structure called the “Shrine of the book” which is a part of the Israel Museum.

One of the joys of touring Israel is its delicious food. There is no better place to experience it than Machane Yehuda Market in Jerusalem. The market is popular with locals and tourists alike. Most stalls sell fresh fruits and vegetables, baked goods, fish, meat, nuts, seeds, and spices.

Many stalls offer traditional Israeli street food such as Hummus, Falafel, Shawarma, Burekas, and Shakshuka. The atmosphere is spiced up by the sellers who call out their prices and special offers to the crowds. On Thursday nights, the market is turned into a nightlife hub, when many stalls are converted into small bars, and live music is played.

The story of Israel cannot be fully understood without understating the Holocaust of the Jewish people during World War 2. Established in 1953, Yad Vashem is Israel’s official memorial to the victims of the Holocaust.

It is dedicated to preserving the memory of the dead, honoring Jews who fought against the Nazi regime and non-jews who aided Jewish people during this dark period while risking their own lives. Yad Vashem is the most visited indoor Israeli tourist site, with approximately one million visitors each year. (Admission is free).

One of the most intensely emotional displays in the museum is the “Hall of Names”. A huge cone-shaped hall, recording the names of 4.5 million Holocaust victims with a unique visual surrounding.

When is the best time to visit Jerusalem?

Jerusalem is located in the mountains, 800 meters above sea level, and during wintertime, it is rather cold to wander outdoors. The summer months are very hot and crowded and are also less recommended. The ideal periods are October-November and April-May when the temperatures are pleasant, and the city is less crowded.

Shabbat (Saturday) is the holy day of the Jewish people. It starts at nightfall on Friday evening and ends on Saturday evening (25 hours). During the Shabbat, orthodox Jews don’t drive cars and don’t conduct business (among other traditions). Since Jerusalem is a very religious city, during Shabbat, there is no public transportation, all the shops are closed, and many restaurants and attractions are also closed. Therefore, make sure that your two-day stay in Jerusalem does not overlap Saturday.

Most travelers will reach Jerusalem from Ben Gurion Airport or Tel-Aviv. The fastest and most convenient way is to travel by train (22 NIS). There is also a less attractive bus service and expensive taxi service (About 300 NIS).
Important! Keep in mind that due to the Shabbat, the train service is not working from Friday afternoon until Saturday evening. If you need to travel during this period, you will need to take a taxi.

Public transportation is very cheap and efficient. A weekly pass (Called RavKav) for the whole Jerusalem area sells at 94 NIS, and a daily Pass 21 NIS. You can use the Pass on both the light rail train and the buses.

You can get the Pass for 211 NIS at the Ben Gurion airport or in the city. The Pass is valid for seven days and includes free public transportation, free entrance to 3 attractions, and a 25% discount on all the others.

Bio: Erez Speiser, born in 1966 in Israel and lives in the Galilee region. By education, a mechanical engineer, working as a product manager in a multinational metal cutting tools company. However, Erez’s big passion the heritage, nature, and outdoors of Israel. He enjoys hiking, mountain biking & surfing.
Erez loves Israel and tries to promote hiking tourism in the country. He is the founder & manager of www.hike-israel.com