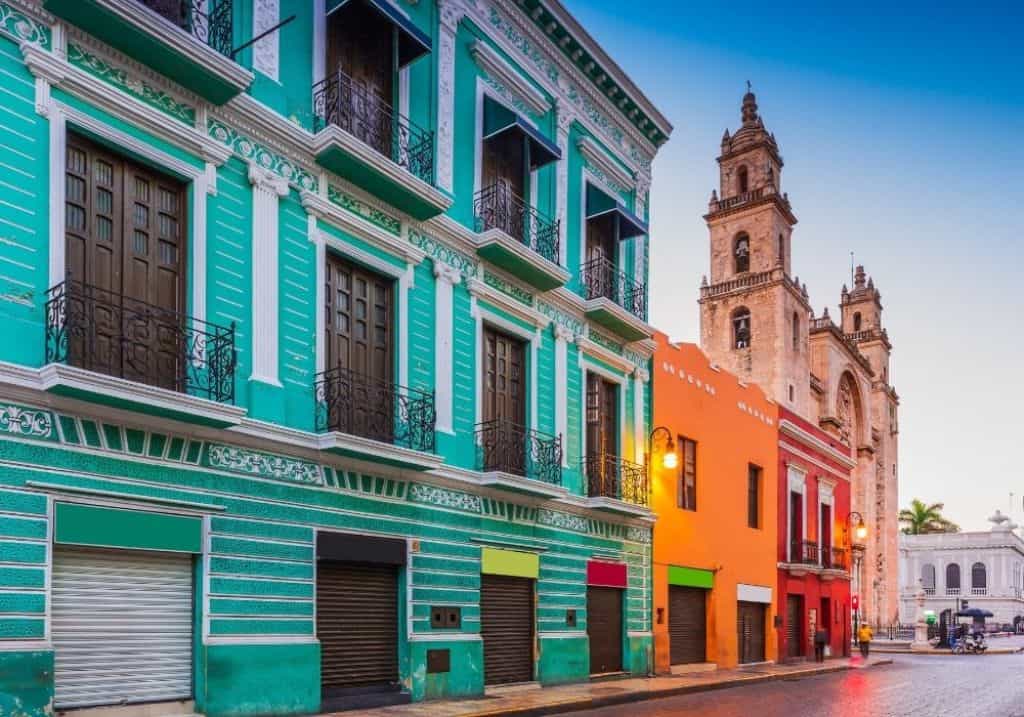 Looking for the best way to spend two days in Merida, Mexico?

There’s no end to the number of amazing things to do in Merida, the capital of Yucatan state in the Yucatan Peninsula! With just two travel days, however, the key will be figuring out exactly what you want to do so you don’t waste a single second.

Known as the Cultural Capital of the Yucatan, many travelers want to experience just that — authentic Mayan and Mexican culture. The good thing about Merida is that it’s not a huge city, but there are just so many day trips from Merida, so again, narrowing down will be key.

In the city itself, you won’t need a car because Merida is walkable and there’s also Uber and taxis. However, for a day trip outside of the city, a rental car is your best option with only two days to travel. However, Mexico does have a great bus system on the ADO bus if you don’t want to drive.

As the 13th largest city in Mexico, and one of the most up-and-coming travel destinations, you have numerous options in and around Merida. Since both the city and the surrounding areas in the Yucatan Peninsula are both worth checking out, that’s exactly what this itinerary will cover.

This is a guest post by Shelley of Travel to Merida.

Two Days In Merida: Where To Stay?

Diplomat Boutique Hotel Merida ($$$): Located on a quiet street in the Santiago neighborhood, the most coveted part of Centro Historico (Historic Downtown), the Diplomat Boutique Hotel is hip and chic. It is also within walking distance of the many things to do in Downtown Merida, including delicious restaurants, fun bars, historic sites, museums, boutique shops, and more.

NH Collection Merida ($$): This hotel is located in the shopping-dining-entertainment complex, Paseo 60, meaning you have everything you need right in the same building. The NH Collection Hotel is located on the best street in Merida, Paseo de Montejo, and has great amenities like a gym, 24-hour room service, and a rooftop pool.

Nomadas Hostel ($): Merida doesn’t have too many hostels to choose from, but even if it did, Nomadas might still be the best one! It has the quintessential colonial bohemian look Merida is famous for, a gorgeous pool area with hammocks to hang out on and escape the daytime Merida heat, and a great location in Centro Historico (Historic Downtown).

How To Spend 2 Days In Merida, A Perfect Itinerary

Merida in 2 Days: Day One

On the first day of your two days in Merida, Mexico, you’ll want to explore the historic City Center and the most beautiful street in Merida, Paseo Montejo. Have your camera fully charged for this day, as Merida is known as one of the most beautiful cities in Mexico with its colorful colonial architecture and historic sites.

Located just next to downtown, there’s the two-mile-long Paseo Montejo, a tree-lined street with great cafes, shops, museums, and monuments. Start your day here at the Monumento a la Patria (Monument to the Fatherland).

This large monument is unlike many because you can go right up to it and check out the details. Created by Colombian sculptor Romulo Rozo, the monument has more than 300 hand-carved figures depicting Mexico’s history, and also important Mayan gods like Chaac, the rain god.

From here, enjoy a leisurely stroll down the paseo, past the historic mansions like Palacio Canton and Casa 495, both now museums. For a nice brunch, head to one of the great cafes along Paseo Montejo like Cafe Marago, Casa Chica, Rosas & Xocolate or Pan y Koffee.

If you’re looking to shop, head to the beautiful Casa Tho Concept House. This renovated mansion surrounds a pretty courtyard and has about 10 individual boutique shops with clothing, jewelry, perfume, bath products, and more. For Mexican art souvenirs, check out Posheria.

Next, head to the historic downtown to see many of Merida’s beautiful buildings, historic sites, and replacing parks.

Also check out Parque Santa Lucia (Santa Lucia Park) to see the 8-foot-tall white “Kissing Chairs.” These conjoined chairs can be seen all over downtown Merida, and also throughout the Yucatan Peninsula. Located only a few blocks away, Parque Hidalgo (Hidalgo Park) is a great place to relax and people-watch for a bit.

Downtown has some great shopping, too. If you want to buy authentic souvenirs and Mexican handicrafts, head to the Casa de las Artesanias (Artisan House). This is a fair trade shop run by the government and featuring crafts made by artists in small Yucatan pueblos near Merida.

If you want an after dinner drink, check out La Negrita Cantina, Malahat, La Fundación Mezcaleria, Pipiripau or Mayan Pub. These great Merida bars are all located in downtown.

As one of the Seven Wonders of the World — does Chichen Itza even need an introduction?! Located about two hours from Merida, most visitors will want to visit the Mayan Ruins of Chichen Itza, a UNESCO World Heritage Site considered among the best ruins in Mexico.

You can take a bus to Chichen Itza from Merida, but know a rental car is quicker and more convenient. Either way you get there, plan to stay for about three hours, as this is a large site.

There are about 10 separate buildings, Mayan Ruins complexes and things to see at Chichen Itza. If you want to hire a guide, you can do so right at the entrance for about $1,000 pesos ($50USD); for a site with this much historical significance, do consider a guide!

Click here to book a day trip from Merida to Chichen Itza.

After a long few hours at Chichen Itza, you’ll want to check out one of the Yucatan cenotes. Wondering, What is a cenote? They are underwater sinkholes with freshwater found in only a few places on Earth, with the largest concentration of about 6,000 right in the Yucatan.

Considered one of the most beautiful cenotes in Mexico, Ik Kil Cenote stands out among the thousands. It is also located only about 10 minutes from Chichen Itza, so many combine the two for a nice day trip. It looks like a secret tropical garden and the water is always about 75°F, so it will feel so refreshing after visiting Chichen Itza.

After your swim at Cenote Ik Kil, head back to Merida for a shower before a nice farewell dinner. If you want to splurge, head to Ku’uk, one of the most upscale fine dining restaurants in Merida, which serves elevated Yucatecan cuisine. It is located on Paseo Montejo, where you’ll find plenty of bars for a night cap after eating.

If you’re looking for somewhere more casual, head to Catrin, just two blocks off Paseo Montejo, so you also have those same great bar options. Catrin is a hip indoor/outdoor gastropub with funky artwork murals painted on the walls outside. It has a  fun atmosphere and great food.

When is the best time to visit Merida

The best time to visit Merida is during the colder months, from November to March. Located in the tropics, the weather is hot and humid nearly year-round, but the winters are sunny and cool. While temperatures hover around 85-95°F all day and night in the summers, it’s a cooler 70-75°F in the winter months.

December is a nice month to visit, when the city is decorated with festive lights. There’s also Hanal Pixan, the Mayan Day of the Dead celebration, which takes place Oct. 31-Nov. 2 with parades and altars set up around town for the annual Paseo de las Animas (Parade of Souls).

How to get from Merida Airport to the City Center

There are buses and colectivos (small, shared vans) in Merida, but honestly, the city doesn’t have great public transportation. Since an Uber or taxi to downtown from the airport is only about $5-10USD, these two are your best options.

If you want to save a few dollars on the taxi, exit the airport, walk out to the main road and get the taxi there. Doing this will usually save you about 50% off the taxi cost, as there’s an additional charge to pick passengers up curbside.

Bio: Shelley is a former Miami travel magazine editor who ditched the office for the world! After traveling solo to 14 states in Mexico, she has called Merida, Mexico home since 2019. Shelley runs the site, Travel To Merida, to help visitors plan the best Merida trip.