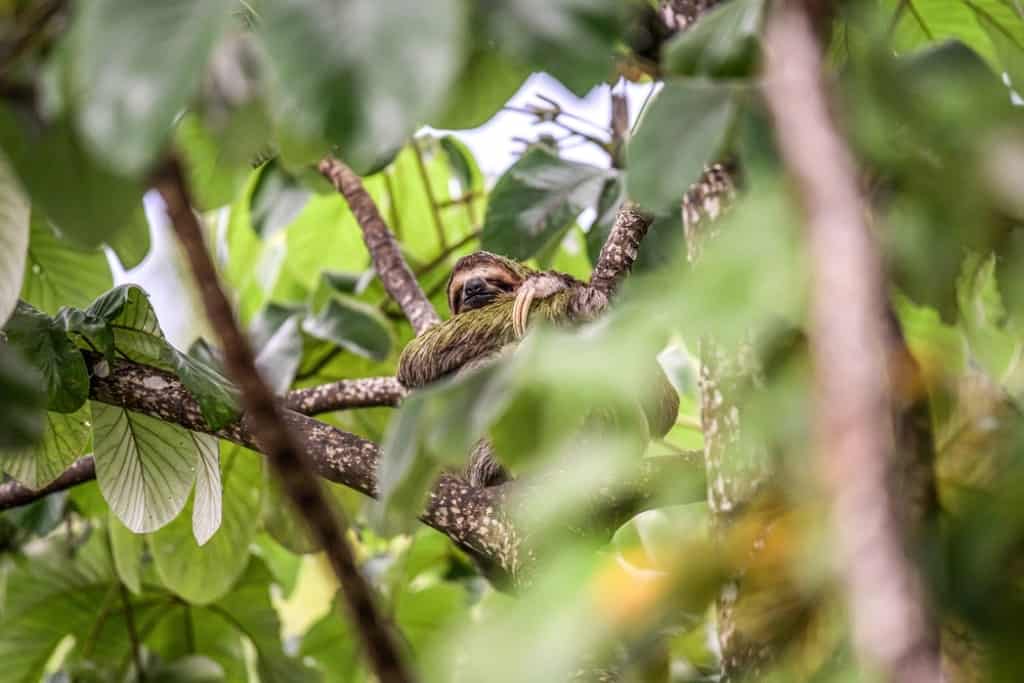 Costa Rica is thought to be home to approximately 5% of the entire world’s biodiversity – that is, all plants and animals found on the planet.

Due to Costa Rica’s equatorial location, coupled with prime climatic conditions, life has exploded. One particular mammal found in Costa Rica has taken the world by storm. A mammal that resembles a motionless ball of fur. Meet the sloth!

Read on to discover more about these lazy mammals, and some of the very best places in Costa Rica to spot them in the wild.

Sloths are a type of arboreal mammal found throughout the rainforests of Central and Southern America. They have found fame for being one of the slowest animals alive today, typically moving no more than 40 meters per day.

Due to this largely sedentary lifestyle, sloths have an incredibly low metabolic rate. This means they spend up to 20 hours sleeping. The remaining hours are spent munching away on leaves and other foliage.

All sloth species are largely arboreal. However, they do occasionally venture down to the forest floor. In most instances, this will be to urinate or defecate. Approximately once a week, a sloth will make the arduous journey down the canopy and onto the dangerous forest floor. We still don’t fully understand why sloths do this.

Across the Americas, there are 6 species of sloth. In Costa Rica, you will find two species: Hoffman’s two-toed sloth and the Brown-throated Sloth. Let’s explore these two species in more detail.

Species of Sloths in Costa Rica

Reaching up to 12kg in weight, Hoffman’s two-toed sloths are one of the larger arboreal mammals in Costa Rica. Largely solitary and nocturnal, and found high in the canopy, they can be difficult to spot.

As the name suggests, two-toed sloths have two toes on their forearm. Large, curved claws can be found at the end of their toes, which they use to grip onto branches.

Two-toed sloths are slightly more active than their three-toed relatives, moving from tree to tree in search of food. Their diet consists of leaves, buds, twigs, fruits, eggs, and small vertebrates. They have large, peg-like teeth that they can use when threatened.

They have shaggy brown fur, which has been known to turn green. This isn’t bad hygiene. Rather, this is an evolutionary advantage, as it allows the sloth to camouflage into its habitat. The green coloration is caused by an ecosystem of algae and fungus, which in turn, attracts moths, beetles, and mites.

Smaller, no heavier than 6kg, the brown-throated sloth can often be found in the guarumo tree; its’ favorite food source. Unlike two-toes sloths, three-toes are strict folivores. This means they can only eat leaves. Whilst many can eat a large diversity of leaves, most will choose just a few different species of leaves, and guarumo is a firm favorite.

Three-toed sloths are fine-tuned to the environment, and as a result, are much more sensitive to environmental changes. They can only be found in certain regions of Costa Rica, and have adapted to specific conditions.

Not only are three-toed sloths smaller, but they also have different physical appearances. A small tail can be found, which is used to help the animal dig shallow holes on the forest floor. These holes are thought to be makeshift lavatories.

Arenal Volcano National Park is one of Costa Rica’s most visited destinations. Found in the province of Alajuela, the tropical rainforests around Arenal are home to many sloths.

One of the highlights of the region is booking on to the sloth-watching trail, found just outside the main town of La Fortuna. With a knowledgeable and bilingual guide, you will be taken around 2 kilometers worth of trails, set amid a 20-hectare reserve.

Expect to see multiple sloths in their natural habitat, as well as many other species that call this jungle home.

To find out more about sloth watching in Arenal, click here.

Just a stone’s throw away from Arenal, a rolling expanse of verdant jungles and cloud forests can be found. Welcome to Monteverde National Park. Covering an area greater than 105sqkm, this National Park is home to an incredible diversity of life.

Due to the higher elevation of Monteverde, the climate can become quite chilly. Due to this, only the two-toed sloth can be found here. Due to the nocturnal behavior of two-toed sloths, we recommend booking a night tour of the National Park.

Private tours can be organized, with prices starting from $40. Liberate your senses with a professional and experienced guide. One of the top tours in the region is Refugio De Vida Silvestre.

We appreciate spotting sloths in the wild can be quite the challenge, so why not discover Selvatura Park. This ecological park is home to about 20 sleepy sloths, many of which have been rescued. In a guided tour, you can get up close and personal (but no touching or selfies) in a natural and large enclosure. Click here to book your spot.

Famed for being one of the best places for seeing sloths in Costa Rica, Puerto Viejo is home to both species of sloths. Take a trip around the world-renowned sloth sanctuary, where you will gain an insight into the behavior of these iconic residents. Tours operate daily, starting from 8 am.

Guides will introduce you to some of the rescued sloths, share stories of how they arrived, and delve into the conservation work underway to protect this iconic species. To book your tour, follow the link below:

If you would like the chance to spot sloths for yourself, head out for a guided walk through the forests of Cahuita National Park. Just under 3000 acres of protected rainforests, Cahuita plays host to an amazing diversity of life. Crane your heads to the canopy, as you search for the sloths. Click here for more information and to book a tour.

One of the most remote regions of Costa Rica, Tortuguero is only accessible via boat or plane. This, however, does not stop tourists from visiting this ecologically diverse landscape. And for good reason too. Within the 312kmsq National Park, expect to find both species of sloth, as well as monkeys, big cats, and tapir.

There are a few different, and unique, options for viewing sloths in Tortuguero. You could book a kayak tour, which would allow you to silently meander through the many waterways and canals, deep into the forests of Tortuguero.

You can also book a terrestrial night tour, departing from the main town of Tortuguero. These tours often support local businesses and the economy of the region. Many of the locals of Tortuguero have lived here their entire lives, and know exactly where to look for sloths.

Tour times vary but expect each to last between 2-3 hours. Bilingual guides and binoculars are provided. Discover more about the tours on offer in Tortuguero by clicking here.