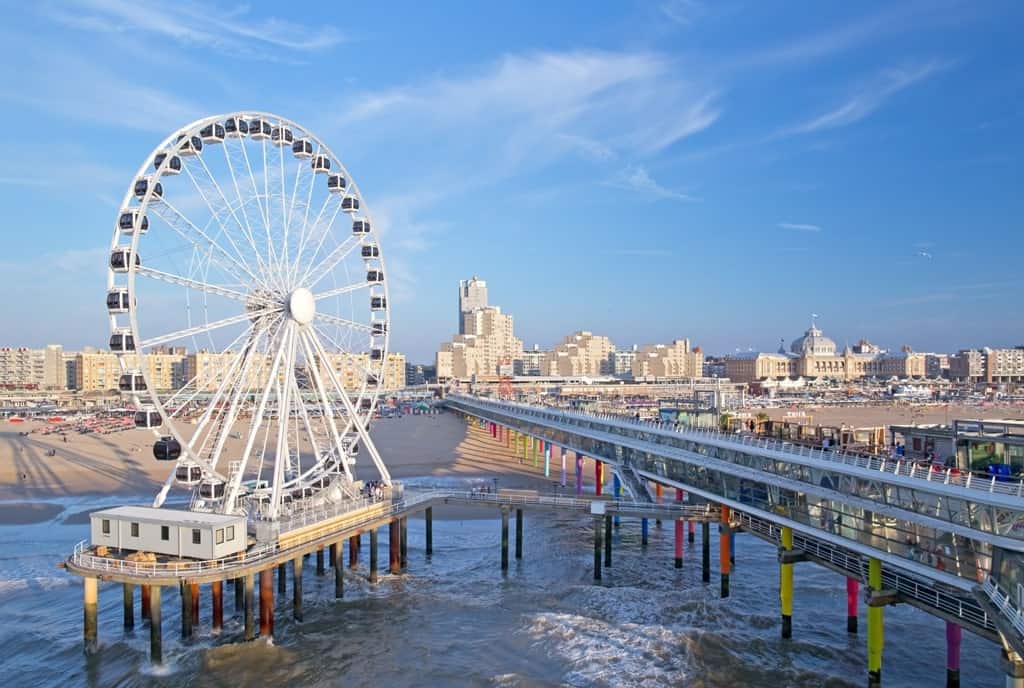 The Hague is a coastal city located on the western coast of The Netherlands, along the North Sea. It is the seat of the Dutch parliament as well as the United Nations Court of Justice, and it is also the residence of the Dutch king. It is not, however, the capital of the country.

The Hague, or Den Haag, is home to The Netherlands most popular seaside resort, Scheveningen, and a nearby, smaller, resort known as Kijkduin.

The Hague has an 11 kilometre long sandy beach to the south, where the two resorts are located. I recently spent a few days there. In addition to exploring the city, we stayed at the wooden Beach Houses along Kijkduin and spent time at both beaches. Both resorts are great for surfing and kite-surfing all year round.

The resorts are located about 5 kilometres from the centre of The Hague. To get there, you can take a local bus or tram. Like most of The Netherlands, The Hague has plenty of bike paths, so if you’re inclined to cycle, you can get to these resorts by bicycle. Because it is a coastal region, it’s typically flat, with some gently rolling hills.

The beach resort of Scheveningen

Scheveningen was The Hague’s first beach resort, and as such is popular with families and tourists. It is the larger of the two beach resorts.

Scheveningen pier was built in 1901. It burned down in the Second World War and was rebuilt in the 1959 and restored in 2015. The ferris wheel is the most popular attraction at the pier, but the newest attraction at the pier is a zipline, where you get a birds-eye view of the beach and coastline.

Some attractions in Scheveningen include Madurodam, the pier, Sports Club and Beach Stadium, and plenty of restaurants and shopping at Scheveningen Harbour. At Madurodam, you can view Holland in Miniature and learn how the Dutch created a country from uninhabited land along the coastline plus see all of the history and culture of The Netherlands in just two hours.

Just in front of the  pier you will find the Grand Hotel Amrath Kurhaus, the Grande Dame of Scheveningen, with a history dating back to 1818. Originally a concert hall and hotel with 120 rooms, the building was heavily damaged by fire in the 1880s and rebuilt in a Victorian style.

Until the 1960s, it was a famous concert hall; the last performance here was in 1964 by the Rolling Stones. The concert hall closed and the building fell into disrepair; it was restored and reopened as a five star hotel in 1979.

The Grand Hotel Amrath Kurhaus is a monumental seaside building with 265 classically-styled rooms, grand ballrooms, and the largest terrace in Scheveningen. Kurhaus attracts locals and tourists, even those not staying at the hotel, for wine or beer on the terrace in warmer months. It also has a wonderful traditional spa.

Legoland Holland will open at Scheveningen, next to Kurhaus. It will be an indoor discovery centre, family-friendly and aimed at children ages 2 to 12. While it faced some opposition, construction is underway and the discovery centre will open in May 2019. This is the first Legoland in The Netherlands and the fourth in Europe.

Where to eat in Scheveningen

The beach resort of Kijkduin

Next door, Kijkduin beach is slightly smaller than Scheveningen. Very family-oriented with beach clubs and restaurants, Kijkduin is popular all year long. Kijkduin lies on the edge of a wide stretch of dunes.

Like Scheveningen, Kijkduin has terraces and boulevards lined with shops, restaurants, and attractions.

One of the most popular attractions in Kijkduin is the Celestial Vault, and artificial crater in the dunes. You can lie in the middle of the enclosed vault and look up at the sky. Another must see, and great for kids, is the Beachcomber’s Shed where you can see all sorts of treasures found while walking the beach.

Where to eat in Kijkduin

We had breakfast at the Habana Beach Club, one of the most attractive and sunniest spots along Kijkduin beach. The menu is a typical European breakfast buffet, or you can choose from fresh yogurts and toasted sandwiches, fresh fruits, and smoothies. The beach club is open from March to October, during the beach season.

Where to stay: The Beach Houses

The Beach Houses are located at Kijkduin beach, right along the dunes and facing the sea, perfect for families and couples. They are entirely independent houses with power and wifi. Each house can accommodate up to five people.  In the specific beach houses that we stayed pets are not allowed and smoking inside the houses is not permitted.

I enjoyed my visit to The Hague, spending time in my beach house and experiencing the friendly Dutch sea lifestyle. The Hague and its charming seaside resorts make a nice complement to the bustle of Amsterdam, and are a great addition to a Netherlands itinerary.

I was a guest of the The Hague Marketing Bureau but as always, opinions are my own.