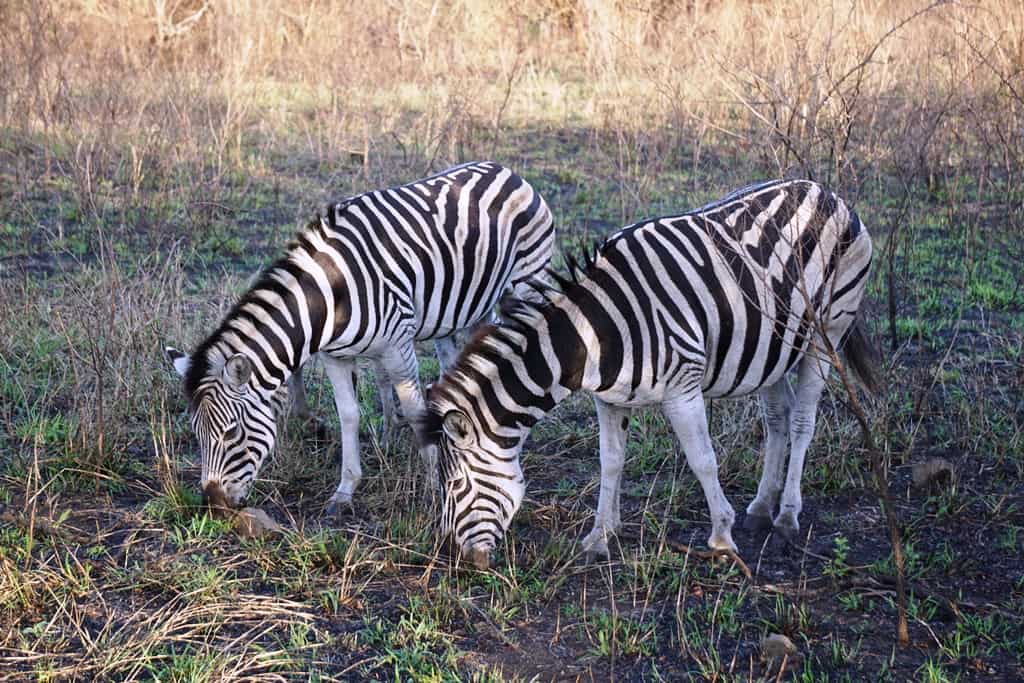 A trip to sunny South Africa would be incomplete without the opportunity to bask in all its natural glory. Its abundance of game reserves makes it possible to do just that. Renowned for its Big Five sightings consisting of elephant, lion, buffalo, cheetah, and rhinoceros, game reserves are the perfect setting to view all five and more. Most game reserves are governed by the South African National Parks (SANParks).

However, private game reserves are scattered all throughout the country’s nine provinces. Enjoy a variety of adventure activities unique to Africa including a Safari, hikes and bush drives. Guides and Safaris are led by qualified and registered tour guides who take thorough care of guests to the reserves. Reserves have accommodation situated on-site for an intimate experience with nature. A handful of prominent game reserves and parks are discussed below in no particular order.

The best Game Reserves to visit in South Africa

Addo is situated in the Eastern Cape in the Sundays River valley region and is the third biggest game reserve in South Africa. Home to the Big 5, Addo is specifically named in favor of its 550 plus elephant herd which densely populate the reserve. Addo is governed by SANParks, making it open to public visitors for a perfect day visit. Alternatively, the park offers accommodation in its luxury lodges, country lodges, boutique-style hotels, and tented camps. The perfect place for avid campers, visitors are also welcome to set up private tents in the designated areas, each equipped with a braai area for the real South African feel.

A day visit costs as little as R86.00 per day visit and on-site accommodation prices from R890.00 per person sharing, upwards. Besides elephant, rhino, lion, buffalo, buck, and leopard can also be spotted, among other species. The gravel roads are lined with large tortoises and mongoose which freely roam the 120 000-hectare reserve.

Besides its rich diversity of wildlife, travelers will also enjoy the archaeological sites in the vicinity including bushman rock. Addo boasts mega-park status, which extends as far as marine reserve and islands home to the world’s largest populations of Cape gannet. Addo’s marine park is also home to the second-largest breeding population of African penguins in the world, with the largest such population situated in the Cape Peninsula, another South African gem.

A short drive from Addo and Port Elizabeth, Amakhala is a privately-owned game lodge neatly situated amidst resident wildlife. The Big 5 can be observed in its vicinity, including zebra, giraffe, cheetah, and antelope. The Reserve spoils its guests for choice with its array of safari options, river cruises, and game-viewing alternatives. Fossil sites are scattered throughout the lodge area itself. The upmarket accommodation and service offering prices at R3580.00 per person sharing, upwards. Activities include game drives, bush walks, birding, and even a river cruise and spa treatments at the Reserve.

Home to a large variety of wildlife including cheetah, giraffe, zebra, white rhino, buffalo, et cetera, Kragga Kamma Game Park’s wildlife roam the park freely and unrestricted. Situated on the outskirts of Port Elizabeth, the Park allows day visitors to observe the wildlife by car and prohibits all forms of hunting and disturbance of the game. This is perfect for everyday visitors as it is not necessary to travel by 4X4, and perfect for all weather conditions.

The site offers a 2-hour guided tour by way of Landrover with a certified guide as an alternative to those who also wish to learn about the history of the area. Neatly situated within the backdrop of nature, lodge accommodation can be spotted where wildlife may roam your doorstep. Self-drive entrance prices at R100.00 per adult, and guided tours price at R795.00 per person. Accommodation prices at R1190.00 per person sharing, per night, upwards. 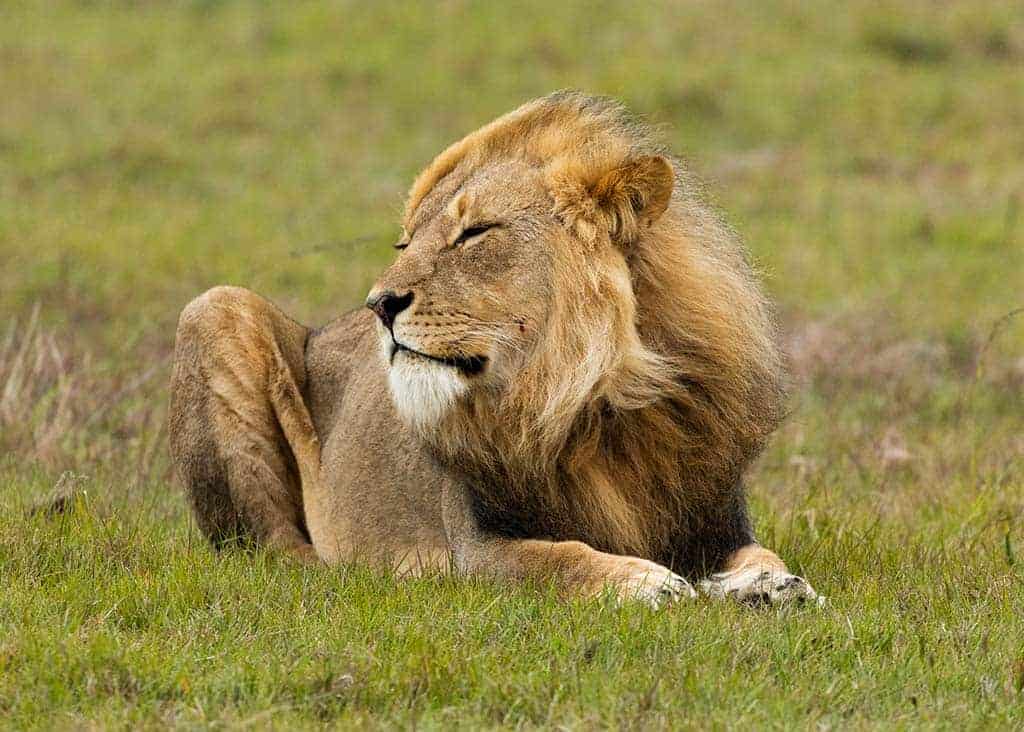 Another Eastern Cape gem, Lalibela offers an unforgettable wildlife experience. The Big Five can be observed on game drives, tracking safari tours, and even evening game drives, a rare option of game reserves. Wildlife roams freely and unrestricted in the vicinity, so no public roads are available for day visitors. Spanning 7500-hectares, the private reserve boasts five biomes in its region. Game sightings are regular and extend past the Big Five. Hyena, cheetah, hippo, and giraffes can easily be spotted. The Reserve offers luxury accommodation and an array of on-site restaurants donned in Safari themes. Accommodation prices at R2650.00 per person sharing per night, upwards. The pricing is full board and covers meals and activities, as well. Fun for the whole family, Lalibela also offers child-centered Safari tours and swimming activities. 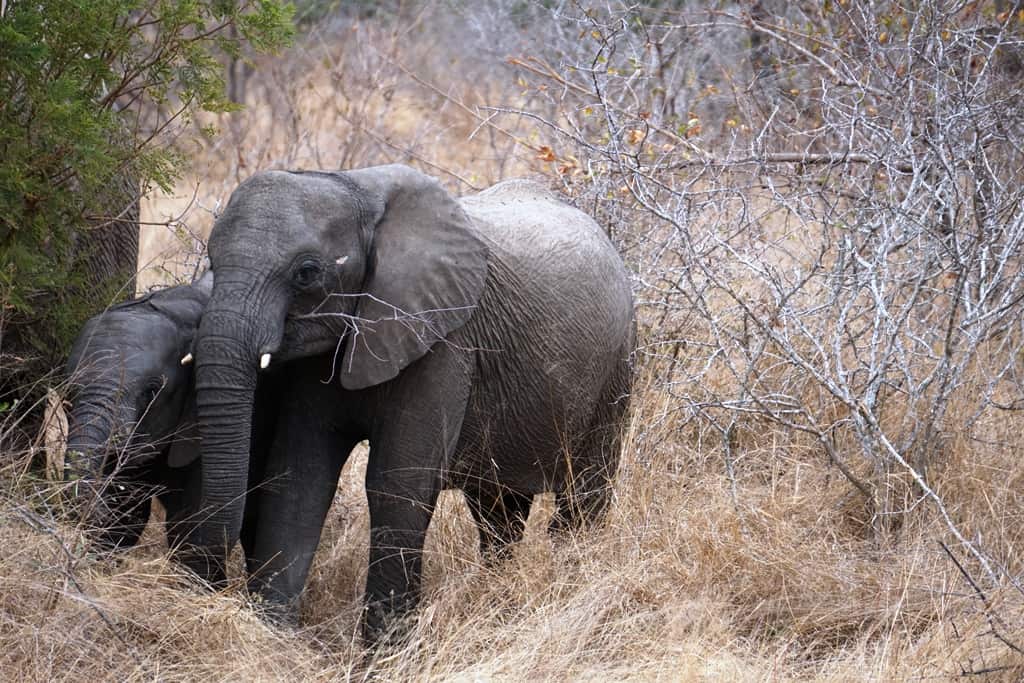 Probably the best-known national park, and deemed South Africa’s most exciting African safari destination, the Kruger National Park is the home of the Big Five, among other unique wildlife. The Kruger Park contains within its expanse award-winning Private Game Reserves such as Sabi Sands, Timbavati, Kapama, Manyaleti, Thornybush, and Balule.

Approximately 147 species of wildlife can be observed throughout the Park, including the Big Five, white rhinos, impala, kudu, crocodile, and African wild dog packs.

The Park guarantees an interactive experience with its accommodation situated directly in the way of wildlife, offers rivers, and safari experiences where lions can be observed in close proximity. Accommodation offerings include luxury accommodation, as well as tented camps and lodges for a more authentic feel. The food is a topic of its own, and five-star facilities are available for guests’ comfort.

A unique offering, family Safari packages are available, and programs are tailored specifically to families and children where necessary. Day-long and guided Safaris are available throughout the year. Vacation packages are immersive experiences into nature and range from walking Safaris, 5-day Classical Wildlife and Culture Safaris, 6-day Classic Panorama and Kruger Safaris. 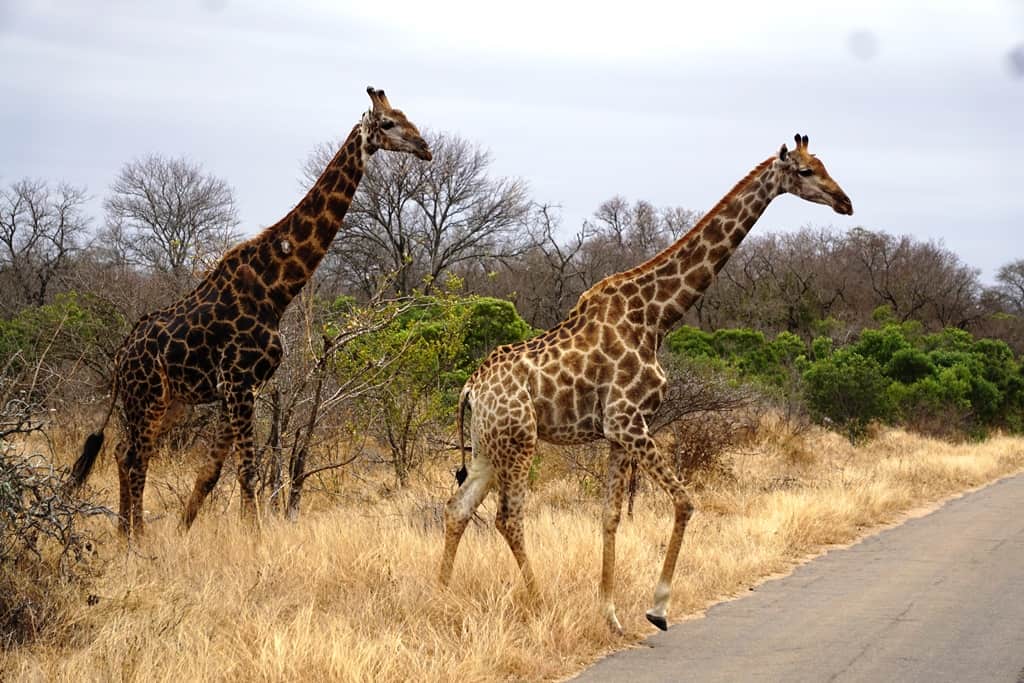 Surrounding areas offer activities such as elephant-back safari, magical hot air balloon flights, amazing spa treatments, and horseback riding tours. Nature conservationists and animal lovers will enjoy a visit to the wildlife rehabilitation centers in the surrounds which protect endangered and breeding species of wildlife in the area.

Visitors are advised that the Park is located in a sub-tropical Lowveld zone, making it a malaria-prone area. Visitors are required to be immunized prior to entering the region. 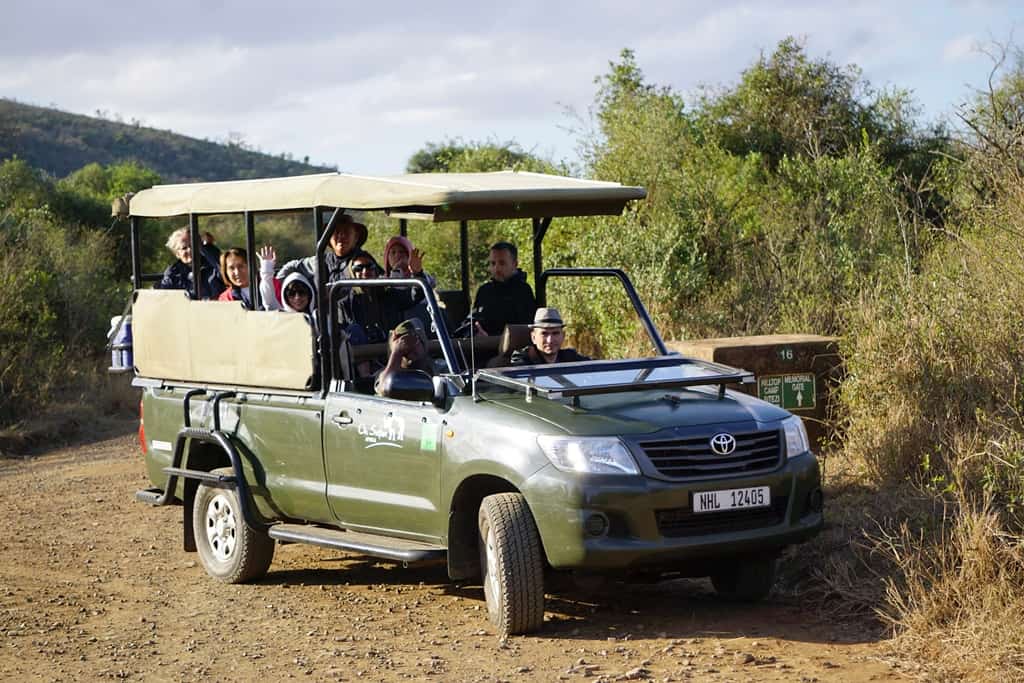 Situated in Kwa-Zulu Natal, this game reserve is the oldest in South Africa, dating back to 1895. The reserve combines the Zulu culture with its fascinating wildlife. Known for its White Rhino conservation projects and Big Five viewing, Hluhluwe hosts a Centenary Capture Centre which emphasizes conservation education and sets the yardstick for animal capture. Spanning a vast 96000-hectares, the vicinity once served as the hunting ground of King Shaka, a historical Zulu monarch whose story is etched throughout indigenous history.

Besides the Big Five, visitors are certain to observe Wild Dog species, giraffe and nyala. The northernmost section of the reserve is densely concentrated in wildlife and bird species. Self-guided options are available throughout a range of clearly marked auto trails. Guided tours and safaris are available with prices available upon request. On-site accommodation ranges from chalets and three lodge options. 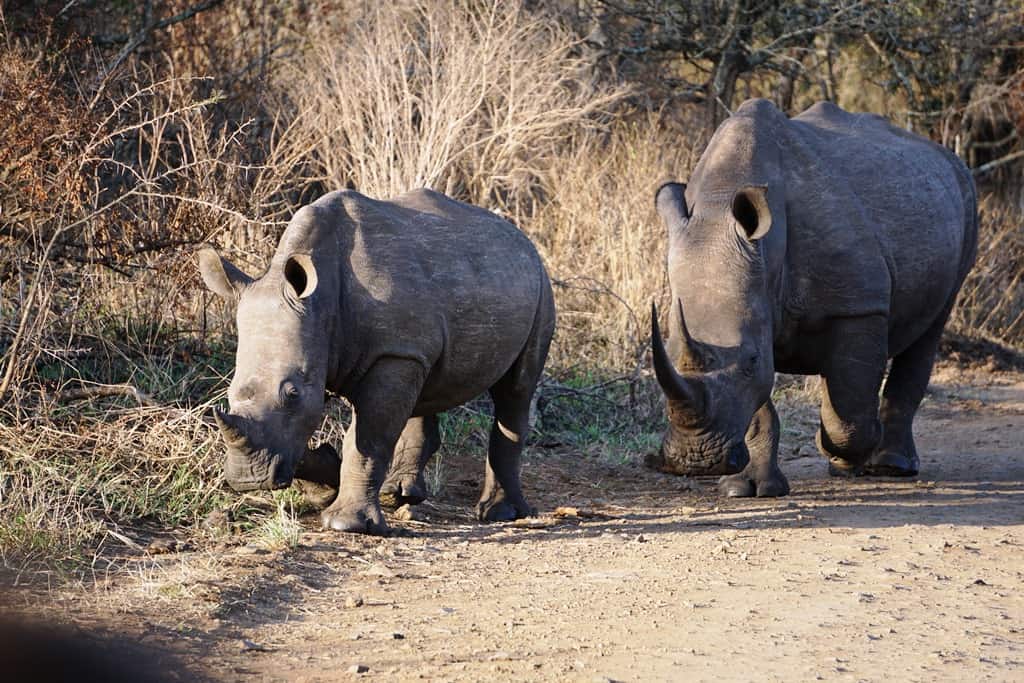 Packages combining safaris and accommodations are also available and range from R1230.00 per person sharing. Imfolozi Game Reserve is situated in the northernmost section of the reserve, and Hluhluwe in the southernmost section, combined to bring ultimate value to travelers. The southern section includes tented accommodation for an experience closer to nature.

Nestled in the arid landscape of the Kalahari Desert, Kgalagadi is surrounded by vast red sand dunes. This 3.6 million-hectare conservation area flanks South Africa in the south and Botswana in the north. What makes Kgalagadi different from other game reserves is that its wildlife species comprise largely of the migratory game such as Gemsbok, Eland, Blue Wildebeest and Springbok, South Africa’s national animal and name of the winning rugby team. The reserve is definitely something different, with exit and entry points between the two countries, and a nearby exit heading to Namibia. The Reserve consists of five picnic sites, a Predator Centre, and on-site shops and accommodation. Accommodation ranges from $USD per night per person sharing, upward.

Literally translated into peace and tranquillity, visitors can enjoy a safari experience and impeccable service. The oldest privately-owned game reserve in Kwa-Zulu Natal, Thula Thula puts a keen focus on conservation in the area, where four of the Big Five can be spotted. The Reserve is diverse in its landscapes, offering fantastic backdrops of riverine bush, savannah and forest areas. The Nseleni River passes through the Reserve and has an important historical and cultural meaning for the Zulu nation.

Thula Thula caters to the needs of recreational visitors, and also serves as a conference site and wedding facility. Accommodation is stylish and campfire meals can be enjoyed in bomas, which are outdoor enclosures intended for meal-sharing. Accommodation prices from R3200.00 per night per person sharing in low season and operates on a sliding scale. Prices are for full board guests and include the price of on-site activities. Activities include bush walks, game drives, and an on-site spa that offers massages. 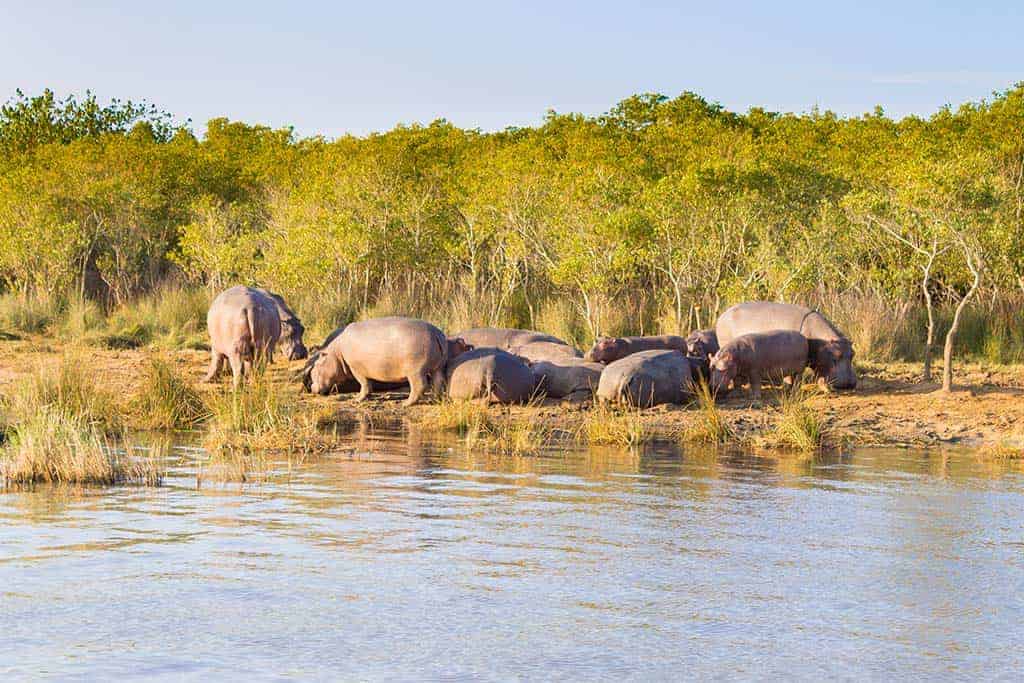 Situated in St. Lucia in Kwa-Zulu Natal province, Isimangaliso Wetland Park is a proclaimed World Heritage Site. Isimangaliso is unique in that it stretches along 220 kilometers of the western coast of South Africa until the southernmost border of Mozambique. As a result, visitors can enjoy a unique offering of activities and services where the surf meets the turf. This can be summed up as the place where the world’s oldest land mammal, the world’s largest terrestrial mammal, and the world’s oldest fish share an ecosystem – the rhinoceros, the elephant, and the Coelacanth. 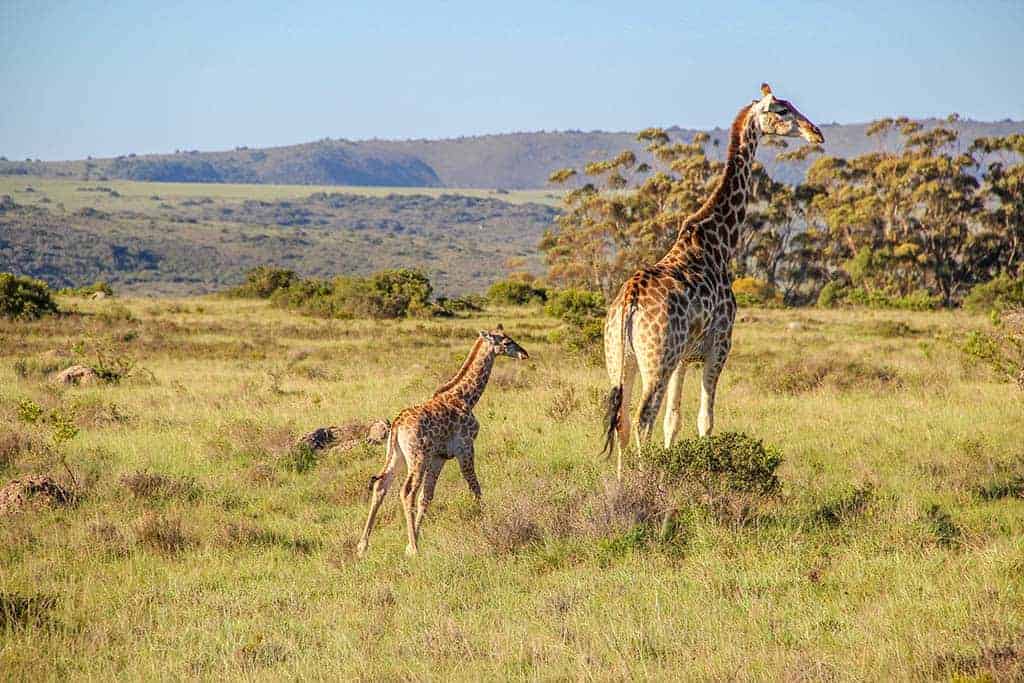 Another Eastern Cape gem, Shamwari is a privately-owned reserve with ecological and cultural significance. A short distance from Port Elizabeth, the Friendly City, it is no wonder how Shamwari got its name which means “my friend”. The Big Five can be easily spotted roaming the area. Designed to accommodate both family travelers and private guests, Shamwari has seven lodges and an explorer camp, each unique in their appearance and accommodating of various groups of guests.

The options have five-star ratings and prices vary throughout the year and guests are requested to visit the website for rates on demand. Photographers are certain to enjoy the photographic Safari package with camera equipment available to hire for the day. The on-site Wildlife Rehabilitation Centre and Big Cat Sanctuaries create awareness of wildlife exploitation and provide a sound education on the lives and protection of these magnificent creatures. Safaris include a visit to these centers where carers also nurse sick wildlife patients back to good health. Conservationists and green fingers alike will appreciate the Centres dedicated to the memory of those who worked with wildlife.

Visitors are advised to make online or telephonic bookings beforehand in case of changes and because of limited capacity in respect of accommodation. Accommodation at the abovementioned reserves and parks is available throughout the year and bloom, particularly around the holiday season. Rates are generally set over the period of a year as can be seen on respective websites, with prices peeking over the Festive Season. Because most game reserves are built around wildlife, animals roam freely and unrestricted. As a result, guests are asked not to disturb the animals in any manner and respect the Reserves as the homes of indigenous animal and plant species alike. Visitors are also requested to check with the respective reserves whether or not immunization is necessary unless expressly stated.