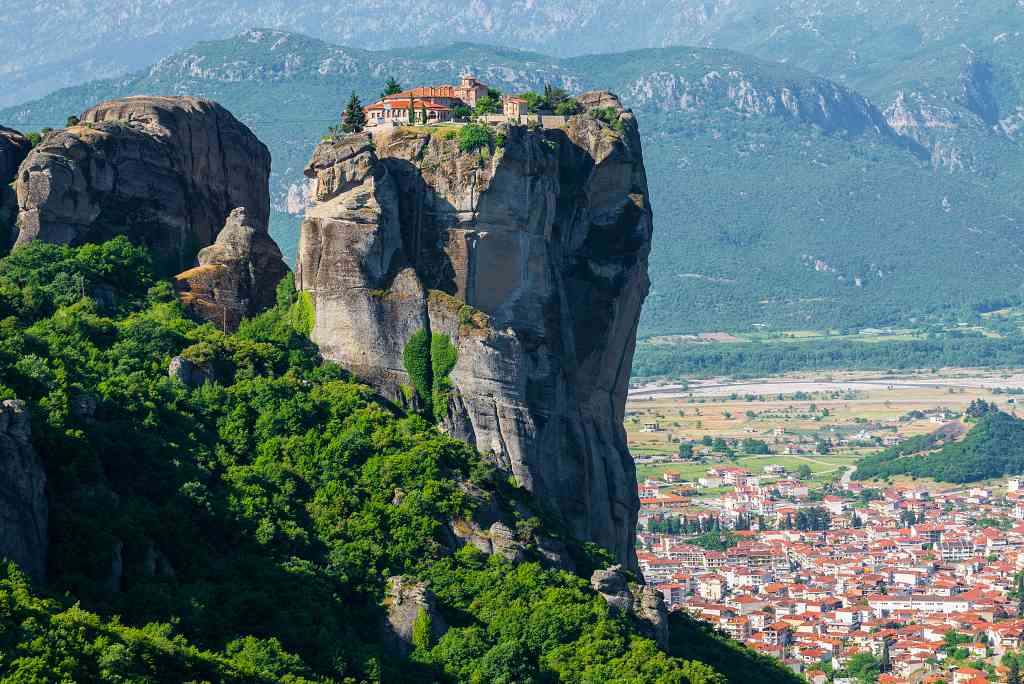 While we’re stuck inside working from home and having endless Zoom calls, there’s no better thing to daydream about than idyllic holidays in the Greek isles. Spending five minutes each daydreaming about the feeling of warm sand between your toes, the crispness of the ocean, and the scent of souvlaki and Greek bakeries in the air will be sure to lighten your mood and have you planning ahead ready for a post-isolation getaway!

Plus, with Netflix, Amazon Prime and Sky Movies on hand, (and plenty of evenings spare) there’s no excuse not to watch a few feel-good films located in spectacular locations to help make those daydreams all the more vivid!

I’ve gathered together a collection of my favourite famous movies set in Greece, with blue skies, pristine landscapes and azure ocean scenes which are sure to help to lift your spirits during this strange and uncertain time.

You might also want to have a look at these inspiring travel quotes.

12 Movies Filmed in Greece You Must Watch Before Your Trip

Mamma Mia is one of the most famous recent movies filmed in Greece, with the island life led by the protagonists Sophie and Donna Sheridan (Amanda Seyfried and Meryl Streep) being admired by millions of fans around the world. The premise of Mamma Mia sees Sophie planning her marriage to beau Sky, and inviting three men (any of which could be her possible father) to the island for the wedding. The ABBA-influenced musical narrative then winds its way through complicated conversations and relationships all while having a light-hearted tone.

Set on the island of Skopelos, Mamma Mia features a number of landscape scenes that will take your breath away. With cerulean coves, rocky outcrops, quaint churches perched on island cliffs, terracotta-roofed houses and pebbled beaches, there’s nothing not to love about the Greek landscapes portrayed throughout the film.

The hilarious Rom-Com My Life In Ruins (also known as Driving Aphrodite), sees Nia Vardalos (star of My Big Fat Greek Wedding) play an American tour-guide in Athens taking groups around famous sites on Greece’s mainland, all while trying to find out more about herself and her life goals. While she seemingly hates her job, the places she visits and the people she meets all play a part in her journey.

Nia, called Georgia in the film, escorts her tour group around Athens and beyond, taking in iconic archaeological sites such as Delphi and the Acropolis. As you would expect, My Life In Ruins features endless blue skies, gorgeous panoramic vistas and stunning scenery which help to make it a daydream-inducing movie you’ll want to watch.

Another movie that takes place in Greece is Before Midnight, the follow on from the two previous films in the trilogy: Before Sunrise and Before Sunset. This romantic film follows the lives of Jesse and Céline who met nine years prior (in the first movie) and who are now on holiday in Greece with their children. A getaway to Greece with their twin girls and Jesse’s son from a former relationship gives the family a lot of time to think away from the reality of their daily lives, and each of the characters begins to question things about their present and future selves.

Before Midnight is set on The Mani Peninsula in the southern Peloponnese region of mainland Greece and the director is thought to have said this was the “perfect backdrop for one to depict what human relationships are really about”. The film sees coastal olive groves, ancient ruins, sprawling landscapes and seaside sunsets all of which leave viewers longing to visit this Greek gem.

4. Sisterhood of the Traveling Pants

The Sisterhood of the Traveling Pants is an American teen comedy about a group of four friends who find the perfect pair of jeans and decide to share the trousers between them for the summer holidays (hence becoming the Traveling Pants). The character Lena Kaligaris is the one who takes said Traveling Pants to Greece as she visits her grandparents in the Cyclades.

What follows during her part of the story is a tale of a summer romance with love interest Kostas Dounas set on the pristine island of Santorini. Viewers enjoy typical white and blue houses and quaint bobbing fishing boats as a backdrop and are of course treated to some classic Greek music as the soundtrack to this section of the movie.

While the film is very much a chick-flick, anyone can enjoy the landscapes of Greece as well as those shown in Mexico and Southern California during other parts of the film.

The 1988 film The Big Blue is a film centred around free-diving in the Mediterranean, but the Luc Besson movie is also about love, life, connecting with nature, reminiscing about the past and much more! The film dramatises the friendship and rivalry of fellow divers Jacques Mayol and Enzo Maiorca from their childhood in Greece to their competitions in later life.

Set mainly on the island of Amorgos, The Big Blue highlights the beauty of the Mediterranean/Aegean, and many film lovers flock to the beach Agia Anna to get a glimpse of this stunningly blue water.

6. For Your Eyes Only

The twelfth film in the James Bond series, For Your Eyes Only is an action movie following the life of MI6 agent James Bond as he tries to locate a missile command system. His plans are, of course, intertwined with romantic affairs and run-ins with dodgy businessmen, with action scenes, car chases and a plethora of incredible landscape scenes. For Your Eyes Only is set in a variety of locations across the globe including Italy, England, The Bahamas and Greece.

The most notable scenes set in Greece are those at Meteora, the almost mythical-looking monasteries atop limestone peaks on the mainland, and those on the island of Corfu. Bond takes romantic walks along the beach, enjoys fast-paced boat trips in the Ionian Sea and spends time in epic villas with picturesque panoramic views.

Check out my posts:

A Full Guide to the Monasteries of Meteora

How to get from Athens to Meteora

Captain Corelli’s Mandolin, the 2001 film starring Nicolas Cage and Penélope Cruz, is based on the 1994 novel by Louis de Bernières and is set in Kefalonia during the time of the island’s occupation. The story pays tribute to the thousands of Italian soldiers that were executed by German forces in September 1943 as well as Greek civilians whose lives were lost both during the war and after in a massive post-war earthquake.

The film highlights secluded coves, rugged landscapes and private piers where the film’s protagonists are able to steal a kiss, and it will make viewers want to add Kefalonia to their bucket list!

8. Tomb Raider: The Cradle of Life

Tomb Raider: The Cradle of Life is one of Lara Croft’s adventures set on the famous island of Santorini in Greece. The premise of the film is that a strong earthquake uncovers the ‘Luna Temple’ built by Alexander the Great, in which Lara Croft finds a magical orb. The adventures that follow are based around the treasures discovered in the temple and the meaning and uses of these mysterious finds.

This film not only makes the most of the scenery above ground but also includes some underwater scenes shot in and around Santorini’s deep caldera. Much of the filming was set in the town of Oia (now a world-famous travel hotspot), which has some incredible viewpoints of both the island and the caldera and surrounding landscapes.

Zorba the Greek is arguably the most famous film set in Greece of all time, with Anthony Quinn starring as the gregarious Alexis Zorba. The plot sees Basil, a British-Greek writer head to the island of Crete with the dream of rekindling his love for writing as well as reopening his father’s old lignite mine. The charming character that is Zorba persuades Basil to let him come along for the ride and what ensues is a story of mishap, revelry, tragedy and of course, classic Greek dancing!

This film is about Greek culture and Zorba’s lust for life, in contrast to Basil, the typically uptight English character, and the setting of Crete creates the perfect backdrop for these relationships to unfold.

10. The Two Faces of January

The Two Faces of January is a thriller set in Athens, Crete and Istanbul about a wealthy couple (Chester and Colette) whose lives become caught up with that of con artist Rydal as they flee from the capital to coast amid an array of misdemeanours. While the film is about plot twists, trust and tempting fate, the backdrops of the Acropolis, Chania, Knossos and the Grand Bazaar allow the viewers to be enthralled by much more than just the narrative. Watchers are treated to vast skies, panoramic landscapes and aerial shots of ancient ruins which will make you long to visit this magical country.

The Bourne Identity is another film set in various locations around the world, including Paris, Prague, Imperia in Italy and Mykonos in Greece. The film sees Matt Damon as Jason Bourne attempting to discover his identity after an attack has left him with severe amnesia. It turns out that Bourne is being hunted, so not only does he have to figure out who he is but also who is out to get him.

While the scenes in Mykonos are only seen right at the end of the film, the beauty of this Cycladic island (namely the parts around Little Venice and the windmills) is enough to make people want to visit in a flash.

Last but by no means least is the charming 1989 film Shirley Valentine following the holiday romance of protagonist Shirley during a trip to Greece. While Shirley begins the trip with her friend Jane, she is soon left to her own devices after Jane sparks a romance of her own with a fellow passenger on the flight. This allows Shirley to spend time soaking up Greek culture and interacting with locals, including Costas Dimitriades, a tavern owner from the village. This whirlwind romance gives Shirley a new lease for life, and while things don’t quite turn out as you’d expect with Shirley and Costas, the trip has still sparked new meaning in the leading lady’s life.

Shirley Valentine was filmed on location in Mykonos, with Agios Ioannis beach being the central point of the movie. The film shows spectacular scenes of boat trips, skinny dipping, quiet beaches and sunset spots which make Mykonos look more appealing by the minute.

So, there you have my top selection of famous movies set in Greece that should keep you entertained for the days and weeks to come.

I’m biased towards movies located in Greece (of course!) but I’d love to hear about your favourite films set in stunning locations around the world and what makes them so incredible. Let me know your top picks in the comments below!