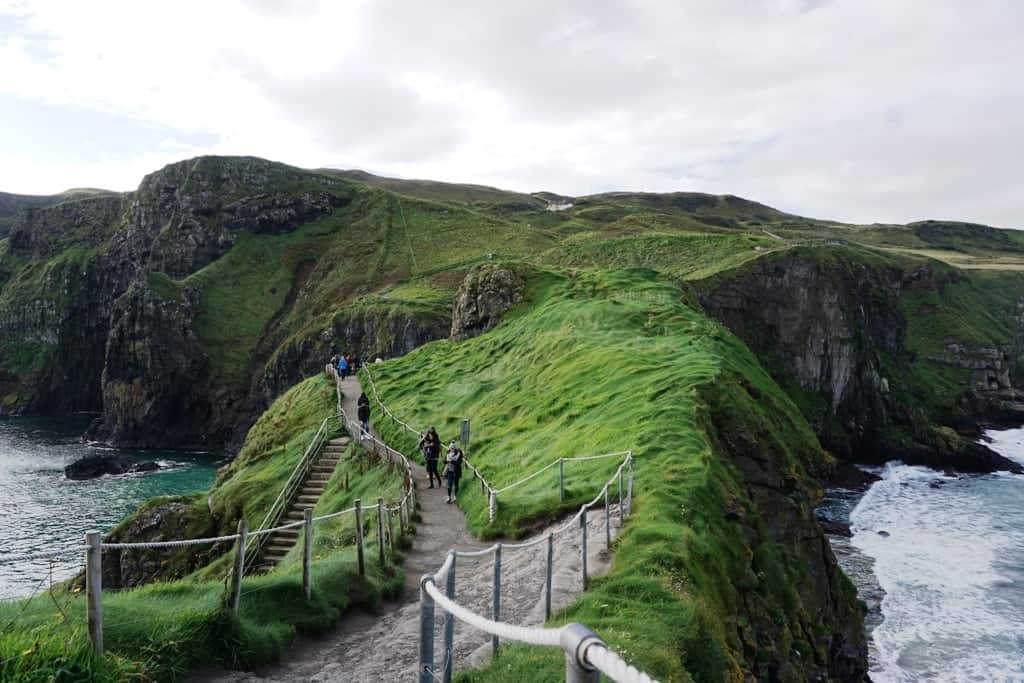 First time in Ireland and before heading south to Killarney for the Travel Bloggers Conference my friend Elena and I decided to make a day trip to Nothern Island and see some of the country’s most famous sights with Irish Day Tours.

We met our guide Phillip at 6:30 in front of the Molly Malone Statue on Suffolk Street and soon we were traveling North towards Belfast through the Irish countryside. “Ireland is the country of the 40 shades of green, and all men look like the Irish actor Jamie Dornan from the 50 shades of Gray,” our guide told us.

He also shared some interesting facts about Ireland, the political situation of the country and how we were going to enter another country and use another currency for the rest of the day.

The Dark Hedges is a road of beech trees that form a tunnel. 150 beech trees were planted by James Stuart in 1775 in the road that led to his mansion the “Gracehill House.” Less than 90 trees remain there today as many were destroyed by various storms.

The Dark Hedges is one of the most popular sites in Ireland because they were used as a filming location for the series “Game of Thrones.” We spent some time walking down this impressive road and trying capture the perfect shot. The place is usually very crowded, but it is still worth it.

Our next stop was the Carrick-a-Rede Rope Bridge and the reason I wanted to do this tour. My friend Elena from Passion for Hospitality, on the other hand, wasn’t thrilled as she is afraid of heights.

The bridge connects the mainland with the small island of Carrickarede. The bridge is small, only 20 meters (66ft) and is suspended 30 meters (100ft) above the water.

It was originally built by fisherman over 350 years ago to catch salmons. Nowadays it is one of the most popular tourist attractions in Ireland and is used by visitors only.

If you liked the Carrick-a-Rede Rope Bridge you might also be interested in these pedestrian suspended bridges around the world.

The bus left us in the parking area, and our guide gave us our timed tickets. There is a fee of  £7  for adults and £3,50 for children to cross the bridge which is already included in the tour price. To get to the bridge, you need to hike for approximately 1km (0,62miles). The pathway is steep at some points, but the scenery is spectacular. Green fields on the one side and sheer cliffs on the other.

After a 20 minute walk with many photos stops on the way we finally reached the bridge and stood in line to cross it as only five people are allowed on it at the same time.

Crossing the bridge was an exhilarating experience and definitely not one for people who are afraid of heights even though my brave friend managed to cross it.

We spent some time on the tiny island taking photos and then made our way back to the parking area. On our way to the Giant’s Causeway, we made a 45 minute stop at a local pub for lunch. (not included in the tour price)

The Giant’s Causeway is a UNESCO heritage site on the Antrim Coast. The entrance to the site is free, but there is a fee of £10.50 for adults and £5.25 for children to access the Visitors Center (not included in the tour price).

The Giant’s Causeway is an area of about 40.000 black basalt columns. These unique rock formations were created over 60 million years ago as a result of a volcanic eruption.

According to the legend though, Finn MacCool an Irish giant had a rivalry with Benandonner a Scottish giant that lived across the sea in Scotland. As he was too big to get on a ship and get to Scotland, he decided to build a pathway with stones.

When he reached Scotland and saw how big the other giant was he decided to go back to Ireland. When Benandonner saw the pathway, he crossed it to kill Finn. Finn’s wife drugged her husband dressed him with baby’s clothes and put him in a crib.

When the Scottish giant saw how big Finn’s child was, he got afraid and went back to Scotland tearing up the causeway so that Finn wouldn’t follow him.

To get to the Giant’s Causeway from the visitor’s center you need to walk for about 1km. Alternatively, there is a bus doing the route for £1 each way.

The site is awe-inspiring, and we spend some time walking around.

On our way to Belfast we briefly stopped for photos at the abandoned Dunluce castle. According to the legend the kitchen of the castle collapsed into the sea and only one boy survived. After this incident, the lady of the castle refused to live there anymore and abandoned it.

Before getting back to Dublin we made a stop to Belfast the capital of Nothern Ireland. Those who wanted to learn more about the political situation in Ireland they could join the Black cab political tour for a fee. We chose to wander around the city see the impressive City Hall and climb at the top of the Victoria Square Shopping Mall and admire the view of the city from above.

We arrived back in Dublin at 20:00 pm tired but full of beautiful experiences and images.  I totally recommend that you do the Giant’s Causeway tour with Irish day tours when in Dublin. Our guide, Phillip, was very knowledageble and with a great sence of humor and we also got to see some of the country’s highlights.

I can definitely say that Ireland is the country of the 40 shades of green. As for the men you have to come yourself and find out..

I was a guest of Irish Day Tours but all opinions are my own.