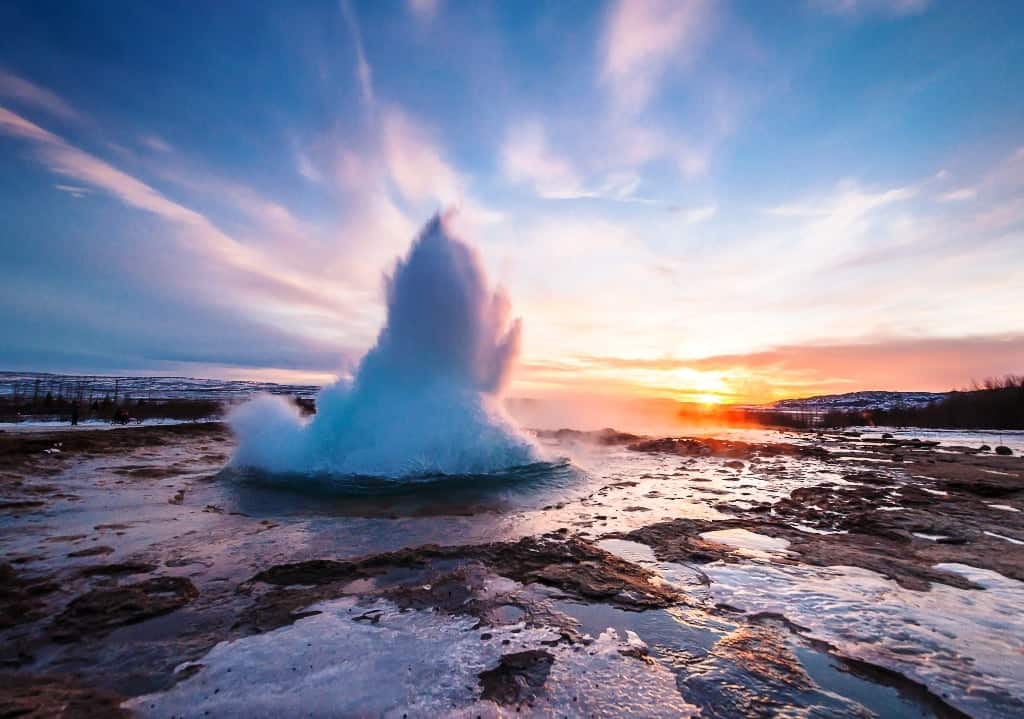 The new hot tourist destination is Reykjaiík, Iceland. Well, Iceland isn’t that warm even during summer, but in the last several years Iceland’s tourism has skyrocketed.   Reykjavík is the largest city in Iceland.  It is home to several museums such as the Saga Museum which recreates the Viking Sagas or a Maritime Museum about the history of Iceland and the sea, and if daring enough the Phallological Museum is a truly unique experience.  But to explore and see Iceland, getting out of Reykjavík is a must.

Reykjavík offers an ideal base to explore the southern coast and western Iceland.   Here are 5 epic day trips from Reykjavík, Iceland:

The best day trips from Reykjavík

Perhaps the most popular tourist day trip in Iceland is to explore an area called the Golden Circle.  The Golden Circle consists of five favorite stops.  The first is Þingvellir National Park.  The national park is a point where you can stand between the North American and European tectonic plates.

The next stop is Geysir which is home to the inactive geyser named Geysir and Strokkur which erupts every ten mins or so.  Gullfoss is one of Europe’s largest waterfalls. Kerið volcanic crater is located on private land but is one newest volcanic features in Iceland, and the caldera has a small lake in it.

Travel Tip:  Rent a car to drive the Golden Circle yourself. Start early and watch the sunrise in Þingvellir to avoid the crowds.

Here are some popular day trips to the Golden Circle:

Þingvellir National Park is part of the Golden Circle and located about 45 minutes east of Reykjavík.  The National Park is worth a day in itself.  The park is home to several miles of hiking and riding trails that take you thru one of the worlds most visited rift valleys.  The trails take a hiker past abandoned farms and the thru the rugged landscape that is Iceland.

Another popular activity in Þingvellir is diving or snorkeling in Silfra and Davíðsgjá.  Silfra is the most popular and famous place to dive in the park.  The water is crystal clear and one can see all the way to the bottom of the fissure.

Travel Tip:  It is possible to camp in the summer in Thingvellir National Park.

Faxaflói Bay is the large bay between Reykjanes and Snæfellsnes peninsulas.  The whale watching tours depart from the town of Húsavík. Almost all the tour companies have a booth in Reykjavík and include transportation. The boats head out into the Faxaflói Bay searching for the famed whales of Iceland.  Depending on the season, one has the chance of seeing Orcas, Minkewhales, Humpback whales, or harbor porpoises.  The Bay is also great for Iceland’s bird life such as puffins.

Travel Tip: Check the whale reports before heading out on a tour.  They report what wildlife they have seen the past couple days

Snæfellsnes Peninsula is about 2.5 hours north of Reykjavík.  There is a lot to do on the peninsula.  The first stop would be a short walk out to the Gerðuberg Basalt Columns.  Another short trail will lead to the top of the columns.  The next stop is a side trip to Italy via the Vatnshellir lave tube.  Vatnshellir helped to inspire Jules Verne’s Journey to the Center of the Earth.

Take time to stop and enjoy the many cliff views along the coast.  Snæfellsjökull glacier offers a range of activities such a glacier walks or ice climbing. Try your hand at lifting the stones at Djúpalónssandur Black Sand Beach.  Fishermen used to test their strength my lifting these four stones.  Another stop along the way is the white sand beaches of Skarðsvík.  It can be a refreshing change to walk along these white sandy beaches.  Be sure to stop my Kirkjufell mountain and enjoy the nearby waterfall.

Travel Tip: Plan for a long day (12 hours including stops).  Along the road are several different mineral springs all of which have a different taste to the water (and maybe some healing properties).

Heading southeast along the coast from Reykjavík for about two hours is a small town called Vík í Mýrdal.  Vík is one of the best places in Iceland to visit the volcanic black sand beaches.  The drive out to Vik provides some great stops to visit Iceland’s natural wonders.  The first stop is the waterfalls of Seljalandsfoss and Gljúfrabúi.

Don’t be afraid to get went and hike thru the small canyon (less than 100 ft) to see Gljúfrabúi.  Along the road, the Eyjafjallajökull Volcano can be seen.  The next large waterfall is Skógafoss. After crossing the one lane bridge, there is a parking lot which leads the way to Sólheimasandur plane crash site.  Just after the plane crash, is the access point for the Sólheimajökulll glacier which offers a chance to do a glacier walk or snowmobiling.

A short while later is the turn off for Dyrhólaey.  Here is the first views of the black sand beaches of Vik.  During the summer this is a great place to see puffins.  The next stop is Reynisdrangar which is home to the Basalt Sea Stacks (some of season 7 of Games of Thrones was filmed here).

You might also be interested in: Self-Drive Day Trip Along Iceland’s South Coast between Reykjavik and Vik.

Travel Tip: It is another two hours to drive down the coast to Jökulsárlón Glacier Lagoon.

What is your favorite day trip from Reykjavík, Iceland?

Jennifer is a mechanical engineer who has combine an full time engineering job while dealing with a travel addiction.  She isn’t afraid of adventure or exploring the unknown.  She is balancing travelling the world with trying to visit all 59 National Parks of the United States.  She has visited the remote national park of American Samoa and explored the Chernobyl Exclusion Zone.

2 thoughts on “The best day trips from Reykjavik, Iceland”