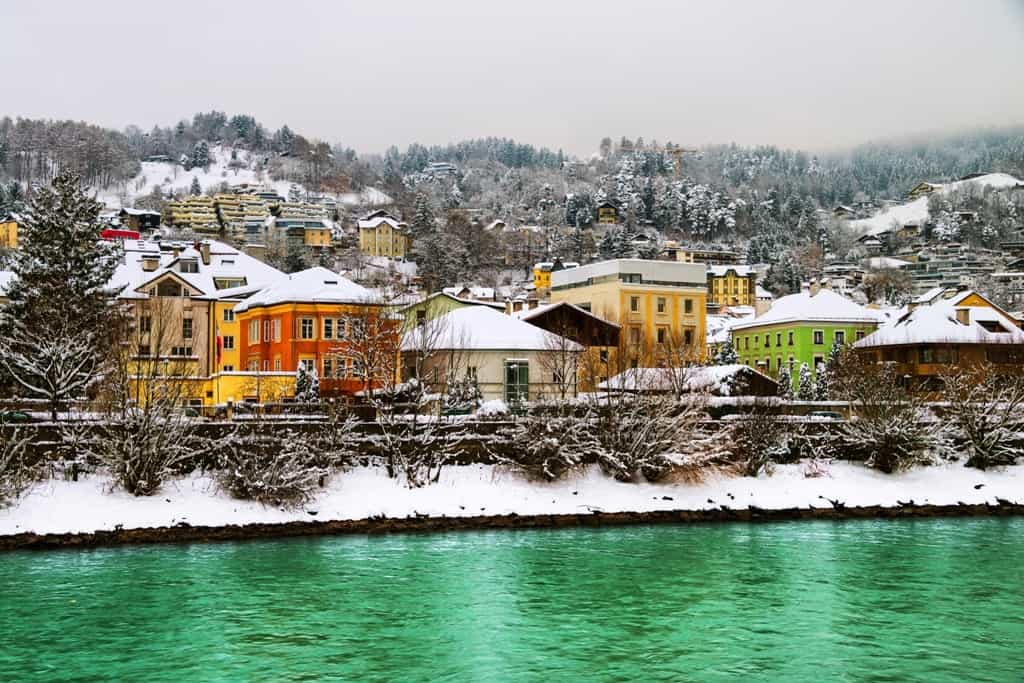 A perfect juxtaposition between urban and outdoor, Innsbruck, Austria is an ideal winter destination. Nestled between high, snow-capped mountains along the River Inn, the city is known internationally for being an epicenter for winter sports and a showcase for the Hapsburg Empire’s legacy. From the winding streets of the picturesque Old Town and charming churches to the smooth slopes of the surrounding mountains and crisp Alpine air, a visit to the “Capital of the Alps” in the winter will leave you feeling romanced and refreshed.

12 Things to Do in Innsbruck in Winter

The old town center of Innsbruck is one of the city’s most popular attractions. The seemingly untouched 500-year old cobbled lanes bring you back in time. The city has done a spectacular job preserving the late-medieval architecture. Cafes and restaurants fill the streets, and a are a great place to sneak inside, warm up for a bit, and enjoy a nice, warm apple strudel. You could easily spend an entire day exploring the Old Town as many of Innsbruck’s attractions are located in the Altstadt.

The Imperial Palace in Innsbruck is one of the three most important historic-cultural monuments in all of Austria. The palace was built in the 15th century by Emperor Maximilian I. The Hofburg underwent extensive renovations in the 18th century under the influence of Empress Maria Theresa, the only Hapsburg female ruler (and mother to Marie Antoinette).

The meticulously restored former imperial residence now serves as a museum where you can see how the Hapsburgs lived in splendor during the 18th century. Only a small portion of the palace—the Imperial Apartments and the Giant’s Hall– is open to visitors. The palace also regularly hosts official events, so check ahead to see if the palace will be open when you plan to visit.

The Swarovski family has been cutting crystal in the small Tyrolian town of Wattens since 1895. Located just 20 minutes outside of Innsbruck, Swarovski Crystal Worlds is one of the areas biggest attractions. This sparkling, glittery, and magical exhibition is all about the bling. At Swarovski Crystal Worlds, the world of museum, theme park, and art installation come together to form a one of a kind experience.

You will feel like you’ve stepped into another world as you are welcomed by the Giant at the front of the park. Walk through the Chambers of Wonder, each designed by different international artists. Step outside to marvel at The Garden. Let the kids loose at the Playtower and playground, or browse the largest Swarovski store in the world for a unique souvenir. From mid-January to mid-February each year, the Kristallwelten hosts a Festival of Lights which light up The Garden for an even more mystical experience.

If you’re looking for the kind of love that can stand the test of time, look no further than the Golden Roof in Innsbruck’s Altstadt. This iconic landmark was built in 1500 to mark the occasion of the marriage of Maximilian I to Bianca Maria Sforza. The roof is adorned with 2,657 fire-gilded copper tiles and is truly brilliant when the sun hits its shimmery surface.

Perched high above the city’s southern skyline is the Bergisel Ski Jump. This famous hilltop has seen some of the world greatest skiers fly through the air during the 1964 and 1976 Winter Olympics. In 1927, ski jumpers raced down the Bergisel in its earliest and most basic form. Today, the modern jump is a stunning piece of award-winning architecture. You can take the lift up to the 50-meter-high tower for splendid panoramic views of Innsbruck. While you’re at the top, imagine what it must be like to have to make the hair-raising descent on skis!

If winter sports aren’t what you’re after, Bergisel hill was also the site of the Four Battles of Bergisel in 1809. It was here that local rebels fought against Napoleon’s army and Bavarian forces. The battle was the inspiration for the Tirol Panorama, Tyrol’s largest oil painting by Zeno Diemer. The impressive canvas painting is a 360-degree experience that overs more than 1,000 square meters, making you feel like you’ve stepped right in the middle of the battle.

This Renaissance castle is a popular attraction and was home to Archduke Ferdinand II. The Archduke was an avid art collector and housed his collection in the Ambras Castle, making it the oldest museum in the world. Don’t miss the palace’s crown jewel, the Spanish Hall, a beautifully appointed example of German Renaissance architecture and home to 27 full-length portraits of the area’s rulers. This lavish freestanding hall was built between 1569 and 1572.

The castle is located in hills of the southern part of Innsbruck and is accessible by both tram and bus.

Can you believe that you can go from Innsbruck city center to the top of the surrounding Nordkette mountains in only 20 minutes? Hop on the Nordkettenbahnenat Innsbruck Congress (560m) to climb at a 46 percent incline to reach the Hungerburg(860m) with gorgeous cloud-free panoramas. The Alpen Zoo is on the way if you want to get off and check it out before continuing up the mountain. Once you get off at Hungerburg, you will have to go to a different building to catch the cable car to Seegrube (1905m).

From Seegrube you will catch the next cable car to 2256m above sea level. To make it to the summit you will have to hike the remaining 78m, but don’t worry—it only takes 15 minutes. At the top, you’ll see the summit cross and be rewarded with 360-degree views that stretch all the way to Italy in the south and Germany in the north. You might even catch some expert skiers traversing their way down the mountain.

Head over to the Olympic Bobsleigh, Luge and Skeleton Track in Innsbruck-Igls for another kind of downhill thrill. Feel like an Olympic bobsledder as you barrel down the track and rush around 14 adrenaline-charged corners. You’ll partner up with a pro-bobsledder to race down the track in just 60 seconds at speeds up to 100 kilometers per hour. You must book in advance, so don’t wait until the last minute on this one!

If you’re planning a trip to Innsbruck in the winter, you should really try to plan it when the city’s Christmas markets are open. Innsbruck has four main Christmas markets that are among some of the best in Europe. Starting in mid-November, booths and stalls line the historic, cobbled lanes of the Altstadt for the Old Town Christmas Market.

The Christmas Market Maria-TheresienStraße runs along Innsbruck’s main shopping street. The Family Christmas Market at Marktplatz is best for families with a carousel and petting zoo. Take the funicular railway line to get to the Panorama Christmas Market on Hungerburg for breathtaking views over the entire city. Whichever market you choose to explore, be sure to try freshly made kiachl, hot doughnuts with sauerkraut, and hot glüwein to warm you up in the chilly winter night’s air.

This Gothic church was built in the 1500s and is located in the Altstadt. Built by Emperor Ferdinand, I in memory of his grandfather Emperor Maximilian I, the Court Church contains an empty grave or cenotaph. The construction of the massive cenotaph took over 80 years and is surrounded by 28 impressive bronze statues depicting Maximilian I’s wives, relatives, ancestors, and heroes.

Of course, you can’t come to Innsbruck in the winter and not talk about winter sports. The city is surrounded by ski resorts, and there is one to suit every taste from casual snowy fun to extreme freeriding. Alpine thrill-seekers and families alike will find downhill activities that are just their speed with perfect white slopes of all shapes and sizes at one of the Innsbruck’s ski resorts:

Innsbruck is Austria’s fifth-largest city, has its own airport, and is an incredibly easy city to travel to from just about anywhere in Europe with direct flights from major cities like Amsterdam, Berlin, and London. If you’re planning on spending a couple of days in the city, consider purchasing the Innsbruck Card.

1 thought on “Innsbruck in Winter: Things to Do and See”