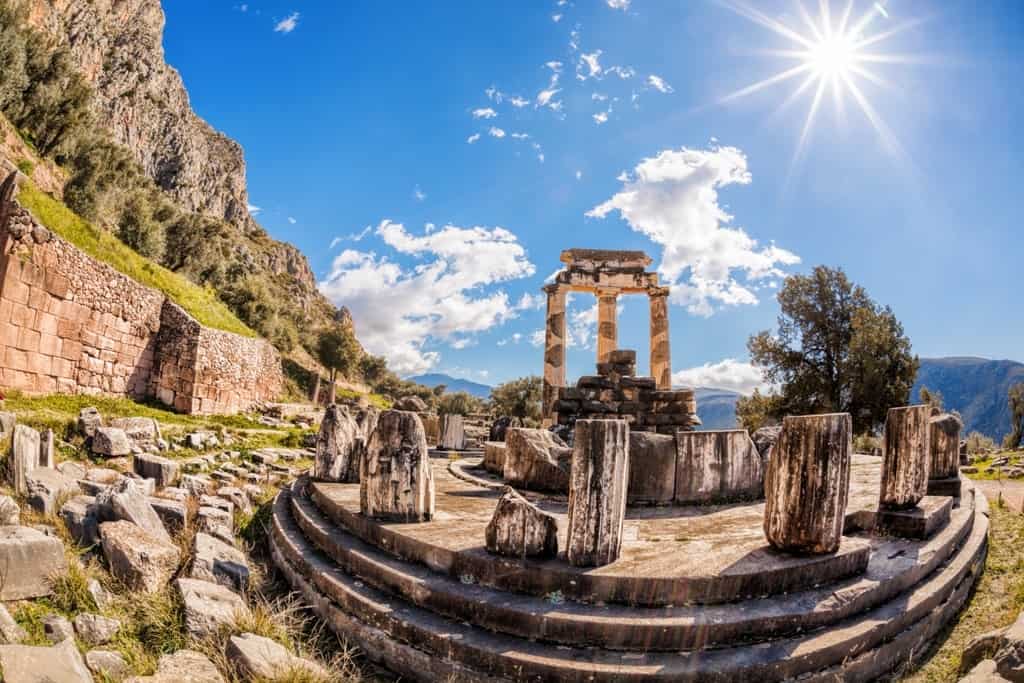 Delphi is one of the most famous and important archaeological sites in Greece. During ancient times, Delphi was a sacred precinct, build on the south-western slope of Mount Parnassus and serving as the seat of Pythia, the major oracle and priestess of Apollo who was consulted by pilgrims from all over the Mediterranean about important decisions. The site was considered by the Greeks to be the center of the world, marked by the stone monument known as the omphalos (navel).

Furthermore, a kind of athletic competition, called the Pythian Games, took place there every four years. The precinct is recognized today by UNESCO as a World Heritage Site. If you visit Greece, do not forget to pass by Delphi and enjoy its mythical atmosphere!

How to Get From Athens to Delphi

You can travel to Delphi from Athens by bus or car, or a guided tour.

By Guided Tour: There are many different day-tour offers that provide a complete visitor experience in Delphi, through the guidance of an expert guide.

I highly recommend this one day guided tour to Delphi from Athens.

By Public Bus: If you are interested in visiting the site on your own, you have to take the KTEL bus with direction to Delphi from Liossion bus station. The bus trip from Athens to Delphi lasts about 3 hours. Check here for more information.

By Rented Car: Otherwise, you can use a rented private car and drive through the National Greek Road Athens – Lamia. At the junction of Thebes, you follow the direction to Levadia and then you continue towards Arachova and Delphi. The distance between Delphi and Athens is about 181 km, so be prepared for a long ride!

Things to Do in Delphi

The temple of Apollo is the most important part of the Panhellenic sanctuary of Delphi. According to tradition, inside the temple, there was a chasm emitting vapors that were inhaled by Pythia, who then entered a state of trance and delivered the oracles.

Today survive the ruins of the third temple built on the same place, which endured many incarnations and alterations. The first temple was built in the 7th century BC, of Doric order, and after two destructions, it was rebuilt a third time in 330 BC, by three Corinthian architects. The temple was also decorated with many sculptures by the Athenian sculptors Praxias and Androsthenes.

The theatre of Delphi is built on the same hill as the temple of Apollo, although on a higher location. It was originally constructed in the 4th century BC using the limestone of Mount Parnassus, and it provided the audiences with a fantastic view of the entire sanctuary and the olive tree valley below.

The theater had a capacity of nearly 5000 people, and it underwent numerous reformations, with the lower seats being constructed during the Hellenistic and Roman periods. In it, musical contests of the Pythian Games and other religious festivals used to take place.

The theatre’s present form, with its stone-paved orchestra, stone seats, and the decorated stage is the result of a 160/159 BC restoration sponsored by Eumenes II of Pergamon.

The Stadium of Delphi

The stadium of Delphi is located above the temple of Apollo, north-west of the theatre, in the highest part of the ancient city. Built in the 5th century BC, it was reconstructed several times through the centuries, with its present form dating back to the 2nd century AD, when Herodes Atticus financed the stone seats and the arched entrance.

The stadium had a capacity of around 6500 spectators, with its track being 177.55 meters long and 25.5 meters wide. The monumental entrance to the east consisted of a triple arch supported by four pillars. The stadium used to host the Pythian and Panhellenic Games, as well as various other sports competitions and music festivals.

The Sanctuary of Athena Pronea

The Sanctuary of Athena Pronea is located to the southeast of the Temple of Apollo. It got the name Pronea, which means ‘before the Temple’, since it was the first thing visitors saw while coming from the east, before arriving at the temple of Apollo.

Its significance is made clear by the fact that people coming to ask for an oracle would first offer a sacrifice to the goddess Athena Pronea, who was believed to be the guardian of Pythia. The sanctuary consisted of several altars, temples, two treasuries, and a Tholos, a round-shape construction. In front of the treasuries, there was a trophy commemorating the victory of the Greeks over the Persians.

Treasuries were buildings where Greek city-states used to safeguard their loots from war and their offerings to god Apollo. Many treasuries existed in Delphi, but without doubt, the Athenian one was the most impressive. It was constructed at the beginning of the 5th century BC and it hosted trophies from important Athenian military victories, symbolizing the strength and domination of Athens over the Persians.

The style of the temple is Doric, with marble being the main material being used for its construction. Furthermore, the external side was decorated with impressive reliefs, depicting the adventures of Hercules and Theseus.

The Archaeological Museum of Delphi

The Archaeological Museum of Delphi is one of the most important and highly visited museums in Greece. Founded in 1903, it hosts important findings that were discovered in the wider area, being arranged in chronological order, beginning from the late Geometric and early Archaic periods. Some of the museum’s exhibits include the Charioteer of Delphi, the frieze of the Siphnian Treasury, the Sphinx of Naxos, chryselephantine sculptures, inscriptions, bronze figurines, and bronze votive offerings.

Delphi Greece is located about 2 ½ hours driving distance from Athens on Parnassos mountain. We took a private bus tour and with stops at different hotels and rest areas, it took us approximately 3 hours each way. Although this was an exhausting trip it was well worth it!

We were given the opportunity to walk around ancient ruins while our guide spoke of the historical significance of Delphi. During the tour, I was amazed at the breathtaking mountain views!

This great story is part of the series Tales from Greece, where travelers share their experiences from their holidays to Greece.