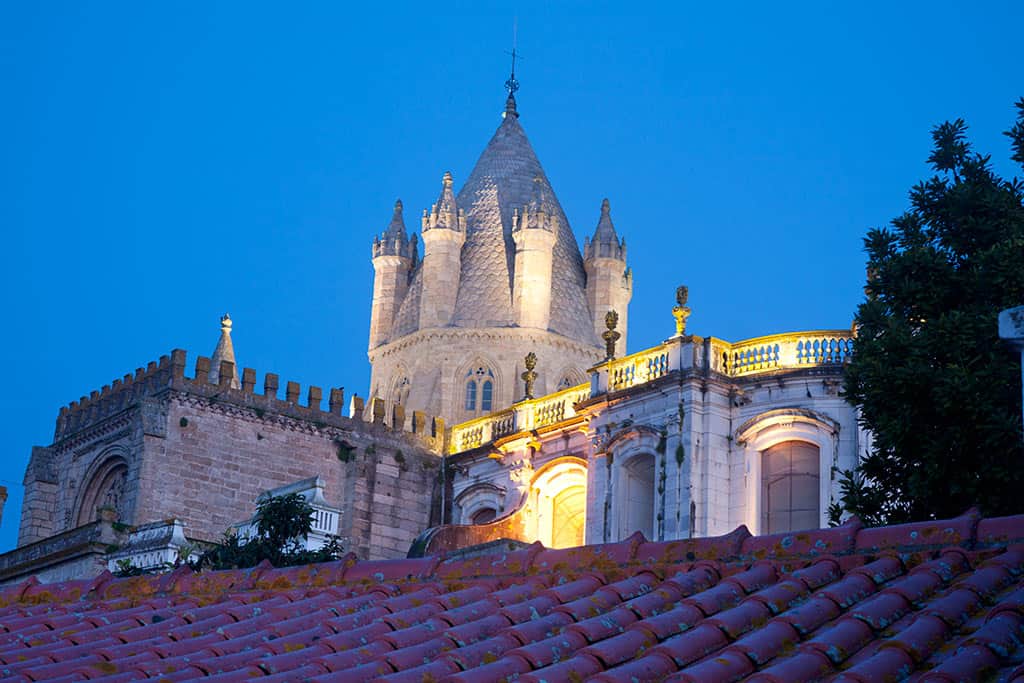 Évora is one of the hidden gems of Portugal, the capital of the Alentejo region with one of the most complete medieval centres in the country. It’s a magical place, its medina-like streets hiding away a Roman temple, a cathedral, some fascinating churches and some great restaurants. It’s small and compact enough to see on a Lisbon to Évora day trip, giving you ample time to get around the main sights.

It’s a city with many layers of history. Évora has been a Roman provincial capital, a Moorish city and the residence of several Portuguese kings.

How To Get From Lisbon to Évora

There are three ways of getting from Lisbon to Evora – by bus, train, or on a tour.

Lisbon to Evora by bus

Rede Expressos buses depart frequently from Lisbon’s Sete Rios bus station, which is next to the Jardim Zoologico stop on the blue Metro line. Returns currently cost around €20, and the journey takes an hour and a half. The bus interchange at Évora is less than five minutes’ walk from the historic centre of the city, so everything is within easy reach.

Lisbon to Evora by train

The train journey from Lisbon’s Oriente station also takes around ninety minutes, with similar costs to the bus. The only drawback with the train is that there are really two outward and two return trains you can catch – at 0702 and 0902 from Oriente, and 1657 and 1906 from Évora.

Lisbon to Evora on a tour

You can also join an Évora tour from Lisbon, including an early morning pick-up from your hotel.

Most of these include extras, such as a stop at a nearby Alentejo winery or the nearby Cromleque dos Almendres, the largest prehistoric stone circle in Portugal. One tour also visits the lovely town of Arraiolos, which is renowned for its hand-woven tapestry rugs.

Click here to book a day trip from Lisbon to Evora.

Things to See in Évora

The first stop for most visitors to Évora is the ancient Templo de Diana. It’s the best-preserved Roman ruin on the Iberian peninsula, dating from around the 2nd century AD.

It may seem highly unlikely, but the temple was hidden in plain sight for centuries – first as part of a fortress that was built around it, then an abattoir.  This may explain the Temple’s remarkable state of preservation. The exquisite detailed carvings wouldn’t have survived as well had they been exposed to the elements for centuries.

The Temple is the focal point of the most beautiful square in the city. On one side the Palacio Cadaval, the residence of the Dukes of the same name, was originally built by the Portuguese royal family. Their private chapel next door is even more remarkable, its interior walls decorated with beautiful 18th century blue and white azulejos, traditional Portuguese tiles.

Évora’s skyline is dominated by the three towers of the Sé, or Cathedral. It sits at the highest point of the hill, just behind the fascinating Museu de Évora.  It’s the largest medieval cathedral in Portugal, originally dating from around 1200, but with additions throughout the following centuries. The 14th-century Gothic cloisters are stunning, and there’s also a Manueline (later Portuguese Gothic) chapel and Baroque chancel.

From a distance, the Sé looks like a citadel or city by itself, with its hotch-potch of towers. As you get closer, you realize it’s almost like a fortress, with its battlemented roof. You can climb up there for a closer look and some great views over the city. Unfortunately, I happened to go up there at the same time a thick fog descended.

Evora’s old town is full of improbably narrow, cobbled streets, lined with whitewashed houses, many painted yellow around the doors and windows.  One of our favorite things to do in Évora was wandering and getting lost down these streets and alleyways. Some of them are bridged by a series of pointed Gothic arches, like the nave of an open-air church. Everywhere you look, new secrets reveal themselves, whether it’s another tiny medieval church or a little restaurant tucked away down a narrow side street.

The Chapel of Bones

Most visitors to Évora on day trips from Lisbon make their way to one of the most macabre attractions in Portugal, the Capela dos Ossos, or Chapel of Bones. The Chapel isn’t unique – the ossuary in the Catacombs of Paris is much bigger – but if you haven’t seen anything like it before, it’s quite a shock.

The walls of the Chapel are lined with the bones of several thousand monks – mainly skulls, and arm and leg bones. A cheery message above the chapel entrance translates as, “We bones await your bones,” a reminder that death awaits all of us. After cramming in thousands of skeletons, I’m not sure they really needed to dangle a desiccated monk from the ceiling as well. But if ever you needed convincing about the merits of cremation, look no further than this poor fellow.

The park across the street from the Chapel of Bones is a welcome change. We stocked up on bread, cheese and chouriço sausage from the nearby market and had a wonderful picnic in the grounds, watching the peacocks preen and cavort in front of some distinctly unimpressed hens in some atmospheric ruins. We found out later that these ruins are actually fake – built in the 19th century, and designed to look much older!

Évora’s main square is the Praça do Giraldo, named after Gerald the Fearless, the hero of the Portuguese Reconquista who expelled the Moors from the city after 450 years of rule.

The Praça is the nearest we found to ‘busy’ in Évora, with a few popular pavement cafes ideal places to stop for a while to admire the view up the square to the church of Santo Antao (St Andrew). Many roads meet in the Praça, and along these, you can find some of the best restaurants in Évora. We particularly liked the Café Alentejo, on Rua do Raimundo, just off the main square.

How to spend 4 days in Lisbon

The best day trips from Lisbon

5 Days in Portugal, a Detailed Itinerary

One day in Porto

Things to do in Ericeira

A Guide to the medieval village of Obidos

Things to do in Amarante

David has been a professional photographer, art director, and writer for twenty years. He’s originally from Wales and currently lives in Australia with his wife and son.  He is the owner of delveintoeurope.com and travelwithlittleone.com. You can follow him on Instagram.