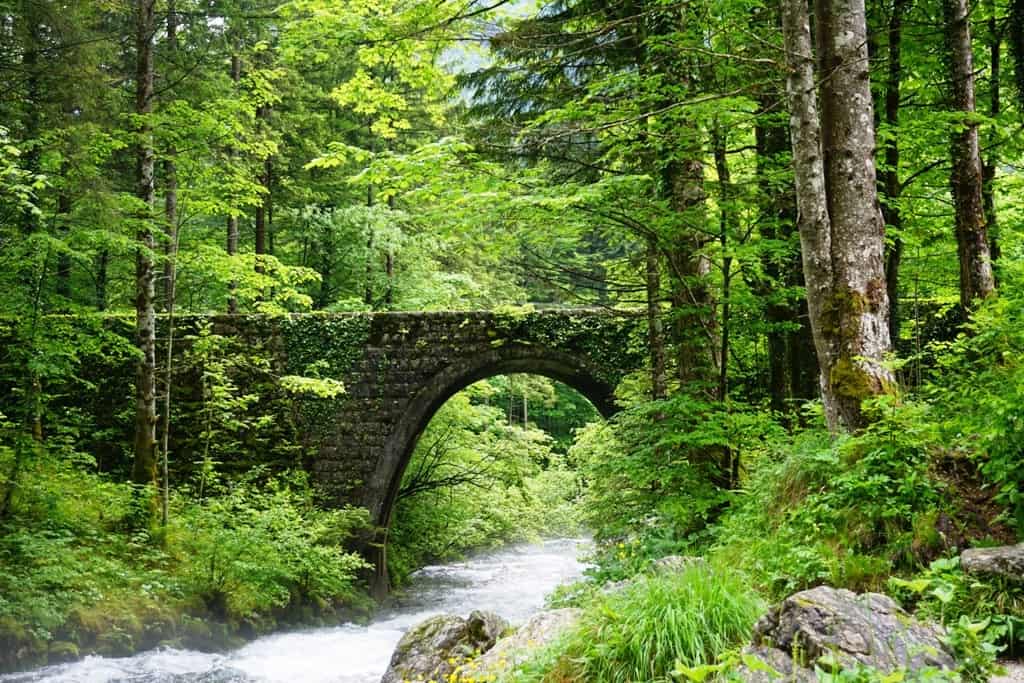 Kamnik lies in northern Slovenia, in the mountains. It is just twenty minutes by car from the capital city of Ljubljana, and very accessible by both train and bus. There are 40 daily connectings to Kamnik by bus and 18 by train. The international airport is a short distance away to the west. I recently spent two days in Kamnik, exploring this beautiful region and learning about the history of the eastern European country.

Slovenia’s history, as we know it today, is very intertwined with the former Soviet Union and the annexation of nations into Yugoslavia and Czechoslovakia. In the past though, it has been ruled over by Romans, Carolingians, and the Habsburgs. In the middle of the 19th century, the Slovenes, after decades of peasant revolution, entered into a peace period. There were printing houses, national theatres, and more. A national infrastructure appeared. Slovenia birthed many great artists, architects, and authors and the period just before the turn of the century was like a new Renaissance. By the early 1910s, though, many Slovenes had immigrated to the US, South America, and Egypt.

Following World War II, Croatia, Slovenia, and Serbia merged into what we know as the Kingdom of Yugoslavia. The period from World War II to 1990 was fraught with instability, ending in the demolition of the Yugoslav empire into three distinct countries: Slovenia, Serbia, and Croatia. Kamnik and the alpine region of Slovenia portrays influences predominantly from the Austro-Hungarian Empire. This is evident in the town’s Bavarian architectural character as well as some language nuances and suburban town names.

Things to do in Kamnik 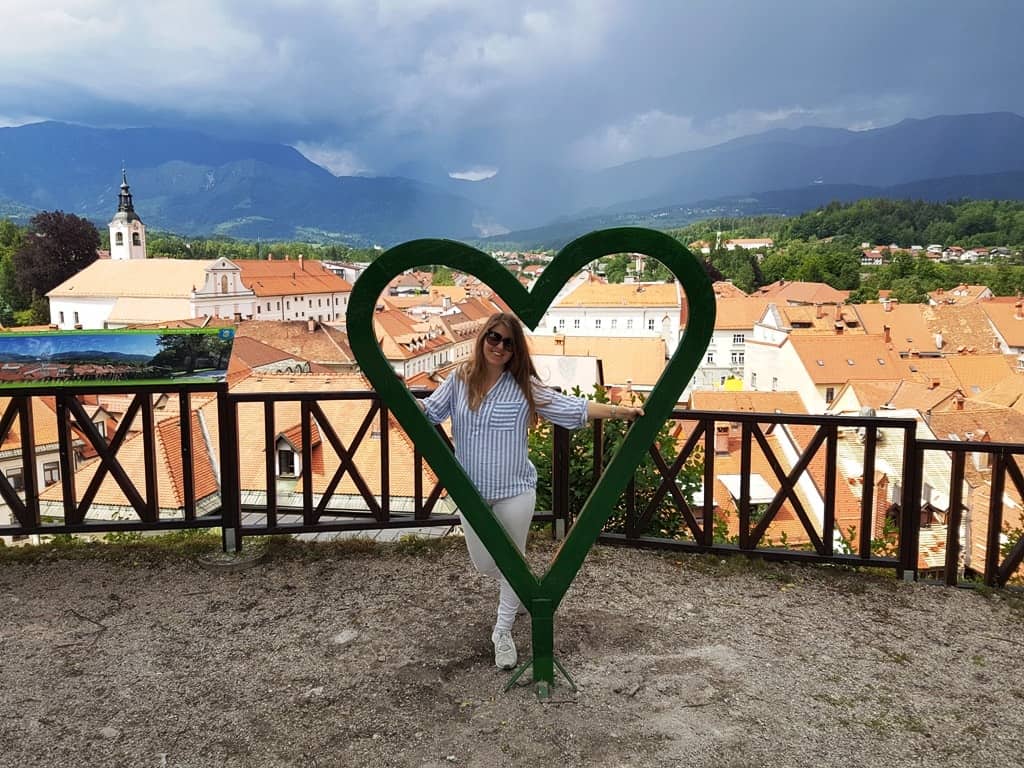 Despite the fact that Kamnik is quite small, there is still plenty to do here. This list isn’t exhaustive but should give you some ideas for what to see and do in Kamnik, Slovenia.

The Chapel at Mali Grad

Mali Grad, or Little Castle, is one of Kamnik’s oldest and most important buildings. The Chapel of St Eligius is one of the most important medieval monuments in Slovenia and boasts incredible frescoes as well as a unique wooden ceiling.

Situated atop the 585 foot high hill called Krniška Gora, Stari Grad, or Old Castle, is just ruins of one of the most strategically placed castles in Slovenia. The hike to the top takes 35-40 minutes although you could continue climbing for another 20-25 minutes for an aerial view of the castle itself. 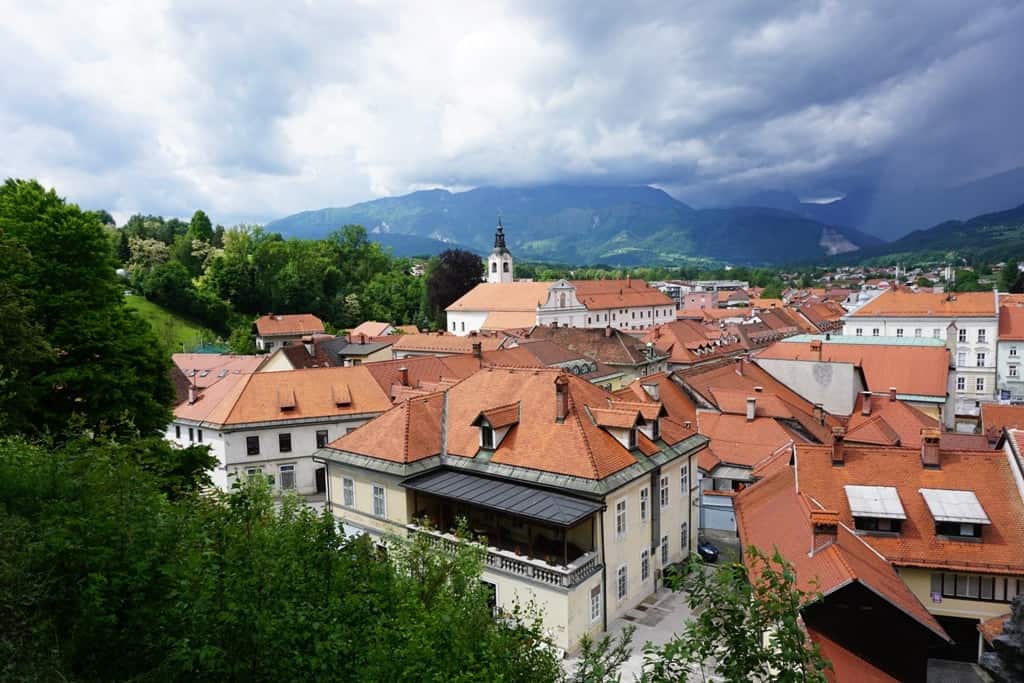 Also known as Zaprice Castle, this renovated manor in the town centre is home to the Kamnik Intermunicipal Museum. Here, you can see a collection of herdsmen artefacts from the Velika Planina, Thonet wooden furniture, and both prehistoric and Middle Age artefacts from the region. 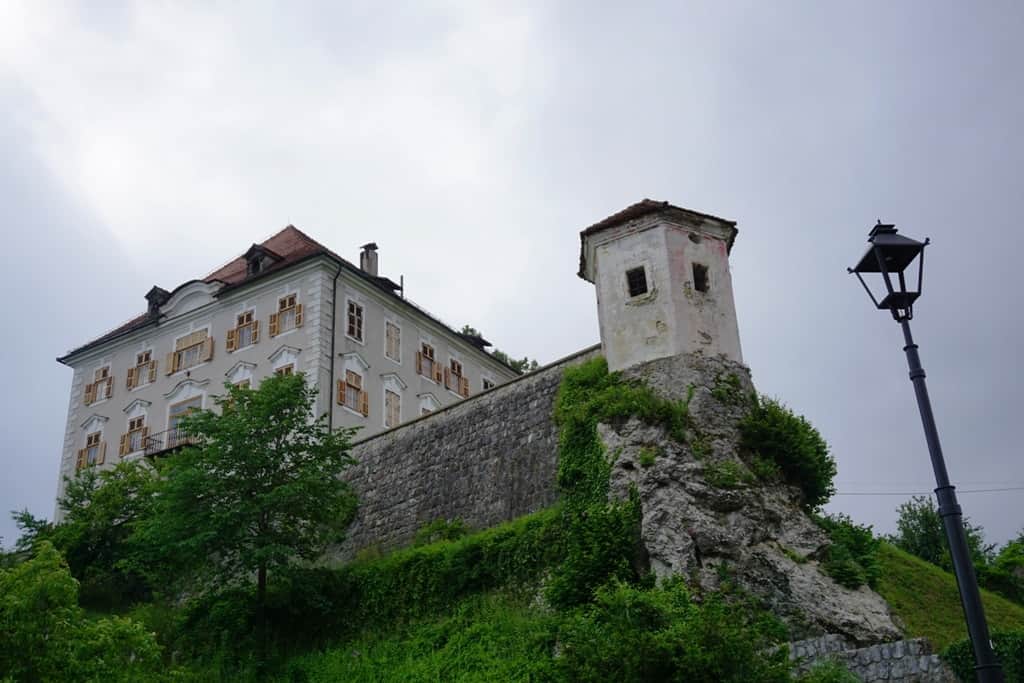 Sutna is Kamnik’s main street, one of the oldest in the city. It is first mentioned in the 13th century along with the Church of the Immaculate Conception. The modern Baroque church, though, only dates to the 18th century. Sutna is lined with pretty pastel coloured houses and cobblestones.

Located very close to the centre of the city, the 15th century Franciscan Friary is well worth visiting. Visitors can see the Chapel of the Holy Sepulchre, renovated by master architect Jože Plečnik, and the library. Jože Plečnik is a famous 20th century Slovenian architect, known primarily for his avant garde and Cubist influences on the modern identity of Ljubljana, Vienna, Prague, and Belgrade. The 17th century library houses over 10,000 books all printed before 1799, including an early Slovenian-translated Bible printed in the 1500s. 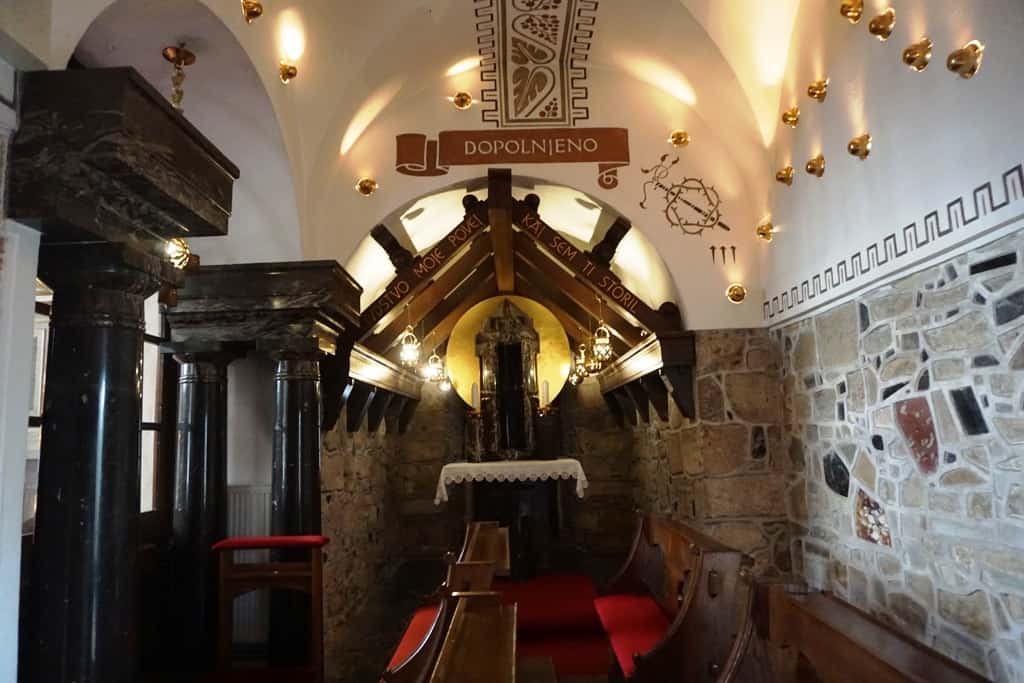 Terme Snovik is a high-altitude eco resort with thermal baths, rooms and apartments for overnights or longer stays, and healing therapies like massages, facials, saunas, and beauty treatments. They also have vegetable and herb gardens where guests can pick their vegetables. The on-site restaurant also uses the gardens for much of their produce. We spent a couple of hours relaxing in the thermal pools. Terme Snovik has both indoor and outdoor pools and is suitable for adults as well as children. 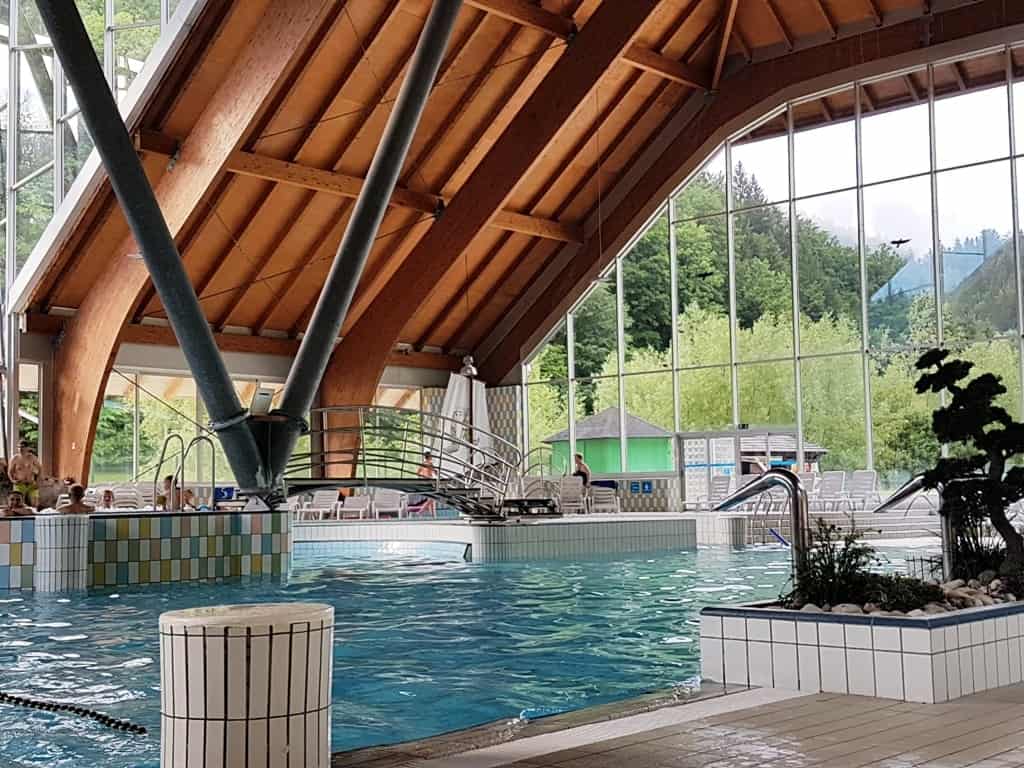 The Kamnik Arboretum is a great destination for those who love to be outdoors. We spent a morning there exploring the 85-hectare gardens, which have over 3,500 different species of plants – including over 1,000 different species of roses. It is located among the ruins of a former mansion and offers water features, playgrounds, walking trails, and more. There is also the Arboretum golf course nearby, for those interested in golf.

Velika Planina is a shepherd village in the Alps, one of the few remaining seasonal villages of its size and use. Each June, the plateau comes alive with the herdsmen who return here to tend their flocks over the summer; they leave in September. It is a tourist site as well, and very easy to get to. The typical architecture here is unique. The small huts have steep roofs covered with pine shingles that extend low to the ground.

To get here, we took the cable car from the Kamniska Bistrica valley, then the chair lift. From the first stop, we walked to the herdsmen huts. Here, we learned about their life on the mountain, saw their Preskar Museum, and learned how they make the local Trnic hard cheese. The Snow Mary chapel lies a few minutes walk above the herdsmen huts; during our visit we visited this very famous chapel. The current chapel is new (1988), having been rebuilt on the site of the chapel which was burned by the Germans. 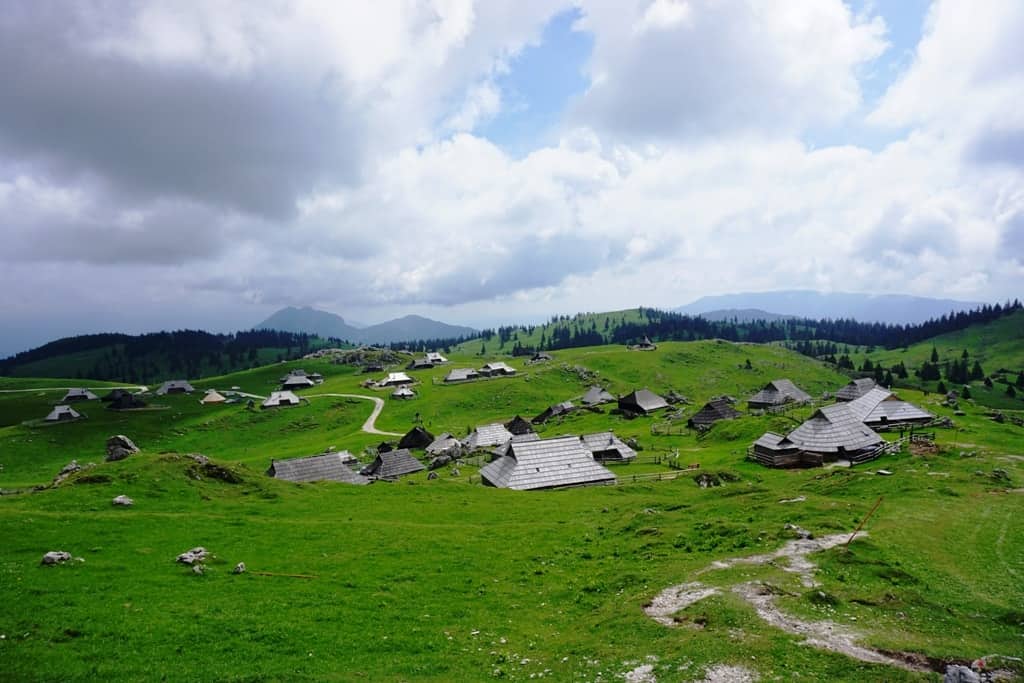 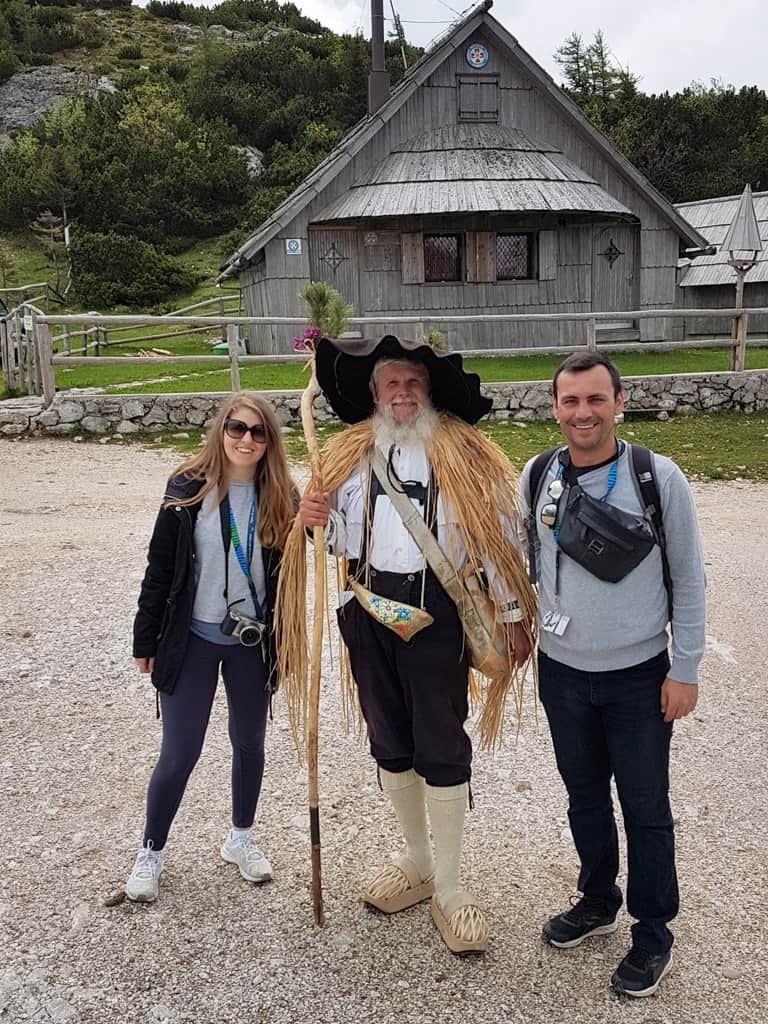 During the afternoon, we hiked to a few other settlements nearby and had an amazing lunch at the Domzale mountain lodge, Zeleni Rob. This tourist settlement also offers lodging and can be arranged for groups. There are two caves near to the settlement, both easily accessed by a hiking trail. We toured these two, named Veternica and Dovja Griča. There are legends surrounding these mountain caves, many of which were invented by the herdsmen.

After our visit to the herdsmen settlement, we went back at the Kamniška Bistrica valley and visited the source of the river Kamniška Bistrica at the Predaselj Gorge. The river rises from three places, but this is the most known major source. The water springs from the moss-grown rocks and then stops for a short period of time in the artificial lake before continuing down to carve out the narrow, deep gorges of Veliki Predaselj and Mali Predaselj. These are the narrowest parts of the river and only located a short walk beyond the lodging house and car park.

Where to stay in Kamnik

There are a few options for excellent lodging in Kamnik, Slovenia. We stayed at the Guest House Repnik, which is located a little ways outside of the main town. It is a guesthouse and restaurant that has always been a coaching inn for travellers. There are just nine rooms here, each with a different them but all with the same luxurious linens and natural, stylish materials. Our room was the forest room, which had a large bed, ensuite bathroom, bio furnace, and large windows over the forest. Other features included dark natural woods and a stacked wood feature behind the bed.

Guest House Repnik serves breakfast in their restaurant. It is comprised of local produce, meats, and cheeses. They also serve lunch and dinner from an a la carte menu as well as specialty dishes. Guest House Repnik is part of the Taste Kamnik program, which highlights the local flavours and producers in the region. We dined at the guest house for both lunch and dinner, in which we partook of the Taste Kamnik menu.

The Taste Kamnik menu includes a local sausage with mustard seeds from a local factory. The mustard made here is so unique that it is also in the Mustard Museum in Middleton, Wisconsin, USA. The second course we tasted was a pasta filled with a local cottage cheese made near Kamnik and local white garlic filling. It was topped with the Trnic hard cheese from the herdsmen on the plateau. The main course was trout from the nearby river, cooked the way it has been prepared for years. Dessert was a local dessert of cream, pastry, and berries. We also got to taste schnapps from a local flower.

For more accommodation, visitors can choose to stay at the Terme Snovik, the eco-resort and thermal baths, or the Slovenia Eco Resort, which is located beneath Velika Planina, in the foothills of the Kamnik Alps.

Kamnik, Slovenia is full of history and is a very unique and interesting place to visit. I highly recommend staying in Kamnik and exploring the surrounding area as an add-on to a trip to Ljubljana.

I was a guest of Ljubljana Tourism and Visit Kamnik but as always opinions are my own.