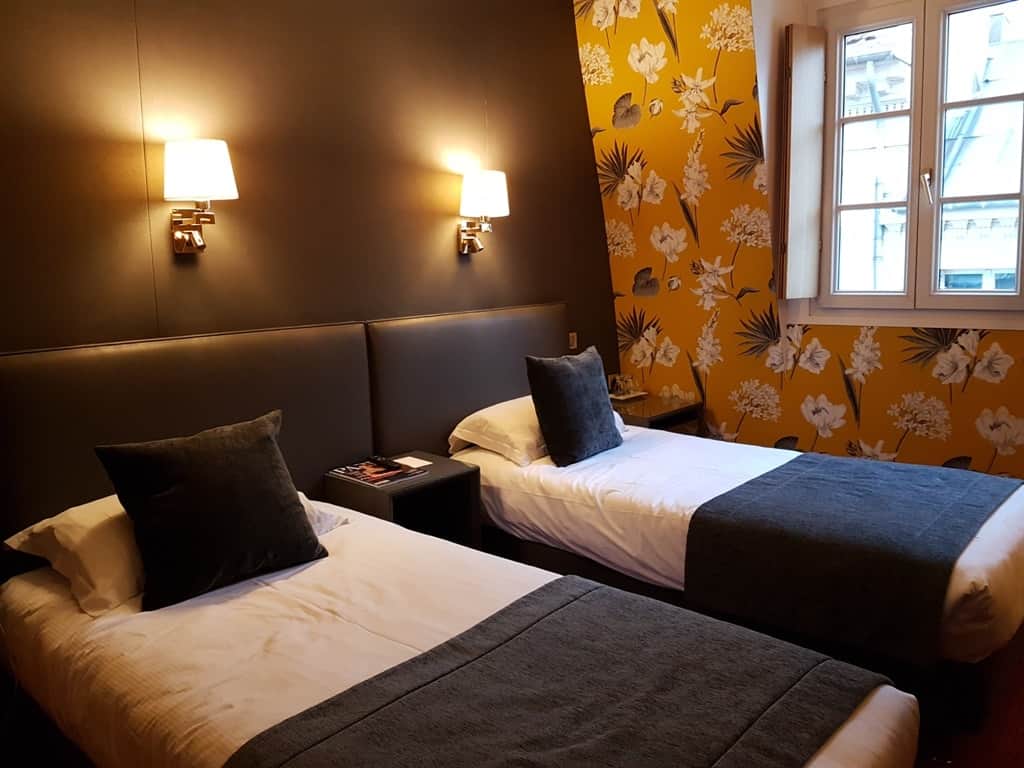 The Hotel Saint Paul Rive Gauche Paris is a beautiful hotel perfectly located between the city’s historic Latin Quarter and Saint Germain. Housed in a 17th-century building near the Sorbonne, Notre Dame de Paris, the Louvre, and the Jardins de Luxembourg, the Hotel Saint Paul is an ideal base for exploring Paris. I recently spent two nights at this elegant property.

This hotel could not enjoy a better location. It is situated on Paris’s Left Bank, on a small side street mere minutes from the famous gardens and a short stroll from the Ile de la Cite. There are a couple of Paris Metro stops close by, which offers easy access to other arrondissements as well as to the airport. From a historical perspective, the hotel’s location is along the outer edge of Philippe Augustine’s Parisian city wall. Front rooms look onto the fascinating Rue Monsieur le Prince, while back rooms have an enviable view of the Lycee St Louis.

This neighbourhood has plenty of cute wine bars, restaurants, and cafes. It is also surrounded by excellent museums, from the Palais de Luxembourg to the Musee de Cluny. The Pantheon is nearby as well.

Check out my 7-day Paris itinerary.

The Hotel Saint Paul Rive Gauche has a long and storied history in Paris. As noted above, it is a 17th century residence and lies along the outer wall of Paris. During the Second World War, it was a refugee shelter. Post-war, the hotel was popular with American expats, many of whom studied at the Sorbonne, and musicians.

We arrived at the Hotel Saint Paul by metro in the morning. It was very early, so we left our luggage at the concierge desk and set out to explore Paris. When we arrived back at the hotel in the afternoon to check-in, our luggage was already in our room. The staff at reception were very warm and welcoming, and we immediately felt at home in this chic boutique hotel.

Rooms at the Hotel Saint Paul

All of the rooms at the Hotel Saint Paul are different, because of its history as the home of the Franciscan monks in the Cordeliers Convent. While the hotel retains its 17th century stone walls, indoor well (now in the breakfast room), and steeply sloping ceilings in some of the upper rooms, it is quite modern and elegant. The floor to ceiling windows feature luxurious curtains as well as privacy blinds. The rooms, at first glance, appear to be wallpapered with lovely colorful flowered wallpaper. However, upon closer review, the walls are actually covered in beautiful silky fabric.

Design-wise, all of the rooms range from vibrant modern to traditional. Artwork at the hotel is eclectic, from portraits of unknown people to whimsical portraits of dogs. In some rooms, the ceilings have thick dark wooden beams across the main ceiling, while in others the beds are set into a small niche with various lighting and wall accents. Our twin room had a starry night ceiling, which I absolutely loved. In fact, I loved our room so much that I asked to see several others since they are all different!

Of the 31 rooms, there are five types of rooms, from a small cozy double room to a family room that sleeps four. The furnishings are elegantly modern and slightly juxtaposed. The chairs, for example, are carved wooden chairs with studded luxurious fabric coverings. They are paired with modern tables and decor. The beds have crisp linen, plush pillows, and heavy woven blankets.

Wifi and international phone calls are complimentary via the Samsung mobile phone that is available in superior rooms and guests can take with them in the city. Wifi is fiber optic, meaning it’s spectacularly fast! Rooms also feature a mini bar, coffee and tea making facilities, and a flat screen satellite television. The bathrooms are recently renovated and feature L’Occitane toiletries and plush bathrobes. During the hot Parisian summers, there is individual air conditioning in each room.

Breakfast was served in the room which houses the well. This well once provided fresh water to the entire neighbourhood! The room feels and looks quite medieval! It has thick stone walls, hand-built arches, and dark wooden furniture.

The Hotel Saint Paul Rive Gauche, in Paris’s 6th arrondissement, is one of the loveliest hotels I’ve stayed at. With its unique design elements, warm and welcoming staff, and ideal location, it is a great place to stay during a trip to Paris and I highly recommend it.

I was a guest at the Hotel Saint-Paul Rive Gauche but as always opinions are my own.