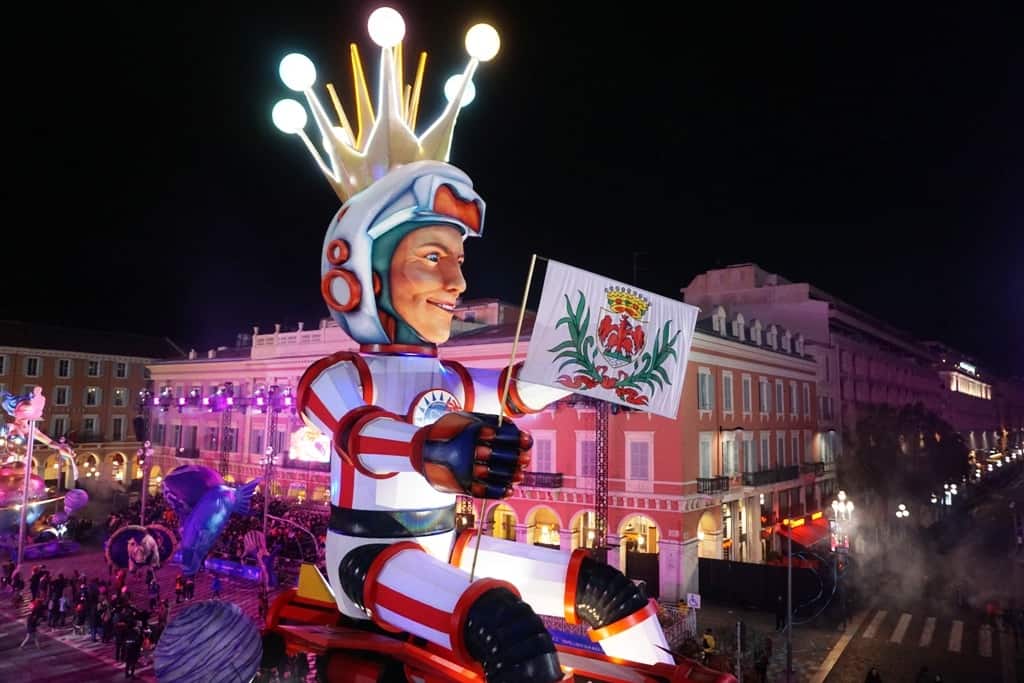 I recently traveled to Nice France to attend the famous Carnaval de Nice, which takes place every year from mid-February to early March. It spans about a two to three week period, usually beginning around Ash Wednesday. The history of Carnival, which occurs in numerous other cities around the world, dates back to the Middle Ages. The most famous, of course, are Venice, Rio de Janeiro, and New Orleans Mardi Gras. However, Nice, which is located on the French Riviera, has one of Europe’s most beloved and oldest carnival celebrations. 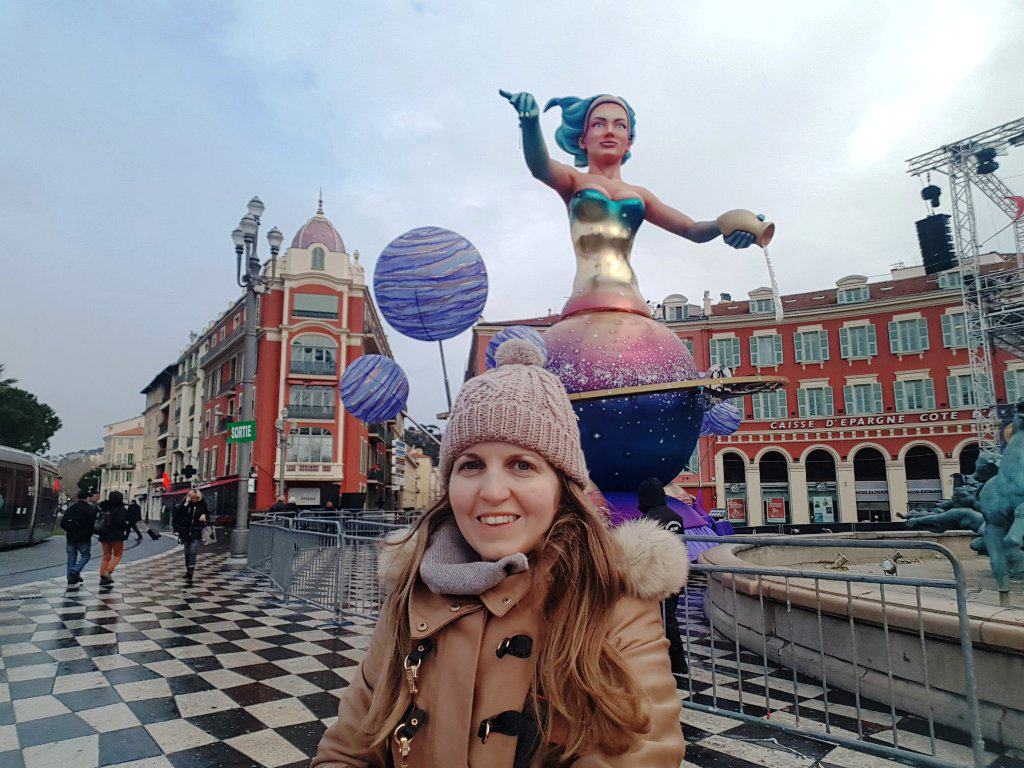 The History of the Carnival

Carnival traditionally celebrates the arrival of spring, as well as the beginning of Lent. Often, in olden times, it was also when the winter food stores began to run out or go bad. The commoners would use Carnival to eat and drink well – and then subsist on meagre portions before their spring produce was available. While Carnival began as a religious event, it grew into something that mocked the ruling classes. Floats typically poke fun at various local, national, or international events. There is also usually excessive consumption of alcohol and meat, wild and crazy activities, and a general thumb at the nose of nobility, rules, and everyday life. 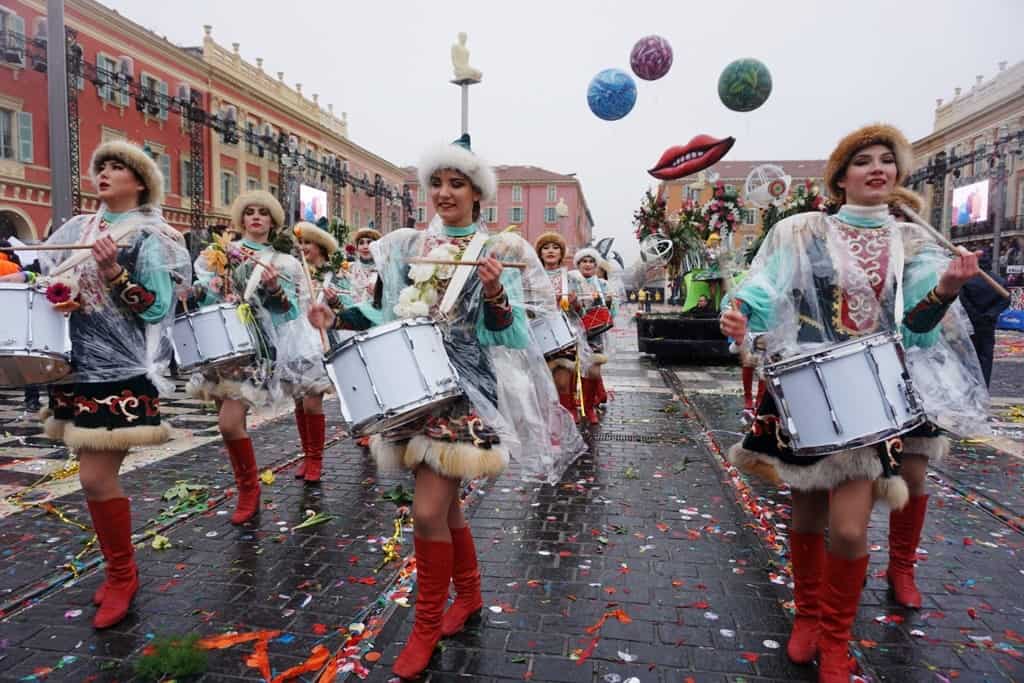 The modern Carnaval de Nice dates back to 1873, when resident Andriot Saetone organised a committee to plan a festival. There is, however, textual evidence that Carnival was celebrated in Nice as early as 1294, by the Count of Provence, Charles Anjou! 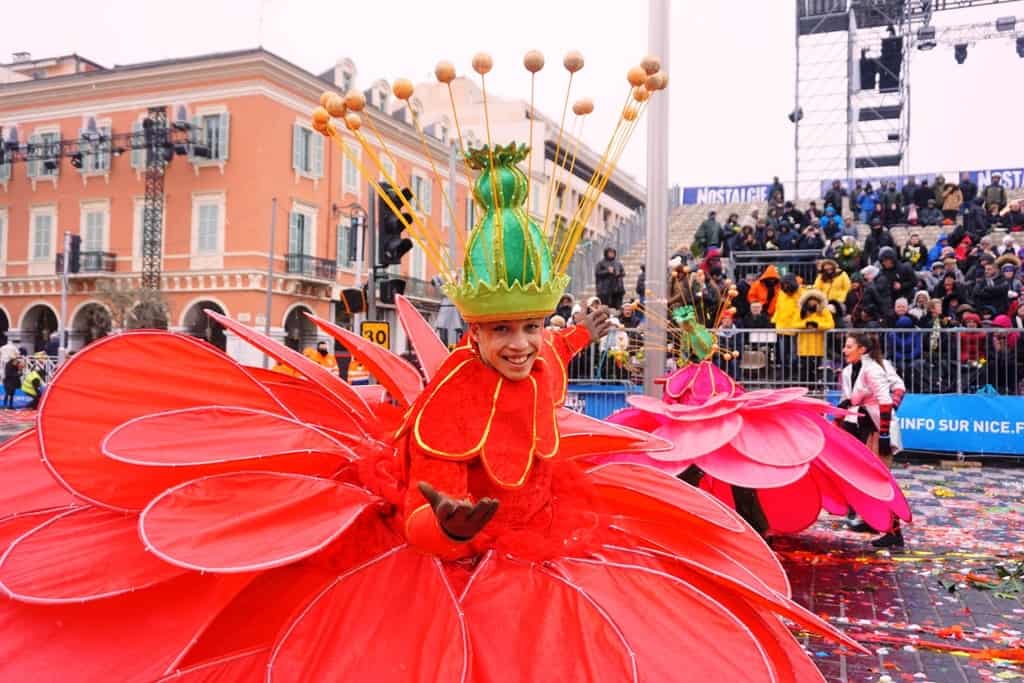 There are two different versions of where the name comes from. The first is that is derives from the Latin carne levare, or “away with meat,” while the second surmises that it comes from a sailing festival heralding the arrival of the sailing season. During Navigium Isidis, or “ship of Isis,” a figure of Isis was paraded through town on a boat. This may perhaps be the origin of the parade floats widely seen today. 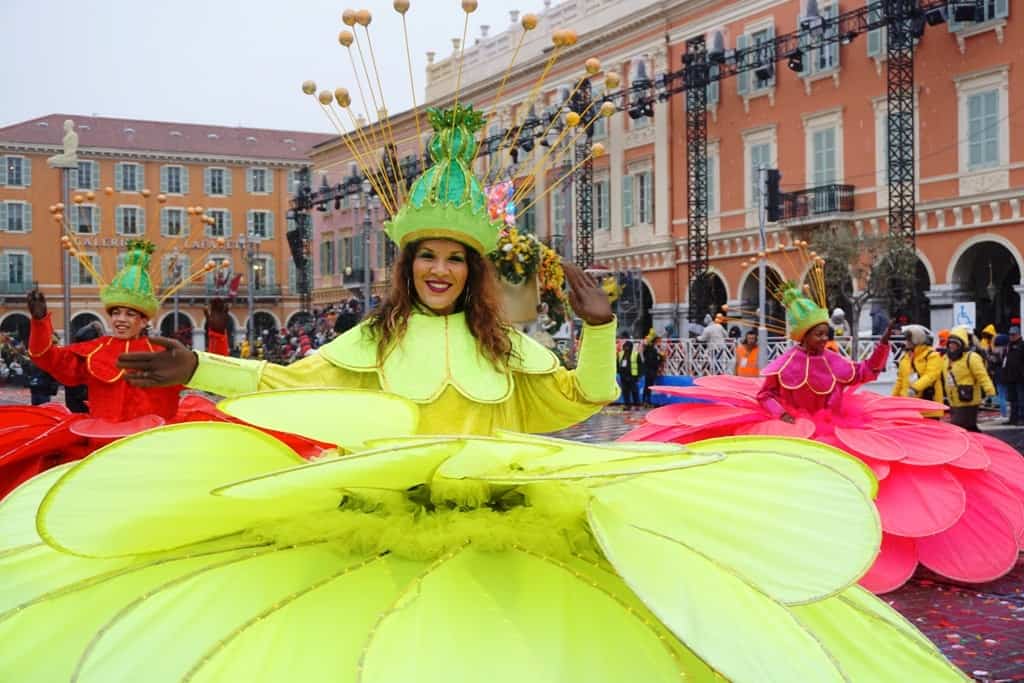 The Carnaval de Nice always has an overlying theme that carries through the entire festival. Floats usually have something to do with the theme, current political events, and other related scenes. This year’s theme was King of Space, and everything had something to do with space, in some way or another. 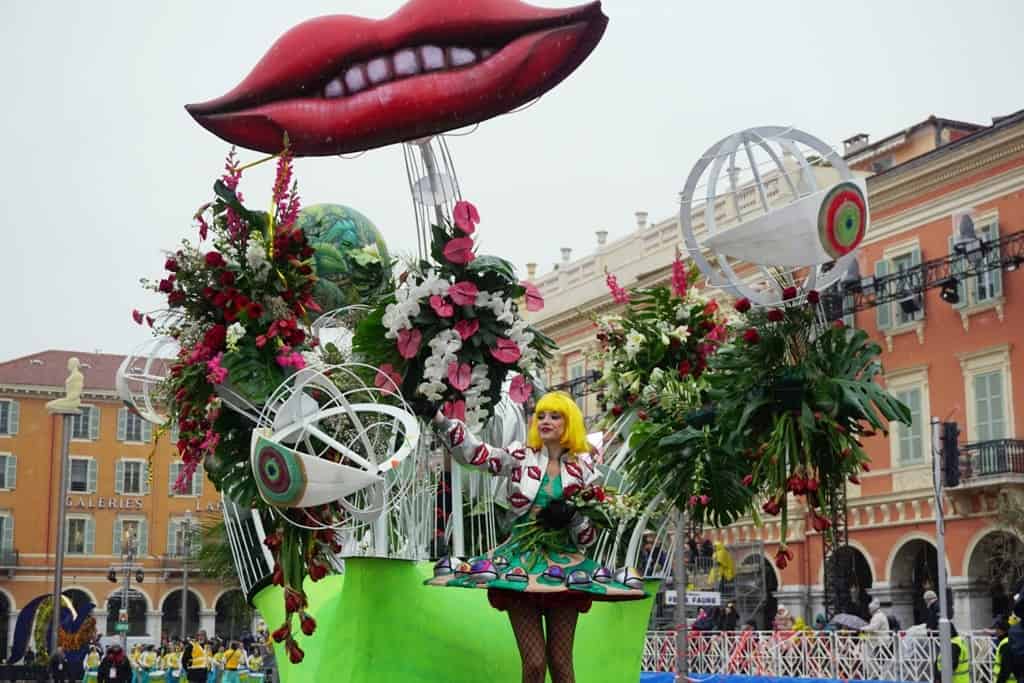 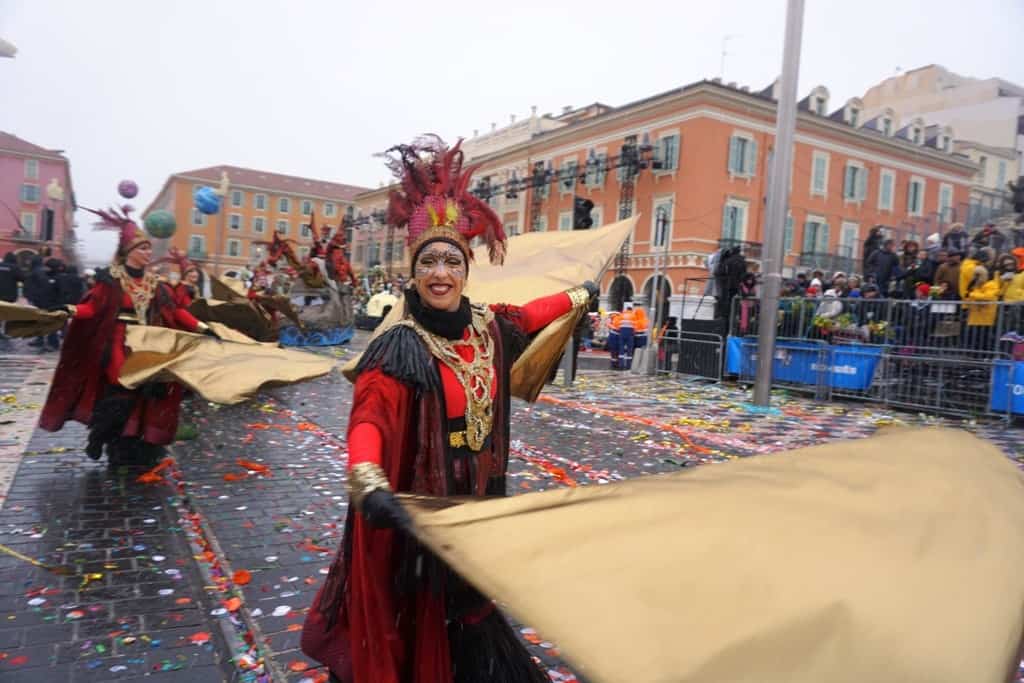 The parades begin at Place Massena and loop around town. Viewers who are lucky to get space in the Messena have the chance to see the full parade from a large screen in the main square.

The Flower Parade, which dates back to 1876, takes place during the day around Place Massena. In this parade, the parade marches take flowers from the floats and pass them to people in the audience. The floats that participate in this parade are the same as the floats from the nighttime parades. They are decked out with thousands of flowers and in the light of day look very different to what they look like at night. 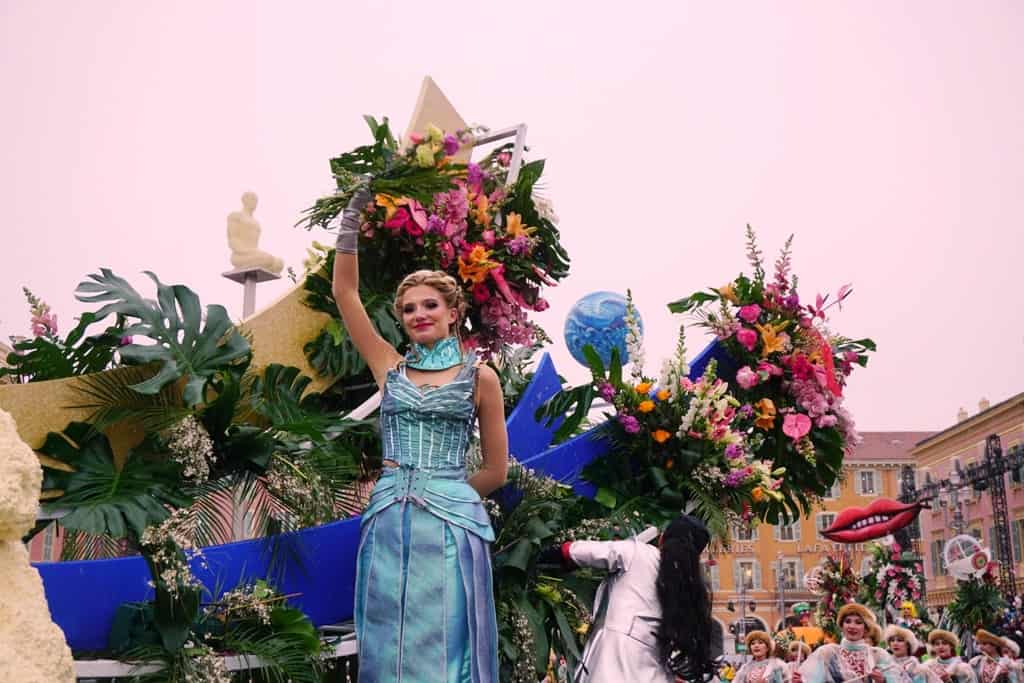 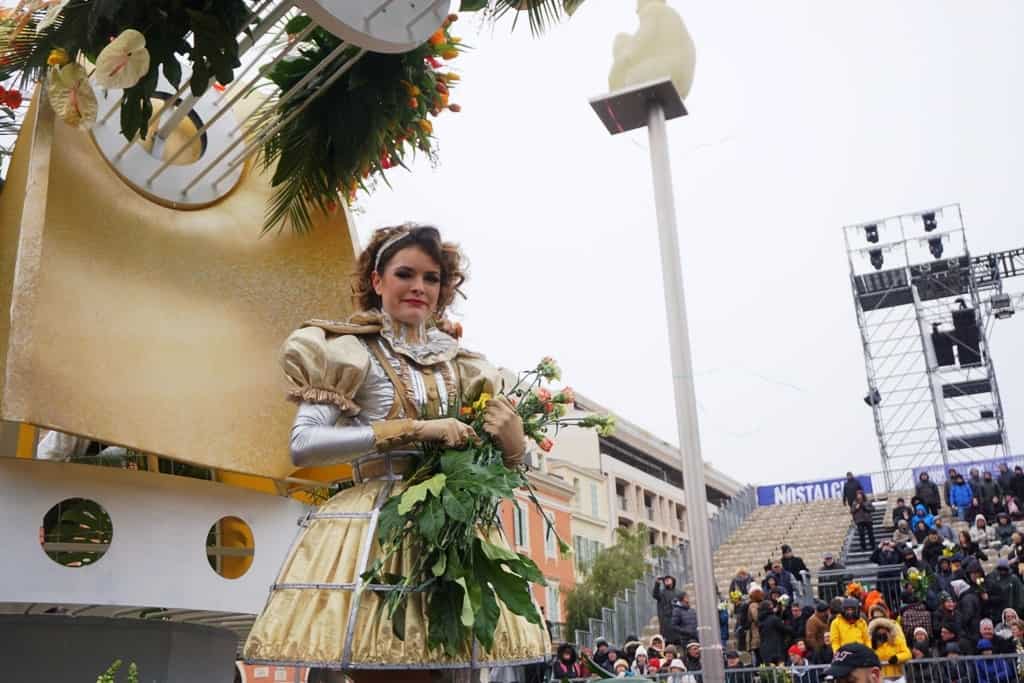 The Parade of Flowers is also called the battle of flowers, because performers throw the flowers to the audience. There is nothing warlike about it though! The Parade of Flowers tradition began when the founder of the modern-day Nice Carnival, Andriot Saetone, thought to give flowers to the audience as tokens of thanks. It caught on, however, and today it showcases the wild array of beautiful flowers that are produced in the Nice region and pays tribute to those who cultivate them. Flower producers from this area account for over 80% of the flowers used in the parade! 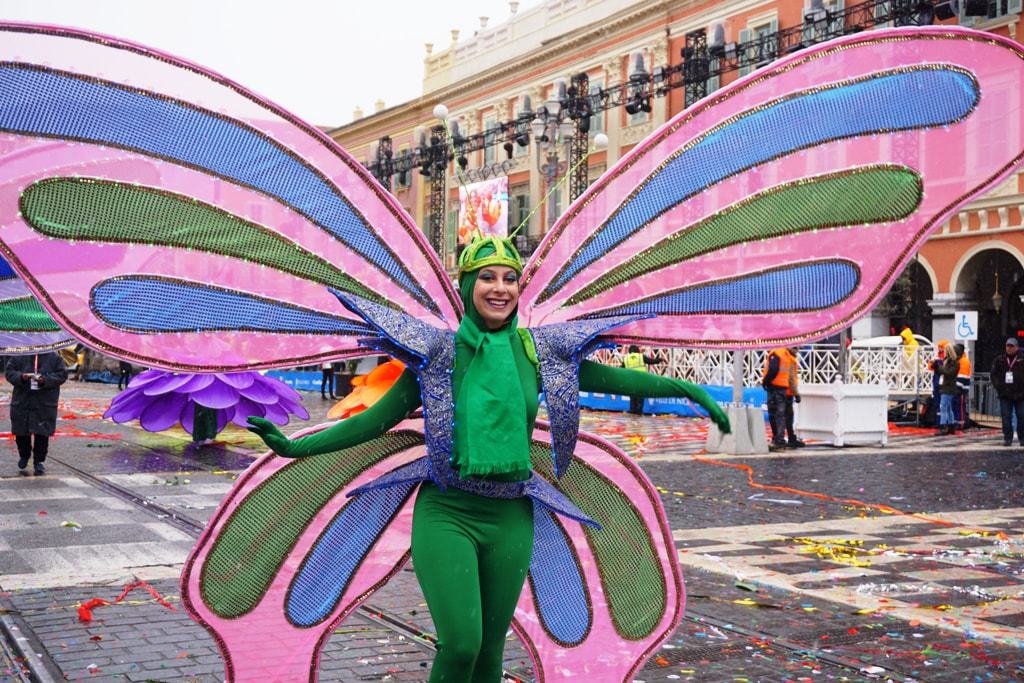 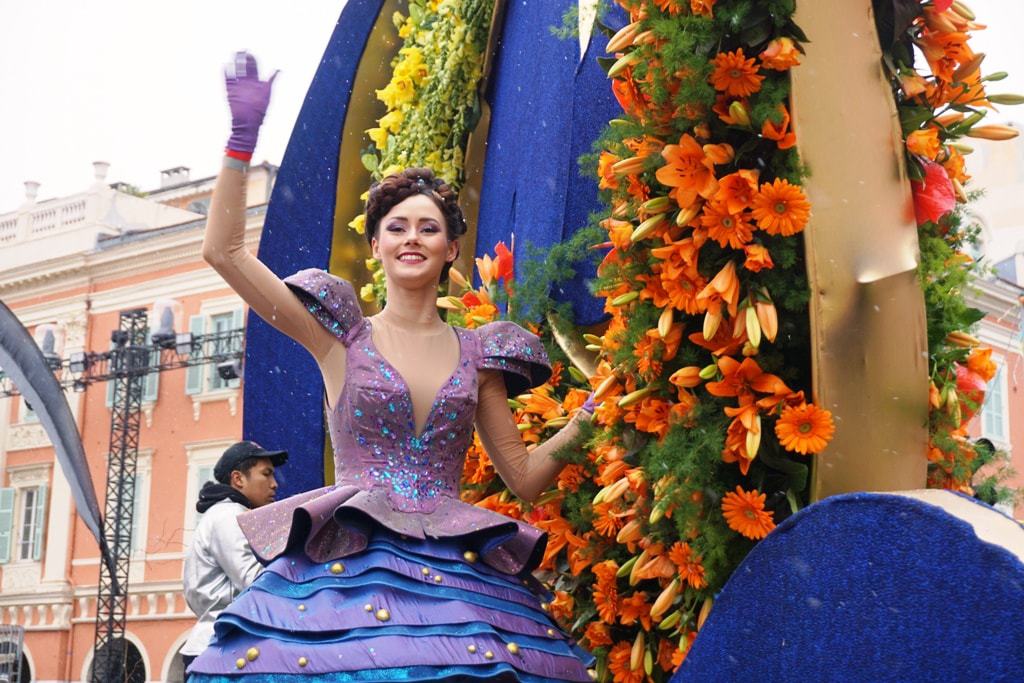 The second parade, the Carnival’s Parade of Lights,  begins after dark and the floats are the stars of the show. The parade goes on well into the night, with a variety of musicians, entertainment, and fireworks, as well as the many incredible floats. 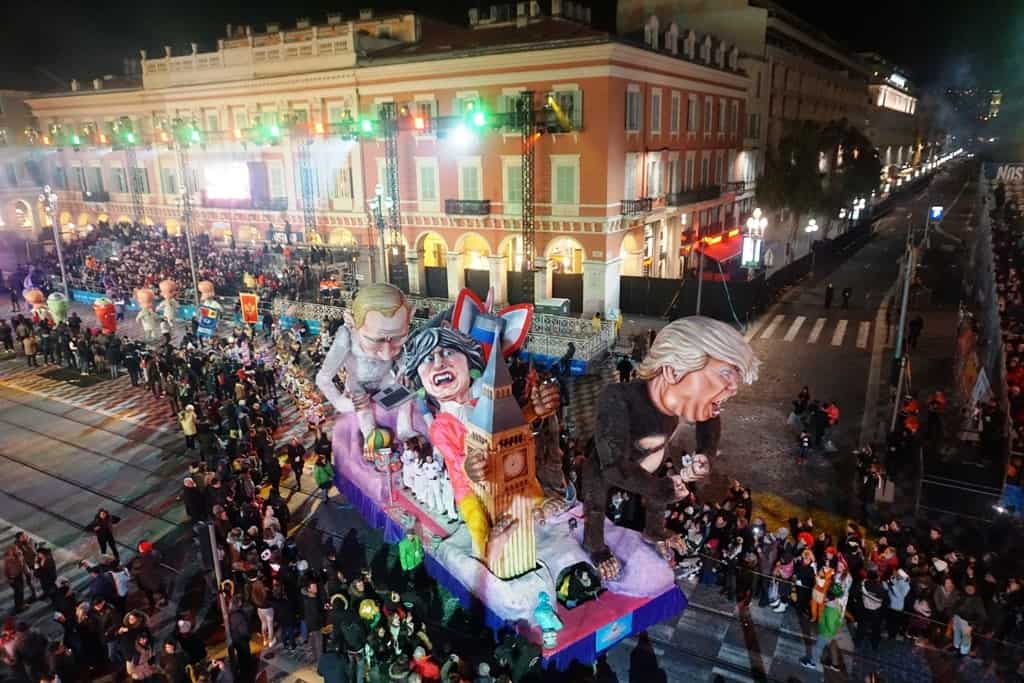 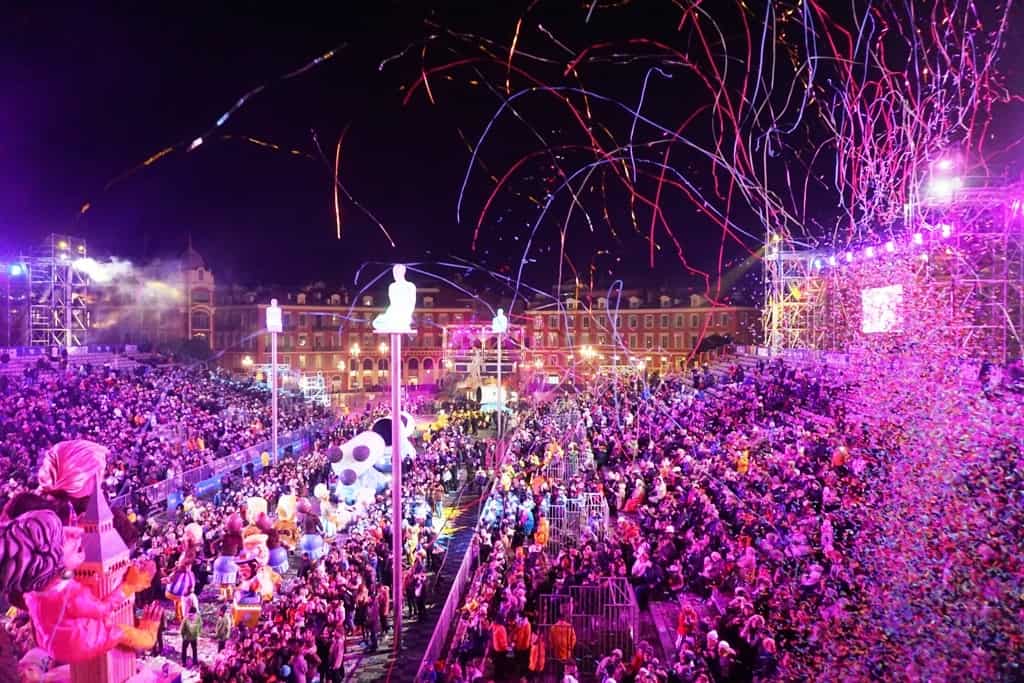 This year, I attended both parades and had a great time at each of them. The parade route begins in the heart of the old city, at Place Messena, and loops around the Jardin Albert 1er, before returning to the Place Messena. There were 17 floats this year, and over 1,000 performers, dancers, musicians, and entertainers. As with any other Carnival celebration, it was entirely extravagant and over the top, which made it so fun! Everywhere I looked, people were dancing, singing, and laughing. During the Flower Parade, almost everyone had flowers from the floats. 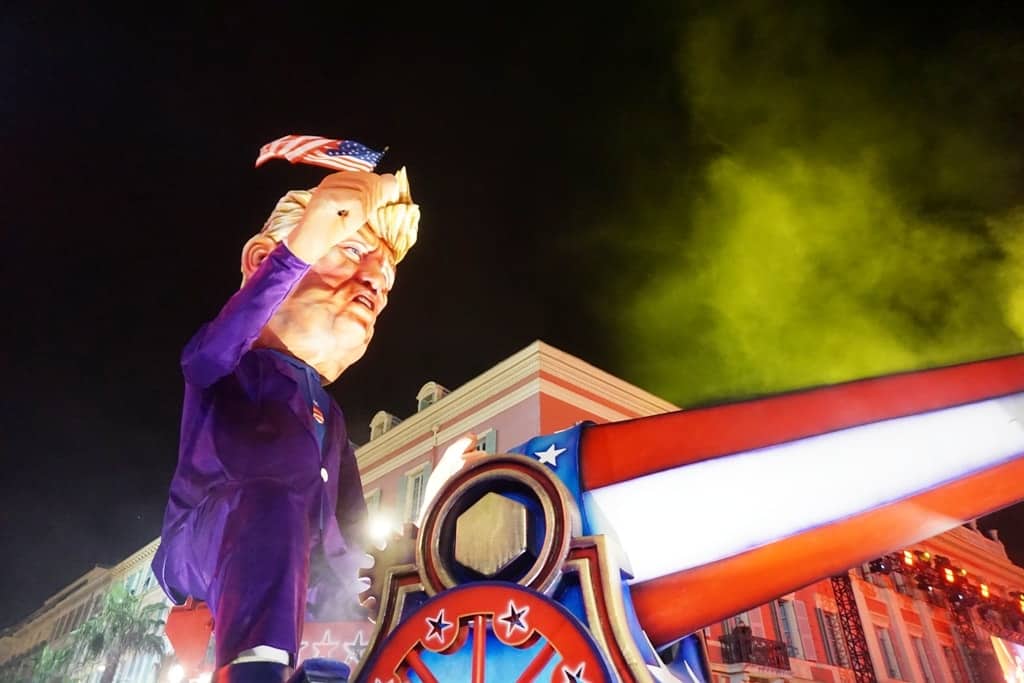 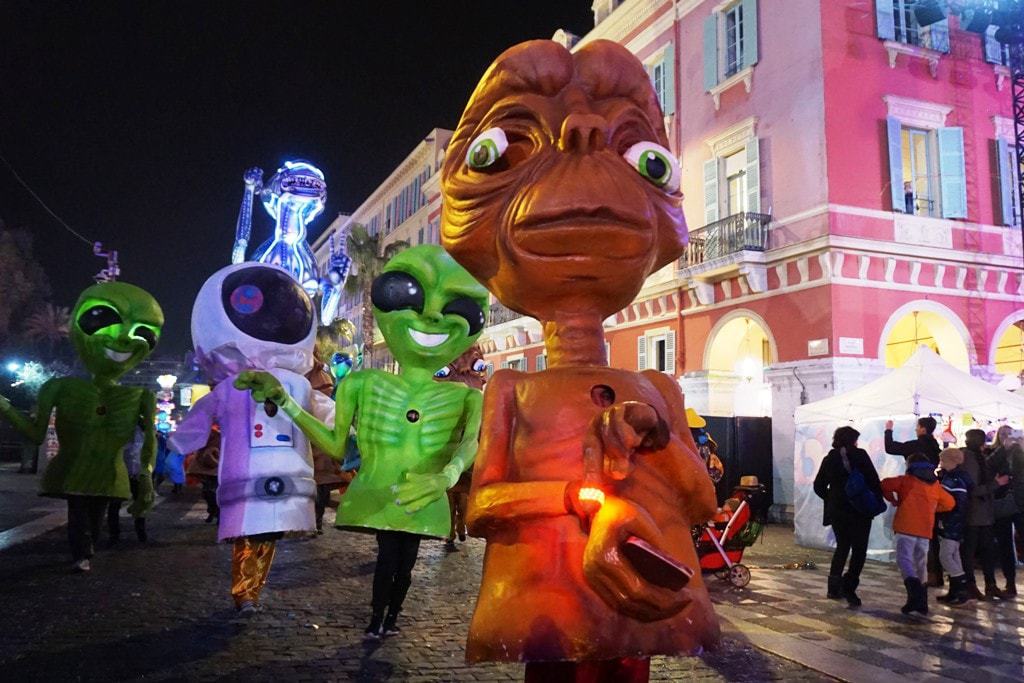 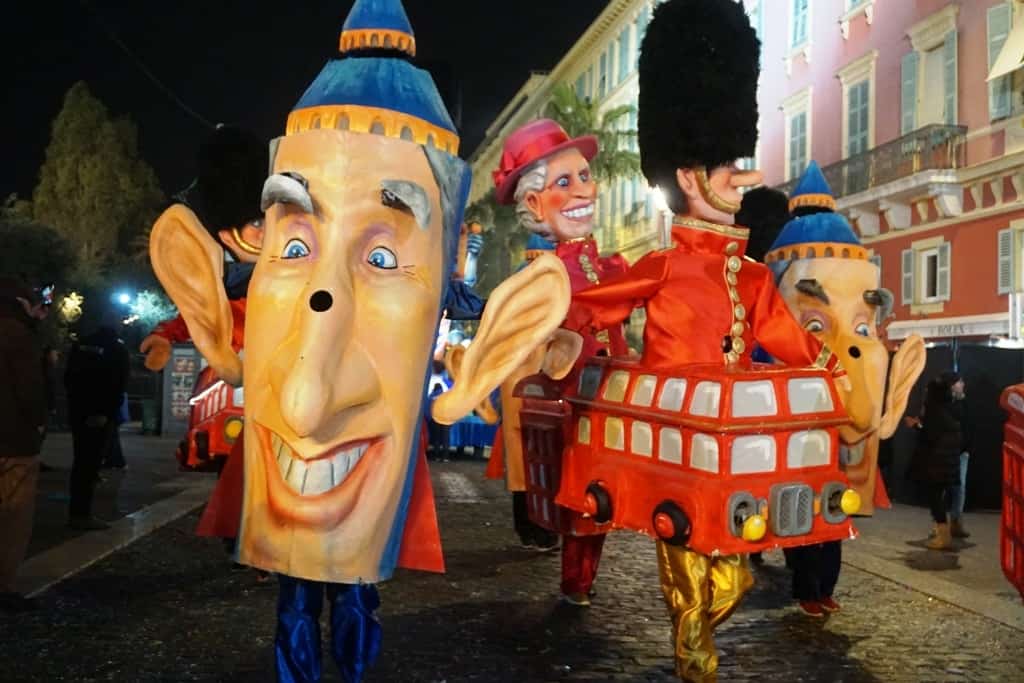 Due to the 2016 attacks in Nice, there are now added security measures at the Carnaval de Nice. Bags are not recommended, as it can add time to your entry into the parade area, although they are not banned. Pets are not allowed at all. For fun, though, anyone wishing to dress up in costume is granted free admission to the standing room only sections of the parade routes. Costumes must be elaborate, wearing a fun hat doesn’t allow you free entry!

Tickets for the Nice Carnival can be purchased online, through their website, or in town.

I was a guest of Nice Tourisme, but all opinions are my own.