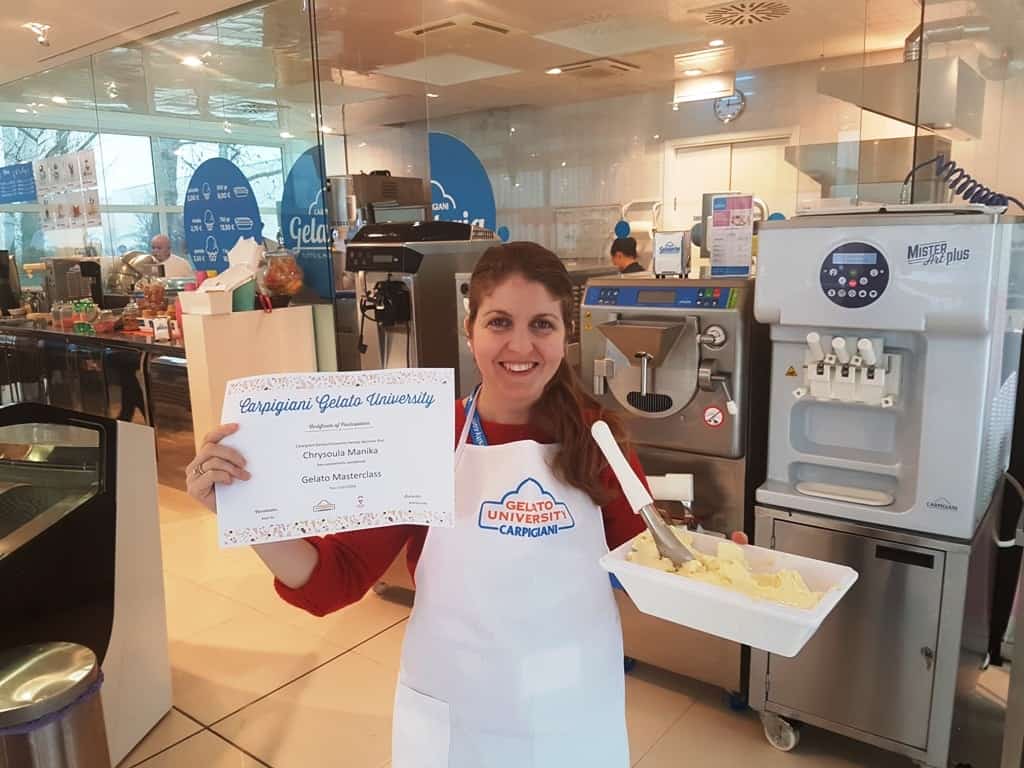 During my recent visit to Bologna, Italy, I had the chance to partake in a class about making gelato. Gelato is Italian ice cream, and it can be found on almost every corner in Italian cities, towns, and villages. It is so popular, in fact, that worldwide gelato sales increased by over $200 million in just five years.

Gelato differs from traditional ice cream in that it uses less cream and more milk. Gelato also typically doesn’t have egg yolks, which is a common ingredient in ice cream. One can tell the difference between gelato and ice cream simply by looking at them; gelato is creamier and has more elasticity than ice cream. Gelato also contains almost 70% less fat than regular ice cream, yet is denser. The lack of fat, the fact that gelato is served warmer than ice cream (by a few degrees), and the density of gelato all combine to increase the flavors that a person tastes when they sample gelato.

And what of gelato flavors? Traditional gelato has more fruity flavors than ice cream does, and a standard gelateria has raspberry, strawberry, and blackberry, although other typical flavors include chocolate hazelnut, pistachio, stracciatella, limone, fico (fig), and cocco (coconut).

Carpigiani is the premier ice cream and gelato machine producer in the world. The main headquarters are located in Bologna, Italy, and are a popular tourist attraction. They also have locations around the world for producing high-quality, professional-grade gelato machines. Carpigiani also has Gelato University, where enterprising entrepreneurs can learn the techniques and skills behind successful gelato. Many go on to open small gelaterias in their home countries. However, guests of the Gelato Museum can sign up for a one-day course in collaboration with the Gelato University to learn the basics (and more) of making gelato. This is what I did.

Before donning my requisite white apron in the classroom, we had a tour of the Gelato Museum. This fascinating exhibition traces the history of gelato, from its early stages in the 17th century to modern-day tinkerings with exotic flavors. Of course, the history of frozen delights goes back more than just 400 years. There is evidence that some of the earliest civilizations like the Romans and the Egyptians created a version of sorbet, using snow and fruit. Later, the Chinese taught Arab traders, who in turn taught Venetians, how to make a version of it. Of course, frozen food was a novelty, and therefore only for the nobility or very rich.

The Sicilians created their own version with sugar. And finally, by the 1600s, Italians were wowing the world with a new thing called gelato. Sicilian entrepreneur Francesco Procopio dei Coltelli was the first to introduce gelato to the rest of the world when he opened a cafe called Cafe Procope in Paris in 1686. His cafe quickly became a literary establishment and still exists to this day.

The Carpigiani Gelato Museum is the only museum in the world dedicated to gelato. As technology improved, and as gelato became more popular, there were new machines that could churn out gallons of gelato at a time. The invention of artificial ice meant that gelato could be sold on the streets as well, and soon after this, the cone was invented! In the late 1900s, modern technology and new healthcare regulations changed the way gelato shops operated. There was also a new focus on artisan creations, like what we see today in local, family-owned gelaterias.

After touring the Gelato Museum, we went into the classroom for our sorbet-making masterclass. We began with creating a recipe, understanding the science behind the specific amounts of the ingredients we needed. Once my recipe was perfected, I gathered my ingredients, which included a fresh pineapple.

I skinned the pineapple first, and then chopped it into fine pieces, and then measured and added the rest of my ingredients to the bowl. A quick mix was all it took to combine the ingredients before I added the mixture to the heavy-duty gelato-making machine. The machine did most of the work before I churned it into the stainless steel pan. At the end of the class, when we were done crafting the gelato, we tasted it. Finally, before leaving, I got my certificate of recognition.

The masterclass that I participated in is not the only class that the Gelato Museum at Carpigiani Gelato University has. There are specifics classes for both students and families, as well as a class for businesses, where employees can challenge each other in the art of gelato making. Tours last anywhere from an hour to a full day and all include a museum tour, gelato tasting, apron and hat, ingredients for the perfect sorbet, and a diploma at the end of it.

The Carpigiani Gelato University attracts budding gelato entrepreneurs from around the world, all of whom come to study the science and techniques that go into gelato making. In addition to learning the craft and building their business, they actively promote the culture of artisan gelato. There are test kitchens onsite for experimentation, competitions to create new flavors, and a cafe where these creations are sold to the public.

How to get here

Carpigiani Gelato University and Museum is located at Carpigiani Headquarters in Bologna, Italy. If driving, enter “Via Magli 1, Anzola dell’Emilia 400111 Bologna” as the destination. It is 3km from the Bologna-Borgo-Panigale exit on A1 and exit 3 off the Bologna bypass.

By train, Bologna is only one hour from Milan and 35 minutes from Florence. From the Bologna Centrale train station, you will need to take bus #87 to the Magli exit, which is direct across from the Carpigiani HQ entrance. Travel time is approximately 35 minutes, and you will need an “extraurbano” ticket.

Lastly, you can take a taxi from the centre of Bologna. The fare is about 20 euros one way.

The best things to do in Bologna

My trip to Bologna was organised by Bologna Welcome but all opinions are my own.