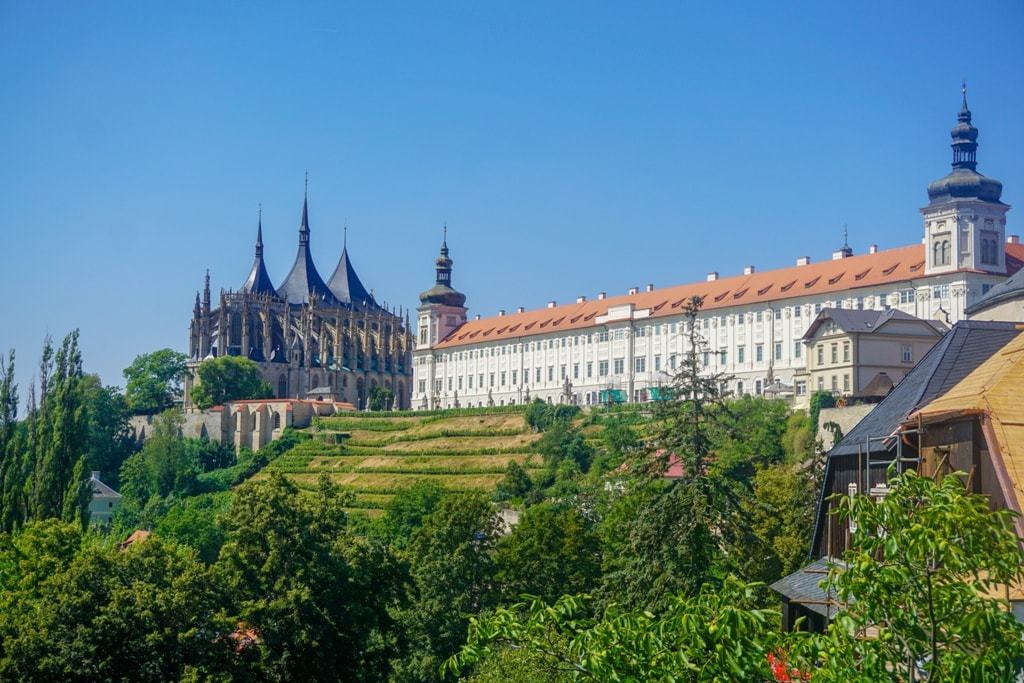 Kutna Hora is a city in Central Bohemia, Czech Republic. It is located about an hour east of Prague. It is most well known for its Gothic cathedral, ossuary, and mining history. It is a UNESCO World Heritage Site for its importance in the growth of the Czech Republic and its architectural gems.

A Complete Guide to Kutna Hora

Kutna Hora began as a monastery town in the mid-12th century, when the Sedlec Abbey was founded here. In the 13th century, German miners began to mine the silver in the mountains on the monastery property. The name Kutna either comes from the German Kutten, for the monks cowls, or kutani, Czech for mine.

In the late 13th century, the Wallachian Court minted the first Prague groschen here, as the city was of the utmost importance to the Bohemian rulers from the 13th to 16th centuries. Under King Wenceslas II, Florentine currency experts came in from Italy to reform the Czech currency minting process.

Kutna Hora – along with the rest of Central Bohemia – passed to the Austrian Habsburgs in the 16th century, and the city declined from there. Several mines flooded, leading to the collapse of the mining industry. By the late 18th century, the mines were in ruins and the town impoverished.

During the 20th century wars, the city passed through various hands, finally becoming part of Czechoslovakia post-World War II, and part of the new Czech Republic following the dissolution of the Soviet states.

How to get to Kutna Hora from Prague

There are a few ways to get to Kutna Hora. If you have a car, it’s an easy hour-long drive from Prague. Trains run regularly from Prague to the main station at Kutna Hora which is 4 km away from the city center From there you can transfer to a local train. There is always one train leaving after the arrival of the train from Prague.

A bus also runs regularly from Prague to Kutna Hora. This takes about an hour and forty minutes and delivers you right into the city centre.

8 Things to Do in Kutna Hora

Kutna Hora is well known for its incredible Saint Barbara’s Church, located in the heart of the old town. Saint Barbara is the patron saint of miners, making her the obvious choice as patron of the local cathedral. The church, with its exceptional flying buttresses and three-tented roof, is one of the most important Central European Gothic cathedrals and certainly one of the most unique.

It was founded in the 1380s by the mine owners, who wished to assert their independence from the local Sedlec Monastery and, perhaps, to rival the famous St Vitus’s Cathedral in Prague. The interior stained glass reflects the industrial core of the town, with miners, minting techniques, and the miner’s coat of arms adorning many of the windows.

The Church of the Assumption of Our Lady and Saint John the Baptist is located within the Sedlec Monastery complex along with the Ossuary. The cathedral was built in the late 13th, early 14th centuries and is a mixture of French Gothic and Germanic architectural styles. Following the 15th century Hussite invasion, the cathedral was in ruins.

The Cistercian order called for the cathedral to be restored and reconstructed in the 17th and 18th centuries, during which time the architect added several unique features. Jan Blažej Santini-Aichel added some Baroque-Gothic elements and incorporated a cantilever staircase and what is known today as a Bohemian flat-vault. The church is a working Roman Catholic church. It houses an extensive art collection as well as the world’s oldest preserved Gothic monstrance used for Catholic adoration.

Also known as the Roman Catholic Cemetery Church of All Saints with the Ossuary, the Sedlec Ossuary makes up the remainder of the former Cistercian monastery complex with the above Church of the Assumption of Our Lady and Saint John the Baptist. It is a two-story charnel-type building built in the 14th century.

In the early 15th century, the order built a Gothic church in the middle of the cemetery, adding a lower chapel to be used as an ossuary. By the 16th century, the task of exhuming the skeletons and making sense of the piles of unearthed bones was being undertaken by a blind monk.

The result of what we see today, though, came about in the 18th century when the royal family hired a woodcarver to put the remaining piles of bones in order. The Sedlec Ossuary is one of the most popular visitor attractions in the Czech Republic.

The Italian Court is the former royal palace and royal mint. The original building, a 13th-century fortress, was adapted to the minting industry by King Wenceslas II in the 14th century, but it was Wenceslas IV who adapted it further to suit the needs of a royal residence.

The minting reform in the 13th century included closing various other mints around the country and bringing in Florentine currency experts who helped the king create the new Prague groschen, the strongest currency in Europe at the time. Several important Czech political events took place here over the centuries, namely the Decree of Kutna Hora until the kingdom declined.

A restoration in the late 19th century restored the Italian Court to its former glory. Today, the Italian Court is the city hall and government administrative center. Visitors can take two different tours, one that highlights the minting process and the silver mining industry in Kutna Hora and one that follows the path of the royal family.

The Gothic Stone Fountain lies in the centre of Rejsek Square, on the western side of the old town. It was created in the late 15th century as a solution to the lack of drinking water in Kutna Hora, which occurred because of the disruptive and invasive mining activity in the region. The solution was to pipe water in from a nearby spring to the fountain, where residents could access clean drinking water. The structure was originally roofed, although its not today, and supplied water to the city until the 1890s.

The Chocolate Museum is tiny and quaint, but well worth a visit even if you don’t like chocolate. According to the story, the chocolatier behind the internationally successful Lidka brand refused to give the Communists his secret chocolate recipe, and instead fled the country. Locals tried to replicate his chocolate without success, and the shop and factory folded in 1993.

The museum houses some of the molds and chocolate-making tools. However, there is now a new chocolate shop working on the premises, so in addition to learning the story of the original brand and seeing its tools, you can also watch the chocolate-making process and try some for yourself.

Czech Museum of Silver and Medieval Silver Mine

The Czech Museum of Silver, Medieval Silver Mine is located at Hradek, or Little Castle (which is not so little), and offers a unique glimpse into the once-rich industry of Kutna Hora. The castle was built in the 13th century as a small fortress, enlarged by the royal magistrate in the 15th century. It was damaged during the Hussite War, but was restored (and enlarged again) in the 17th century.

Hradek is the site of the former Kutna Hora Jesuit seminary, which dissolved in the late 18th century. A mining museum opened here in the 1950s but closed in the 1970s. By the 1990s, it was under restoration and finally reopened in 1996. The museum is one of the most complete collections of mining artefacts and archaeological and numismatic finds, and art and geological collections as well.

There are two tours possible here. The first traces the history and development of Kutna Hora as the centre of the mining industry in Central Europe (“Silver City”, while the second looks predominantly at the mining process itself (“The Journey of Silver”).

We did the second tour, the one that took us underground into the old tunnels. We learned about the mining methods in the Middle Ages, the process of mining, and the minting techniques, before going through one of the old sections of the mine. Upon returning to the surface, we explored a replica of the miners’ village.

Get lost in the alleyways of Kutna Hora

Like most other old towns in Central and Western Europe, Kutna Hora’s historic centre shouldn’t be overlooked. The lovely cobblestone streets wind through the old town, while the colourful buildings house charming pubs and restaurants as well as residential homes. On a warm, sunny day, tables and chairs spill from the pubs onto the streets; don’t miss exploring the alleyways of Kutna Hora!

Where to Eat in Kutna Hora

We had lunch at the Restaurace V Ruthardce, located near the Tower of St James in the old town. It is considered one of the best restaurants in Kutna Hora, and there’s definitely an emphasis on great food made with love. We sat in the garden, a shady space with long communal tables and smaller, more intimate tables under the trees. The interior of the restaurant is classic and old, with a large fireplace and heavy wooden tables. The food here is delicious, and very clearly the owners care about making the entire experience wonderful. I had the fresh fish, which was tasty. The drinks menu includes Czech beer or soft drinks. Prices are reasonable, and this is a great place for lunch or dinner.

We had dinner at Factory, a cafe bistro bar located in the center of town. It is a popular pizza, pasta, and burger bar. I had a really great burger, which came with thick, crispy chips and a small side coleslaw. They also serve Neapolitan-style pizza (thin, crispy crust), and al dente pasta. The factory is a great choice for an easy, inexpensive, delicious lunch or dinner.

Where to Stay in Kutna Hora

We spent the night at Hotel Mědínek Old Town, a 52-room hotel perfect for travellers, families, or businesspeople. The rooms are spacious and well-appointed with comfortable furnishings and views of the city centre.

Kutna Hora is a great addition to a Czech Republic itinerary. It makes a wonderful day trip from Prague, or a good place to overnight and explore some of the surrounding Central Bohemia region. I recommend travelling here to learn more about its unique heritage and interesting architecture!

Travel Passionate was a guest of Czech Tourism and the Central Bohemia Tourism Board on this trip, but as always opinions are my own.

4 thoughts on “Things to do in Kutna Hora, Czech Republic”