Iconic Greek churches & monasteries await each visitor who is intrigued by cultural history. Greece, a highly spiritual place, is charged with a transient energy that has pervaded its lands and seas since the beginning of antiquity. Before Christianity was instigated, Ancient Greece had a Pantheon of 12 Olympian Gods who were highly revered by the ‘mortals’. Temples and shrines were built throughout its enclave giving the people places of worship and prayer, a behaviour that has not changed fundamentally, as the centuries progressed. Spirituality gave way to more conventional religion, and although Greek religion may have changed in the course of its expansive cultural history, the strength of the Greek faith is undiminished still, especially among the older generations. The Christian Orthodox religious rites and rituals are up kept fastidiously, although the youth partake mostly on the festive occasions.

Following the chronological order of development, we must first look at the spiritual sites of Ancient Greece. Some found on mainland destinations while others on islands, the below mentioned all belong to the list of Greek UNESCO World Heritage Sites, and justifiably so.

One of the more important, if not the most important site of Ancient Greece, the Delphi site consisted of various auxiliary structures that date back to earlier than 6th century BC. Located about 2 hours drive from Athens, near Mount. Parnassus and the popular mountain village of Arachova, Delphi continues to amaze its visitors. The Sanctuary of Athena Pronoia and the Tholos that still stand today, together with the Stoa of the Athenians, the Treasuries of Athens, and the impressive Temple of Apollo, as well as an amphitheatrical theatre, gymnasium, stadium and even hippodrome. The belief that it was the centre of the Earth, represents the immaculate energy of its poignant location. The ancient myth goes that the God Apollo slayed the serpent dragon that protected the sacred place. Hence the ancient Greeks erected a temple in his honour. Subsequently, the Delphi oracle was created, with its high priestess Pythia becoming the most powerful woman in the classical world. Her prophecies were binding pieces of advice, followed almost dogmatically by generals and leaders.

In Thessaly, central Greece, surrounded by the Pindus mountains, you will find Meteora, a unique, rock formation of boulders upon the peaks of which, Eastern Orthodox monasteries have been built. At first glance they inspire awe, as the elevated and rounded natural pillars seem particularly challenging for constructing anything that is inhabitable upon them. And yet, there they are. These architectural marvels amidst the immensity of the natural beauty that surrounds, will absolutely astonish you. You will immediately realise why this place was chosen as a monastic site; it would seem that God here, is everywhere and everywhen. Reaching Meteora by rail from Athens proves an incredibly scenic ride, as the train takes you on a route through natural landscapes that are far from the main roads. Combining both the above excursions can prove efficient with a two day Delphi and Meteora tour from Athens.

Check out my guide to the Meteora Monasteries. 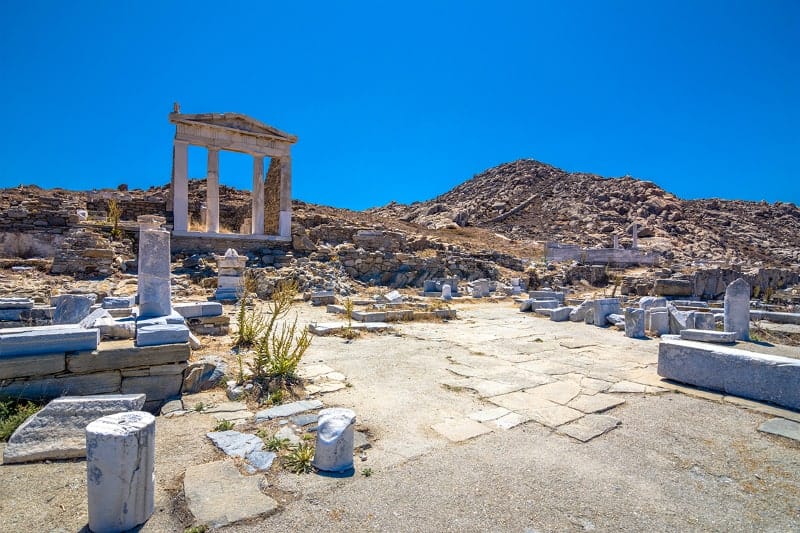 The sublime energy of Delos island

Also connected to Apollo, Delos island, in the heart of the Cycladic archipelago, has been considered a sacred location where human dwelling never properly took place. Speculated of being the birthplace of Apollo and Artemis, the divine twins of Titaness Leto and Zeus, Delos was where their mother hid them from Hera’s jealous wrath. An island to be used exclusively for worshiping the Gods, visiting Delos by cruise will reveal remnants of the following: a theatre, the Terrace of Lions, Temples of Delians, Isis and Hera, and the different Houses of Dionysos, Trident, Cleopatra and Mosaics. Essentially, Delos island was a cult centre for the worship of a number of deities.

Iconic Greek churches around the islands:

Apart from its ancient heritage, Greece also has a large part of its history that revolves around a different kind of faith. As the Pantheon gave way to Byzantium and Christianity, a plethora of iconic Greek churches & monasteries were erected. Having survived relentless wear and tear, they stand proudly till this day, in silence, reminding us of the generations that so fervently clinged to the notion of God, seeking his absolution or as purpose in life.

An Ionian island that drew much of the Venetians’ attention is now one of Greece’s most aristocratic ones. As most other Greek islands, it has a fair amount of churches and monasteries, however, here are some that stand out. The island’s patron saint, Spyridon, has a homonymous church in the old town that is recognisable by its red bell tower. It has become a trademark of the old town, together with other landmarks such as the Venetian Fortresses and Palaces. Of course, another iconic church of Corfu is that of Vlacherna on Mouse island. There are two Byzantine monasteries worth checking out, the Monastery of the Blessed Virgin Mary which lies in ruins, as original as can be, and the Paleokastritsa Monastery built in the 13th century, while the part that is frequented by visitors has been restored to its former glory. One lesser known church that is hidden between the villages of Vatos and Pelekas, is that of Myrtidiotissa, with an impressive throne room. With an amazing, off the beaten track beach as a backdrop, visitors can reach it fairly easily from Mayor Pelekas Monastery.

Check out the best things to do in Corfu.

If you have not been to Folegandros island, put it on your bucket list to visit as soon as possible, for a number of reasons. One of which is a most impressive church built atop of a dramatic, triangular mountain with a zig-zag, stark white path leading up to its entrance. The Church of the Virgin Mary is a sight to behold from afar; a true landmark of Folegandros. It is only a few minutes drive from Karavostasis, where you can enjoy 5 star luxury accommodation in Folegandros. For spending a romantic evening gazing into the sunset kissed panorama vista of sea meets sky, head north west, over to St. Panteleimon chapel that boasts one of the islands most incredible vantage points.

When putting Greek islands and churches in one sentence, the mind instantly drifts to Santorini. With over 250 churches dispersed throughout its clifftop settlements, here are some that are a bit more elusive, that may have escaped your radar. They are located in the Akrotiri area where you will also find Santorini luxury suites gazing upon magical vistas, almost opposite the buzzing settlements of Fira and Oia. Four beautiful churches have a permanent home here, St. Epifanios traditional Orthodox church, St. Eleftherios, St. Ioannis Prodromos and Theoskepasti churches.

Check out the best things to do in Santorini.

Nowadays, the youth has lost touch with the religion aspect of faith, as there is a global tendency to adopt more atheist beliefs fueled by the rapid advancement of science and the dependence we have on technology in our everyday lives. Perhaps engaging more and more people to discover these mystic places, these iconic Greek churches & monasteries, regardless of faith and religious views, will spark the flame for greater appreciation among the younger folk, who are will be handing down the beacon of world heritage to their ancestors.