Istanbul, the city between two continents, the crossroads of the ancient world, and one of modern civilisation’s largest cities. Known for its skyline dotted with glittering minarets, Istanbul attracts lovers of art, architecture, and history. Others visit for the bustling markets, the traditional hammams, and the vast array of food, arak, wine, and spices. No matter the reason, Istanbul captivates everyone. Its culture, so intertwined with its religion and its incredible history, shines through in the details found in even the tiniest corners of the smallest mosques.

The most important thing I wanted to learn during my recent visit to Istanbul was the fundamentals of Islamic architecture. I also wanted to tour some of the important mosques. So I did a tour with Context Travel, a company whose tour focus is on small groups with guides (“docents”) who are educated in that particular field of study. The tour, Ottoman Architecture: Istanbul’s Magnificent Mosques, was the best way to deep dive into the unique cultural, architectural, and religious significance of these extraordinary buildings.

The Ottoman Empire and The Rise of Islam

At its peak in the 16th century, the Ottoman Empire controlled much of the Mediterranean, eastern Europe, the Persian Gulf, and parts of Northern Africa. Founded in the early 1200s by Osman I, the empire grew steadily, first conquering Bursa and Anatolia, then Thessaloniki and Kosovo. The conquest of Constantinople, which was the capital of the Byzantine Empire and the capital of Christianity, cemented the Ottoman Empire in world history.

By the 17th century, Western Europe had begun to push back at the Ottoman Empire, and by the 18th century, the predominant foes were the Austrian Empire (the Habsburgs) and the Russian Empire, who joined forces under Catherine I (Peter the Great’s wife) to defeat the Ottomans. The empire survived until 1922, when it was dissolved under the Turkish national movement and the Sultan banished from Turkey.

Mimar Sinan is considered one of the greatest architects in the classical period of the Ottoman Empire – if not the Empire across history. A contemporary of Leonardo da Vinci (1500s), Sinan rose to fame as a military engineer and commander. He designed over 300 structures in the Ottoman Empire, including Suleymaniye Mosque in Istanbul and Selimiye Mosque in Edirne, Turkey. Sinan’s fame, though, stems from his innovative work that gradually changed the course of Ottoman architecture.

Mosques are the most important building in the Islamic faith. The layout of a mosque depends on where it is in the world. Muslims pray facing Mecca, the centre of their religion, so there must be a mihrab, or a niche, in the wall that indicates the direction of Mecca, called the qibla wall.

Most mosques around the world have a large interior prayer room adjacent to a courtyard, where one finds fountains for cleansing. This space typically is large enough to hold the entire male population for Friday noon prayers. Women have a separate space.

The most common style of a mosque is the hypostyle mosque, modelled after the Prophet Muhammed’s home in Medina. Mosques also have a minaret, a tower outside of the mosque from which the call to prayer is announced.

Minarets also serve as a visual reminder of the faith, as they can often be seen from a distance in the city’s skyline. Many mosques have at least one dome, although they are not required to. If just one, the dome is over the qibla wall. Mosques in the Ottoman Empire differ from mosques across the rest of the Islamic world because they were heavily influenced by the Byzantine churches, like Hagia Sophia, and thus feature a high central dome over the communal space.

Istanbul has a number of imperial mosques, which were commissioned by or built for members of the Ottoman royal family. Some were placed away from the city to take advantage of Istanbul’s topography (seven hills, like Rome), like the Ortaköy Mosque, which is set dramatically on the shores of the Bosphorus. Others are within the city. The most famous Imperial mosques are Suleymaniye, Sultanahmet (Blue Mosque), and Yeni Valide, among others.

1. Şehzade Camii (visited on the tour)

The first mosque that I visited on the tour was Şehzade Camii. In Turkish, camii means “mosque” and is pronounced “jami.” Şehzade Camii is located in Fatih, on the third hill of Istanbul, and was commissioned by Suleiman the Magnificent, in honour of his son.

It was not the first mosque designed by Mimar Sinan, but it is considered his first masterpiece mosque. Built in the 1540s, the mosque was a memorial to Şehzade Mehmet, the son who would have succeeded Suleiman. The mosque complex, or kulliye, also consists of two schools (medrese), a caravanserai (roadside inn), and a public kitchen.

Suleymaniye Camii is another mosque commissioned by Suleiman the Magnificent and designed by Mimar Sinan. Both are buried within the complex. Like Şehzade, Suleymaniye Camii is located on the third hill of Istanbul and can be seen from various points across the city. We visited Suleymaniye Mosque on the second half of our Context tour.

Suleymaniye is the largest Ottoman-era mosque in Istanbul, and like Şehzade Camii, is part of a complex. The kulliye has schools, a hospital, a public kitchen, and a hammam, among other buildings.

The design of the mosque belies Suleiman’s self-importance as well as his historical significance. He believed himself to be the second Solomon, so there are references to the Dome of the Rock (Jerusalem), which was built on the temple of Solomon, and it recalls Justinian’s boast upon completion of the Hagia Sophia, “Solomon I have surpassed thee.”

With the knowledge gained from this tour I visited two more mosques, the famous Blue Mosque and Dolmabahçe Mosque, which is next to Dolmbahçe Palace. I highly recommend visiting both on your trip to Istanbul.

The Blue Mosque is located near Topkapi Palace, in the old part of Istanbul. It is formally known as Sultanahmet after Sultan Ahmed, who commissioned the mosque, but is known as the Blue Mosque because of its blue tiled interior.

The mosque was built in the early 17th century, following a devastating loss to the Persians. Sultan Ahmed felt this would reassert Ottoman power and paid for the mosque from the treasury rather than the spoils of war. It was the first imperial mosque built in nearly 40 years. The architect, one of Mimar Sinan’s students, went for grandeur and size – the Blue Mosque is one of the largest in Istanbul, with five main domes, eight secondary domes, and six minarets. Its design fulfills two centuries of Ottoman mosque design, pulling elements from both Byzantine christian architecture and Islamic art.

Pope Benedict visited the Blue Mosque during a visit to Istanbul in 2006.

Dolmabahçe Mosque is located next to Dolmabahçe Palace, on the Bosphorus. The Palace was built in the 1840s for Sultan Abdulmecid I, because the current palace at the time, Topkapi, was medieval and drafty. The Baroque mosque was commissioned in the mid 19th century by the mother of the sultan, Bezm-i Alem Valide Sultan, however upon her death, her son completed the mosque.

It is 25m x 25m and has just one dome resting on the square base. As its part of the palace complex, it had a second storey for the royalty. Dolmabahçe Mosque is unique in that it has circular windows, which are rarely seen in mosque architecture.

The Hagia Sophia Museum, also known as Aya Sofya, is located next to Sultanahmet Mosque, adjacent to Topkapi Palace. It was built as a Greek Orthodox cathedral in 537 and was transformed into a mosque by the Ottomans in 1453. For a brief period during the Fourth Crusade (1204-1261), Hagia Sophia was a Roman Catholic cathedral. It has been a museum since 1935.

Hagia Sophia is considered one of the most important architectural triumphs of all time. It was a masterpiece when it was built, and until the Seville Cathedral was completed in 1520 it was the largest cathedral in the world. Some of the highlights of Hagia Sophia include the pendentive dome, intricate mosaics, and flying buttresses, which were built during the Byzantine era. 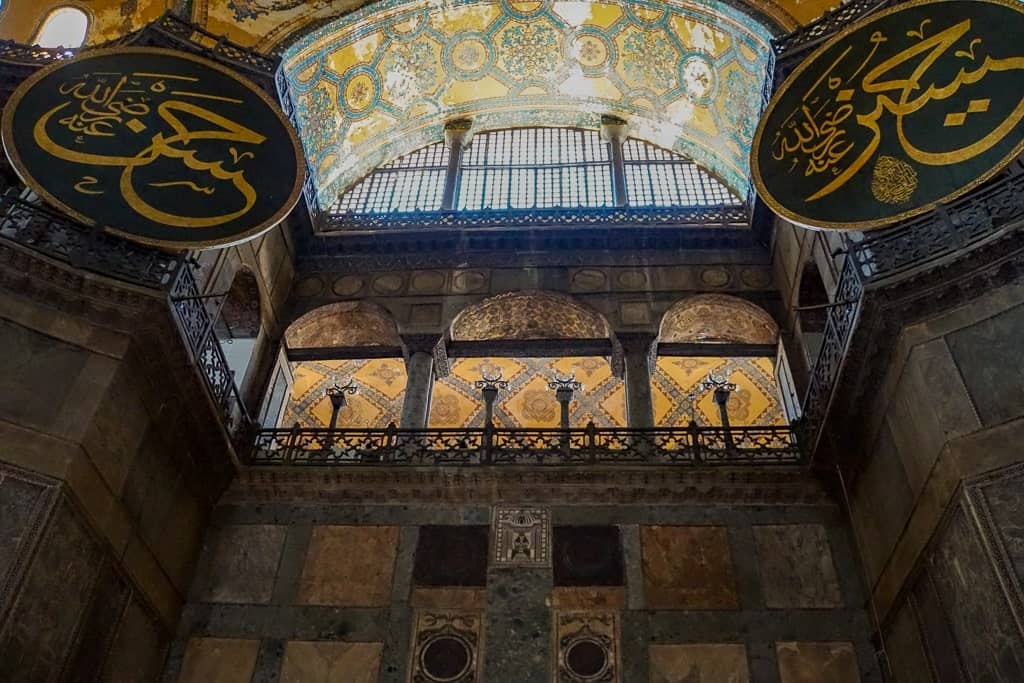 Hagia Sophia also has an upper gallery, where visitors can see the Loggia of the Empress, from which the Empress would participate in the prayers. Keen eyes may also spot some runic graffiti in the upper gallery, rumoured to have been from the emperor’s elite guard, the Northern European Varangians.

Tourist Tips on Visiting a Mosque

Mosques in Istanbul are functioning holy sites, and it is important to respect the Islamic faith when entering. Guests are required to remove their shoes, which you can either take with you or leave in the shelves by the entrance. Both men and women are asked to wear long pants or a long skirt, as shorts and short skirts are considered inappropriate. Visitors should also wear a shirt with sleeves, as showing shoulders and arms is also not appropriate. Women should carry a scarf to cover their head. Women should also cover their hair with a scarf.

I had an amazing time exploring and learning about the mosques of Istanbul. As these impressive historic buildings are very significant to both the history of the city as well as the Ottoman empire, and to the Islamic religion, I felt it was important to understand them. My tour with Context Travel served to guide me into a new understanding of mosque architecture and history, and a new appreciation for Islam, as well as gave me a broad overview of the city of Istanbul. Context has tours in cities across the world, and I highly recommend using them on your next adventure.