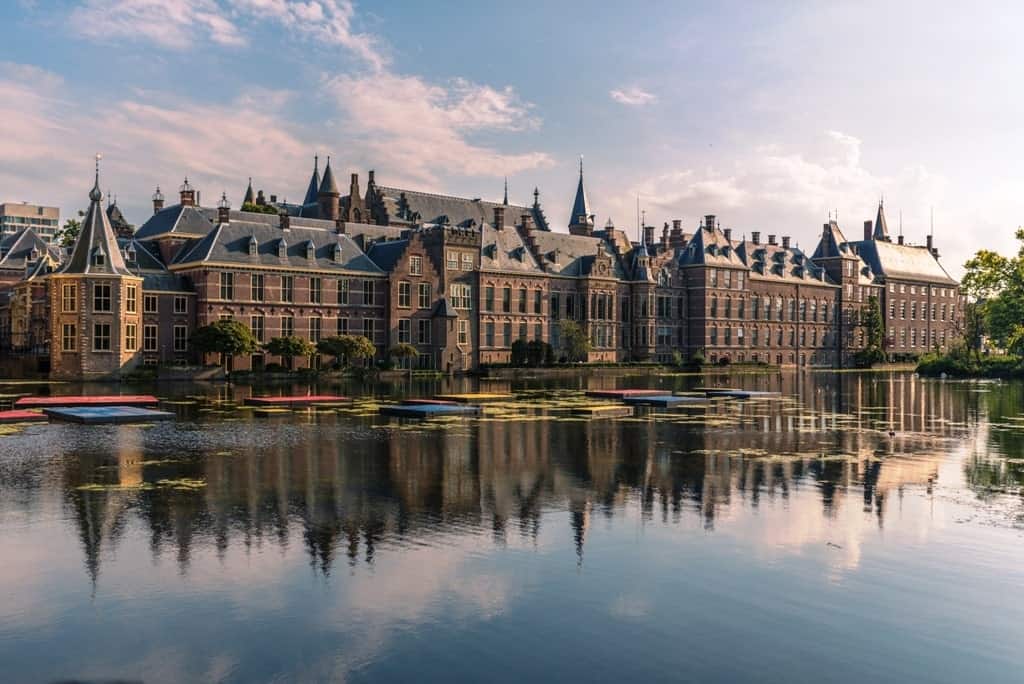 The Hague is the third largest city in the Netherlands, and is the seat of government for the country, despite not being the capital. It is located along the western coast of the country and home to the royal palace, Cabinet, State General, Supreme Court, and Council of the State of the Netherlands. The Hague is also home to over 200 foreign embassies and international government organisations.

Today, The Hague is a thriving city with charming seaside resorts, intriguing art museums and installations, bustling shopping and dining neighbourhoods, and a rich history including the royal family palaces. During my recent trip to The Hague, we experienced a number of things to do in the city. You can read more about the two beaches of The Hague here, while this post introduces more of the city’s cultural and historical elements.

Things to do in The Hague

The Peace Palace is an international law administrative office and is home to the International Court of Justice (the highest court in the world), the Peace Palace Library, and the Permanent Court of Arbitration, as well as the Hague Academy of International Law. It is owned and managed by the Carnegie Foundation, and is the only part of the United Nations outside of New York.

The Mauritshuis is an art museum in The Hague. Its collection of Dutch Golden Age paintings is unrivalled and impressive. Among the well-known artists whose work makes up the vast collection are Rembrandt van Rijn, Johannes Vermeer, Frans Hals, and Hans Holbein the Younger. 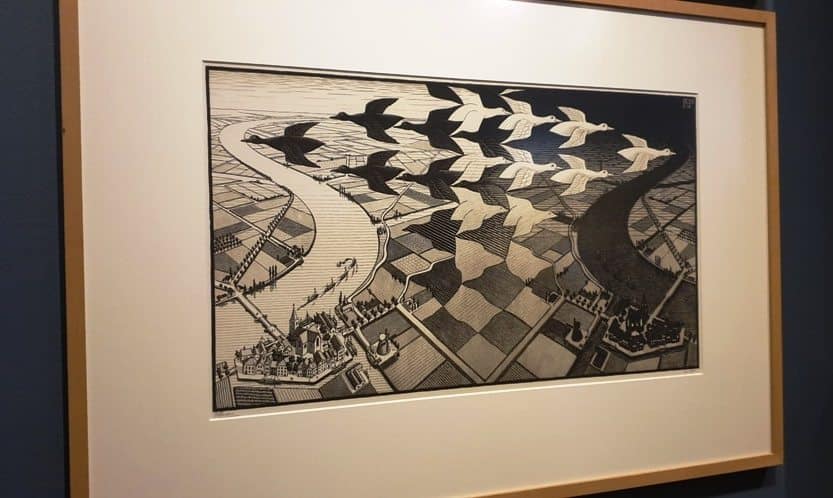 Escher in Het Paleis – Escher in The Palace – is a museum located within the Lange Voorhout Palace in The Hague featuring the optical illusory works of M.C. Escher. Even the modern chandeliers are designed to reflect the work of Escher.

Among the more famous works on display are Air and Water (birds become fish and vice versa), Waterfall (water appears to flow upward), and Drawing (two hands drawing each other). In 2015 it was revealed that many of the works are replicas, not originals as indicated. The palace also houses exhibitions highlighting the former royal residence.

The Panorama Mesdag is a cylindrical illusory painting housed in its original location in a purpose built museum a few blocks from the Mesdag Collection. Painted by Hendrik Mesdag (assisted by his wife, a fellow painter, and several apprentice painters), the view is of Scheveningen Beach from the dunes. Visitors stand on a platform in the centre of the room, and the addition of fake terrain makes the trompe l’oeil very convincing.

The Ridderzaal is a fine Gothic building at the heart of the Binnenhof. It is used on Prinsjesdag, when the king makes the speech from the throne, and for other parliament and state social functions. The stained glass windows feature the coat of arms from various Dutch nobility. 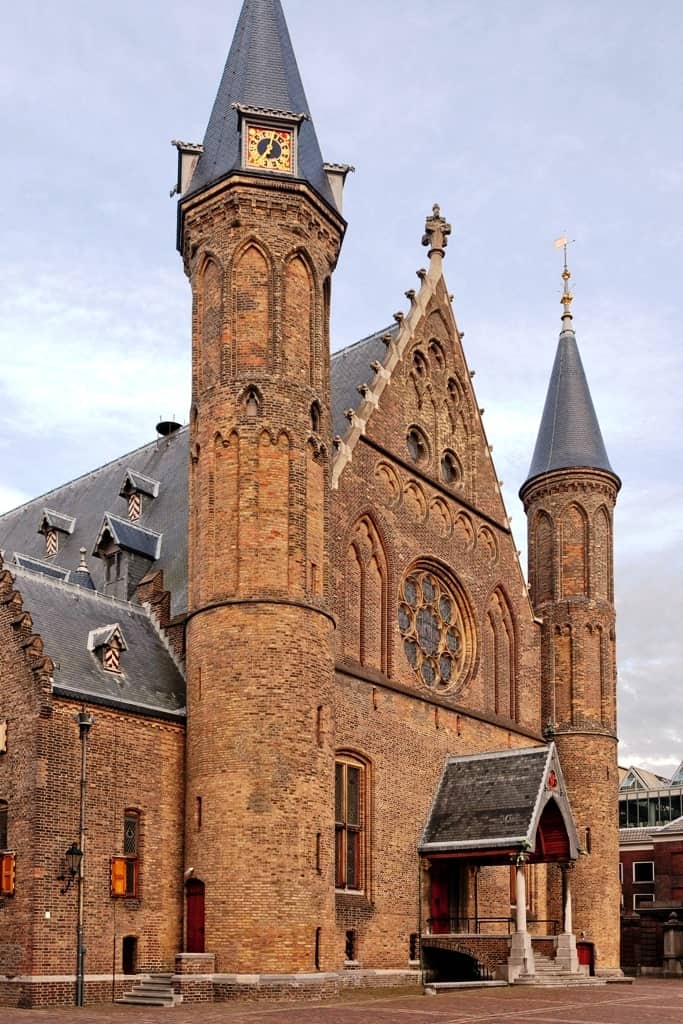 You must visit The Hague Tower for the view, the tallest building in the Netherlands and inspired by New York’s Flatiron Building. Most of the building’s 42 floors are private apartments, but visitors can go to the Penthouse sky bar on the top floor for panoramic views over The Hague.

Grote of Sint Jacobskerk is a 13th century cathedral in The Hague. Along with the Binnenhof, it is one of the oldest buildings in the city and has hosted several royal baptisms and weddings. Two of the church’s stained glass windows were sponsored by Charles V, Holy Roman Emperor; they are among the only few to have survived to modern day. 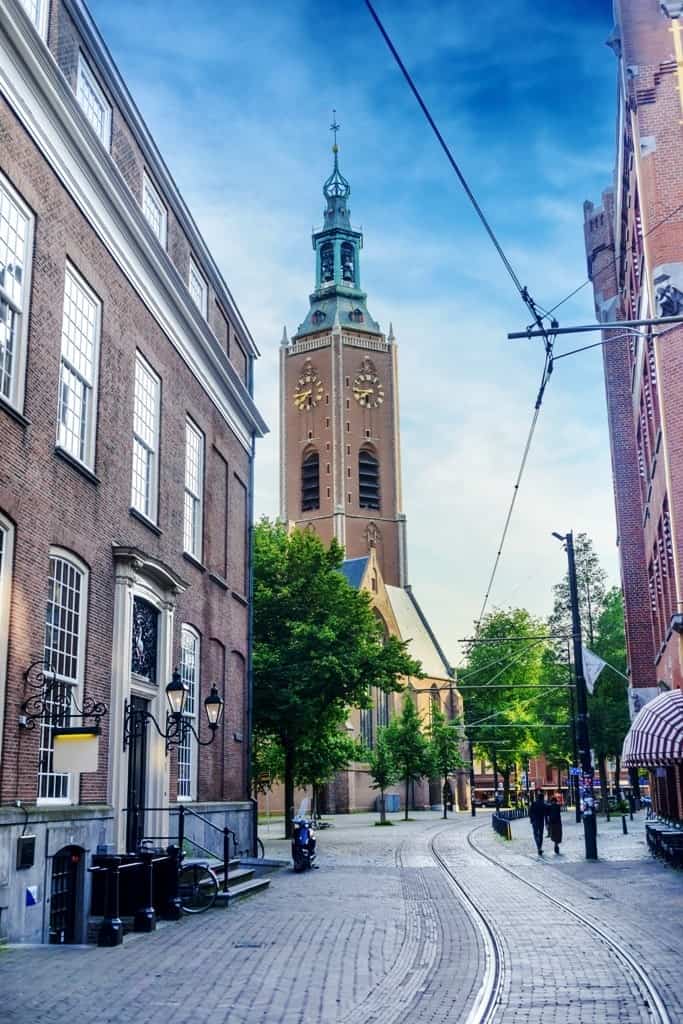 This historic shopping arcade in the centre of The Hague was built in 1885 and counts among the top 100 Dutch UNESCO monuments. It may remind you of the Galleria in Milan, as its unique arched glass ceiling allows light to filter in to the long shopping passages lined with luxury retailers.

Lange Voorhout Street is a wide boulevard lined with stately homes and gardens. Since the 14th century, it is where many nobility lived. Today, visitors can find several embassies as well as museums and fine dining restaurants.

Noordeinde Palace is the Dutch king’s “working palace” since 2013. Originally built as a farmhouse, the palace expanded over the centuries but the original foundations can be seen in the basement. Following a renovation in 1984, the palace finally became the official monarch’s workplace along with administrative offices.

Scheveningen is The Hague’s first beach resort. The pier was built in 1901, and is popular with families and tourists. It is the larger of the two beach resorts, with plenty of shopping and dining along the boardwalk. It’s pier burned down in the Second World War and was rebuilt in the 1959 and restored in 2015. The ferris wheel is the most popular attraction at the pier, but the newest attraction at the pier is a zipline, where you get a birds-eye view of the beach and coastline.

The Voorlinden Museum is a new modern and contemporary art museum in Wassenaar, a short distance from The Hague. It is a private museum featuring modern art, sculpture, and gardens.

Where to eat in The Hague

Coffee and cake in the Hop & Stork

Hop & Stork is a chocolate and coffee shop located within the historic arcade in The Hague. It is well known for its open-studio chocolate factory as well as a terrace where you can enjoy a coffee (voted the best in the Netherlands) and cake.

Lunch at the The Barlow

The Barlow is located in the Plein, or the main square of The Hague. The contemporary decor is matched with the vibrant menu of coffees, cocktails, draft beer, and European wines. While they serve everything from coffee through to late night cocktails, lunch is a great time to be here to enjoy the modern twist on Dutch-Indian fusion foods and people watch in the square.

Lunch at the Bleyenberg Rooftop

Bleyenberg Rooftop is a new establishment located on the top of a former DIY store. Named for the owner of the store, the building features a number of eateries and bars, including a drive-thru, ground level coffee shop.

Hotel des Indes is a five-star luxury hotel and member of Leading Hotels of the World. Built in the colonial style, with rich colours, glittering chandeliers, and opulent furnishings, the hotel is the perfect place to enjoy high tea. A four-course high tea includes decadent sandwiches, scones, and pastries alongside traditional teas prepared in the traditional manner. The Royal High Tea includes a glass of champagne.

Dinner at the Penthouse in The Hague Tower

The Penthouse is the highest fine-dining restaurant in the Netherlands. It’s located within The Hague Tower in the centre of the city and boasts a modern menu inspired by traditional ingredients.

The Hague’s rich history aligning with the Dutch maritime industry and government offices offers visitors a nice alternative to the bustle and commercialism of Amsterdam. The beaches are great for families or friends seeking a relaxing weekend, and the dining and bar scene rivals that of large cities. I enjoyed my trip to The Hague and recommend it for your next trip to the Netherlands!

I was a guest of The Hague Marketing but as always opinions are my own.