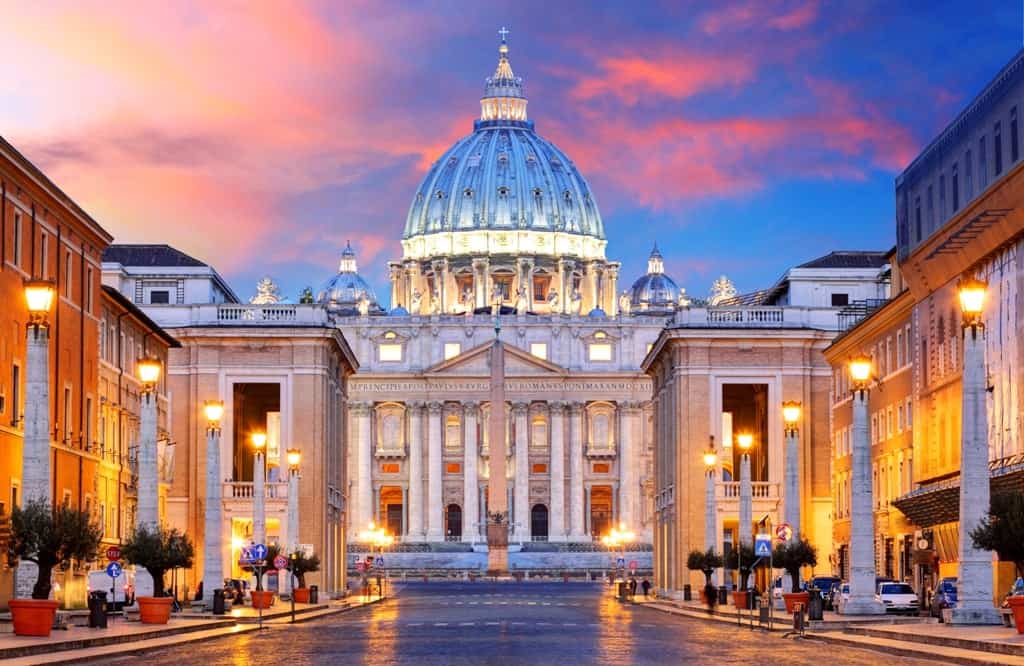 The Vatican is the smallest state in the World and it is an unmissable stop of any trip to Rome. It is worth a full day of sightseeing, thanks to its great spiritual value and its richness of works of art by many worldwide famous artists.

12 Things to do in Vatican City

One of the first things you’ll see in Vatican City is this huge square that can host more than 300.000 people on special occasions (ex: Jubilees, Pope’s blessings, Masses, etc.). This square was designed by Bernini in 1667 and its main feature is its imposing colonnade. In the middle of the square, you’ll also see an Egyptian obelisk and the so-called “twin fountains”. These fountains only look the same, because they were designed by two different artists (Bernini and Maderno) in different years (1677 and 1614).

It is the Pope’s church and the most important religious place for Christians. It was inaugurated in 1626 and several famous artists worked here (Bramante, Bernini, Michelangelo, and Maderno).

What are the main points of interest inside the basilica? 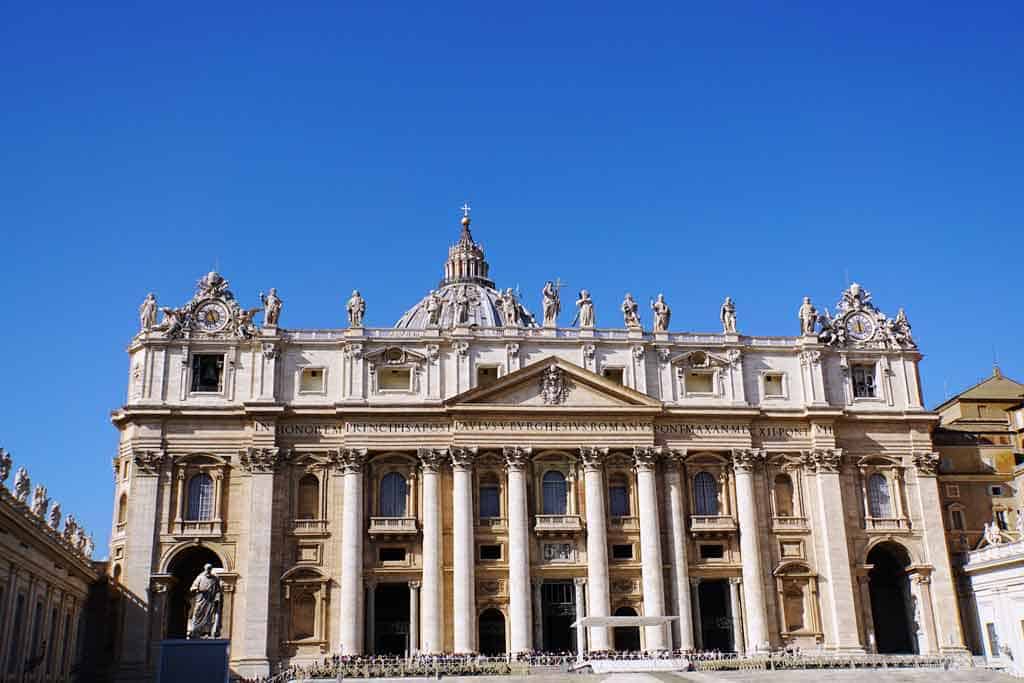 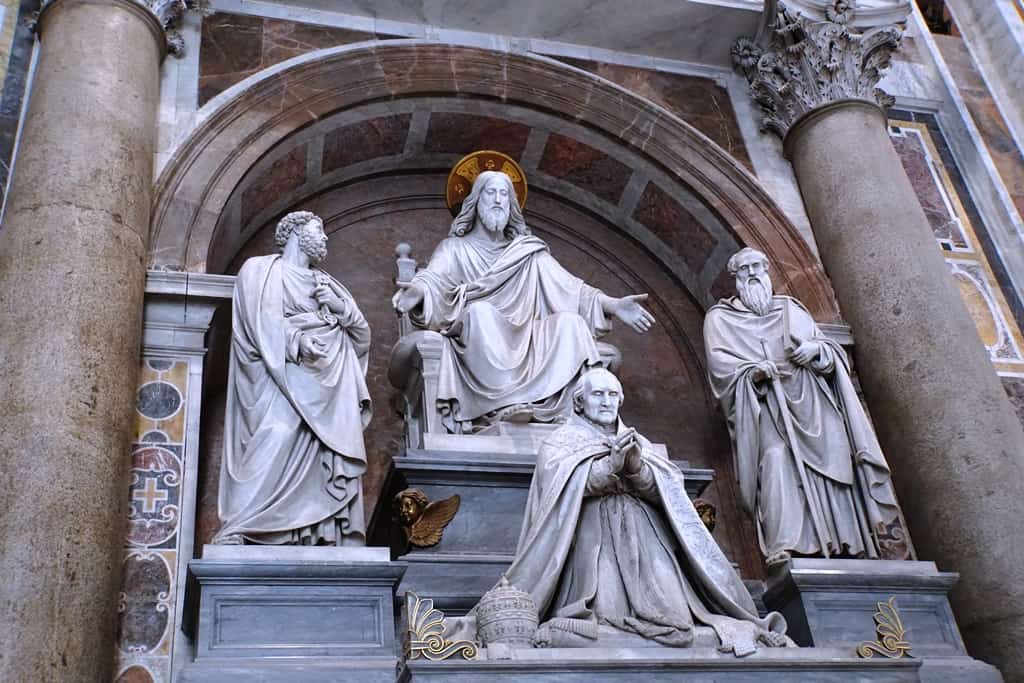 To fully enjoy your visit and skip the line at the entrance you can join this guided tour.

3. Visit the Museum of the Treasure 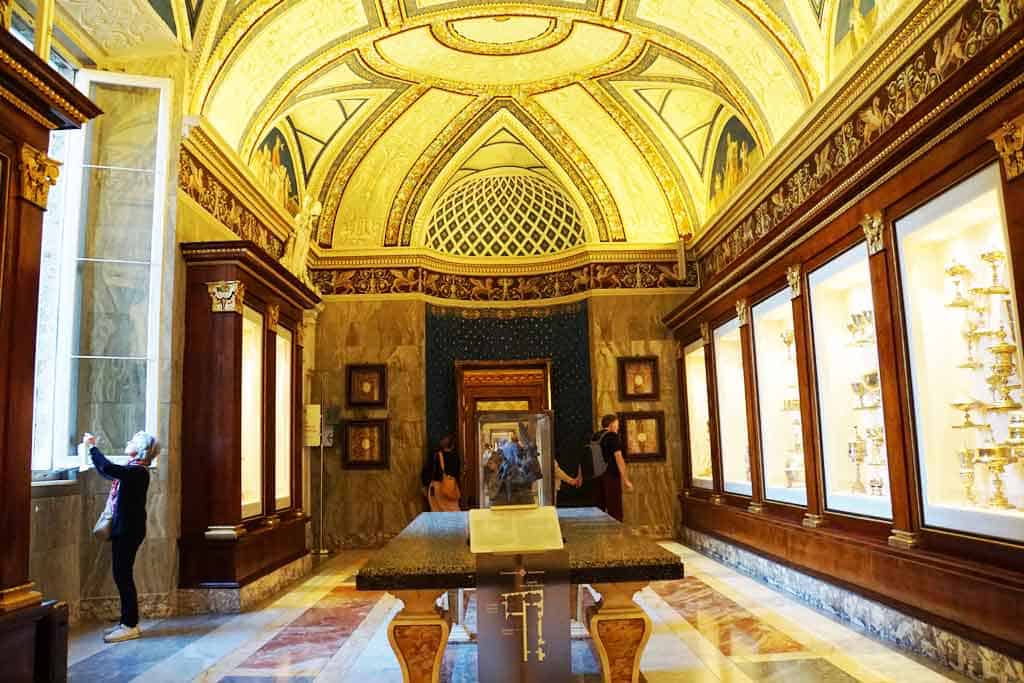 4. Explore the underground to reach the Sacred Grottoes

They are right under the central nave of the Basilica and they house the tombs of the Popes. The most famous one is the tomb of Bonifacio VIII with the beautiful statue by Arnolfo di Cambio. Opening hours: from 7 a.m. to 6 p.m. Cost: free.

5. Walk along Via della Conciliazione

It is a large street connecting S. Angelo Castle to St. Peter’s Square. This is also the border dividing Italy from the Vatican State. The border is symbolized by a line made in travertine marble.

6. Spend half a day wandering through the Vatican Museums 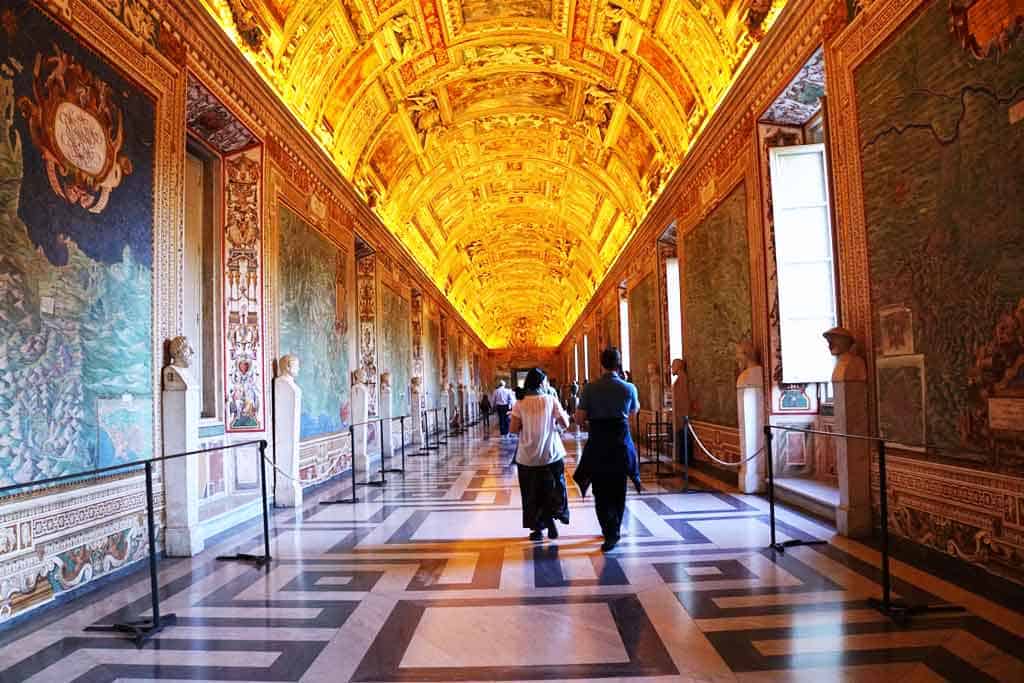 Together with St. Peter’s Basilica, they are the main reason why tourists from all over the world visit the Vatican State. The first part of this huge museum dates back to 1503 when Pope Giulio II offered his private collection to the city. 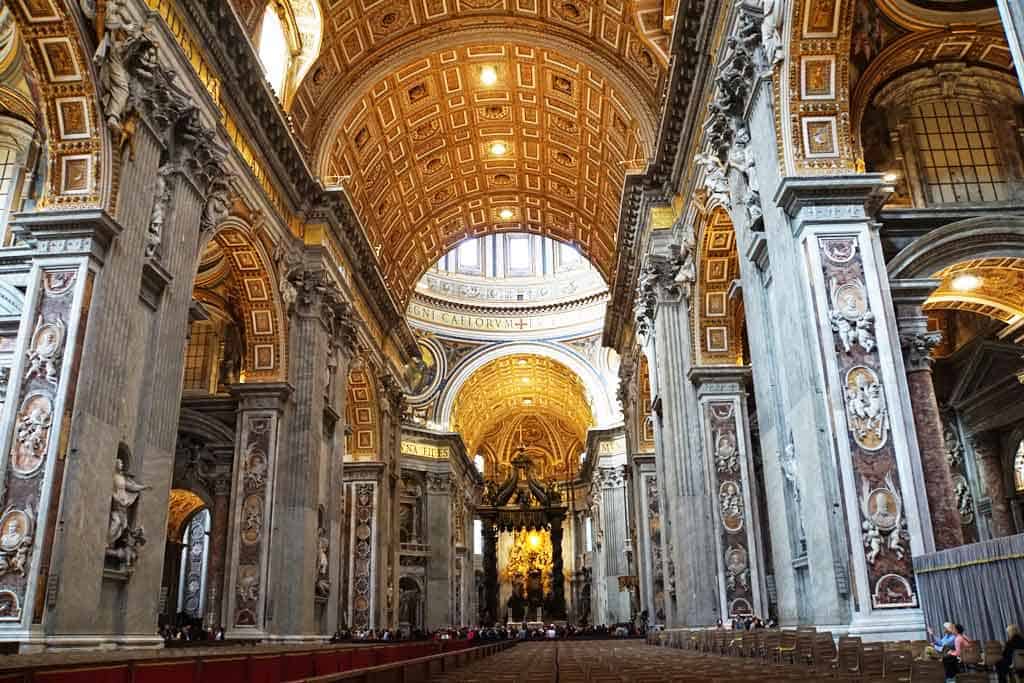 The best way to enjoy the Vatican if you don’t have much time is by this Pristine Sistine, early entrance small group Vatican tour by the Walks of Italy. The reason I like this tour is that you get inside the Vatican one hour before it opens, the group is up to 14 people and you get to see the Vatican in under 4 hours.

7. Have a walk in the Vatican Gardens 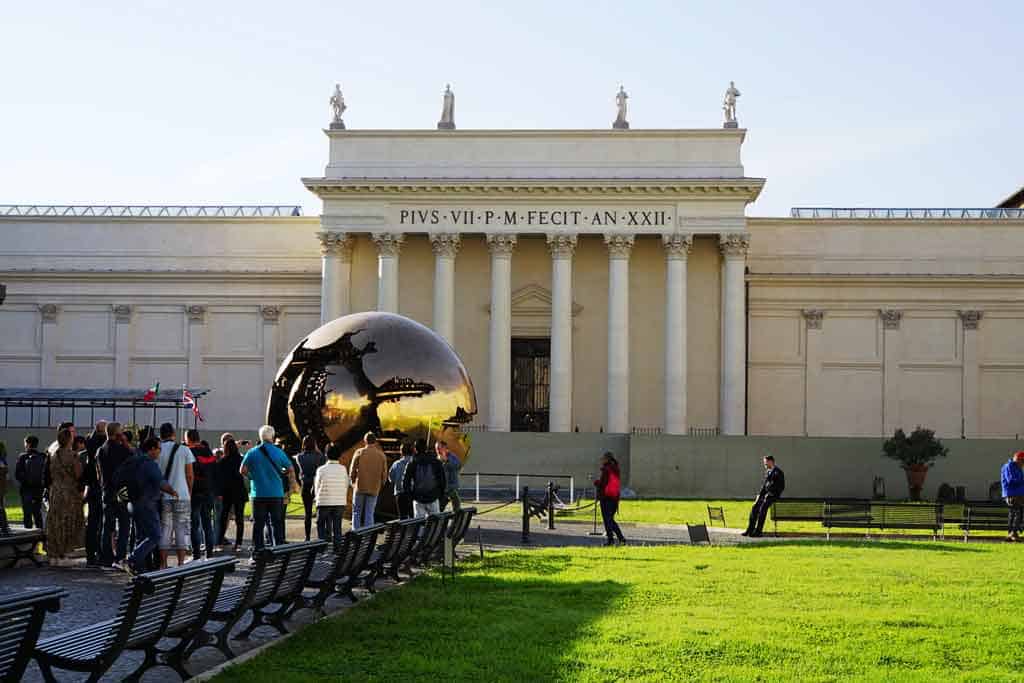 This beautiful park of 32 hectares dates back to the XVI century when Pope Niccolò III planted an orchard and a grassland. In the XVI century, Pope Giulio II asked Bramante to design a Renaissance garden with a maze, fountains, statues, and belvedere. Today you can only visit the gardens by joining a guided tour. Address: via Paolo VI 29. Opening hours: from 9 a.m. to 6 p.m. Closed on Wednesday and Sunday. Cost: 33 euro (guided tour lasting 2 hours).

This is another important place for Christians because St. Peter is buried here. This necropolis is located underground, far below St. Peter’s church, where an ancient cemetery was discovered. You can join a guided tour to visit St. Peter’s basilica and the necropolis below at the same time. Opening hours: from 9 a.m. to 6 p.m. and Saturday until 5 p.m. Closed on Sunday. Cost: 12 euros. 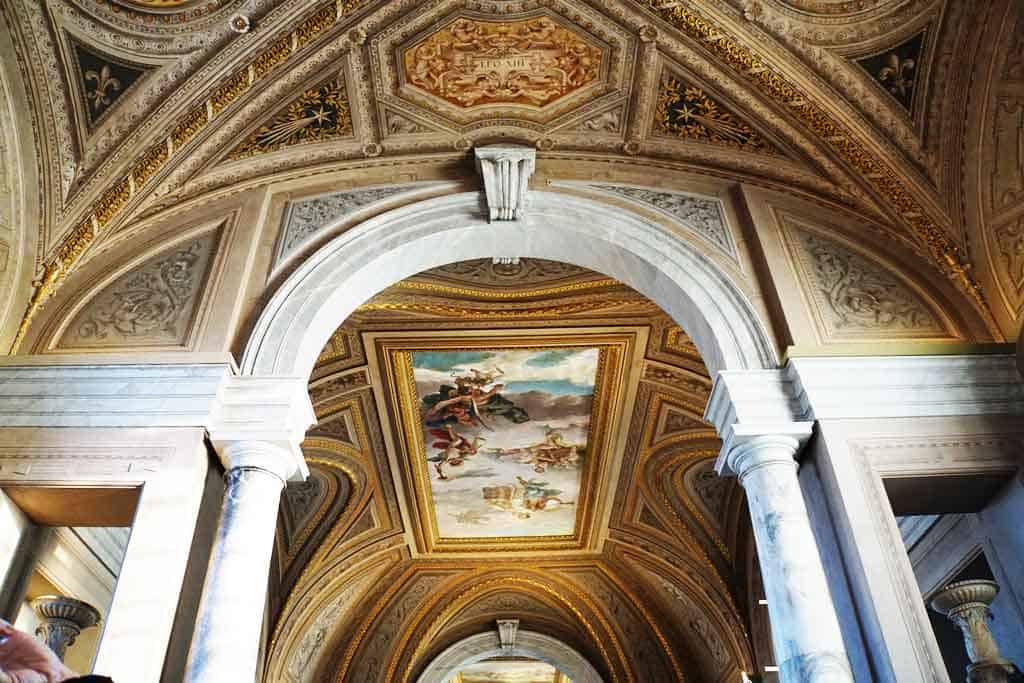 9. Get the Pope’s blessing

The building overlooking the colonnade in St. Peter’s Square is called Palazzo Apostolico and it is where the Pope lives and speaks to the crowd. He speaks from the window of his private office. To see him, you shall go there on Sunday at midday.

10. Visit the church of St. Anne of the Grooms

Grooms were the court attendants during the Middle Ages and St. Anne was their patroness. This nice church dates back to the XVI century and it is located on the border separating Italy from the Vatican State, right close to Porta S. Anna (one of the entrances to the Vatican). Address: via S. Anna Opening hours: from 6 a.m. to 1 p.m. Cost: free. 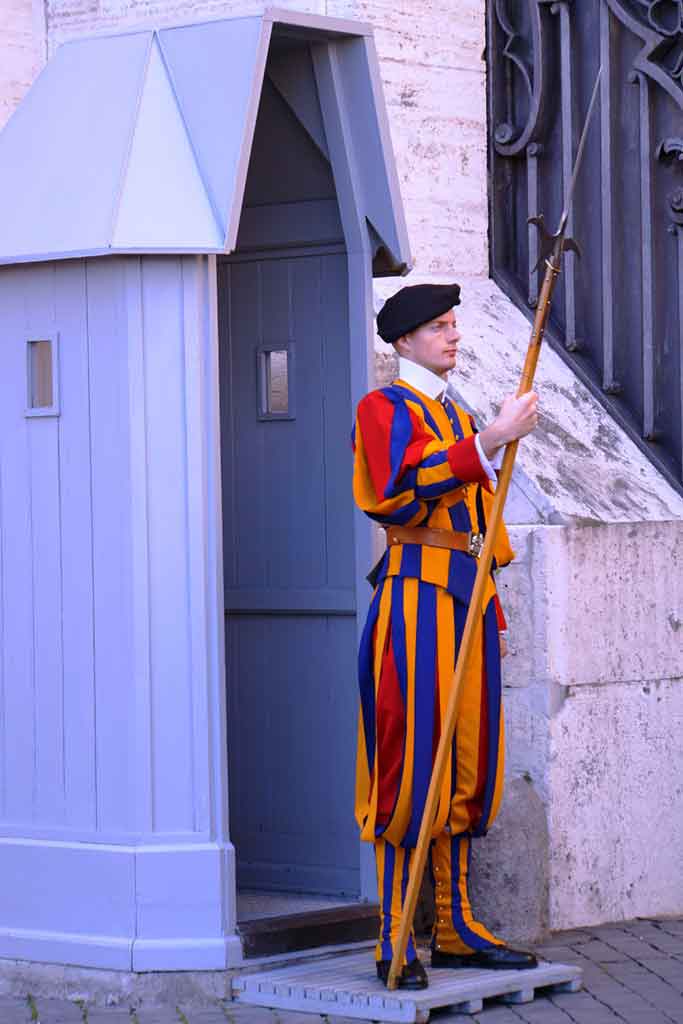 They belong to the Pope’s army, which was established in 1506. They protect the Vatican State and they are the Pope’s bodyguards. On official occasions, they still wear the traditional Renaissance costume and they bring a halberd and a helmet. During ordinary days, they are dressed like modern bodyguards. Only Swiss citizens are allowed to enroll as Swiss Guards.

12. Visit the church of St. Stephen of the Abyssinians

It is located behind St. Peter’s basilica and it dates back to the V century A.C. It takes its name from a former convent dedicated to host Copt monks (mainly from Egypt). Its most important features are its decorated portal and the remains of the medieval church.

Tip: Visiting there is an essential Rome experience, and it will be quite overwhelming! Before anything, you should know that the queues are huge.  No matter how much you think you can wait, you can’t. The queues go on for seemingly forever, so I recommend a skip a line tour or an early entry small group tour. Both times I’ve been there were with the skip the line guided tour, and it added to the overall comfort and convenience of my entire visit there. If you’re not really into tours, you can wander on your own and skip the lines.

How to get to Vatican City? 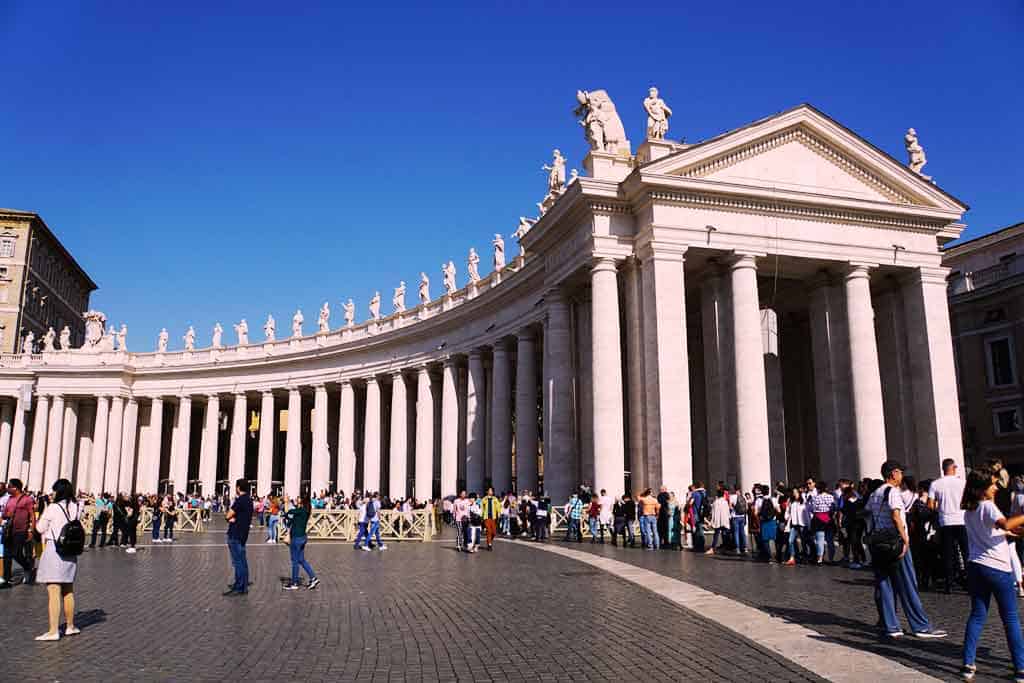 The fastest way to get there is catching the subway (line A). There are no stops inside the Vatican State, but the nearest ones are Ottaviano (500m from the main entrance of the Vatican Museums) and Cipro.

How to see the Pope? 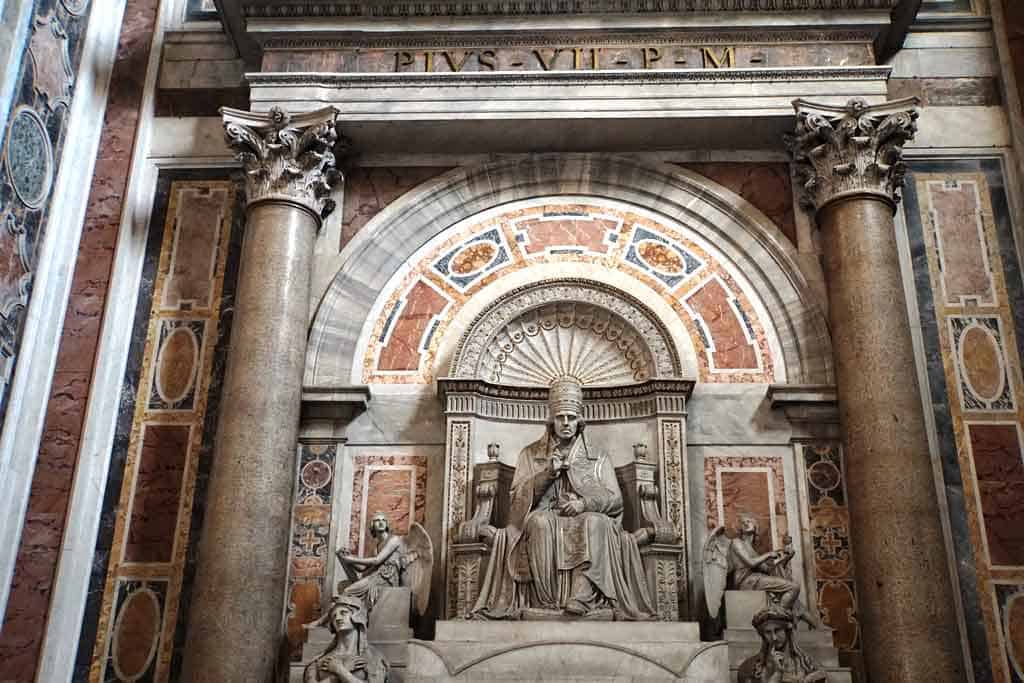 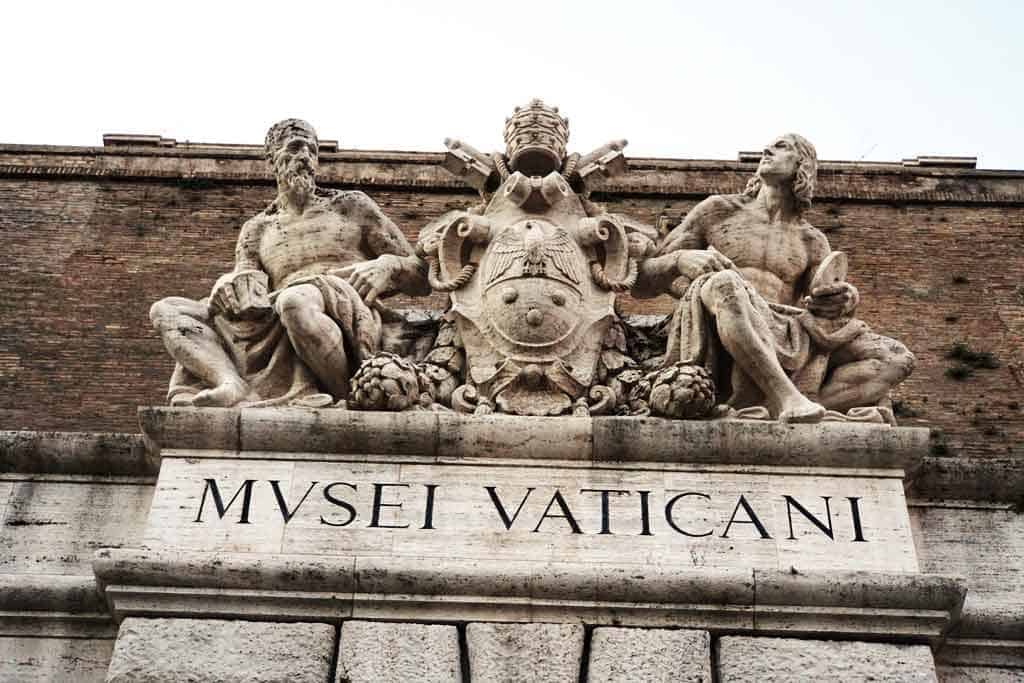 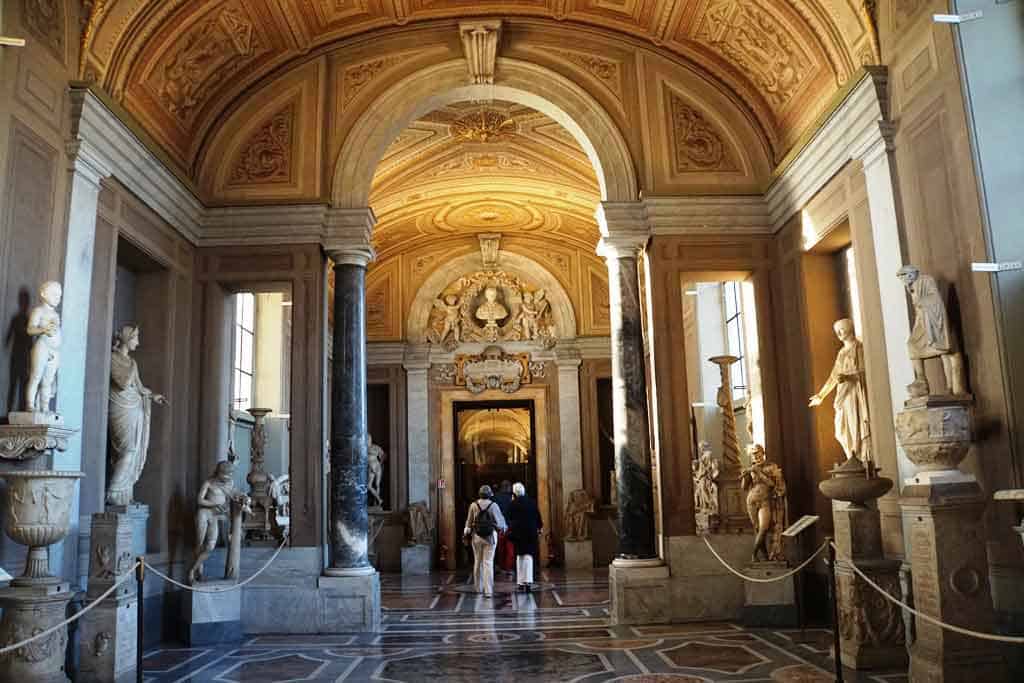 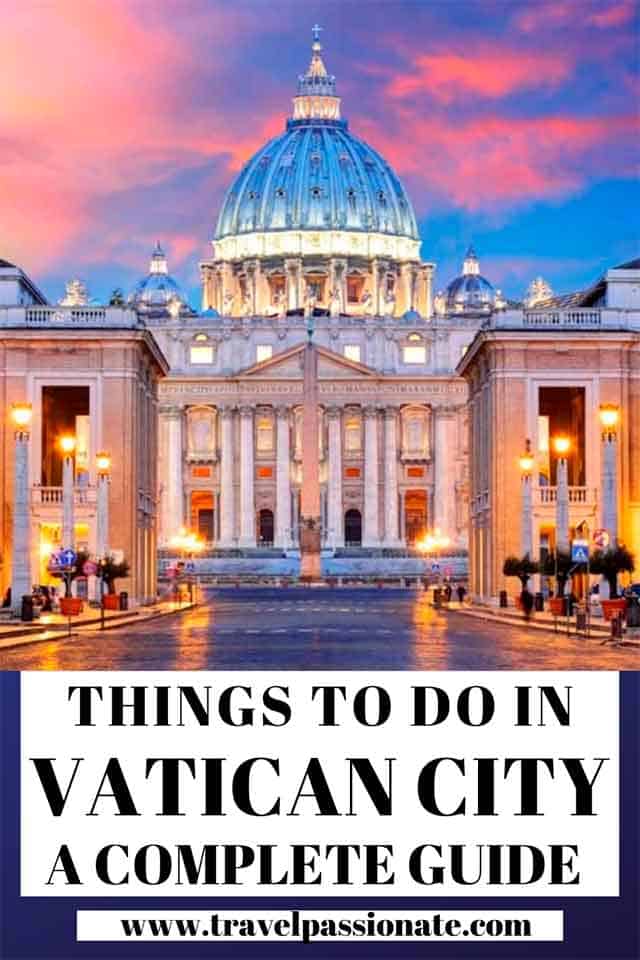