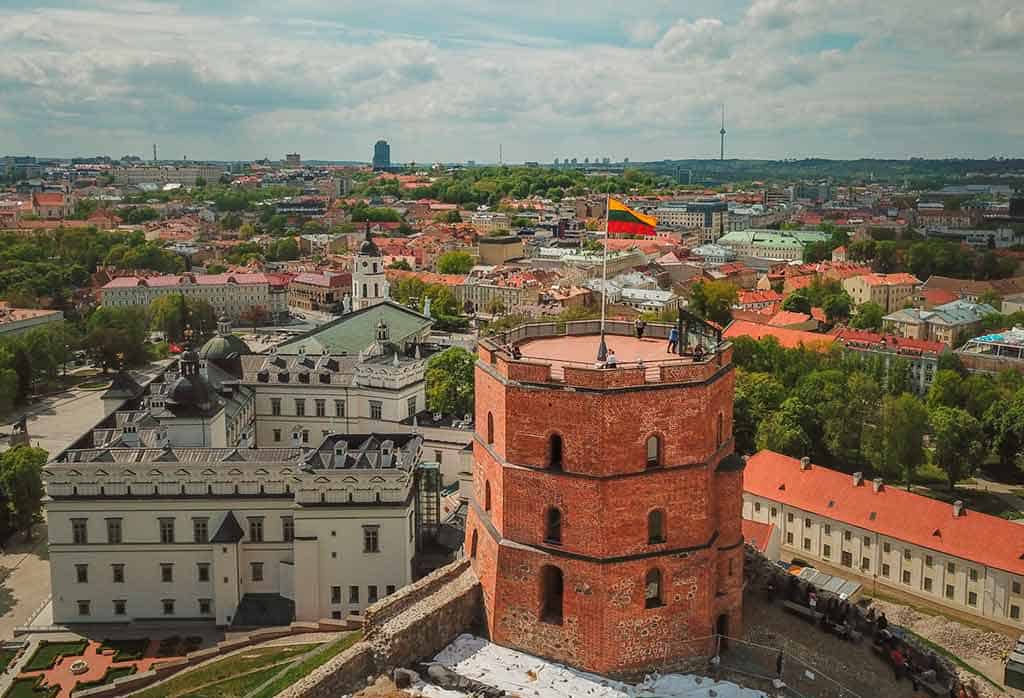 Vilnius, the capital of Lithuania, is a bustling city of around 575,000 people. Like so many other medieval cities, Vilnius developed around one central town square, and today its radiating streets and tiny courtyards are the beating heart of this charming Old World city. Vilnius dates back to the 13th century, when it was merely a castle and surrounding village. By the 14th century, Vilnius was a fairly well known city, referenced in many German letters, as the capital of the Grand Duchy of Lithuania.

Over the next few centuries, Vilnius was part of the Polish-Lithuanian Commonwealth, when it was a thriving university town, and later the Russian Empire, where it was the 3rd largest city. In the late 19th century, Vilnius had one of the largest Jewish populations in Europe. After the First World War, Vilnius was fought over by the Polish and Lithuanians, who both regarded the city as theirs. During the Second World War, the city was occupied first by the Soviets and next by the Germans. Following the war Lithuania was a Soviet state; it gained independence in 1991.

Today it is a modern European city. In 1994, the city centre was designated a UNESCO World Heritage Site, and in 2009, Vilnius was the European Capital of Culture alongside Linz, Austria.

I was invited to explore Vilnius by Tinggly, a company whose experience boxes are a unique gift for anyone. You choose from hundreds of gift boxes, but your recipient chooses the experience they want in the country of their choice.

22 Fun Things to do in Vilnius 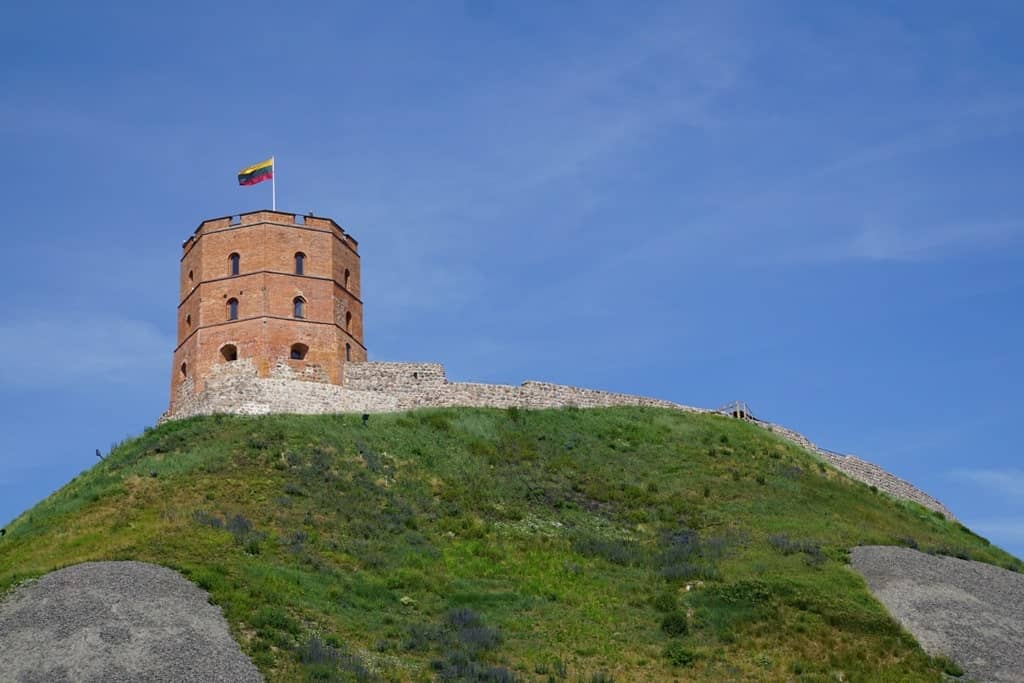 Gediminas Castle, once the home of the Grand Duke, was built in the early 15th century. The tower is one of the only remaining parts of the building and was rebuilt in 1933 by a Polish architect. The tower houses an archaeological museum with findings from the surrounding areas and models of the castle throughout the centuries. It is possible to climb to the top of the tower. 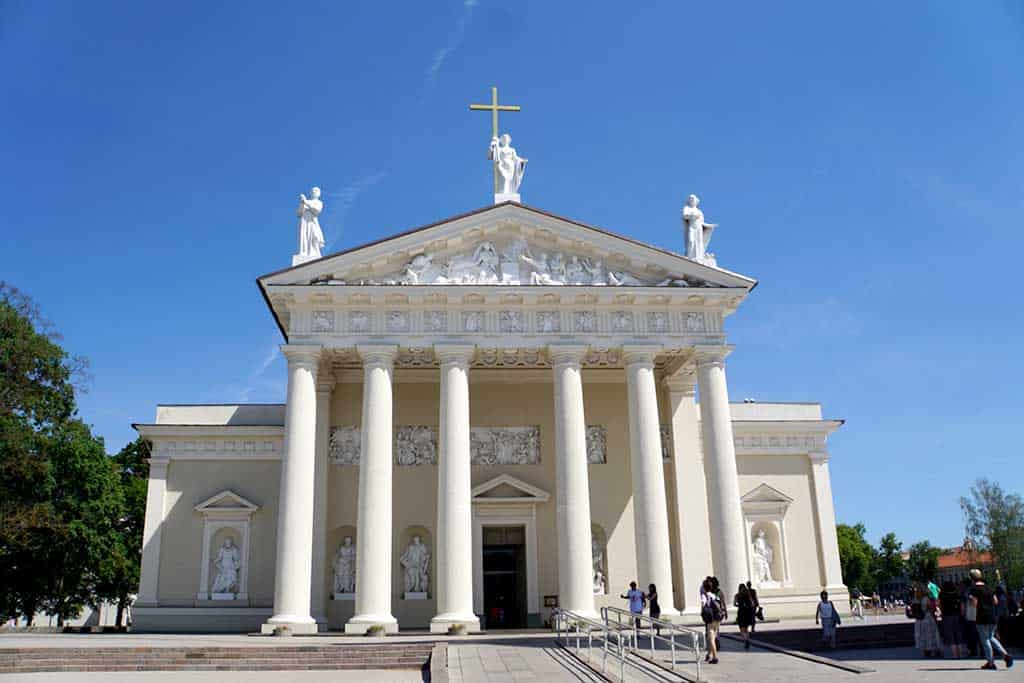 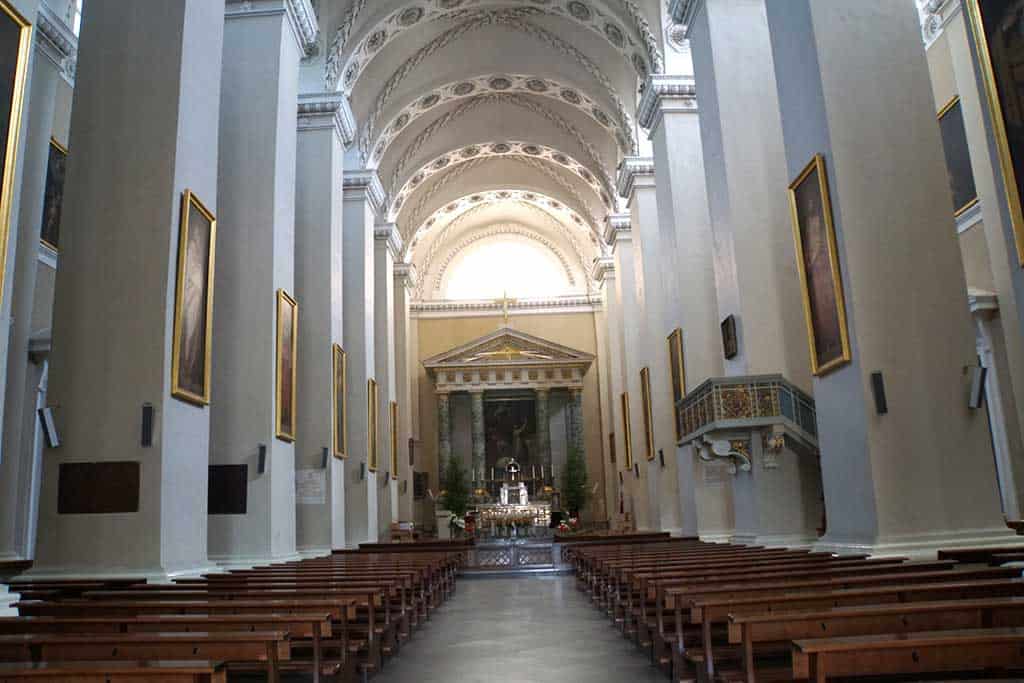 Vilnius Cathedral, also known as the Basilica of St Stanislaus and St Ladislaus of Vilnius, is the main Roman Catholic church in Vilnius. Located in the main square of Vilnius, the cathedral is where all of the Grand Dukes of Lithuania were coronated; many were also baptised and buried here.

3. Palace of the Grand Dukes of Lithuania

The Palace of the Grand Dukes of Lithuania was constructed in the 15th century for the Grand Dukes of Lithuania and later Kings of Poland. However, the building we see today is not the original, which was demolished in 1801. In 2001, the palace was rebuilt on the site of the original palace and was completed in 2018. It is located on the northern side of the Old Town, adjacent to the Neris River. 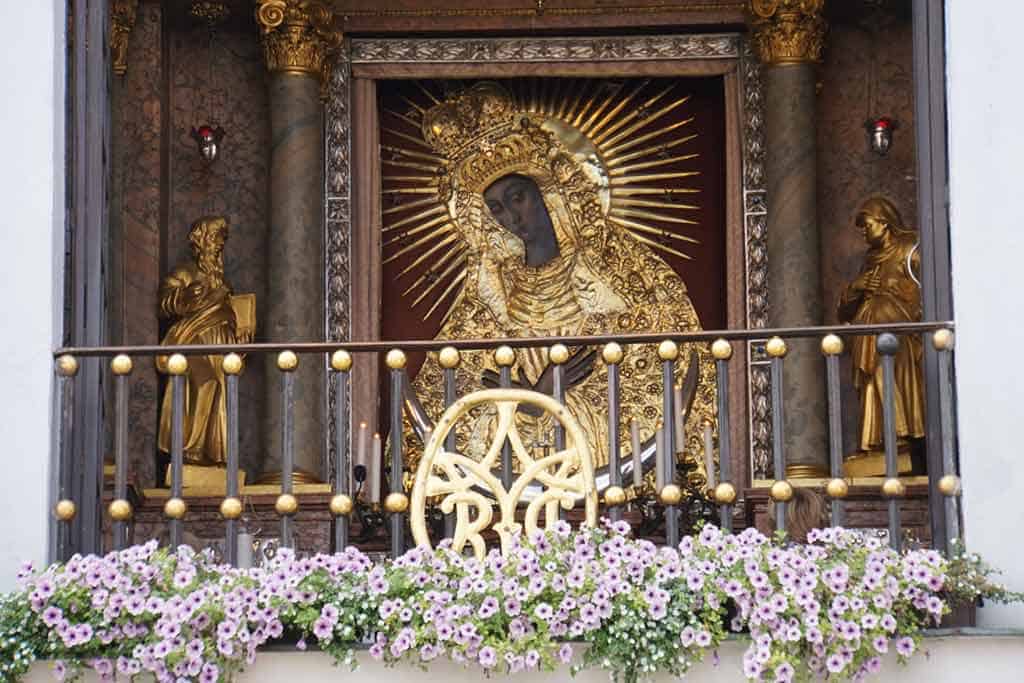 The Gate of Dawn is the only standing gate of the former defense fortifications of the walls of Vilnius. Also known as Medininkai Gate, it is located on the southern side of town, leading to the town of Medininkai. The fortifications were built in the early 16th century and destroyed in the 18th. The Gate of Dawn, in addition to being a city gate, is also a chapel and shrine to the Virgin Mary. 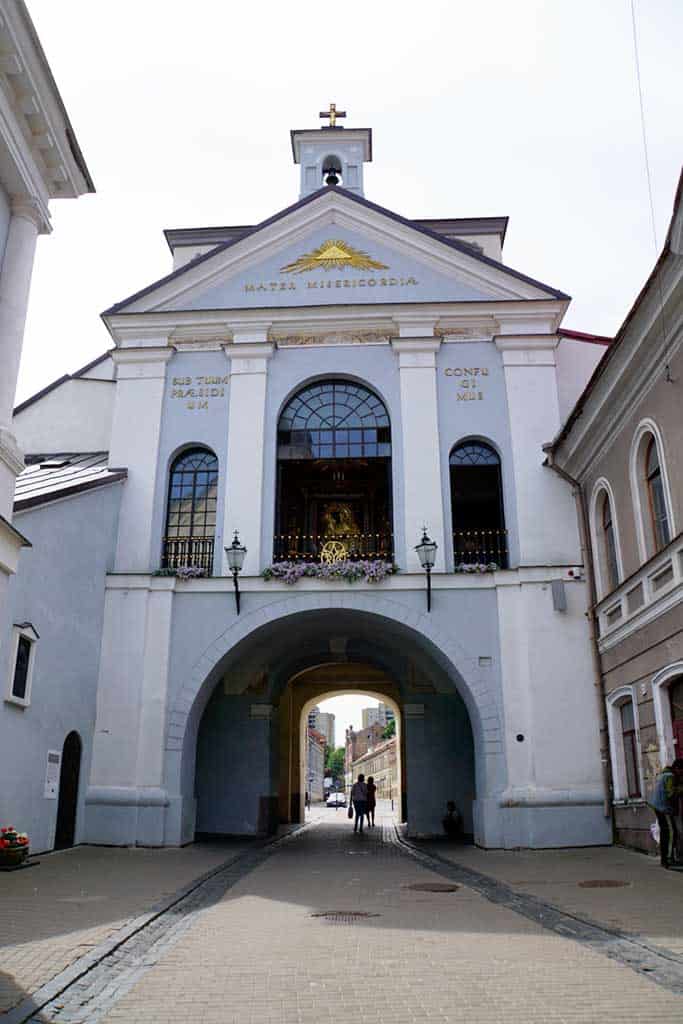 The Church of St. Anne is located in the heart of Old Town, on the Vilnia River. It was built in the late 15th century on the foundations of a church that burned in the early part of the century. Its facade is Flamboyant Gothic, a much more elaborate style of architecture than Gothic, and is one of the most interesting examples of Gothic architecture in Lithuania.

6. Museum of Occupations and Freedom Fights

Also known as the KGB Museum or the Genocide Museum, the Museum of Occupations and Freedom Fights highlights one of the darkest periods in Lithuanian history. The building was occupied by the Nazis as Gestapo headquarters from 1941 until 1944, when the Soviets took over. The KGB remained in the building until 1991, and the prison cells are exactly as they left them. The rest of the building introduces visitors to the Lithuanian Resistance, the deportations, and everyday life during the second half of the 20th century.

According to legend, seven friars were beheaded on this hill, which rises high above the city and the rivers. Since that time, 3 wooden crosses were erected and replaced as needed, but when they fell in the late 1860s, the Tsarist authorities did not allow them to be rebuilt. In the 1910s, a Polish-Lithuanian architect designed a concrete memorial, which was torn down by the Soviets in 1950, and in 1989 a new memorial was unveiled. Climb the hill to the small observation deck at the base of the towers for sensational views of the Old Town. 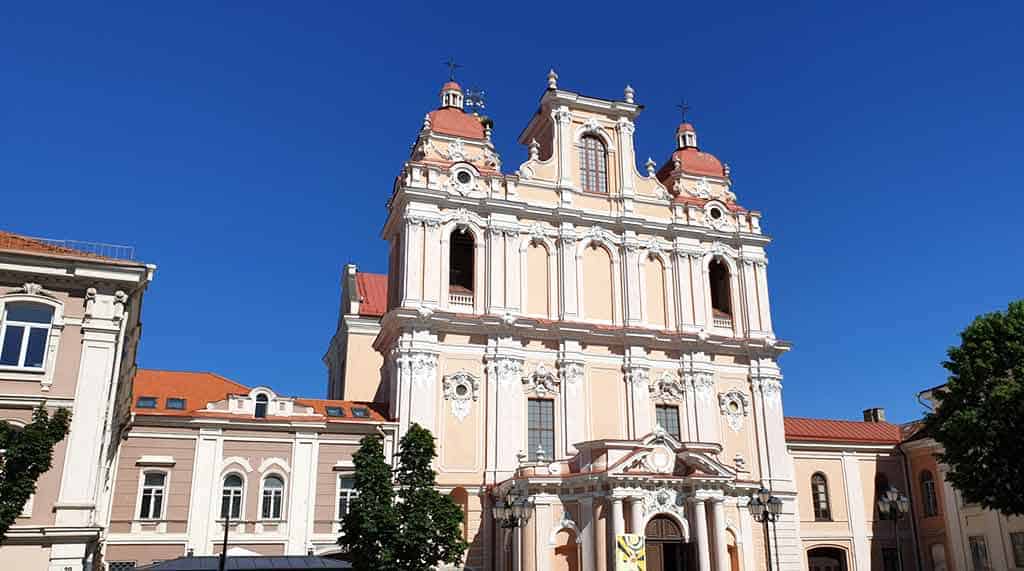 St. Peter and St. Paul’s Church, located in the Antakalnis neighborhood within the former Canons Regular of the Lateran monastery, is a masterpiece work. It has over 2,000 interior decor elements, all stucco figures by Italian artists, and is often considered one of the most unique churches in Europe. It dates to the 17th century, following when the monastery was burned and the original church destroyed in the war with Russia. The church was damaged in the Second World War and restored under the Soviets in the late 1970s and 1980s. Today it is a must-see on your trip to Vilnius. 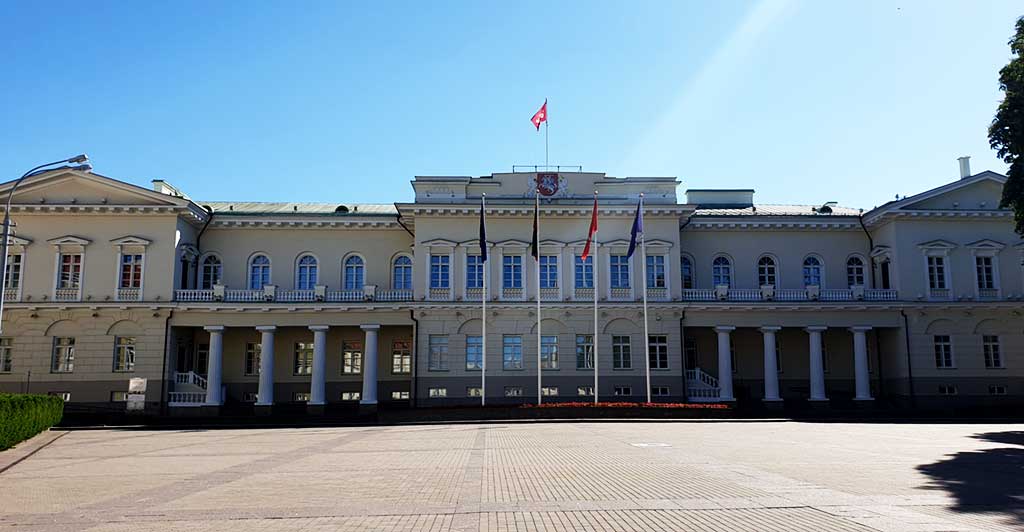 The Presidential Palace is the official residence of the President of Lithuania, although its early years were spent housing the city’s Catholic clergy. In the late 18th century, Tsarist governors occupied the building, enlarging it to its current, palatial, status. Free tours are available on Friday evenings and weekend days.

10. The Campanile of Sts Johns

The Campanile of Sts Johns is one of the tallest towers in Old Town, at 69 metres tall, making it the perfect spot to climb for panoramic views of the city. Located within the Vilnius University grounds, the Campanile of Sts Johns belongs to the Church of St. John the Baptist and St. John the Evangelist (hence the Sts Johns monikers). The campanile was built in the 16th century, separate from the church, and both have been witness to abject horrors during the war. In 1991 the church and campanile were returned to their parishioners and in 1993, Pope John Paul II visited. 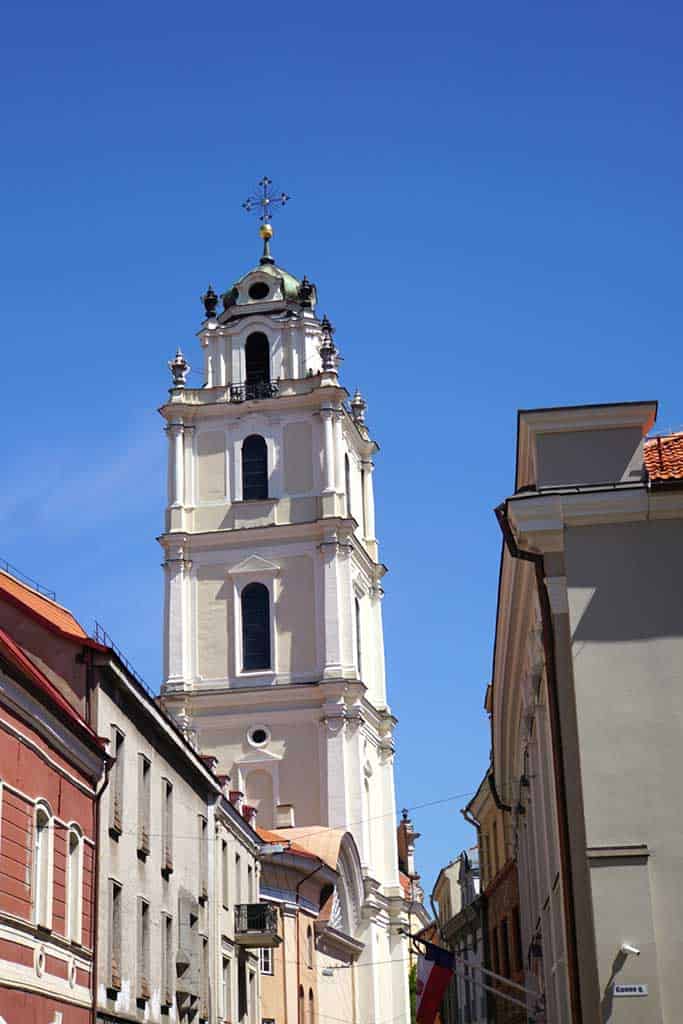 Bernardine Park is located in the heart of Vilnius, near Gediminas Hill, the Vilnia River, and the Bernardine Monastery. It has been a park and botanical garden since the 15th century, but has been destroyed and restored several times over the course of the centuries. Most recently it was reconstructed in 2013 and is now a highlight of the Old Town, with 9 acres of parkland along the river, a small amusement park, and space for festivals and exhibitions.

12. The Bastion of the Vilnius Defensive Wall

The Wall of Vilnius was built in the early 16th century as protection from attack from the Crimeans. It originally contained nine gates and an artillery baston; of these just the Gate of Dawn and the bastion have survived. The Bastion is now the museum of militaria, and also has picturesque views of Old Town from the terrace.

Pilies Street is the street where everything happens in Vilnius. Running from Cathedral Square to the Town Hall Square, Pilies Street is lined with shops, restaurants, bars, and more. It’s the former market street in Old Town, and today retains that character with plenty of day and night activity.

Vilnius has a lot of street art, but currently the most famous is the mural of Trump and Putin. Originally seen kissing, the piece was vandalised and later modified. Still, like much of the other street art in town, this piece – located on the side of a barbecue restaurant in the railway station – is definitely worth seeing.

Vilnius University is the oldest university in the Baltic States. It is also one of the oldest and most famous universities in Central/Eastern Europe, after Prague, Budapest, and Bratislava. When it was founded in the 16th century, it was the easternmost university in the world. It has a long history of Russian, Jewish, and Polish influence, and like many other academic institutions, it closed several times during wars and occupations. Vilnius University is worth visiting to see all of the major architectural styles across its many beautiful buildings.

17. Fly with a Hot Air Balloon Above Vilnius

Vilnius is one of the few European cities where hot air ballooning is possible at all, and with the old town and natural surroundings, it is also one of the most stunning. A one hour flight is all you need to experience this unique view of Vilnius.

A food tour is one of the best ways to experience another culture. Lithuanian food is a unique fusion of Polish, Jewish, Russian, and Italian influences. With this food tour from Urban Adventures, you will taste a selection of organic produce, smoked meats, fish, and cheese, homemades cakes, and more. You also get to try local drinks, from beer and wine to mead and kvass.

19. Visit the Republic of Uzupis 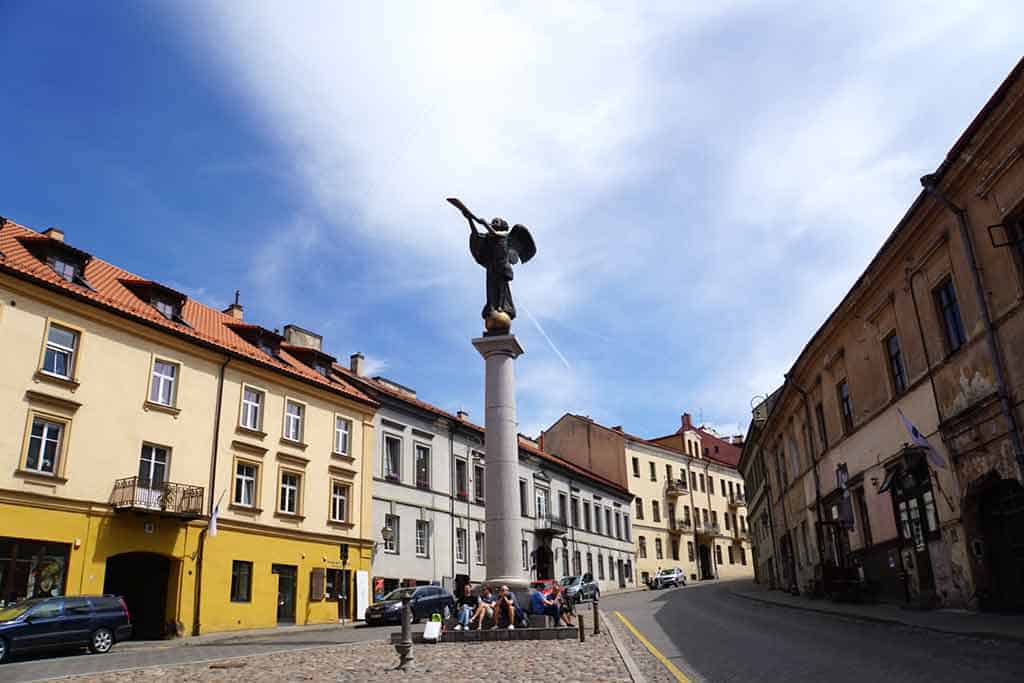 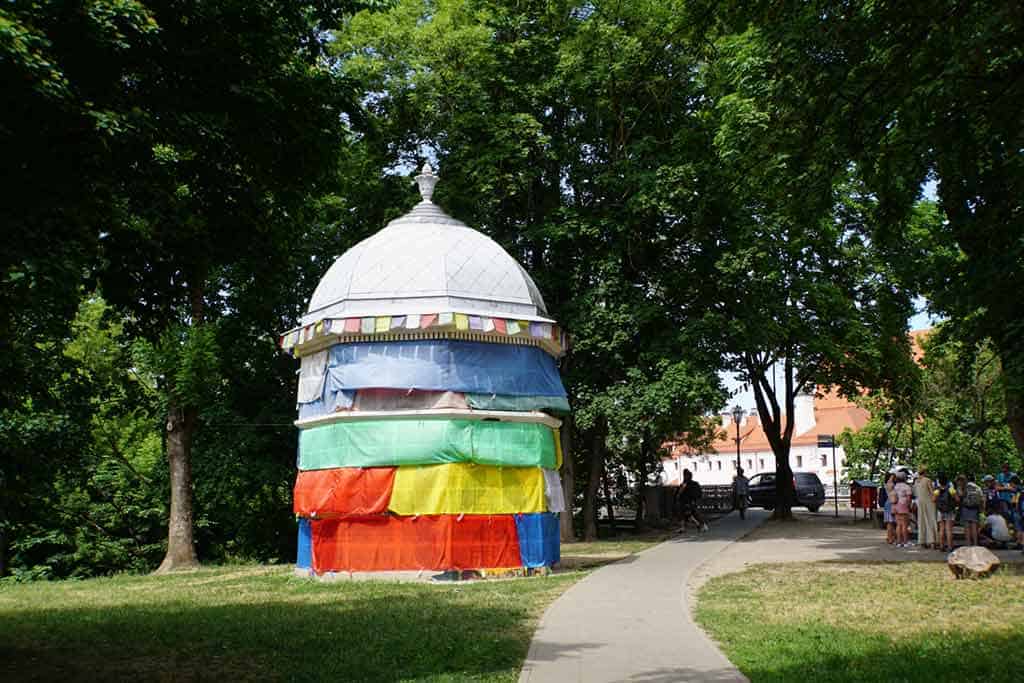 Uzupis is a neighborhood in Old Town Vilnius popular with artists, and home to a number of art galleries, workshops, and cafes. Uzupis means “on the other side of the river,” and is often compared to Montmartre for its bohemian atmosphere. It is very small and hemmed in by the river, steep hills, and a Soviet-era industrial area. Uzupis declared itself a republic on April Fools Day 1997 and celebrates its independence every April 1.

Town Hall Square is located at the far end of Pilies Street and is the traditional centre of markets and events in Vilnius. Dating back to the 15th century, the square has always had small shops and later traveling merchants. The city also hosts many events in the square, from ancient circuses to modern-day Christmas markets.

Like many other old European capitals, the Old Town of Vilnius is a lovely place to get lost in. The narrow winding streets date back centuries, there are plenty of shops and restaurants to relax at.

22. Trakai Island Castle Visit and Flight Over the Castle 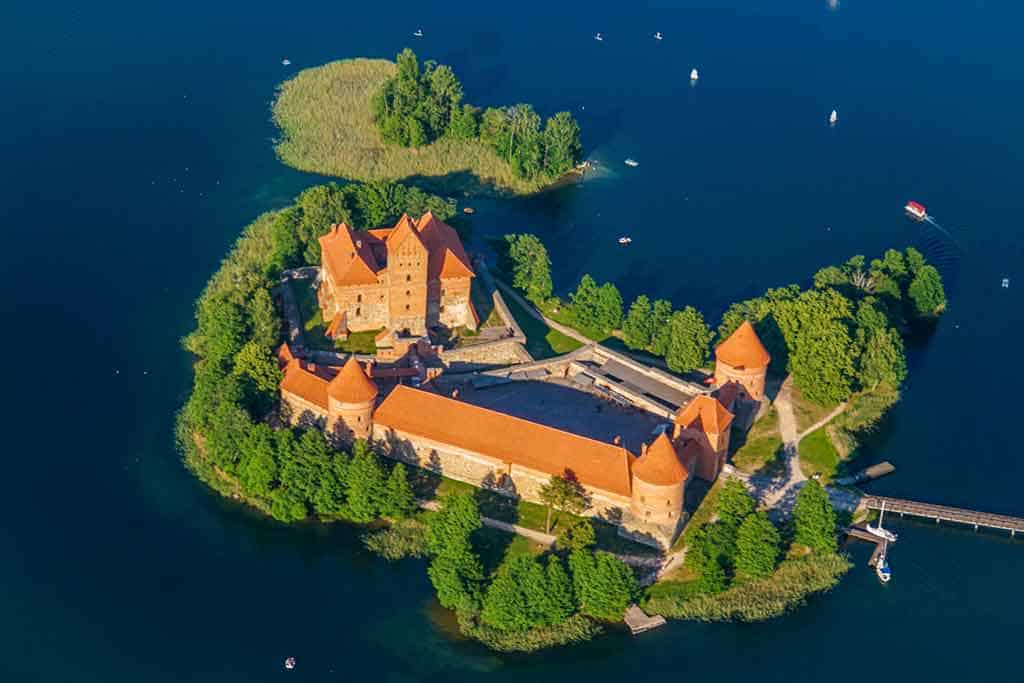 Trakai Island is located on Lake Galve, about 40 minutes from Vilnius. The castle is a beautiful 15th-century fortress, one of the best-preserved in the country. Take a flight over the castle and its fortifications, and enjoy panoramic views of the island, the lake, and the Lithuanian countryside. 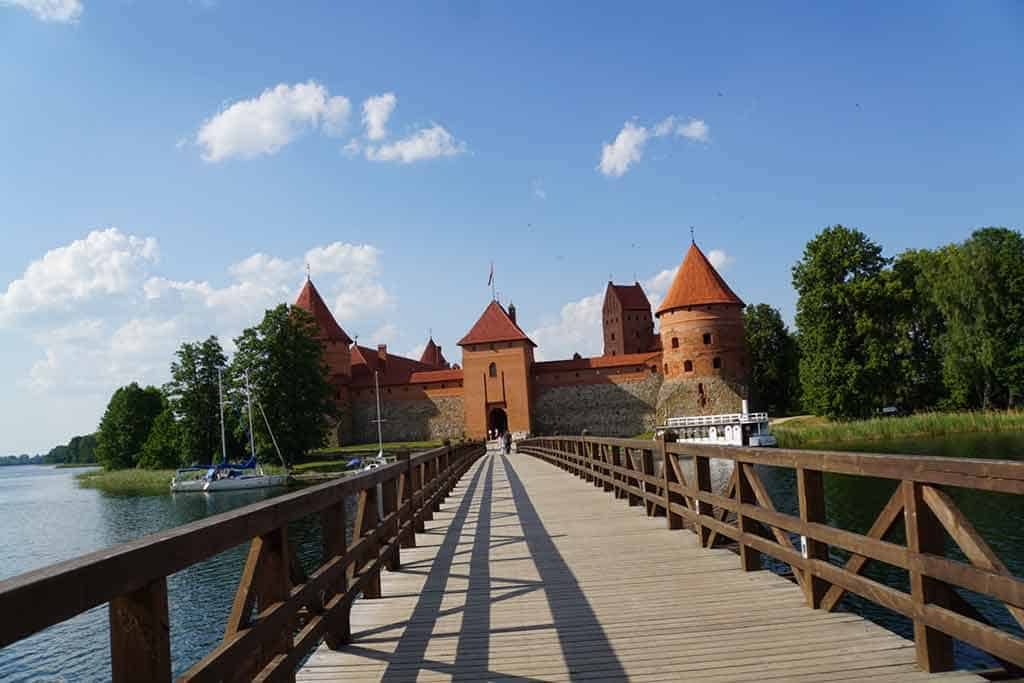 How to Get to and from the Airport of Vilnius

You can get into Vilnius from the airport very quickly and cheaply, as the airport is only 6 km from the city centre. A bus ticket only costs €1 while a train ticket is even less than that. A taxi is one of the least practical ways to get in – locals rarely take a taxi. If you choose to, never pay more than €10.

How to Get Around Vilnius

Vilnius is a really compact city. The best way to get around this beautiful city is by walking, however you can also find Uber or a standard city taxi. Between these two, Uber is your best choice.

Vilnius has a humid continental climate. Summers can be very hot and dry, with temperatures getting into the high 20s and 30s. In the winter, temperatures rarely go above freezing. The rivers often ice over in particularly cold winters; the lakes almost always are frozen over.

I really enjoyed visiting Vilnius. It is a charming and underrated Old World European capital with plenty to see and do. The surrounding area is beautiful and ancient, and the history of the country and city is impressive. Vilnius makes a wonderful addition to an eastern European itinerary or a short break from another, more crowded capital. 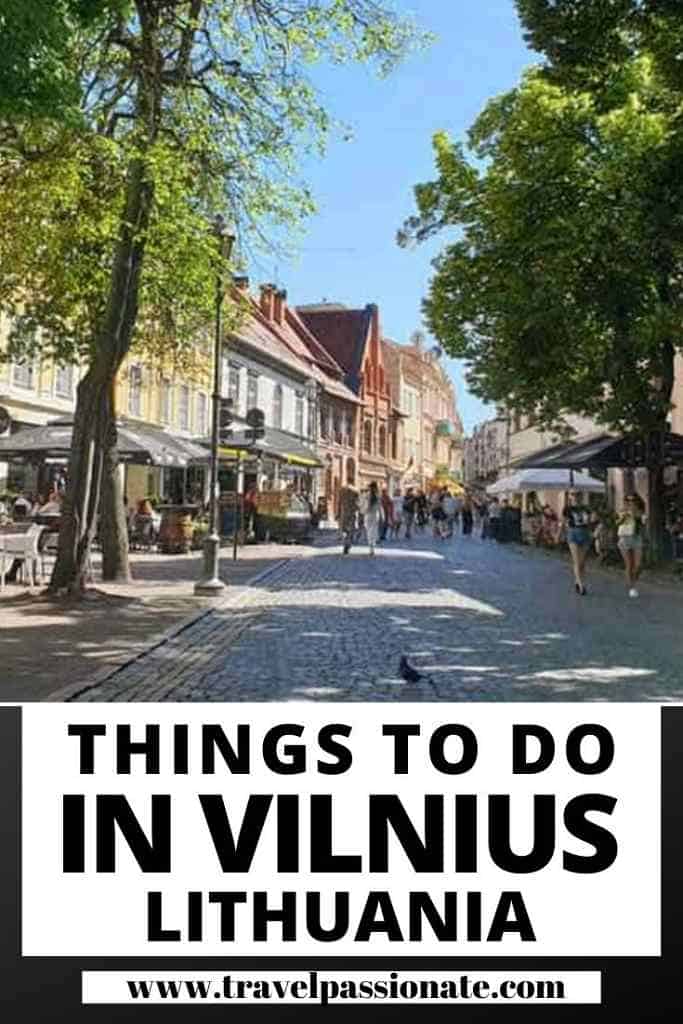