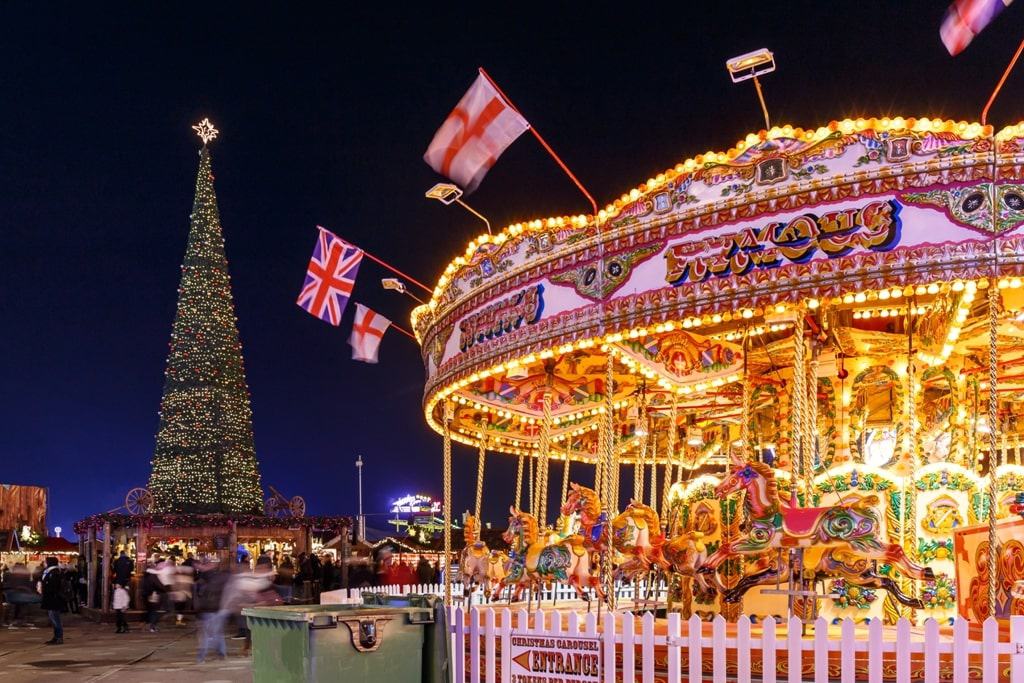 Unlike much of the rest of Europe, Christmas markets in the UK are a relatively new event, although this hasn’t prevented them from becoming enormously popular in recent years. The first Christmas markets to the UK came from Germany, and most markets still have a distinctly German influence, with glühwein and stollen firmly embedding themselves in British Christmas tradition.

Here we take a look at some of the best Christmas markets across the United Kingdom. Just remember, if you are planning a trip to any these, make sure to take your warm winter clothes and be prepared for rain, it is the UK after all.

Amazing Christmas markets in the Uk 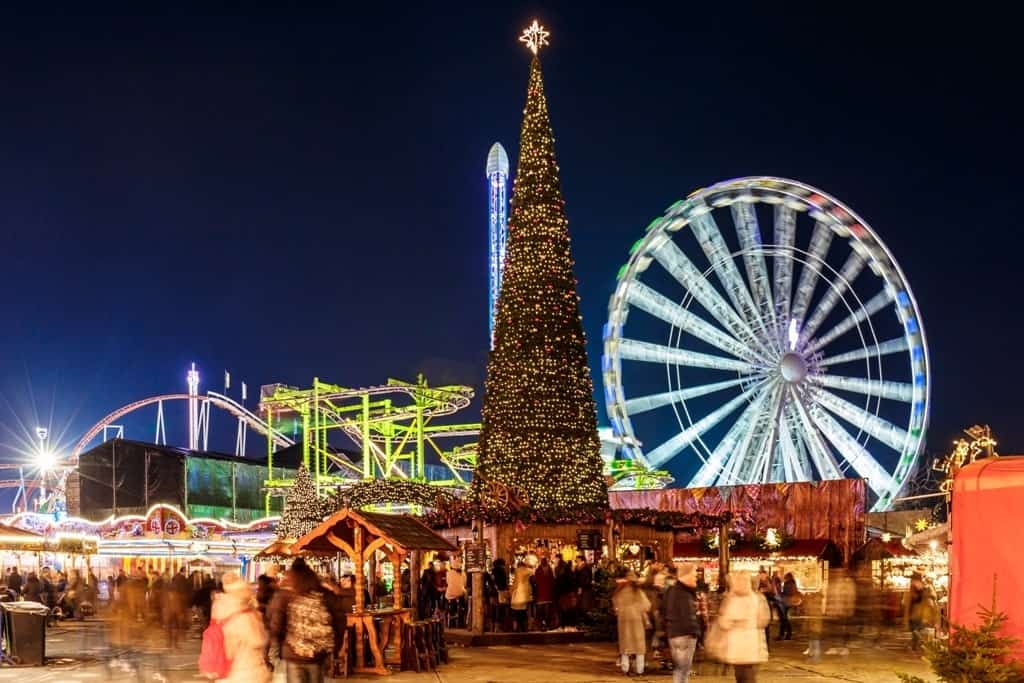 London has a wealth of Christmas markets and other festivities, but perhaps the most famous is Hyde Park’s Winter Wonderland. As well as the traditional market, Winter Wonderland offers a host of other attractions including the UK’s largest outdoor ice rink, ice skating shows, rollercoasters, Santa Land, circus shows, and much more.

While entrance to the market is free, many of the other attractions require tickets and as it can get very busy it is advisable to book in advance. If you fancy something a little more low key, then the Christmas Market on the Southbank is a good alternative. This Nordic-inspired market is the perfect way to enjoy some of London’s most famous sights while also getting a Christmas fix, and why not combine it with a trip on the London Eye.

You might also want to check this winter guide to London, with more things to do during Christmas time.

You might want to check my 7-day London itinerary. 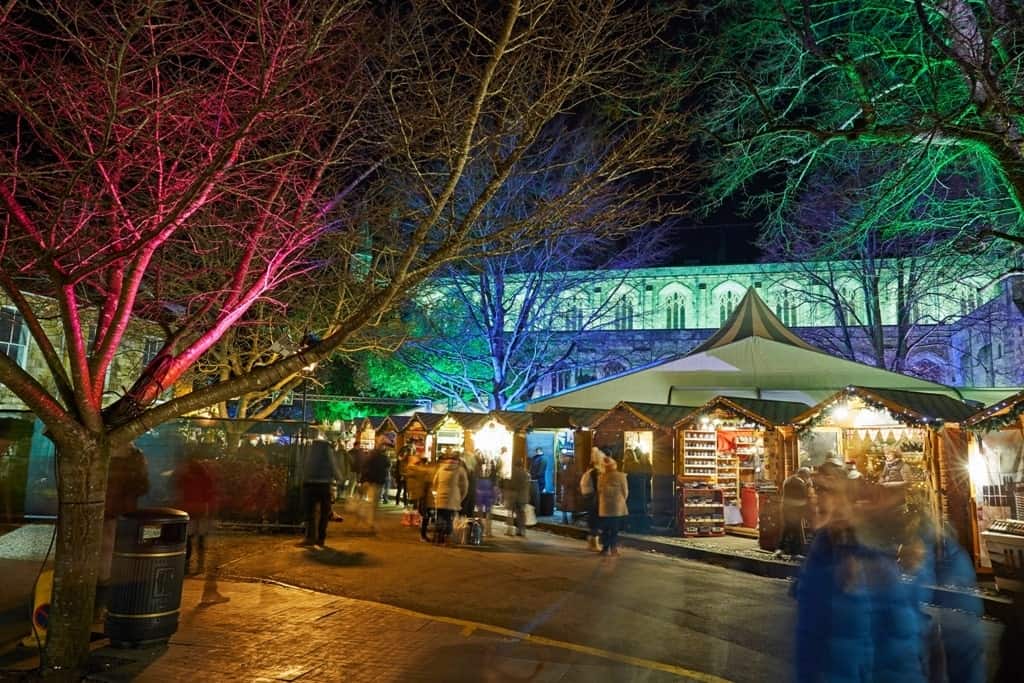 Winchester is known for its medieval cathedral, which is one of the largest in Europe and links to King Arthur and the Knights of the Round Table. Winchester also claims to be England’s Christmas capital, and it’s not hard to see why, with around 350,000 visitors every year and a reputation as one of Europe’s best Christmas markets. The market is set in Winchester Cathedral’s historic Close.

The 100+ stalls are individually selected by the cathedral’s in-house team, to ensure quality and a wide range of products. Although inspired by traditional German markets, the Winchester market has an emphasis on British products and there are many unique items for sale that you would not be able to buy on the high street. Aside from the market, the cathedral itself offers a great Christmas experience, with an enormous Christmas tree and regular carol services which everyone is welcome to join. 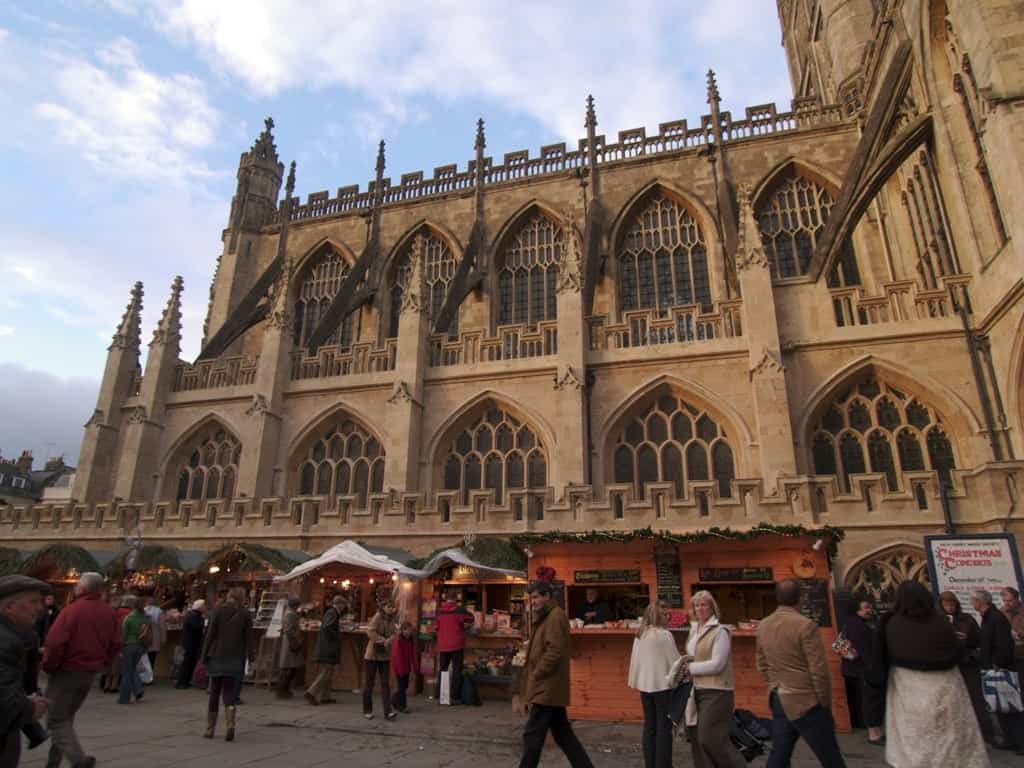 Thanks to its hot springs and Roman baths, the city has UNESCO World Heritage site status. Not quite as historic, but still worth a visit, Bath’s sprawling Christmas market spans several streets across the city center, including Bath-street, home of the Roman baths, and the streets surrounding Bath Abbey, noted for its Gothic architecture.

Bath Christmas market has been around for nearly 20 years and claims to be the UK’s favorite Christmas market, having previously won awards such as The Telegraph’s best Christmas market and The National Outdoor Association’s Event of the Year. The market prides itself on its local products, with 80% of its stallholders coming from Bath and the south-west, and 99% of the products handmade by the stallholders.

The 200+ stalls are all handpicked to ensure quality and variety. Bath market offers a range of clothes, jewelry, gifts, and health and beauty products as well as entertainment throughout, including choirs, Christmas carol singing, craft events and children’s festive story telling. 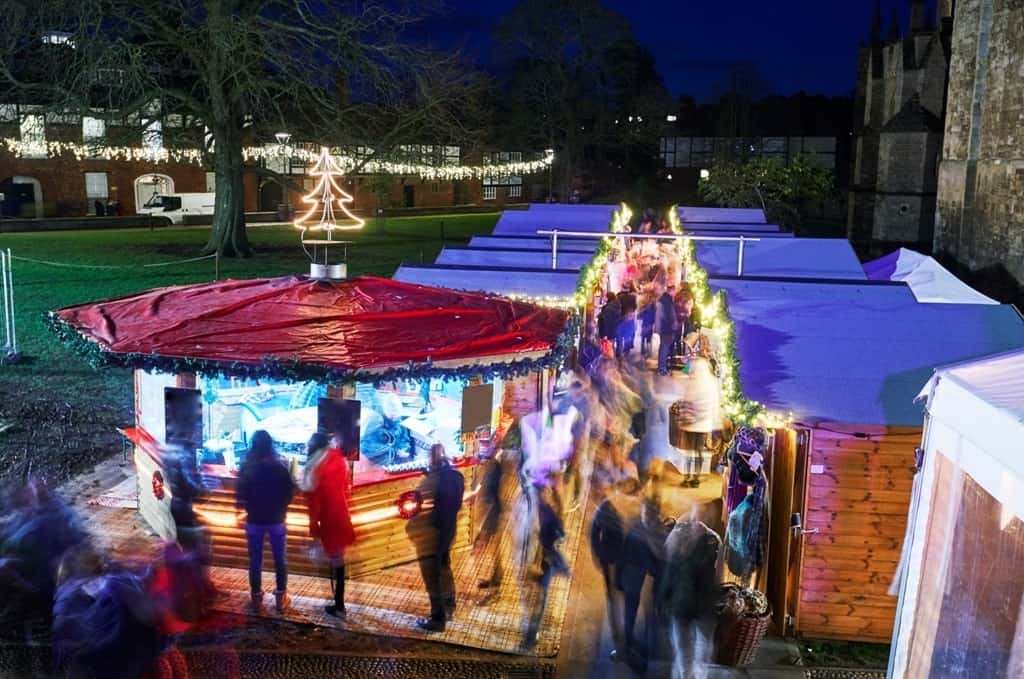 The Roman city of Exeter in south-west England is noted for its Roman-era city walls, an extraordinary network of underground medieval passages, and its cathedral, including the longest uninterrupted vaulted ceiling in England.

The Exeter Christmas market, located on the cathedral green, showcases products from both local and international traders as well as a bar offering mulled wine, continental beers and a wide selection of local drinks. For the hungry, there is a hog roast, crepes, Belgian chocolate, baklava and a range of specialty cheese and meats. Entertainment is provided by carol singers, choirs and local bands and musicians. 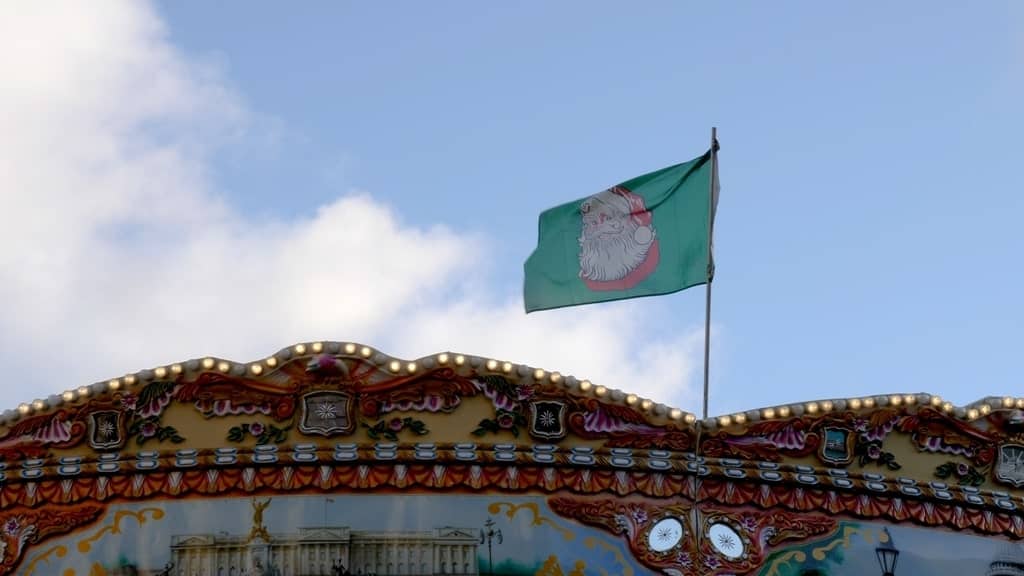 Birmingham is the second most populous city in the UK, has expanded rapidly during the industrial revolution. Boasting 5.5 million visitors each year, Birmingham Christmas market is the largest in the UK and the biggest German market outside of Germany and Austria. 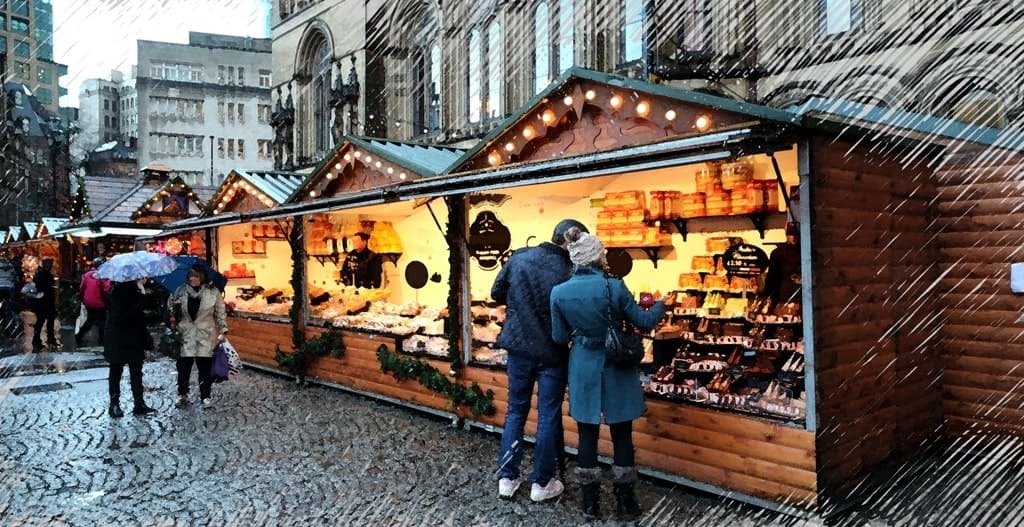 Founded in the first century by the Romans, but better known for its strong industrial history, the north-western English city of Manchester also hosts one of the biggest Christmas markets in Europe. Hotly anticipated by locals and tourists alike, the market sees millions of visitors each year, and frequently makes its way to the top of “Best Christmas market” polls.

The difference with Manchester Christmas market is that is spread across multiple sites in the city, each site having its own theme, meaning that the festive atmosphere radiates through the whole city. In addition to the 300+ stalls, the markets offer musical performances from well-known bands and DJs, an ice rink and a funfair. So pick up a Christmas market map and explore the city. 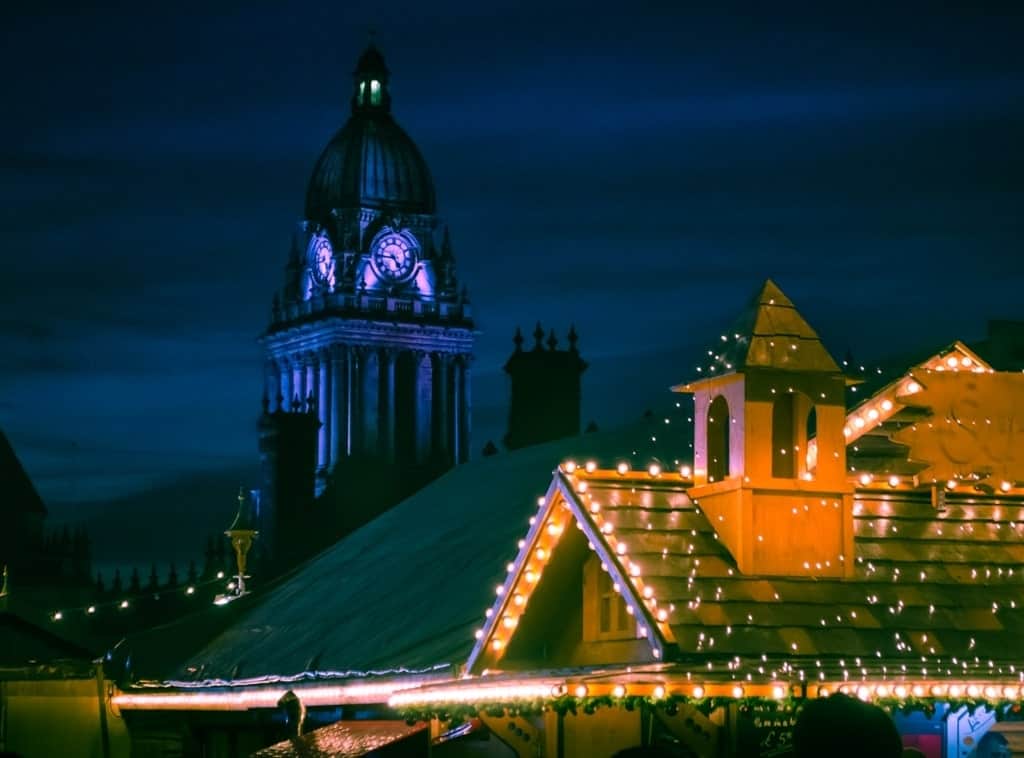 The northern industrial town of Leeds is one of the pioneers of Christmas markets in the UK, with Chriskindelmarkt, set in the award-winning Millennium Square. The market was established in 2002 in collaboration with Frankfurt’s city council, with records for the Frankfurt market dating back to 1393. 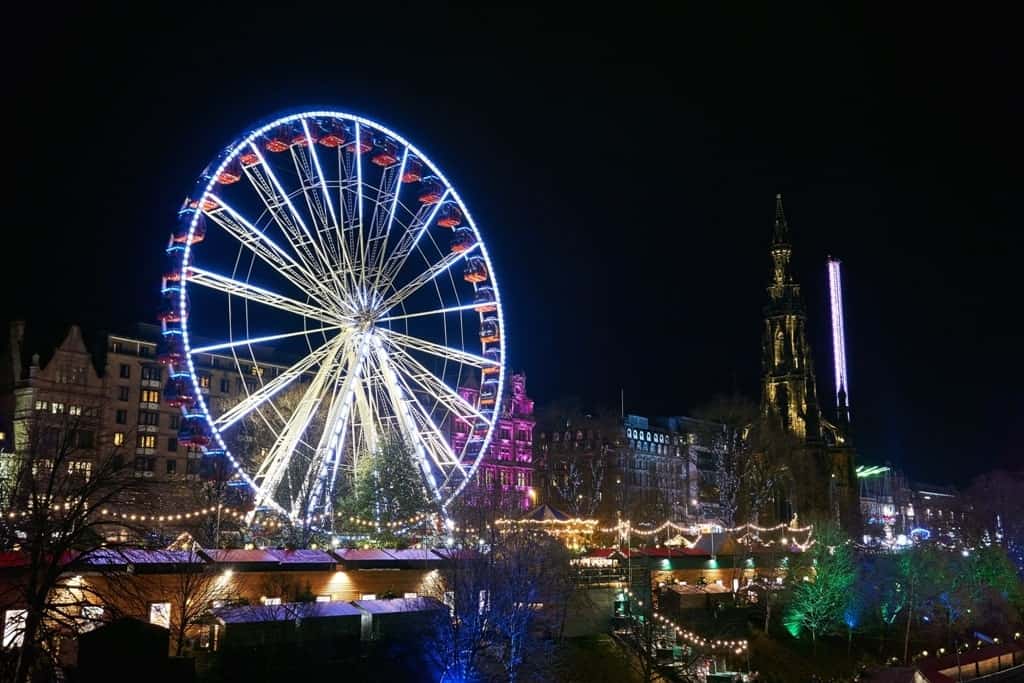 Scotland’s capital is beautiful at any time of year, with its combination of the medieval fortress in the Old Town and neoclassical New Town making it a UNESCO World Heritage site. At Christmas however, the city takes on a whole new life. Edinburgh’s Christmas festivities involve so much more than just the market.

The skyline is lit up with fair ground rides, such as the Big Wheel, the Star Flyer (which at 60 metres high offers fantastic views of the city) and a carousel. The city also boasts two ice rinks and Santa Land for children. The traditional European market has been running for over 20 years, while the Scottish market offers locally produced foods and crafts. If you’re impressed with the big deal that Edinburgh makes out of Christmas, don’t forget to stay for its new year’s Hogmanay celebrations. 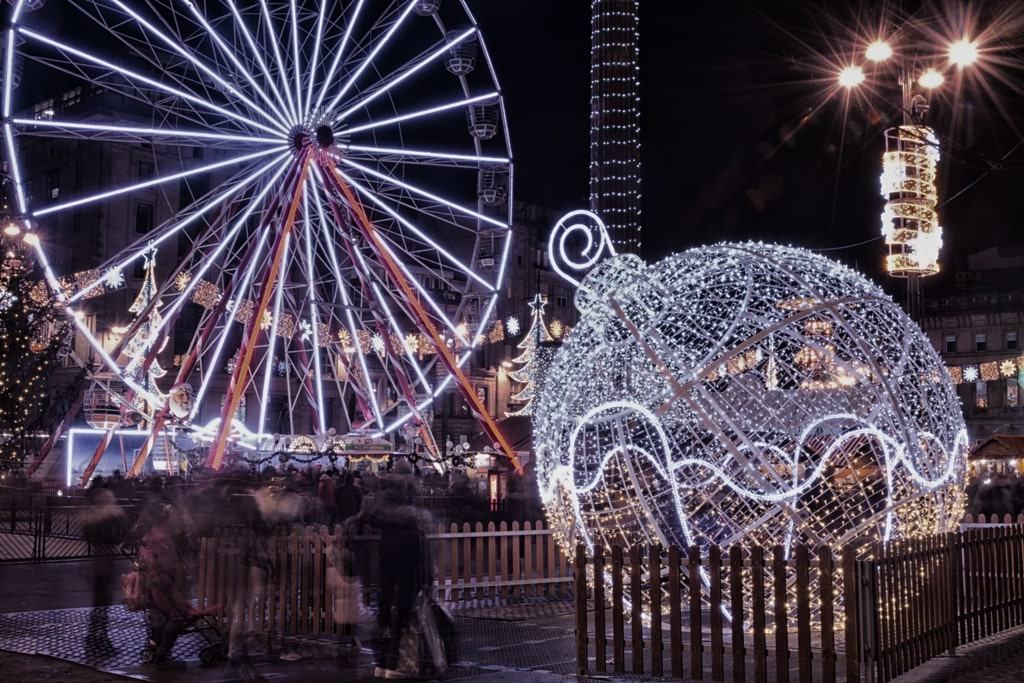 Glasgow is the largest city in Scotland and famed for its Victorian and Art Nouveau architecture and also has some of the best shopping in the UK on its Style Mile. There are two Christmas markets in Glasgow, as well as a series of other Christmas events, all part of the “Glasgow Loves Christmas” celebrations.

Both markets offer a wide variety of gifts and street food. In addition there is a carousel, big wheel and family-focused street entertainment. There is also an area for live music. Other Glasgow Christmas celebrations include the Style Mile Carnival and the 5k Santa dash. 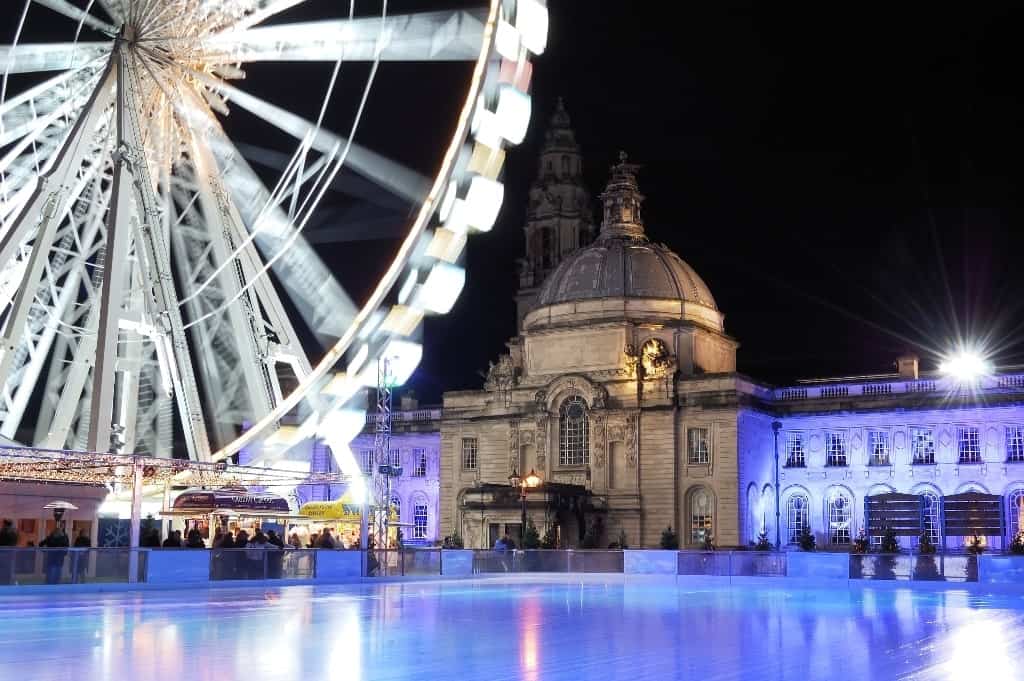 The capital city of Wales, Cardiff claims to be have the largest concentration of castles of any city in the world, with Cardiff Castle its most famous. It has also been holding its Christmas market since 1994. Somewhat differently to other UK Christmas markets, the focus here isn’t glühwein and bratwurst, but rather hand-made arts and crafts.

There are more than 80 stalls at Cardiff’s market, however some of these operate on a rolling basis, meaning there are many more stallholders over the duration of the market. Here you will find countless one-of-a-kind items, including local Welsh crafts and artwork. 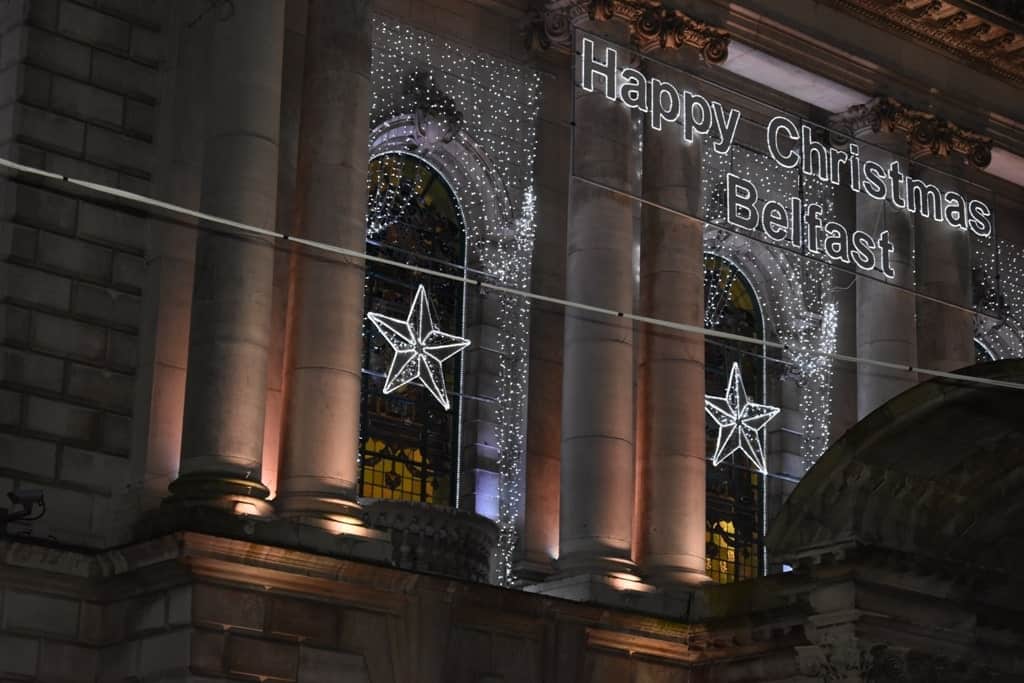 Northern Ireland’s capital has been hosting its Christmas market for around 15 years. Located by the City Hall, one of Belfast’s landmark buildings, this European themed market is the place to go if you’re looking to try out some new foods. The City Hall itself is centrally located and has beautiful gardens, which are transformed into a continental village during the Christmas period.

The Hall is lit up at night using the same technology as the Empire State Building in New York. Usually illuminated with white light, different colours are used for special events, and the result is one of the most impressive back drops for any of the UK’s Christmas markets.

The market boasts an exceptional range of foods including some of the best crepes in Europe, Italian nougat, Belgian chocolate, French tarts, Spanish paella and exotic meats such as alligator, impala, kangaroo and wild boar. There is of course also Gemrnan glühwein and bratwurst stands. Live music can be found at Lavery’s traditional Irish bar and there is a Santa’s grotto for families to enjoy.

You can also check out:

The best Christmas Markets in Germany.

The best Christmas Markets in Austria.

The best Christmas Markets in France.

The best cities in Europe for Christmas.