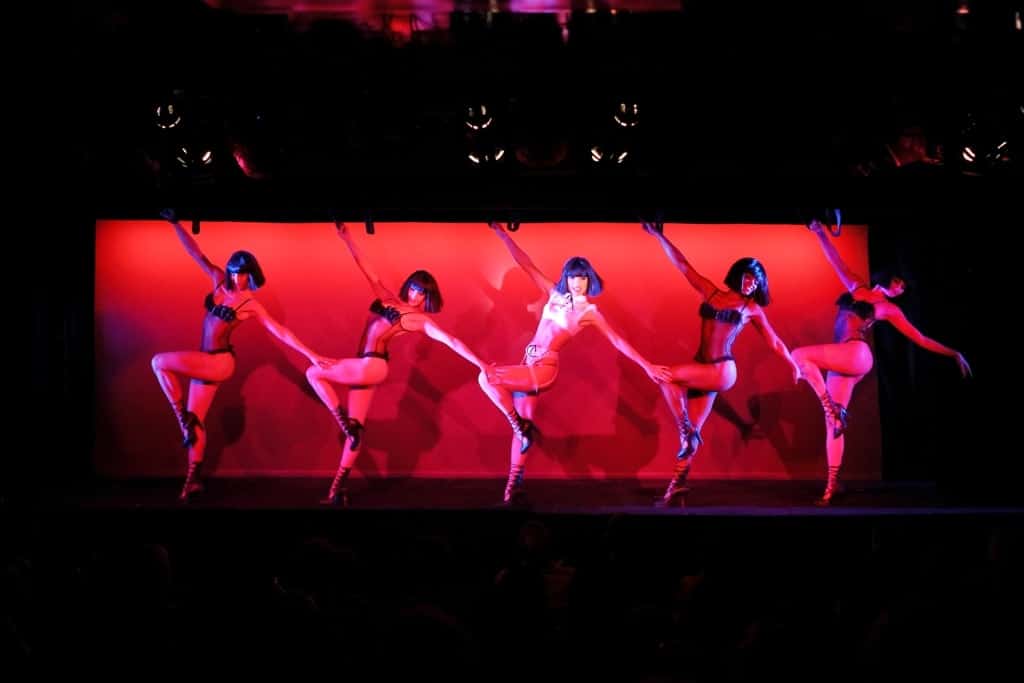 Paris is famous for its cabarets, so during my recent visit in Paris, we spent an evening at the Crazy Horse Cabaret, which is located in the 8th arrondissement near the Champs Elysees. The show was entitled Totally Crazy, and it is the current show running at this legendary cabaret. Because cabaret shows are famous with local Parisians and visitors alike, it’s recommended to book in advance to avoid disappointment.

History of the Crazy Horse

As the sexual revolution went on – into the 1960s and 1970s – the acts evolved and by the mid-1960s the Crazy Horse was a staple in Parisian nightlife. Bernardin’s children continued his work after his death in 1994, taking the show to Las Vegas, but sold it in the mid-2000s. The new owner, Andree Deissenberg, pledged to continue Bernardin’s legend while letting it evolve with the times. He invited famous names like Carmen Electra, Pamela Anderson, and Arielle Dombasle to join the shows. However, the most famous name at the Crazy Horse Paris is the sensual and alluring Dita von Teese.

In order to become a true Crazy Girl, as the dancers are known, there are strict requirements. These were set out by Alain Bernardin, the original owner, and have not been changed since! They must be a certain height and weight, and must have certain centimetres between their breasts and between their belly button and pubic area! Girls also must have classical ballet training and are put through a rigorous three to five month training program as well as their prior education. While this sounds laughable, it allows for a visual harmony on stage. All girls wear a particular styled wig and red lipstick as well.

Meeting these requirements alone won’t automatically get any one girl into the program; Alain Bernardin liked to say that they needed a “little something extra.” The Crazy Horse Paris also prefers girls with a little bit of acting experience, as they are comfortable with the stage and can perform a myriad of onstage acts!

Once they have completed the training and have performed onstage for the first time, they are given their nom de scene, or stage name. At the moment, there are 30 girls from 10 different countries, and some are involved in the international troupe which tours the world. As an average of 800 girls apply each year, these Crazy Girls are truly the elite in seductive burlesque dance.

Their costumes are exotic and elaborate as well. Each girl has at least six pairs of custom designed heels and costumes. The costumes take at least one week for a couturier to make, longer for the more elaborate costumes.

We booked a champagne package at the Crazy Horse Cabaret, which included reserved seating and half a bottle of Cuvee. They offer a variety of packages, which range from various seating (all reserved, regardless) to dinner and a show. Dinners are arranged at nearby restaurants as they do not serve full meals at the Crazy Horse. Bar snacks are available.

The show at the Crazy Horse is sexy, and contains nudity, but is not dirty. There is a minimum age of ten, and all guests under the age of eighteen must be accompanied by an adult. Seats are assigned by the maitre’d in advance so you do not need to wait in line for hours before the performance! Performances are twice an evening during the week and three times a night on weekends (except on special nights). Entertainment begins thirty minutes before the show.

In addition to the burlesque show, the Crazy Horse has long been a stage for other performers. These men are magicians, jugglers, mimes, ventriloquists, and more. They take the stage in between the main acts. During our show, we saw a comedian onstage. While the main show is sexy and sensual, he was funny!

Cabaret has long been one of Paris’s main entertainment, and spending an evening at one of the popular shows is a great way to kick off your Parisian vacation. The Crazy Horse has spawned tours across the world, namely Las Vegas and South Korea, and is by far the elite in the entertainment industry. We enjoyed our show very much and would recommend it to anyone on their trip to Paris!

*Please note that photography is not allowed in the show.