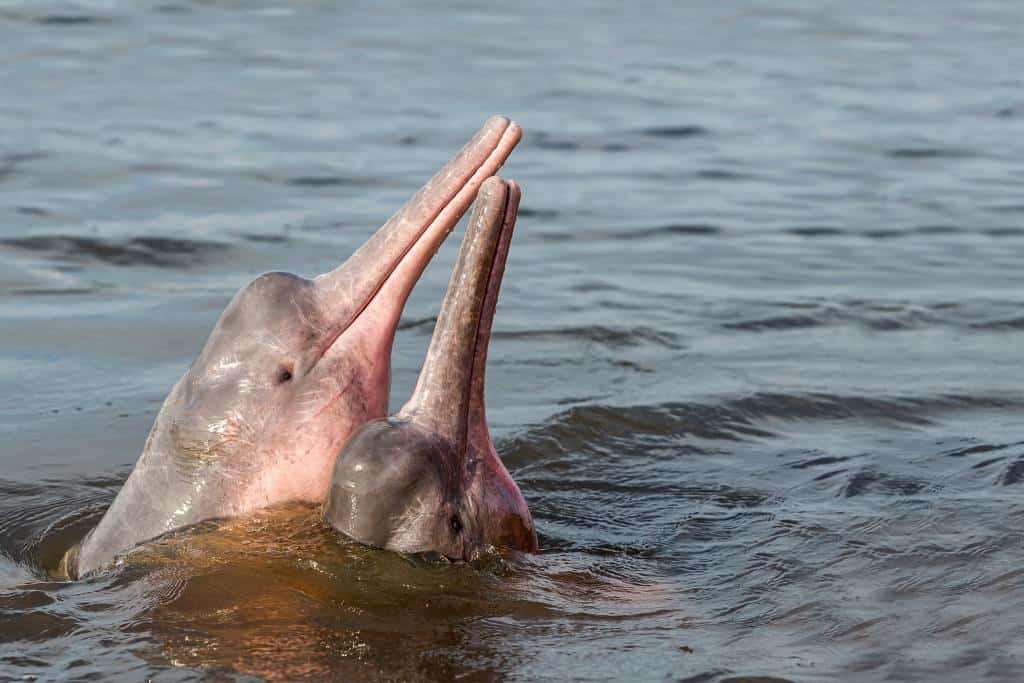 This article is from Mario, an Italian humanitarian and blogger that spent some months backpacking Brazil. He saw the pink river dolphin during his trip through the Amazon rainforest. If you understand Italian, you can find more on his article Viaggio in Amazzonia.

This is the question that I was asking myself before going on a long-awaited trip to the Amazon. They often come up on my crossword sessions, but I never saw one. Not even on tv. So, do pink dolphins exist?

I have to admit, I spent the beginning of my cruise on the Amazon River trying to spot them. Since we raised the anchor in Belém, I spent my time trying to spot what I thought was a rare pink dolphin.

The muddy waters of the lower Amazon River framed by the rainforest for as much as you can see are no spotting area for those weird mammals.

But then, as soon as I ended up in a tributary, there they were! Not hundreds of course, but I saw them.

At that point, I was already satisfied with the trip that had so much more to offer.

But we are here to speak about them, so let’s have a better look at these mammals and try to give an answer to one of the most obvious questions about them: why are Amazon river dolphins pink?

So, why is this river dolphin pink?

Let’s start saying that the inia geoffrensis is not the only dolphin in the Amazon River. Its cousin, the Tucuxi, is smaller and grey, fully grey so that you will not confuse each other.

The protagonists of this article are grey too, at least when they are born. This is why they are actually considered pink albino dolphins. With time shades of pink appear on their body. There are many reasons for this change, for example, what they eat and how much time they spend floating and exposed to solar light.

Their behaviour also contributes to the change, in particular their aggressivity. Indeed, due to their territorial fights, scars can contribute to the change in the skin.

A fun fact about the pink dolphin is that they blush. This is another reason for their colour shifting temporarily towards pink. I am still trying to understand how scientists realized that they were in front of a shy dolphin!

The pink dolphins in the Amazon rainforest are the most famous, even though you can see them in some more rivers. In this region of Brazil are particularly abundant in the tributaries of the main Amazon River, where the water is clearer and quieter.

Despite the appearances though, the environment endures a constant threat in the Amazon. Pink river dolphins are endangered animals and WWF is implementing programs to monitor them through drones.

The animals are known by the local population as boto Vermelho, “the red dolphin”: colours are always debatable!

Inia geoffrensis is instead the scientific name of the pink dolphin, Amazon’s most famous mammal. I must admit the boto Vermelho sounds much more pleasant.

These mammals can reach more than two metres of length and usually live three years. Luckily biologists realised that they do not live well in captivity and are rarely kept in aquariums: as if we needed science to understand this.

Pink dolphins have a higher brain activity than their sea counterparts. They have two brains and they are able to switch one off while they sleep so that they need less oxygen. I am sure we all know many humans who switch off their only brain, even when they are awake!

Another difference is that they rarely live in groups larger than four or five and it happens only at the mouth of the Amazon River or in very fishy areas.

One awesome fact about the pink dolphins is that their last vertebras are not welded as it usually happens in mammals. This peculiarity allows them to turn their neck for ninety degrees in each direction and easily navigate the Amazon River, full of trunks and debris alike.

To conclude, some bad news: Amazon River dolphin predators exist, despite their large size. Caimans, big snakes and also jaguars have been seen hunting swimming mammals. No one is safe in the Amazon. 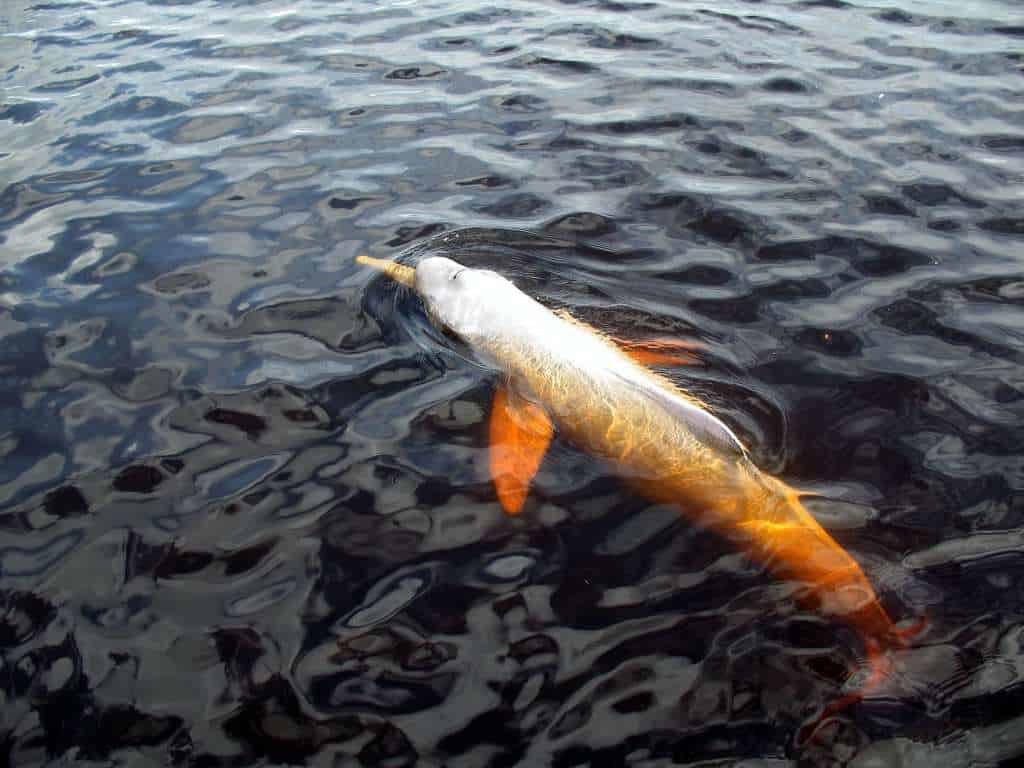 At the Ver-O-Peso market in Belém, you can find bottled genitals of the Amazon river dolphin. It is considered an aphrodisiac potion, but if I were you, I would find better ways to increase your sexual appetite.

Dolphins are renown to be very curious. The inia geoffrensis makes no difference. They are used to humans and boats and tend to swim very near to non-engine ones. If you are sailing at sunset on the Amazon River and you see pink dolphins swimming in your direction, turn off your engine and wait for them to pass by. With the fading light of the sun, their pink gets wonderful tones.

Could such a graceful animal not be romantic? No, of course. During the mating period, male dolphins bring little bundles of grass to their female counterparts. I am sure that you cannot say no to a pink dolphin bringing you a bunch of flowers!

The indigenous population of the Amazon developed many legends related to pink dolphins. Their colours must have always looked so weird that the animals ended up being part of every kind of myth. Many of these tales include dolphins becoming human, especially at night, creating every kind of problem to coastal villages.

In one of the most common myths, a dolphin transforms into a handsome guy who also happens to be one of the best dancers of the region. Two great skills to seduce young girls and abandon them jumping back into the water before dawn. That is why the dolphin is considered the father of all children who does not have one in the Amazon.

Even some human diseases are explained by the action of those mammals.

On Rio Tapajós sailors consider dolphins as their guardian. When a boat unluckily sinks during the rainy season, the fishermen will be saved by the dolphins who will carry them ashore safe and sound.

In general, as proof of how important nature is to humans, you will be hit by bad luck if you harm a dolphin. An ancient relation of respect between us and the earth that unfortunately some local politicians are nowadays forgetting.