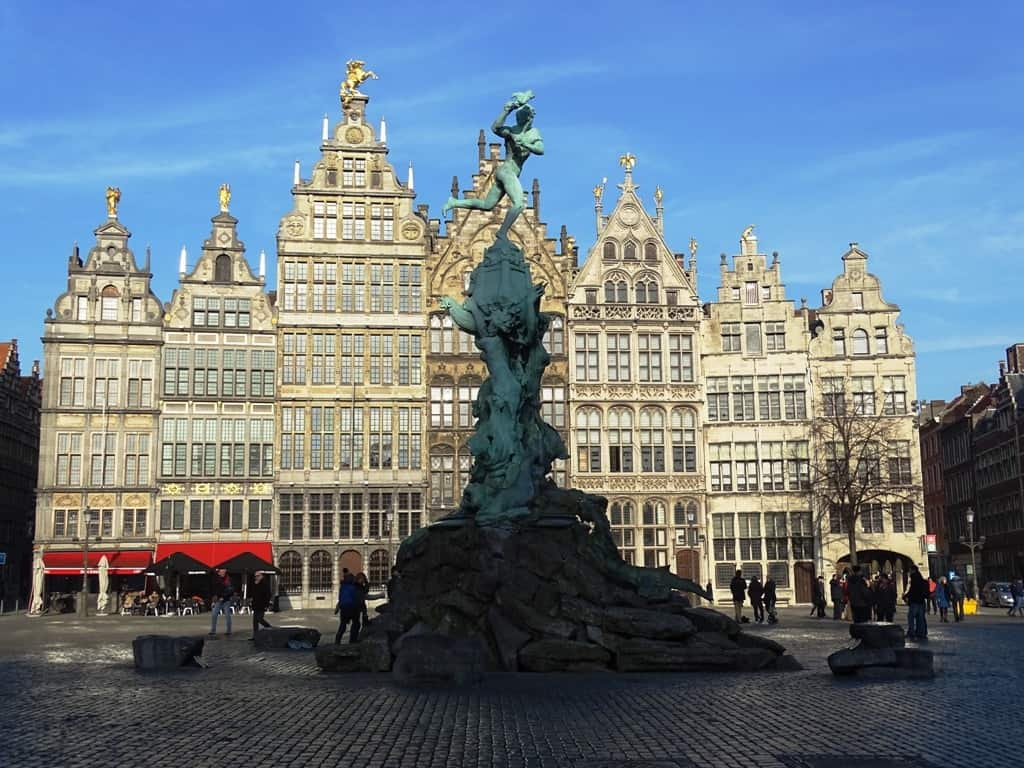 Antwerp is a buzzing portside city in the North of Belgium. It might not be the first choice for visitors traveling to Belgium, as some may think that Antwerp is a gloomy industrial port city but that is not the case. Antwerp is a beautiful city with a picturesque old town, great architecture, lots of art, the best shopping in Belgium, and first-class food.

If you only have one day in Antwerp I suggest that you see the following:

Things to do in Antwerp, in one day

The best way to arrive in Antwerp is by train; it also gives you the chance to admire Antwerp’s central station that is considered one of the most beautiful in the world. The station operates since 1905 and was transformed to its former glory in the late 19th century by Louis Delacenserie and Clément Van Bogaert. It cannot be defined to a particular architectural style as a lot of styles were used in its construction. The station has four levels, 2 of which are underground.

If you are traveling with kids, pay a visit to Antwerp’s zoo located close to the train station. It is the world’s oldest zoos and it has more than 5.000 animals and more than 950 species. More information: http://www.zooantwerpen.be/

Adjacent to the station is the Diamond district, after all, Antwerp is called the city of diamonds. Diamonds were being traded in Antwerp from the 15th century. On the 19th century, the city became a hub for diamond trade. About 84% percent of the world’s rough diamonds pass through Antwerp, and more than 1700 diamond companies are based here.

As you come out of the main central station and head towards the city centre, you will meet Meier Street, Antwerp’s main shopping street.  Meier is considered one of the most important shopping streets not only for Antwerp but the whole Belgium. Shoppers from all around Belgium and the neighbouring countries come here to shop. Shopping is one of the main things to do in Antwerp. Antwerp is also called the city of fashion apart from the many boutiques and designer shops it is home to the Flanders Fashion Institute (FFI), the Fashion Museum (MOMU) and the Fashion Academy. Apart from the shops, Meier street has many impressive buildings like the Royal Palace and the Stadsfeestzaal.

If you love shopping, Antwerp is the best place to shop. Most stores are open from Monday to Saturday, 10 am to 6 pm. On Sundays, you will find shops open mostly on Hoogstraat and Kloosterstraat. All the shops are open on the 1st Sunday of the month.

As you walk Meier street turn left before the Royal Palace and you will find yourself in Rubens House, one of Antwerp’s highlights. Here is where Rubens lived and worked from 1616 until his death in 1640. After his death, the new owners made considerable changes to the building until it was obtained by the city of Antwerp in 1937. The city restored many parts of the house to their former state.  The museum houses many paintings from Rubens and his pupils including works of Anthony Van Dyck.  A lot of furniture and other works of art from the 17th century are also on display. There is also a charming garden worth visiting.

Cathedral of our Lady

Antwerp’s Cathedral is the biggest gothic building in the Dutch -speaking world and has the tallest bell tower (123 m.) in Belgium. It took 169 years for the cathedral to be built, and it’s now a UNESCO heritage site. The cathedral is very impressive but what makes it so unique are the seven aisles and the four Ruben masterpieces that can be found inside it, along with other pieces of art. 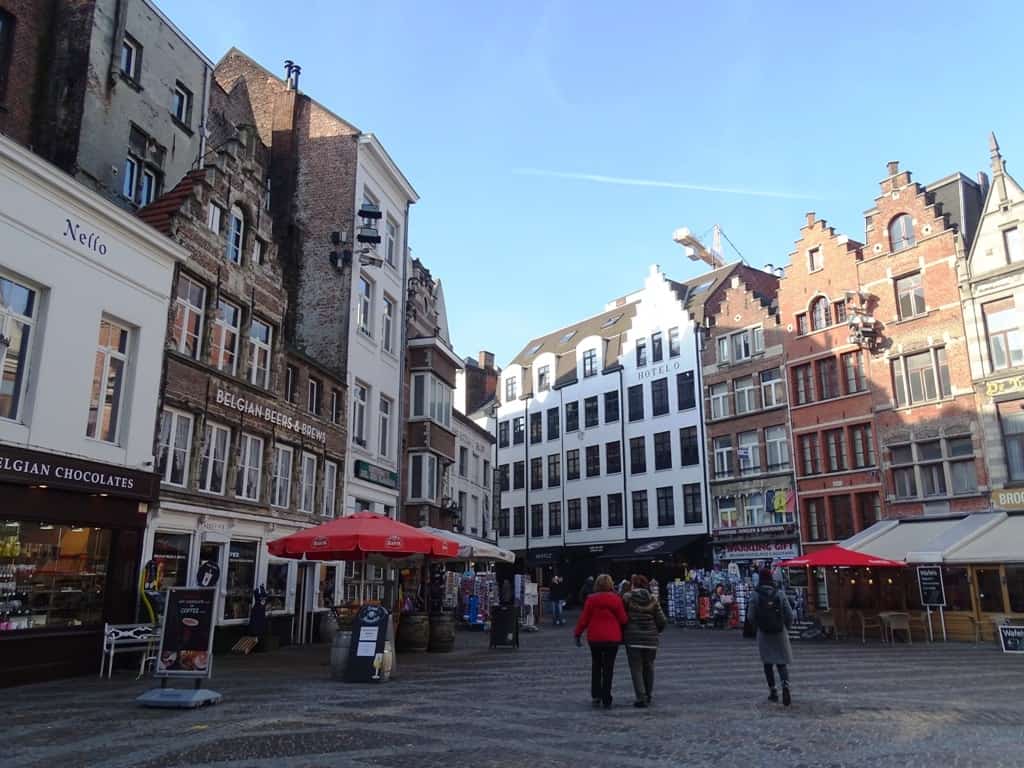 This buzzing square full of cafes and restaurants is located at Antwerp’s historical centre near the Cathedral. In the middle of the square stands the statue of the city’s most prominent residence Rubens.

The impressive building of the city hall (Stadhuis) built in Flemish Renaissance style dominates the square. Other famous buildings are the Houses of the Guilds that even though they were destroyed in a fire, they were restored to their original form. In the middle of the square is the Brabo fountain. According to the legend, there was a giant in the city that used to cut and throw the hands of the sailors into river Scheldt if they refused to pay a toll until Silvius Brabo killed it and threw his hand into the river. The fountain depicts Brabo as he throws the giant’s hand into the river. It is said that Antwerp owns its name to that story as Hand werpen means in Dutch “to throw a hand”. The symbol of the hand can be seen throughout the city. There are even biscuits sold with the hand shape.

Walk down Grote Markt, and you will find yourself at the banks of river Scheldt and the imposing Het Steen, a medieval fortress, dating from the 13th century. It is the first building made of stone in Antwerp and what stands today is only a small part of what it used to be.  In the past, the castle used to be a prison and until recently was part of the Maritime Museum.

We walked at the banks of river Scheldt until we arrived at the Mas Museum Aan de Stroom. On the way, we also saw the beautiful Pilotage, a public administration building built in 1895. The Mas is a new museum that tells the story of Antwerp in connection with the rest of the world. The museum has a collection of more than 470.000 items, but not all of them are on display. Some of them are kept on the second floor at the Visible Storage Area. Before you leave the museum, don’t forget to check the view from the top floor.

In front of the Museums, you will find 4 pavilions, very interesting to visit, the Diamond Pavilion, the Port Pavilion, the Silver Pavilion and the MASshop.

For opening times and more information you can check here: http://www.mas.be/en

Antwerp’s food scene has everything from Michelin-starred restaurants, seafood restaurants, bistros, beer houses and lively bars. Eating is one of the best things to do in Antwerp. Indulge in some waffles, Belgian chocolates, Moules Frites and Belgian Beers among other specialities. For more inspiration have a look here: http://www.visitantwerpen.be/en/food-drinks

Another great option is a food tour around the historic town of Antwerp.

Antwerp is such a fascinating city with many things to do and see. Unfortunately, my time there was short, but if I were there for more days I would have visited:

Where to stay in Antwerp

We stayed at the Lindner Hotel and City Lounge, a modern hotel very centrally located next to the train station. Our room had all the amenities you would expect from a 4-star hotel, including Wi- Fi, air conditioning, safe, and toiletries. Everything was very clean and the bed was very comfortable. The highlight of our stay was the amazing breakfast buffet and the friendly and helpful staff.

Check out the latest prices and book The Lindner Hotel and City Lounge here.

Other great choices include:

The Hotel Julien is near to many attractions like Groenplaats Square, Antwerp Cathedral, and the De Meir shopping street. It’s spa is located in the 16th century cellar, but the rest of the hotel is delightfully modern. Rooms are spacious and equipped with an ensuite bathroom and a variety of seating options. Do not forget to enjoy the common spaces, like library and terrace, or roof terrace and bar.

Check out the latest prices and book Hotel Julien here.

The Hotel De Witte Lelie is in the same area, 8 minutes from Groenplaats and 5 from the Grote Markt. This small, luxury boutique hotel is tastefully decorated with comfortable, modern furnishings in a historic building.

The nearby Hotel Rubens, a one minute walk from the Grote Markt, offers spacious rooms with large windows. The light and airy rooms are great for couples, or even families as the beds are large. Weather permitting, the hotel breakfast is served on the 16th century tower.

Check out the latest prices and book Hotel Rubens here.

I had a really hard time choosing the photos for this post as Antwerp is so photogenic and I took hundreds of photographs in one day. If you are visiting Belgium, I highly suggest that you put Antwerp on your itinerary.

Have you ever been to Antwerp? What did you enjoy the most? What were your favorite things to do in Antwerp?

I was a guest of Visit Antwerp and Visit Flanders. As always, my opinion expressed here is entirely my own.

8 thoughts on “One day in Antwerp, Belgium: Things to Do and See”