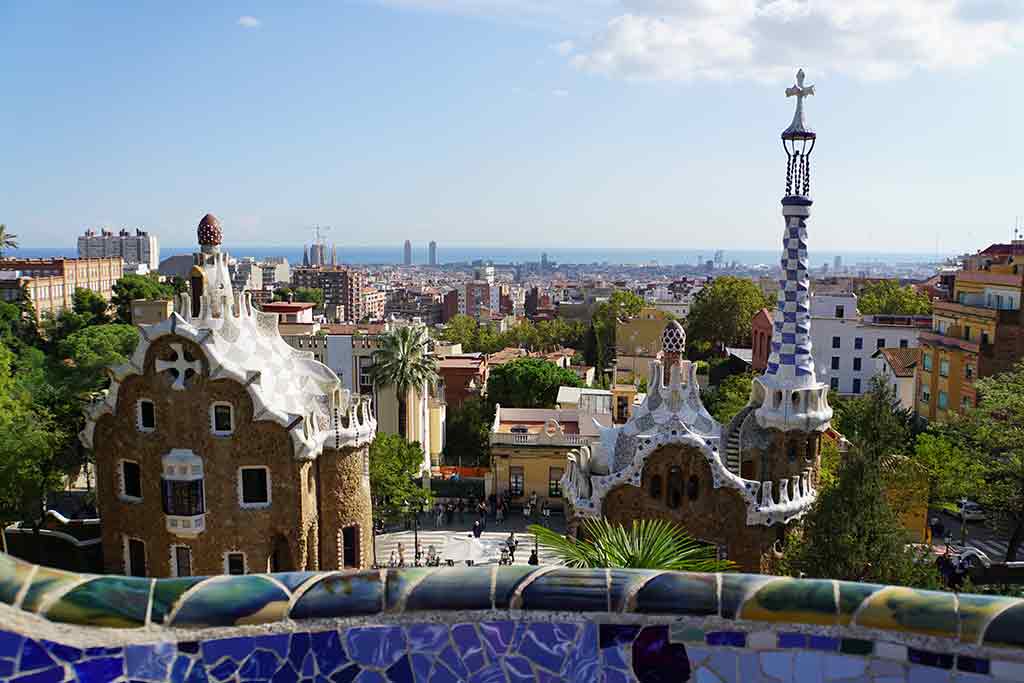 Planning to spend 2 days in Barcelona, and looking to see as much as possible? There are so many things to see and do around the city.. This 2-day itinerary will help you make the most out of your stay in Barcelona.

Barcelona, Spain, the capital of Catalonia (Catalunya in Catalan), is one of the most exciting, bustling cities of Europe. Located on the coast of northern Spain, just south of the Costa Brava, Barcelona is the largest city in Catalonia and the second largest in Spain.

Divided into districts, and then neighborhoods, Barcelona grew out of the early Ciutat Vella, which includes the Gothic Quarter, where Roman ruins are still visible today, and Barceloneta, which is famous for its fish shops.

Barcelona is also a sunny, beach-loving city with a rich history, incredible food and wine, and plenty of great shopping. It is known as the Modernist City, named for the number of unique architecture by Antoni Gaudi and Luis Domènech I Montaner, two rival architects from the turn of the 20th century.

Tip: Barcelona is a big city get around comfortably with a 2, 3, 4, or 5-day public transport ticket.

2 Days in Barcelona – Day One

Spend today in Barcelona’s original district, Ciutat Vella, where you can wander the narrow winding streets of the El Gotic and El Raval neighborhoods, walk the wide Las Ramblas, taste test your way through La Boqueria, and experience several museums that introduce you to some of Barcelona’s most famous residents.

Plaça Catalunya, one of Barcelona’s most central plazas, is often full of people. It is a major metro and train connection as well as the crossroads of the city. The Passeig de Gracia and Gran Via de Les Corts Catalanes intersect near Plaça Catalunya while many other major roads meet here, including Las Ramblas. The square celebrates Catalan history and people, with four statues representing the four capital cities of Catalonia and one commemorating Francesc Macia, president of Catalunya.

Las Ramblas is one of the major pedestrian streets in Barcelona. It is a wide street lined with trees and is the unofficial meeting place for locals and tourists who want to take a stroll. Because La Rambla is 1.2 kilometers long, and it follows the contours of the medieval city walls, making it one of the straightest streets among the winding lanes of the old gothic city. Today, Las Ramblas is lined with street artists, tourist shops, cafes and bars, and some of Barcelona’s most famous buildings, including Gran Teatre de Liceu and the Columbus Monument.

La Boqueria is Barcelona’s premier market and one of the oldest in the city with a market on this site as far back as the 1200s, even though the current building wasn’t opened until the 1850s.  The market has a wide selection of fruits, meat, cheese, bread, sweets, and more.

Even if you don’t plan to shop for groceries at the market, it is worth going to La Boqueria for the colorful stalls and aromas that waft through the building. There are also eateries scattered through the market for those who want to enjoy a glass of wine or sandwiches while there. The market also has some great snacks for vegans. For even more options, you can check the vegan guide to Barcelona.

Plaça Reial is a beautifully porticoed square in the heart of the city, one of Barcelona’s busiest squares, especially at night. There are several fountains and palm trees that lend an air of elegance to the square. It is a popular place for locals to go in the evening, as the porticoes hide any number of tapas and wine bars. The square is surrounded by beautiful houses, once owned by the noble families of Barcelona but now are slightly more bohemian. Barcelona’s most popular nightclubs are also located within Plaça Reial.

The Cathedral of the Holy Cross and Saint Eulalia, located at Cathedral Square in the Gothic Quarter, is the seat of the Archbishop of Barcelona. It was built on the foundations of the early Christian church and the Romanesque Cathedral in the 13th century. The cathedral houses the relics of Saint Eulalia, the patron saint of Barcelona.

Barcelona’s Gothic Quarter – El Barri Gotic – is the early Roman city, and these remnants are still to be found in the narrow winding streets of the neighborhood. Many of the streets are pedestrian-only, and the Gothic Quarter, with its beautiful architecture, charming stone buildings, and lovely squares is considered one of the most interesting parts of the city.

The Palau de la Musica Catalana is one of Barcelona’s most modernist buildings, designed in the early 1900s by Gaudi’s rival Luis Domènech I Montaner. With its mosaics, sculptures, stained glass, and wrought iron, it is considered as the “building that epitomizes Catalan art nouveau,” and has been a UNESCO World Heritage Site since 1997, along with his other famous building, the Hospital Sant Pau. Palau is still an operating music hall, and you can purchase tickets for a show at the box office.

The Museu de Picasso highlights the early years of Picasso and houses more than 4,000 pieces of his artwork. Many of these pieces were donated by Picasso himself. You’ll see works from his early years as a student, his famous Blue Period, and from his years of living in Barcelona. It is located in the Born district, one of the trendiest neighborhoods in Barcelona.

If you are a fan of Picasso you can check the Picasso Walking Tour & Picasso Museum of Barcelona.

Spend today visiting the architectural marvels of Antoni Gaudi, who is likely Barcelona’s most famous resident. He is most well known for the Sagrada Familia, the cathedral which has been under construction since 1882, and is the person – along with his rival Domenech – for whom Barcelona is called the Modernist City.

Casa Mila is one of Barcelona’s most recognizable buildings. Located on Passeig de Gracia, and also known as the Stone Quarry or La Pedrera, Casa Mila is the last private residence designed by Antoni Gaudi. Its facade is most unusual, with an undulating stone front, wrought-iron balconies, and rooftop terrace. The building was originally divided into apartments, but today is a department store and tourist attraction.

Casa Batllo is a redesigned residence on the Passeig de Gracia, within the Block of Discord, in the center of Barcelona. It was designed by Antoni Gaudi and is locally known as the Casa dels Ossos, of the house of bones, for its skeletal organic quality. The building was originally built in 1877; the owners hired Gaudi to redesign the building in 1904. Today, the house is open to the public and – along with its neighboring houses and the other Gaudi works – is a UNESCO World Heritage Site.

Click here to book your skip the line tickets to Casa Batllo.

Sagrada Familia, under construction since 1882, is Barcelona’s most recognizable structure, and only about two-thirds completed as we speak today in 2019. When finished, the basilica (for it is not a cathedral) will have eighteen spires, seven chapels, and three portals.

The facades are the Nativity Facade, the Passion Facade, and the Glory facade. Each is exquisitely adorned with sculptures, and because none were completed while Gaudi was alive, none are done to his exact instructions. Sagrada Familia is one of Barcelona’s signature attractions and tickets cannot be purchased on arrival, so your visit must be planned in advance.

Click here to book your skip the line tickets to the Sagrada Familia.

The Park Guell is a public park on the northern edge of Barcelona, in the Gracia district. It is another of Antoni Gaudi’s designs. There is a lot of symbolism within the park’s designs, from concepts originating within the political Catalanism to mythological elements. 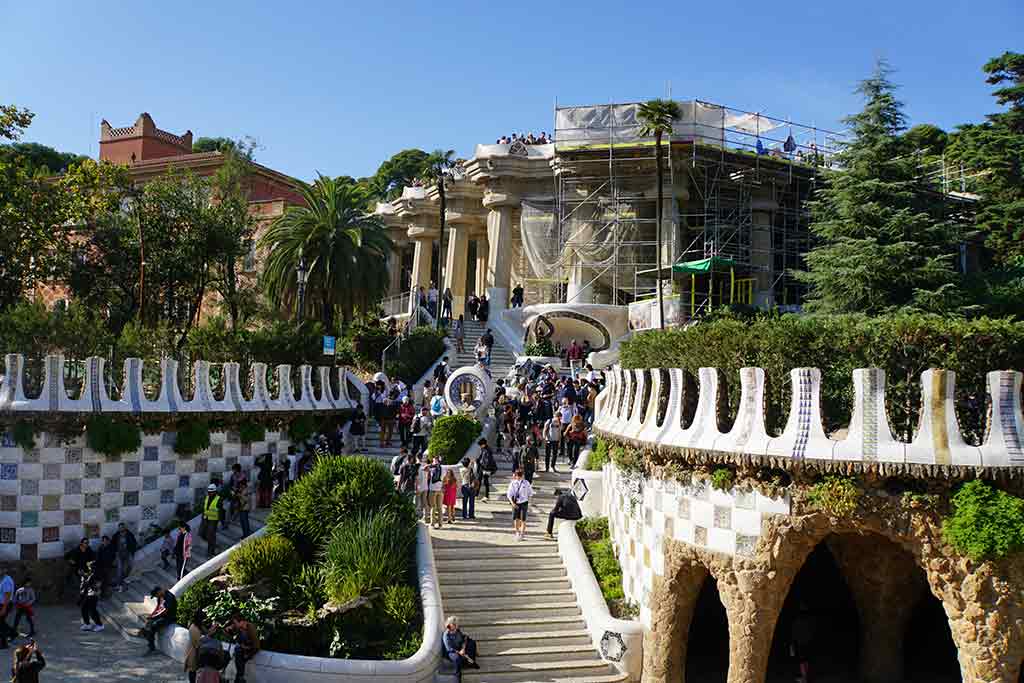 It is said that Gaudi was inspired by the Temple of Apollo at Delphi. The park itself is free to visit, but if you want to visit the mosaics and terraces, or Gaudi’s house which is located within the park, you must pay separate fees.

Click here to book your skip the line tickets to Parl Guell.

How to Get To and From the Airport

Barcelona’s airport, known as El Prat, is about 12km from the city. Depending on traffic, it can take 20-40 minutes to get into the city center from the airport. There are several ways to get into the city. We used Welcome Pick Ups, which offers a personal, private driver from the airport to the hotel at a flat fee that is comparable to a taxi. All drivers for Welcome Pick Ups must pass an English test, and will monitor your flights in case of delays.

Other ways to get into the city from the airport include the train, metro, taxi or private car, or bus. The train leaves every 30 minutes from Barcelona Sants Estació train station or Passeig de Gracia and arrives at Terminal 2. If you are flying from Terminal 1 you will need to take a free shuttle bus from Terminal 2 (10-15 minutes). The metro connects both terminals to the city, as does the Aerobus. Both are fast, inexpensive ways to get into the city. A taxi will cost €20-30 depending on the time of day and traffic, while a private driver could be quite expensive.

Where to stay in Barcelona

Petit Palace Boqueria Garden: Situated right in the Boqueria of Barcelona, one of the most important monuments of the city, the Petit Palace Opera Garden is a gorgeous hotel with all the amenities needed and a central location. It’s simple, beautiful, and has a genuine atmosphere to it. Click here for more information and to check the latest prices.

Hotel Barcelona Catedral Elegance is seen in every nook and cranny of this hotel – only 15 minutes walking from the beach, the hotel offers incredible free walking tours around the city, rooftop terraces, and is a one minute walk away from the cathedral. Giving it the perfect blend of both modern and old. Click here for more information and to check the latest prices.

Barcelona is a fast, vibrant city with plenty of incredible museums, beautiful neighborhoods, and streets full of cafes, bars, and shops. Its rich history – from pre-Roman times to modern-day – enchants first-time visitors through architecture and cultural influences while its thriving cultural and food scene enriches everyone. Two days in Barcelona is enough time to experience this amazing city, and I’m confident you will want to return.

You might also want to check out my other Spanish guides:

How to spend 10 days in Spain – an itinerary that includes Barcelona.

How to spend 7 days in Spain – and itinerary that includes Barcelona.

The best day trips from Barcelona.

How to spend 2 days in Madrid

How to spend 3 days in Madrid