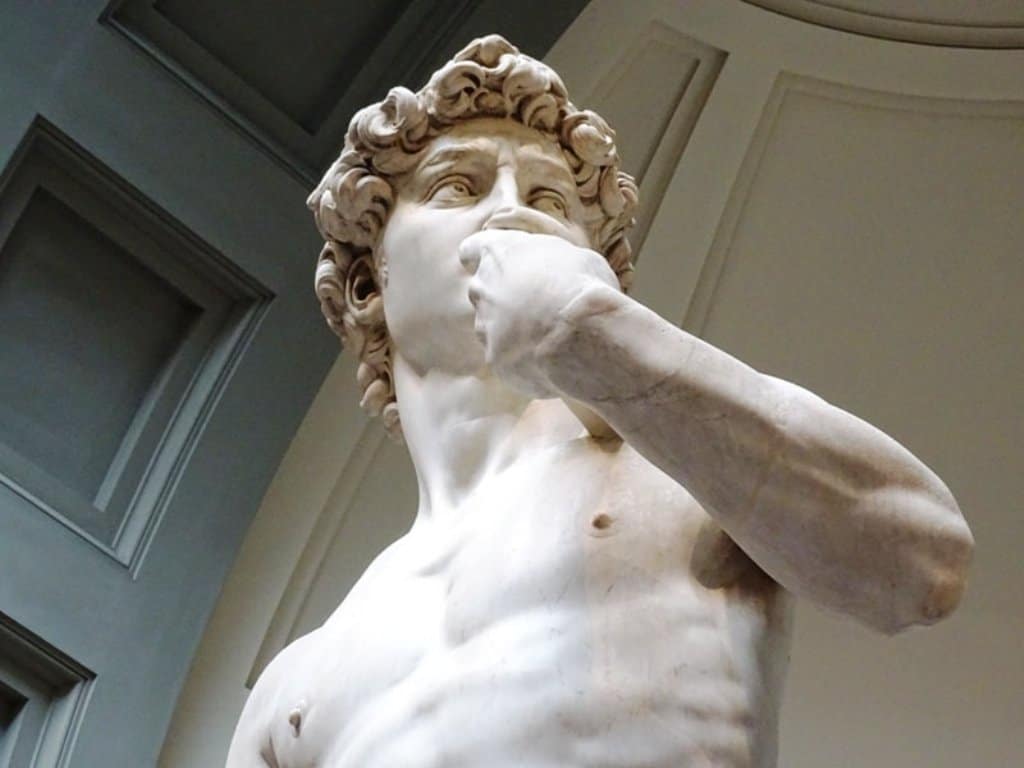 Italian artistic heritage is made of architecture, painting, and sculpture and every city or town is literally full of statues in different styles made with different materials and coming from different times! Let’s discover a non-exhaustive list of Italian statues that surely deserve a second look!

The most famous Italian statues you cannot miss are:

Artist: unknown. The twins were later added by Antonio del Pollaiolo
Where to see it: Capitoline Museums– Rome

About: scholars thought it dated back to the Imperial era, but more recent studies found out it actually dates back to the Middle Ages. The twins were only added in the XV century. The statue represents the foundation myth of Rome: Romolo and Remo were the twin sons of god Mars and the priestess Rhea Silva and they were abandoned in the forest to save them from the rage of their uncle who did not want them to become the legitimate heirs to the throne. A she-wolf found and raised them, so they survived and grew up. Once adults, Romolo founded the city of Rome after having killed his brother.

Artist: Michelangelo
Where to see it: Accademia Gallery – Florence

About: it was made of white Carrara marble between 1501 and 1504. It’s really huge: 5m high and 5 tons of weight! It was initially placed in Piazza della Signoria, right at the entrance of Palazzo Vecchio, to symbolize the Republican power (the young man holds a slingshot with an expression of defiance). Now you can see a copy standing in the square, while you shall visit the Accademia Gallery to see the original statue.

Artist: Michelangelo
Where to see it: St. Peter’s Basilica – Rome

About: it was made between 1497 and 1499 by young Michelangelo (he was probably 24 at that time) and it’s the only work he ever signed! It represents the Virgin Mary holding Christ’s body after his death, which was a common subject in funerary art during the Renaissance. It is one of the most famous statues in the world and it’s now protected by thick glass following an act of vandalism in 1972.

Artist: Giuseppe Perego
Where to see it: Spire of Milan’s Cathedral

About: it’s been the symbol of Milan since 1774 when it was placed on the highest tip of the Cathedral’s spires. This statue of the Virgin Mary has always been protecting the city from above and no new building nor skyscraper can be higher than that (108m)! To “solve the problem”, architects are used to placing a copy of the statue on top of every new skyscraper.

Artist: Michelangelo
Where to see it: Basilica of S. Pietro in Vincoli – Rome

About: it was made between 1513 and 1515 and it’s considered one of the main masterpieces of Italian art. It was commissioned to Michelangelo as an ornament for the tomb of Pope Giulio II and it represents Moses holding the Tablets of the Law. Legend has it that Michelangelo was so into the statue that he threw his hammer at it saying: “Moses, why don’t you speak?”

Artist: unknown
Where to see it: National Museum of Reggio Calabria

About: these Greek bronze statues representing two naked soldiers were only discovered in 1972. A scuba diver spotted something in the sand 200m off the beach of Riace Marina and archeologists pulled out these ancient statues (dating back to the V century BC) that were incredibly well preserved! From that moment on, they became the symbol of Calabria.

Artist: Giuseppe Sanmartino
Where to see it: Sansevero Chapel – Naples

About: it was made in 1753 by a young local artist charged to reproduce the dead body of Christ covered by a shroud. He was so good at sculpting the shroud that it actually looks like an ultra-light veil even if it’s made in marble! It’s a touching statue oozing pain and mysticism.

Perseus with the head of Medusa

About: this bronze statue was made around the half of the XV century as a decoration to be placed in the so-called “Loggia dei Lanzi”, which was the place where all the public ceremonies and events took place under the rule of the Medici Family. This violent scene represents Perseus standing on the corpse of Medusa and holding its severed head and it symbolized the power of the Medici over the republican motions.

Artist: Bernini
Where to see it: Borghese Gallery – Rome

About: this sculptural group dates back to 1622 and it represents a scene from Ovid’s Metamorphosis. Apollo was in love with the nymph Daphne but it was a one-sided love…Daphne wanted to escape the unwanted advances of Apollo, so she asked her father (a river deity) to turn her into a laurel tree. This scene represents the exact moment when Daphne’s fingers and hair start to turn into leaves.

Artist: Bernini
Where to see it: Church of Our Lady of Victory – Rome

About: it was made between 1645 and 1652 and it represents the mystical ecstasy experienced by Saint Theresa. The sculptural group is made of marble and gilded stucco and it represents Theresa lying on a cloud and ascending into heaven while an Angel is about to pierce her heart with an arrow symbolizing the divine grace.

About: it dates back to 1533 and it stands in front of the entrance of Palazzo Vecchio, on the side of David. It represents the victory of Hercules’ strength and intelligence over Cacus’ wickedness reproducing a scene taken from the mythic saga of the Twelve Labors of Hercules. Baccio Bandinelli was envious of Michelangelo and he tried so hard to surpass him, but his Hercules was always considered a cheaper imitation of David!

Laocoön and His Sons

About: it’s an ancient sculptural group made by three Greek artists from Rodhe. It represents a scene from the Aeneid: the priest Laocoön and his sons are taken by some giant sea snakes after having told the Trojans to keep the famous wooden horse out. This sculpture probably belonged to Emperor Titus, since it was found among the remains of his villa.

Artist: Edoardo Rubino
Where to see it: Park of Remembrance – Turin

About: this huge bronze statue (26m high) is located at the highest point of Maddalena Hill. It was commissioned by local businessman Giovanni Agnelli in 1928 on the occasion of the tenth anniversary of the Italian victory against the Germans during WWI. It is located in the Park of Remembrance, which was created in 1925 to commemorate the fallen soldiers. It is now one of the most scenic lookouts of Turin.

Artist: Bernini
Where to see it: Borghese Gallery – Rome

About: Bernini sculpted it in 1621 at the age of 23. This work represents a scene from Ovid’s Metamorphosis (god Pluto kidnapping Proserpina) and it is incredibly realistic (a tear on Proserpina’s cheek, Pluto’s fingers leaving signs on her skin, and many other small details). It was commissioned by Cardinal Scipione Borghese who was an art enthusiast and loved to be surrounded by sculptures made by contemporary artists.

About: this statue dates back to 1698, it is 35m high and it is visible from a great distance and from the middle of Lake Maggiore too! It represents St. Charles Borromeo who was one of the most famous bishops of Milan in the XVII century. The statue is surnamed Sancarlone, which literally means “Big St Charles”.

Artist: Ercole Rosa and Barzaghi brothers
Where to see it: Piazza Duomo – Milan

About: it was made in 1896 in honor of the late King Vittorio Emanuele II. It represents the King holding back his horse to turn back and encourage his army during the battle of S. Martin (the decisive battle of the Italian war of independence). Some recent restoration works brought to light a series of underground tunnels that are still being explored.

Artist: unknown
Where to see it: Capitoline Museums – Rome

About: this bronze statue was made between 160 and180 AD and it represents Emperor Marco Aurelio raising his hand in a gesture of peace symbolizing his generosity to the conquered people. To reinforce this message, the statue of a prisoner was located below the horse, but it was lost a long time ago.

Artist: Pietro Magni
Where to see it: Scala Square – Milan

About: it was made in 1872 on the occasion of the Second National Exhibition and it’s located in front of the La Scala Theater. It represents Leonardo standing on a high base of granite and surrounded by his pupils. Locals did not take that very seriously from the moment a local poet stated that Leonardo looked like a giant bottle of wine and the pupils looked like glasses (it’s still surnamed “one liter in four (glasses)”)!