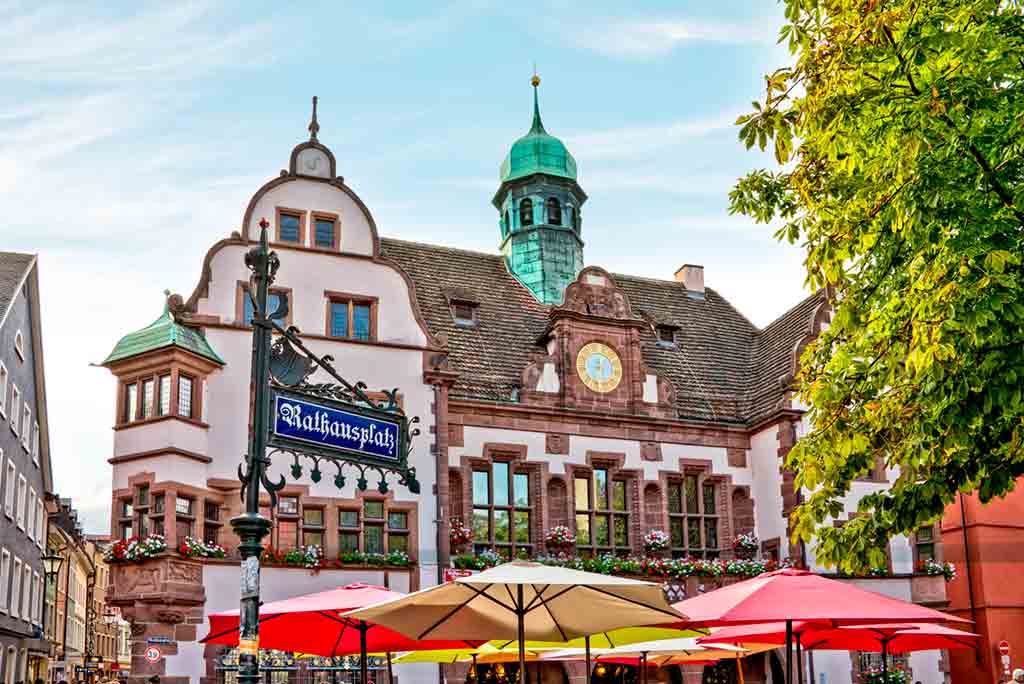 Resting on the edge of the Black Forest in the south of Germany right between the borders of Switzerland and France is the historic and charming city of Freiburg im Breisgau. Freiburg. This small university town is home to 6 universities and is often referred to as Germany’s sunshine capital because it has more sun hours than anywhere else in Germany. With all of that sun, Freiburg generates a lot of solar energy and is one of the most sustainable cities in the world. Although Freiburg is small, there is plenty to do in this unique, and green, German city!

How To Spend One Day in Freiburg, Germany

The centerpiece of Freiburg’s architectural landscape is the 13th-century Romanesque church. The church took nearly 300 years to build, but the architects spared no expense. The 116-meter tower is beautiful and the artistry of the façade is overwhelming. The 418 stone figures carved into the portal in the 1200s alone are breathtaking. You can climb to the 70 meter viewing platform for amazing views of the city below and the Black Forest.

The Freiburg Minister sits in the middle of the city’s main square, the Münsterplatz. This cobbled square is a pedestrian only zone and is steeped in history. The majority of the square was leveled in 1944 by the bombings of WWII. The Minister survived the bombings along with the Wentzingerhaus, a Baroque mansion built by Johann Christian Wentzinger in 1761.

Today the Wentzingerhaus houses a museum dedicated to the history of the city. In the Münsterplatz there is a market every day of the week except Sundays. The market is huge consisting of over 150 stalls selling everything from fresh produce to handicrafts.

One of Freiburg’s unique features is its Bächle. These waterways run through Freiburg’s Old Town and are fed by the Dreisam River. They date back to the 1200s and were used in Medieval times to do things like fight fires, and provide local trades shops with water, but they were also used as open sewers.

Luckily, today while the water isn’t drinkable, it’s not running with raw sewage, and the 15.5 kilometers of Bächle help cool the city down in the summer. But, watch your step: It’s a popular folktale that if you step in one of them you will marry a resident of Freiburg

Freiburg has 2 massive medieval city gates still standing. The Schwabentor is the younger of the 2 gates and is built as part of the city’s defense system. On the gate is a painting of the “Boy with Thorn,” and served simultaneously as a reminder to the city’s populace of the dangers of leaving the safety of the city walls as well as reminders not to stray from the path of righteousness.

On the opposite exterior is St. George slaying a dragon. The inside of the gatehouses a museum where you can visit the Zinnfigurenklause, a museum that has 10,000 handmade, miniature tin figures that depict important events in the city’s history.

From Freiburg’s Municipal Park, you can take the Schlossberg Railway to the top of a 456-meter-high peak that marks the edge of the Black Forest. The journey on Freiburg’s funicular takes a short 3 minutes. One-way tickets are 3,30 euro and a roundtrip fare is 5,50 euro.

At the top you can see the ruins of the fortified castle built nearly 1,000 years ago by the dukes of Swabian nobility. The castle was taken over by the counts of Freiburg, the Hapsburgs, and then the French in the 17th century. You can also climb the tower at the top of the Schlossberg for panoramic views of the city and surrounding areas.

The Rathausplatz is Freiburg’s prettiest square. What you’ve really come to this square to see is not one, but two town halls! Frieburg has an Old Town Hall and a New Town Hall. The Altes Rathaus or Old Town Hall, built in the Renaissance style and bright oxblood-red was constructed in the 16th century.

Above the clock, you can see the double-headed eagle of the Holy Roman Empire. The coats of arms of Freiburg’s ruling families run down the edges of the gable. You can actually go to the Altes Rathuas because it houses the city’s tourism office. You don’t have to look far for the New Town Hall, in fact, it’s right next door. The step-gabled Neues Rathaus is actually 2 Renaissance burgher houses that are joined together.

The older of the city’s 2 remaining medieval gates is the Martinstor. It can be dated to as early as 1202. A plaque on the innerside of the Martin’s Gate memorializes three widows of city councilors, Anna Wohlffartin, Catharina Stadelmennin and Margaretha Mößmerin. The women were beheaded and burnt as witches in the city in 1599. The gate can only be viewed from the outside.

This red, late Gothic house was built in the early 16th century by the Grand Treasure to the Holy Roman Emperor. It’s most notable resident was Dutch humanist Erasmus between 1529-1531. But, the house became internationally famous for it’s role in Dario Argento’s 1977 horror film, Suspiria. Today, the Whale House is home to a Sparkasse Bank branch.

Freiburg’s Markhalle is a perfect stop for lunch and home to 20 food stalls that serve up specialties from around the world. You can try Chinese, Japanese, Brazilian, Middle Eastern, South American cuisine and more. Or you can opt for something more German like Freiburg-style wurst or Frikadellen.

Cemeteries aren’t typically tourist attractions, but Freiburg’s Johann Christian Wentzinger wanted to be remembered forever and made a deal with the city. He would leave Freiburg his estate in return for his grave in the Alter Friedhof being looked after eternally.

The cemetery was in use between 1683 and 1872 but has remained almost exactly as it was and is now a natural and cultural monument. The headstones are amazing works of art ranging from the Baroque style to Neoclassicism. The high cemetery wall gives the park, which is in the middle of the city, a feeling of seclusion.

If you are visiting Freiburg during the Christmas season, you’re in for a treat! The market consists of more than 120 stands spread throughout the city. Enjoy a mug of glüwein and try dipping your own candles at the Candle Workshop or letting the kids bake cookies in the Children’s Bakery. Don’t miss the antique, wooden Ferris wheel in the middle of the Kartoffelmarkt!

Freiburg is the perfect combination of great weather, culture, and good food. Easily accessible from larger cities like Baden-Baden and Stuttgart in Germany, Colmar in France, and Basel, Switzerland the gateway to the Black Forest, is a great day trip destination!

Things to do in Heidelberg in winter.

Best Places to visit in Germany in summer.

Best Places to visit in Germany in winter.