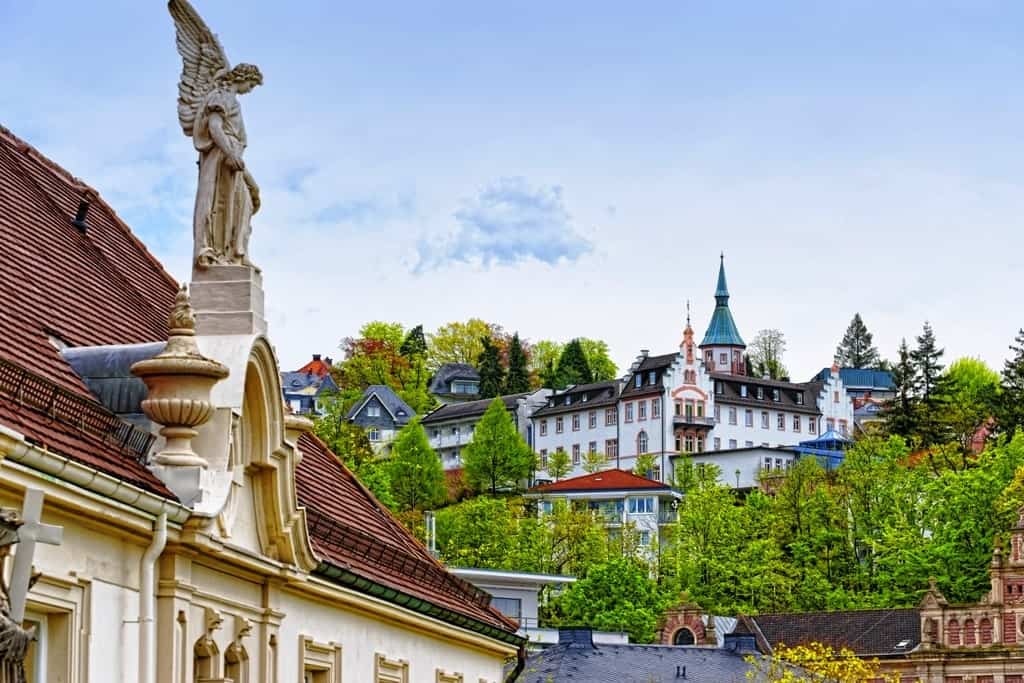 In the heart of Baden Wurttemberg, at the edge of the Black Forest in the South of Germany, is one of the most famous Spa towns of all time. In fact, it takes its name from the waters – Baden-Baden. Twice. The double name was to distinguish it from other spa town. Baden means “baths” in an older form of German.

The warm therapeutic springs were prized by the Romans, who called them simply “Aquae”- “The Waters”, or Aurelia Aquensis (Aurelia of the waters). Ruins of Roman Baths date to the reign of Emperor Caracalla (early 3rd century AD), a name that lives on in contemporary Baden Baden

The town fell into decline, but enjoyed a revival in the late 18th century. And what a revival! After serving as a refuge for the elite during the French Revolution, the Prussian Queen Louise of Mecklenberg-Strelitz came to take the waters for her health in the early 19th century, establishing this as the spa destination for people of fashion. Queen Victoria came, Kaiser Wilhelm came, and even President Obama came. Also writers like Dostoyevsky and Tolstoy, and composers like Johannes Brahms, Clara Schumann, and Richard Wagner.

Besides taking the waters, the elite needed something to do with their days and their evenings. Baden Baden provided every pleasurable and cultural diversion, from theatre, to horse racing, to a casino. Much of the glamour of Baden Baden’s peak lives on today.

The Best Spas in Baden Baden

Named for Emperor Caracalla, who eased his arthritis in these waters, this contemporary bathing complex was built in 1985. There is a vast indoor pool, outdoor pools, a beautifully tiled aromatic steam bath, and a sauna-scape. This means several saunas, of varying temperatures.

Bathing suits are worn in the pools and steam bath, but the saunas are a strictly “no textile” zone. This means you will be nude. And not single sex nude, either. It’s a good opportunity to get used to it, because the next bath we visit is entirely nude (although it has separate areas for men and women on some days). But it is so fabulous you won’t want to miss it.

Try to come to the Caracalla Baths at night! It’s magical to see the steam rising from the illuminated pools into the darkness.

Friedrichsbad is the spa of Baden Baden. Since 1877, this glamorous, multi-roomed bath has been drawing visitors from around the world. It is supremely elegant, decorated in glazed tiles with scenes of birds and landscape. The highlight is the central pool under a soaring, ornate dome. It’s like being in a museum.

This is a spa, but do not expect pampering. The traditional experience consists of a strict 17-step procedure, which includes a vigorous  8-minute scrubbing by strong and practiced hands with a brush and plain soap. This is great for the circulation, and prepares the skin to take the waters better.

If you like, end with a cream massage. This is a nice treat. The waters are therapeutic and pleasurable, but they leave the skin feeling dry.

Being nude is not as uncomfortable as you might think after you get used to it. It’s nice to not be walking around in a wet bathing suit, for one thing. And people behave very discretely in the baths. There are days when men and women use separate parts of the bath. But the central domed bath is always used by both sexes.

The Kurhaus, built in the 1820’s, is Baden Baden’s glamorous social focal point. In addition to the casino, people flock here for balls, banquets, concerts, and other gala events throughout the year, just as they have since the Kurhaus was first opened.

Right in front of the Kurhaus is the Kurgarten. This park with trees and flowerbeds is lovely for a stroll. Outdoor concerts are sometimes held here in fine weather. During the Holidays, the Kurgarten is transformed completely, to become a magical Christmas market. Come to drink mulled wine, snack on the specialties of the black forest, and buy unique quality gifts and Christmas ornaments.

The Kurhaus colonnade, running through the garden’s center, houses some of the most exclusive boutiques in Baden Baden.

Even if you do not gamble, the casino of Baden Baden is a must. It is thought the most beautiful casino in Europe. Once you see the soaring, fresco covered ceiling and the chandeliers dripping with shimmering crystal, you will not disagree. There is an admission of 5 euros. It is well worth it. (There is a smaller admission to only use slot machines, but this is in a completely different area of the Kurhaus, and modern in design.)

The Casino has an elegantly appointed bar from the later 20th C that somehow looks great with the Belle Époque décor of the casino. It has a view to the playing floor. Prices for drinks were very reasonable.

Tip: Photography is not allowed inside the casino

This grand arcade next to the Kurhaus was built in the 1840’s as part of the elegant Kurhaus complex. Corinthian column line one side, open to the park, and the other side is walled with elaborate murals of scenes of the region.

The Trinkhalle, at 90 meters long, is an ideal setting for an elegant, sheltered promenade. This was a place to meet, to see and be seen.

This is the pump room, but the waters of Baden Bade, so excellent for bathing in, are no longer thought healthy for drinking. So now it is just for a promenade.

For a more ambitious promenade, you’ll want to seek out the beautiful Lichtentaler Allee. This park, lining the river Oos for a little over 2 kilometers, was once a path between the town market and the Lichtenthal Monastery. In the middle of the 19th century, it was planted with a great variety of trees and plants, both native and exotic, and became a favorite place for longer strolls, as it is today.

If you’re hungry after exploring, join a list of famous customers, including Lizst and Tolstoy. Having a slice of Black Forest Cake at this classic café and pastry shop is a delicious Baden Baden tradition. It has been a mainstay on the Lichtentaler Strasse for decades.

Even the culture in Baden Baden is deluxe. The Faberge Museum is the only Museum in the world exclusively devoted to the opulent works of Carl Peter Faberge, jeweler to the Russian Czars. Fabulous jewelry and precious objects that recall a bygone golden age are on display. Like Baden Baden itself, the museum offers a romantic experience of time travel.

Baden Baden is an elegantly built town. Behind beautiful facades are exclusive boutiques and lovely places to have a drink. One of the loveliest streets of the center is the Sophientrasse- Sophie Street, named for Grand Duchess Sophie von Baden. This grand promenade was created in the 1830’s, on the site of the old moat which had been filled in. Running along the center of the street is walkway, almost like a very narrow park, lined on each side by chestnut trees. It is as beautiful in winter as it is in summer.

The Festspielhaus- or Festival Hall, at 2,500 seats, is one of the largest venues in all Europe for music and dance. The great of the world of classical music have performed here, like the violinist Anne-Sophie Mutter and the soprano Anna Netrebko. At the Festspielhaus, you can enjoy opera, ballet, jazz, and musical events.

The neoclassical building was once Baden Baden’s central train station, built in 1904. In 1998, it was converted into this extraordinary, state of the art performance hall.

With such an extraordinary program, you may wish to consult their site before your visit to see what will be on. https://www.festspielhaus.de/en/

From the 1st century AD, the Romans were building spas to take advantage of the thermal springs. The well preserved ruins were found in the mid-19th century. From the excavations, much was learned about Roman wall and floor heating.

This Medieval castle has everything you would expect- dungeons, winding staircases, and a fortress-like lookout on top. This was the castle of the Margraves of Baden for four centuries (11th – 15th). From the lookout, enjoy a great view of Baden Baden and of the Black Forest

There is so much to do in Baden Baden. But you can take in the sights at leisure. The center is small and easily covered on foot. Although there are plenty of diversions, Baden Baden is really about the baths. This is truly a classic spa town – a place to slow down and recharge. All of the activities are built around taking the waters. And that truly is the best way to enjoy it. Enjoy the baths, and let yourself slow down to Baden Baden’s relaxed pace.

Things to do in Heidelberg

One day in Freiburg

Most beautiful medieval towns in Germany

The best places to visit in Germany in summer

The best places to visit in Germany in winter.