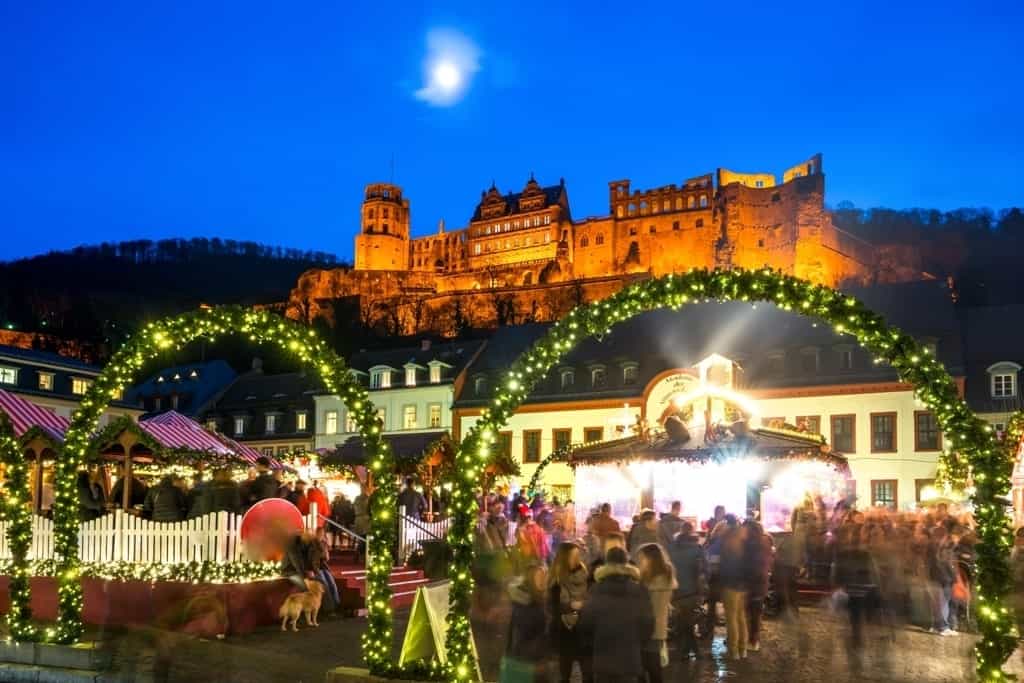 Heidelberg isn’t a huge city like Berlin or Frankfurt, but it’s one of southern Germany’s most charming destinations. Frequented by writers and intellectuals in the 19th century, overlooked by a 13th century castle, and home to Germany’s oldest university, and the world’s longest pedestrian shopping street, Heidelberg is a wonderful place to visit any time of the year. Winter, especially while the Christmas market is running, is a magical time in this romantic city on the Neckar River.

Heidelberg in Winter: What to Do and See

The red sandstone castle is the cherry-on-top of this already remarkable city and is one of the most famous landmarks in Germany. The oldest parts of the castle were constructed as a 13th-century fortress and in the 15th and 16th centuries, it was expanded into a beautiful palace to house Heidelberg’s Prince-Electors.

Take a tour to learn about the castle’s history and walk through the pharmacy museum. Look out over the castle’s terrace for sweeping views of Heidelberg and the Neckar River below. Be sure not to miss the giant wine barrel, which is the largest in the world! You don’t want to miss the rich history and stunning Renaissance architecture of Schloss Heidelberg.

The cobbled streets of the Old Town are a great place to start your visit. The main street, or Haupstraße, is the world’s longest pedestrian shopping street and is lined with trendy boutiques, chain stores, cafes, and restaurants.

Along the Haupstraße you’ll find the Rathaus, or Town Hall, the Hercules fountain in the Marktplatz where petty criminals were chained during medieval times, and the University Prison, but more on that later! The Altstadt is especially magical during the winter months whether glittering with Christmas lights and filled with the scent of glüwein or draped in a blanket of snow.

Each year from 25 November through 22 December, Heidelberg’s Christmas market takes over the city, transforming the Old Town into a real-life fairytale. Spread out across the squares of the Old Town pedestrian area starting at Bismarckplatz and continuing down to Anatomiegarten, Universitätsplatz which has a big, beautiful carousel, Marktplatz and Kornmarkt, the most charming of Heidelberg’s squares.

The Winter Woods (Winterwäldchen) on the Kornmarkt is an enchanting setup of lit up trees. There is even a mini-train the kids can ride through the trees.  Beneath the castle, on Karlsplatz square, you find the ‘Christmas on Ice’ ice rink where you can lace up and take a couple of laps around the ice.

Stalls and the ice rink open daily at 11:00 and close around 21:00, staying open a bit later on Saturdays. To avoid the crowds, head to the markets when they open. Around 18:00 they get very crowded!

Stop for a regional favorite–Flammkuchen. Sort of like a very thin crust pizza the hand-rolled dough is topped with crème fraîche, onions, and bacon and then cooked in a blazing wood-fired oven. To go along with your flammkuchen, don’t forget to get a nice, piping hot mug (or three) of glüwein to keep warm as the temperatures drop.

Keep an eye out for less-common but infinitely better Weißglüwein. For just one euro more you can opt for a shot of rum or Jägermeister in your glüwein to really warm you up! For the non-drinkers and kids, try the Kinderpunsch, a hot, spiced fruit juice which is also delightfully satisfying on a crisp, cold day.

Heidelberg’s Karl Theodor Bridge, more commonly known as the Old Bridge, spans the Neckar River between the Altstadt and the Neuenheim district. The sandstone bridge as you see it today was built by Prince Karl Theodor in the 18th century. Today’s bridge is the 9th bridge to have been built in this location since the 1200’s, each being subsequently destroyed. On the Altstadt side you can see the medieval Bridge Gate which is part of the old city wall.

While you’re walking the Old Bridge, don’t miss the Heidelberg Bridge Monkey. This bronze monkey was sculpted by Professor Gernot Rumpf and was installed in 1979, but there has been a bridge monkey in Heidelberg as far back as the 15th century.

The story goes that the monkey was meant to remind those who crossed the bridge to look over their shoulder at where they came from. Whether the person lived in or out of the city, it was a reminder that neither was better than the other. The monkey is also said to be good luck—rubbing the mirror will bring you wealth and rubbing the fingers will ensure your return to Heidelberg.

Go on the Philosopher’s Walk

The Philosopher’s Walk, or Philosophenweg, is a pathway on the north side of the Neckar River that runs along Saints Mountain. University philosophers used to traverse the route pondering life’s most important questions. Today, you’ll find university students enjoying each other’s company. One of the best things about the Philosophenweg is the phenomenal views of the Old Town from across the river.

Across the river from Heidelberg Castle, on the ‘Holy Mountain’ hillside you can find the Thingstätte tucked away in a forested area along the route of the Philosophenweg. The 20,000-seat open-air amphitheater was opened by the Nazis in 1935 as a place for people to gather for theater and propaganda events. The site is a little eerie, but today it functions as a public park.

Heidelberg University was founded upon the instruction of Pope Urban VI in 1386. It was the third university in the Holy Roman Empire after Prague and Vienna and is the oldest university in Germany, and among the oldest in all of Europe. Since its inception, the institution has churned out eight Nobel Prize winners cementing its position as a leading university.

No visit to Heidelberg would be complete without a visit to this important historic institution. Take a tour of the Alte Aula (Old Hall), the University Museum, and the Student Prison. The Student Prison is a quick, but interesting stop. Built in 1778, it’s was originally designed to hold students convicted of petty crimes. Sentences kept transgressors there for no more than 2 weeks, but the cell walls are decorated with the art of those who were incarcerated there.

Most of Heidelberg’s sights are outdoors, but the Palatinate Museum is a great place to escape the cold of winter. Located in the 18th-century Palais Morass, the museum is filled with paintings, sculptures, and applied arts. You can also see impressive archaeology that represents the history of the Lower Neckar Valley. Along with the many impressive exhibits, the rooms are furnished in the 18th and 19th century styles.

Heidelberg came out of WWII with little structural damage. But, there are still some ghosts of the war that are worth visiting. Synagogue Square used to be the site of a synagogue, but it was burned down by the Nazi’s during Kristallnacht in 1938. Today the white marble paving stones mark where the walls of the building once stood. Gray granite represents the windows and entrance. Within the strikingly simple white boarder stand 12 sandstone cubes which represent the pews and the 12 tribes of Israel.

Things to do in Germany in winter

Things to do in Frankfurt in winter

Things to do in Baden Baden

Things to do in Freiburg